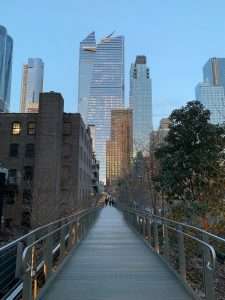 With a single objective–to see the Hilma af Klint: Paintings for the Future at the Guggeneim (on through April 23)–I booked a trip to New York City and let the rest of the chips fall where they would. This might be my new favorite way to travel, because inevitably, between booking flights and a place to stay, and of course letting a few people know you’ll be coming over, an onslaught of recommendations ensues: exhibitions, studios, restaurants, bars, openings, and so forth. It can be overwhelming, because it’s just not possible (nor actually recommended) to see everything. Your brain just turns to slime if you try it, and you don’t have any fun stressing about getting everywhere anyway.

I did have an amazing couple of days in New York this past week, though, and here are some highlights!

On Tuesday I flew in, grateful for mostly smooth travels despite government shutdown shenanigans having been going on so long. To get there early, I had to board a 5am flight, so I was a little sleep-deprived, but nonetheless so stoked to be in the city. The only thing that held me up was the weather, so I got into New York City around 3:30 and immediately busted my ass over to Chelsea to stop by PACE and meet up with a friend, and to catch Leah Guadagnoli: Soft Violence at Asya Geisberg (on through February 16), which is absolutely stunning. 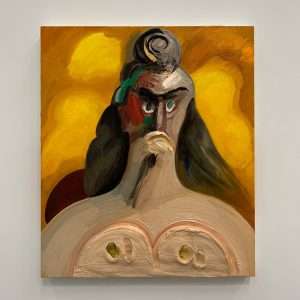 I then swooped down the High Line as the light started to fade, to catch Dana Schutz: Imagine Me and You (on through February 23)  which was also mind-blowing, and I was only sad that they were closing up for the night and I couldn’t spend more time there. I especially loved the small portrait of a woman with the paint sculpted so heavily she was in relief, her breasts formed by these viscerally, casually scooped and plucked pockets of paint, so tender and menacing at the same time. GAH, so good. 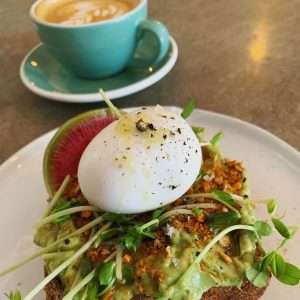 Wednesday was chock full — a morning to Brooklyn for coffee and an avocado toast at Stone Fruit Espresso that rivaled the best I’ve ever had (I’m looking at you, Honeycomb & Co.) with my friend, artist Mark Joshua Epstein, who was opening up his studio that day for an arty event and we were getting some things sorted. Mark and I are also working a curatorial project, so we had plenty to chat about over coffee, before I swung back into Midtown and got my Guggenheim fix. 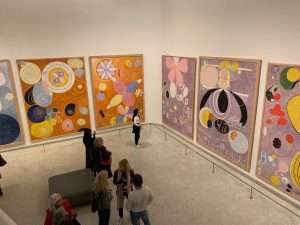 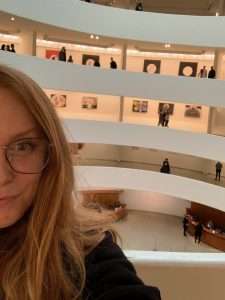 HILMA AF. That woman was a powerhouse of spirit-channeling super energies. A couple pieces, like one of the triad of Altarpiece paintings, I had seen in a show in Dublin about a year and a half ago. But it was wonderful to see it reunited with its siblings. I also think the Guggenheim is the most spectacular venue for her work — it’s a dialogue with the architecture itself in the spiraling and movement she was channeling in her work. I was fortunate enough to be there on a day when the crowds were not too bad, and it was easy to back up and see everything. At least with this exhibition in particular, I didn’t mind being a little bit dizzy at the end. 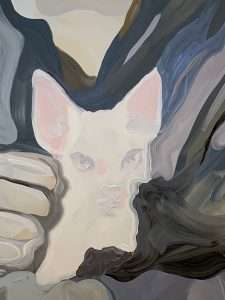 I decided to walk south and pass by Simon Lee Gallery, where the fabulous painter Clare Woods shows recent paintings that will be on view through March 2nd in a show titled Password Revolt. I became obsessed with her treatment of ears, both human and feline alike.

A generally arty evening back in Brooklyn squared me up for a final full day of shows on Thursday–after some much-needed zzz’s!

It was raining most of the day on Thursday, so I had to buy an umbrella, which my Wisconsin-raised self was sort of opposed to on principle. Rain? In January!!? Toughen up! Alas, I caved. I was going to be doing a lot more walking.

I bopped over to Queens to visit with the director of QueenSpace, an invitational residency program that hosts three artists at a time in in a wonderful, quirky corner building chock full of studio space. I was fortunate enough to take a tour of the spaces and to meet one of the current artists in residence, Cheryl Pope, whose work sticks in my mind as some of the earliest influences on my novice curatorial brain a few years back (not that I’m saying I won’t forever be a novice in some respects). It was fantastic to see some recent textile work on the wall, getting prepped for framing. 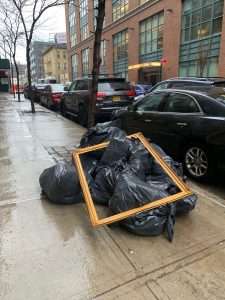 In the meantime, the neighborhood was finding other things to frame…

Next, a hop down to the Brooklyn Museum, where the spectacular exhibition Soul of a Nation: Art in the Age of Black Power (closes soon! February 3) brought together some real heavyweights in one amazing venue. Sam Gilliam, Jack Whitten, Wadsworth Jarrell and so many more — it was phenomenal. 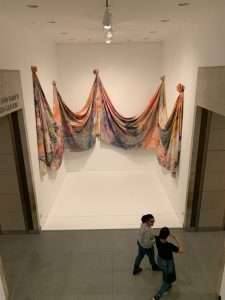 Sam Gilliam in Soul of Nation at the Brooklyn Museum

After that, it was back to Manhattan to check out some more painting shows on the Lower East Side before meeting up with a friend of mine who has lived in New York almost as long as I’ve known her, but we’ve never actually met up there!

Stopped through the absolutely fantastic EJ Hauser show, Barn Spirits (on through Feb. 3) at Derek Eller, which is 100% essential to see in person, because these are tricky, beautiful paintings that play at being flat, but they are anything but. They are painters’ paintings — layers of oil and stunning, subtle depth. The underpainting and a peek around those edges is to die for.

A two-person works on paper show at Massey Klein, The End and the Beginning: Alice Gibney and Sarah Irvin (thru Feb. 17) is a subtly powerful look at the relationship between life and death. Sarah Irvin’s work in particular struck a chord with me, using record-keeping and visual logs to chart time passing and regular events like breastfeeding or the swaying of a rocking chair. There were a couple more wonderful shows, Cristina BanBan: 24-hour Booth (thru Feb. 24) at 1969 Gallery, and Benjamin King at Freight + Volume (which I caught just prior to the opening, and is on thru Feb. 24). 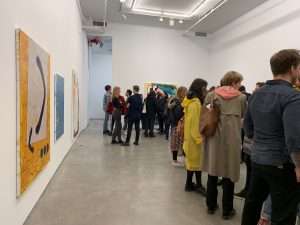 I’ve followed Cristina’s work since she was featured on Young Space almost two years ago, and whose work has evolved and matured so rapidly since. These are large and joyous paintings, calm and energetic at the same time, bringing to mind the vibrant city in the summertime — short shorts, breezeless humid days, and lazy afternoons with friends.

A quick stop at Vanessa’s Dumpling House (and a peek in the unexpectedly crazy bathroom, harkening back to a bygone NYC) and then a couple drinks with my friend at The Flower Shop preceded a quick walk over to SoHo for the opening of Rasmus Nilausen’s solo exhibition Eye Dialect at Team Gallery (on thru March 2) — a show of paintings I was fairly obsessed with, and of course could hardly see any of, but would absolutely recommend going in to get a closer look at. 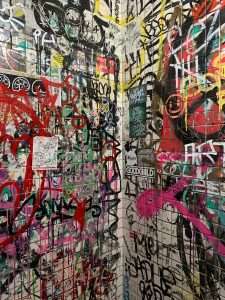 The next morning, bright and early, I was back to La Guardia, tired and stuck in the middle of the minor air controller sick-call-in fiasco that was allegedly the last straw in President Trump’s ridiculous shutdown, because by the time I was home that evening, the government had (at least temporarily) opened back up. I’m grateful to the TSA agents and other government officials who kept things running smoothly over the past month despite no pay.

A full day of lingering in airports gave me plenty of time to reflect on how cool it is and how lucky I am to be able to spend some two-or-so days in New York like that, and feel so energized. 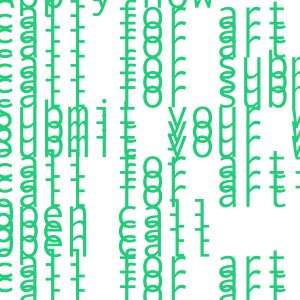 An Artist’s Guide to Navigating Calls for Art
You've probably heard the phrase "pay to play," or maybe you've seen…