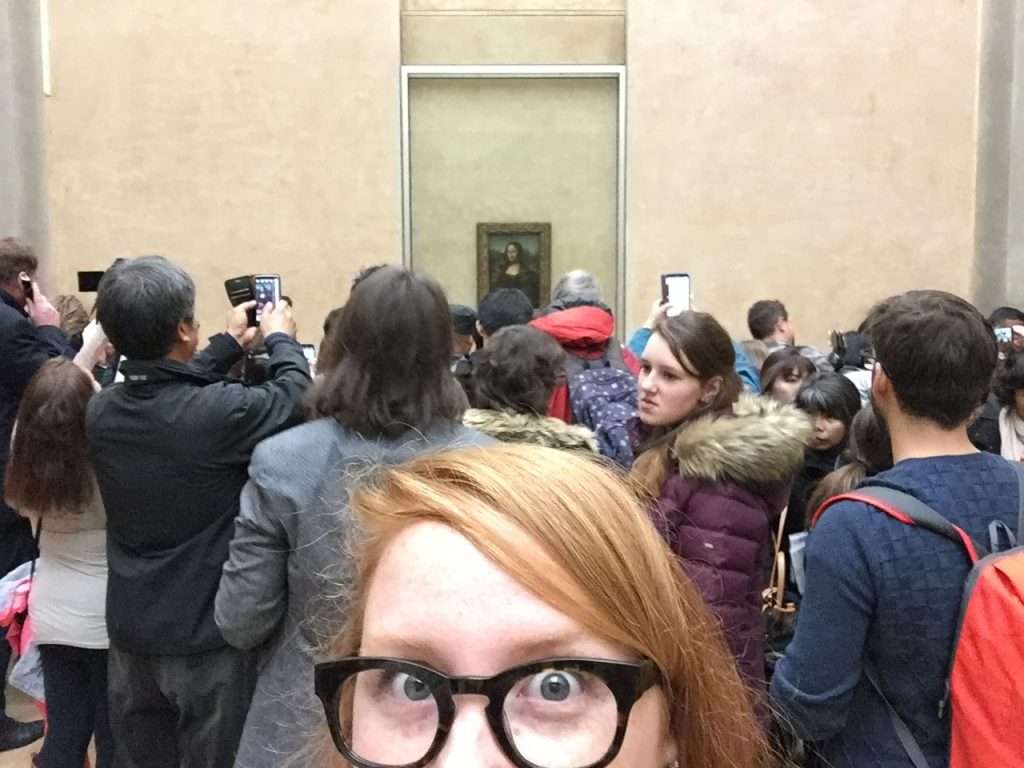 Visiting the Mona Lisa in 2015

Peering through glass: art, object, and experience in the Internet age

What gets us off our screen and into an environment, or in front of an artwork or object? Perhaps the reasons to do so are tied to social experience–and social capital (which I’ll touch on in a bit) as much as–if not more than–the experience itself. We need to communicate with one another about it from time to time: we were there; we saw that object; we took our own photo of it; we talked about this and that thing. We do it quickly, and move onto the next object and the next photo without much thought, wherein even in “real life” we move at a pace that is acutely tied to how quickly information travels online. Don’t get me started on those Instagrammable pop-ups that seem to be everywhere.

Earlier this week, I was chatting with Lucas Spivey, who was swinging through Wisconsin with his nomadic arts/business Culture Hustlers podcast/mobile incubator, about nomadism and using the Internet to share/do creative work. What I’m doing right now–professionally, creatively, in my spare time–would not be possible without the Internet; it has pervaded every angle of my daily life and work, and in fact, is the reason my work can exist at all. It’s also infinitely frustrating to know about so much, but not be able to be everywhere at once. Lucas asked if the object actually matters anymore, now that we exist online, and I thought, with rather drunken confidence, no! I mean, online, you’re able to share images (pro documentation, 360 panos, live videos, woo!!) of whatever you want, and make it look as great as everyone else’s, so who cares if no one can see it in real life? The point is that it exists, and because there are images that suggest it exists, then it must exist, even if no one can get there to actually see it! Right?

In Madison, WI, two days later, in another chat about photography with maverick photography curator and organizer Andy Adams of FlakPhoto, I became less confident about my stance that the Internet had made physical objects pointless, even though we were talking about a medium that has exploded in the digital age. Suddenly, almost overnight, with the advent of not only digital cameras, but cameras in our phones, everyone became a photographer. But because there is a lively culture of photo books or zines, and of course photography exhibitions and collections, the idea of the image-object and image-as-art persists.

A few hours after that, I was in Milwaukee for a gallery opening, and a large group of artists and I were grousing about how being able to view as much of an artist’s work as you could possibly want on a platform like Instagram can have a negative effect: it wears you out before you’ve even begun! If an artist posts images online of everything they make, at some point, you’ve seen so much of it online that there’s hardly any impetus to see it in the real world.

That’s where social capital comes in also. In the era of social media, our very sense of self is determined by likes and comments on posts we share. Social maneuvering is certainly as old as humanity itself, but with the Internet we do it faster, and with algorithmic finesse! We not only strive for “real experience” for personal improvement or knowledge, or of purely social interaction for the sake of community (of course at times we do; we are human); we also strive for attention, which is a form of currency. We need others to know that we have been somewhere or done something. We ate that amazing sushi; we touched the nose of that statue; we met Jerry Saltz at the Met. No pic, didn’t happen!

A photo of the Mona Lisa, even a shitty one, is a way of proving you made the effort to get there and be one of those who has seen it in person. And you prove it to your social network and to those whom a visit to the Louvre denotes you are a worldly, experienced person of culture. And now you also understand what that experience is like, as the room and the phones held aloft in the Louvre are the modern experience of the Mona Lisa. If you can see a better image of it online, why go? There are still these underlying ideas of treasure, of pilgrimage, of truth-seeking (the real thing), which all boil down to wanting to connect with something or someone. The “pure” (read: traditionally accepted) way of viewing the Mona Lisa might entail, for example, sitting in a quiet room with the painting quite close to you, out in the open air rather than behind a huge, glass vitrine, and being able to really question her, and to appreciate who brought her into existence.

The same goes for an exhibition at [insert any gallery here]. We seem to view the entire contemporary art world through pieces of glass — our screens. Are these not yet another kind of vitrine that both allows for the objects to be on display, yet keeps us separate from them? We still require and deeply desire experience: to connect with something intimately, to have something influence us in ways we only pick up on later. We have to go places, see things, and be in the moment, in order to do that.

In all of my conversations this week, which were, of course, part of a continuing effort to do exactly that, at some point the conversation swung to the idea of experience, or of people gathering and exchanging ideas about it. While a part of me still leans toward the object mattering less, I think I need to reframe it as not that it matters less, but that we are understanding experience differently, and there is still a desire (need) for experience, and physical objects or locations still bring that (enter VR, I suppose). But the Internet has brought a surge of interest in analog forms of communication and art — vinyl LPs, film cameras (although even those are totally niche) as everything else seems to be disappearing into the cloud, after 24 hours, or decided for us via an algorithm.

But I began to feel really uneasy about the assumption I’d made about the insignificance of the physical object in the digital era, because it felt like I had accepted that it didn’t matter if I didn’t get to actually see the Hilma af Klint show at Guggenheim, for example, because I’ve seen pictures of it on Instagram, so that’s good enough. Wait, what? Hilma af Klint is one of the art world’s best-kept secrets, a phenomenal painter–a woman–who was painting abstract work as early as 1906–before Mondrian or Kandinsky. Much of her work is large in scale and incredibly detailed. Does-not-com-pute. It must be experienced in person. Incidentally, this week, an AI-generated painting sold for $432K, further reinforcing the case that the object still obviously matters.

Because all of this has been swirling in my head for the past several days, it’s interesting to parse out this idea of ‘object’ and ‘experience’ as things that the Internet has separated, when they had been inextricably linked forever before that. John Dewey wrote in ‘Art and Experience’ (1934): “Experience occurs continuously, because the interaction of live creature and environing conditions is involved in the very process of living. […] Things are experienced but not in such a way that they are composed into an experience. There is distraction and dispersion; what we observe and what we think, what we desire and what we get, are at odds with each other. […] In contrast with such experience, we have an experience when the material experienced runs its course to fulfillment. Then and then only is it integrated within and demarcated in the general stream of experience from other experiences. A piece of work is finished in a way that is satisfactory; a problem receives its solution; a game is played through […] Experience in this vital sense is defined by those situations and episodes that we spontaneously refer to as being ‘real experiences’; those things of which we say in recalling them, ‘that was an experience.'”

So, you can experience “petting a cat” at a VR cat cafe, let’s just say, by having your senses tricked/convinced into believing you are, even if the image you’re seeing is a simulation, and you may be touching something that is only a piece of textile made to feel like fur. The experience, however, is of the VR, not what it is simulating (or is it? oh, Baudrillard).

Sadly, I think viewing art online has become like a VR cat cafe. It looks like art, it talks like art, and you can convince yourself you’ve seen and experienced it without ever having been there, but in fact you have experienced scrolling through Instagram or reading an article about it. I’m troubled by this, but also fascinated by it; I play into this entirely via my own online platform, and yet I fight against it constantly by doing remote exhibitions where only the locals really actually find an experience, and where we can talk about it and learn about it in a way that isn’t possible online–even when you’re deliberately trying.

You may be able to see a Hilma af Klint painting (or a Le Corbusier building, or an Alpine vista, etc.) on Instagram, but you won’t understand its scale, context, or history in remotely the same way; it won’t be an experience. Just like you cannot actually taste an amazing salmon dish if you’re not actually eating it. That is why travel and meeting people is still so important, and everything online is second. The Internet is a conduit. So I find, increasingly, when it comes to art especially, that I’m/we’re only in real danger if we forget that it is a tool or a facilitator of real experience, and not the experience itself. 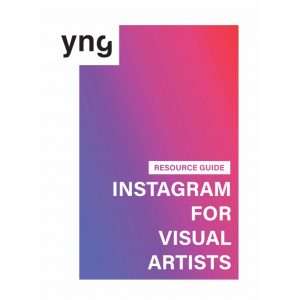 Instagram Guide for Artists + SLEEK Magazine
It's been a busy couple of weeks, and I'm excited to have…