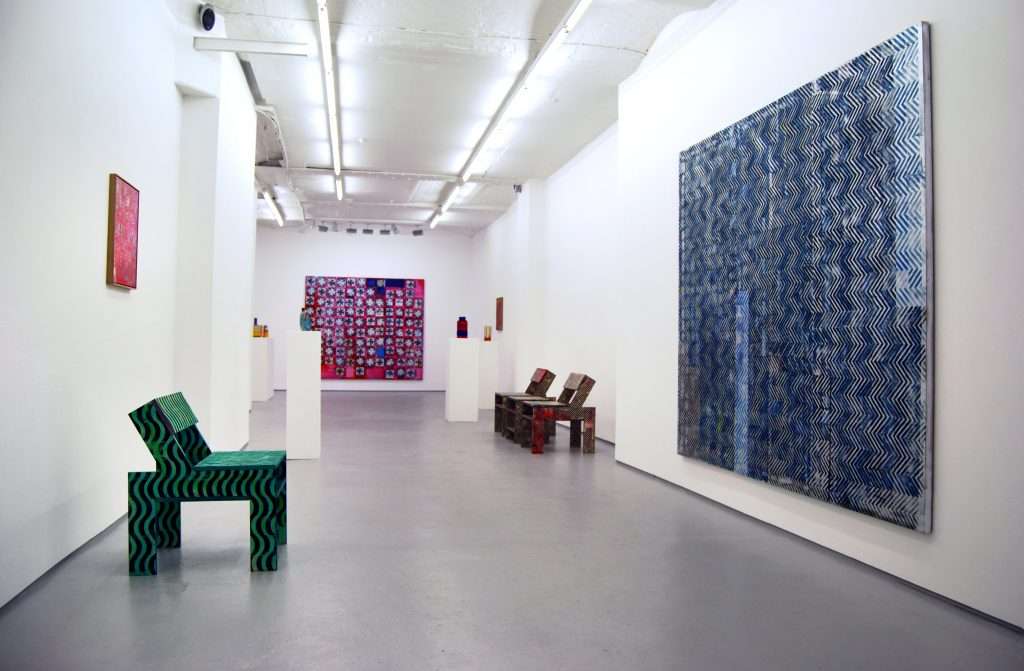 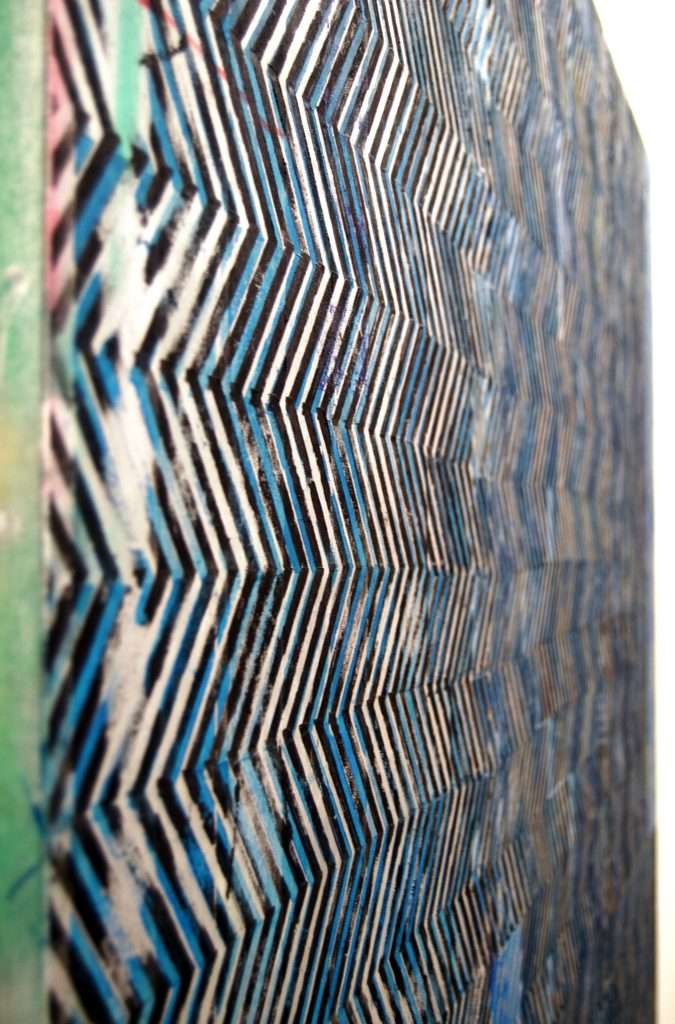 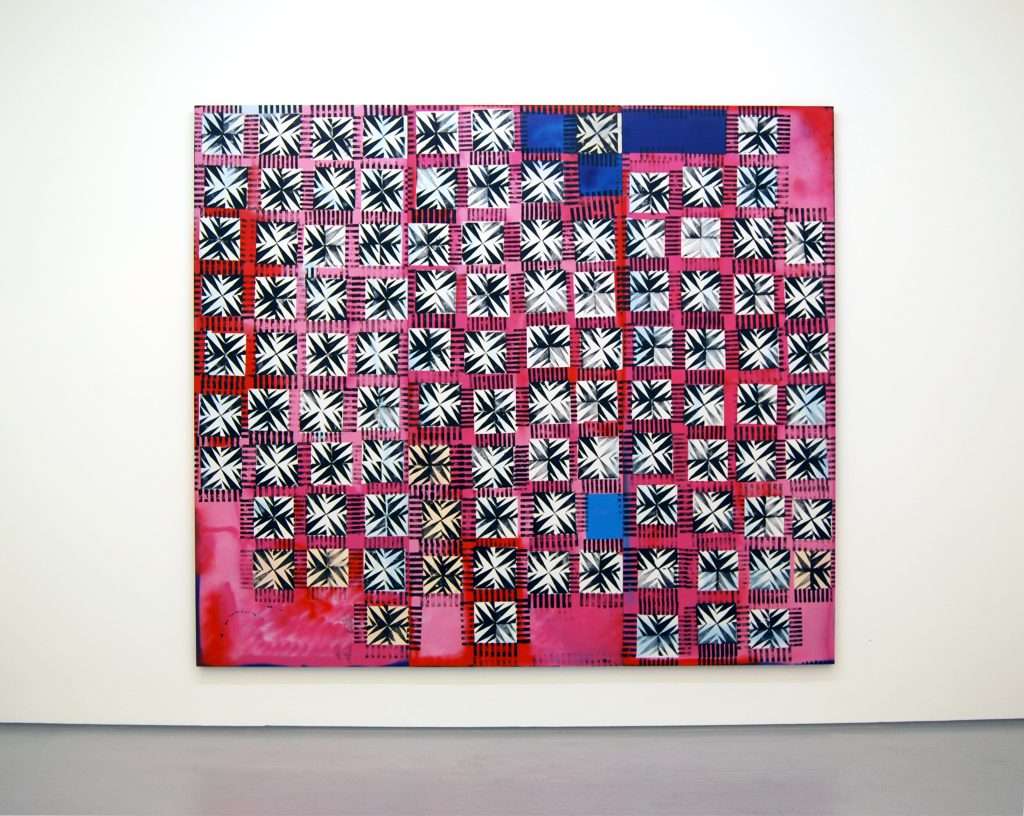 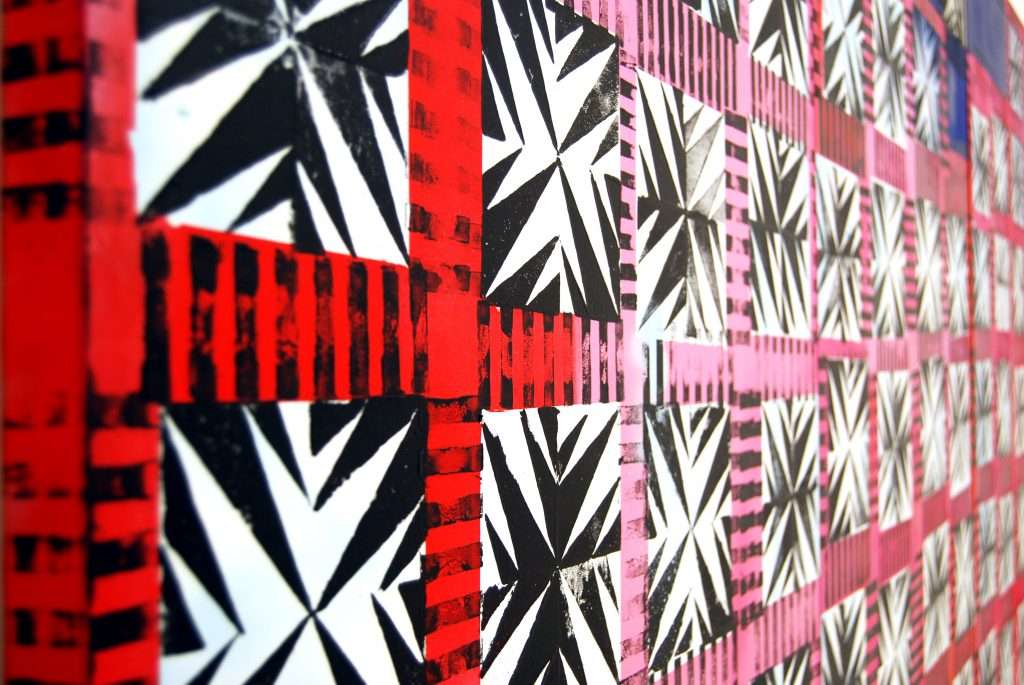 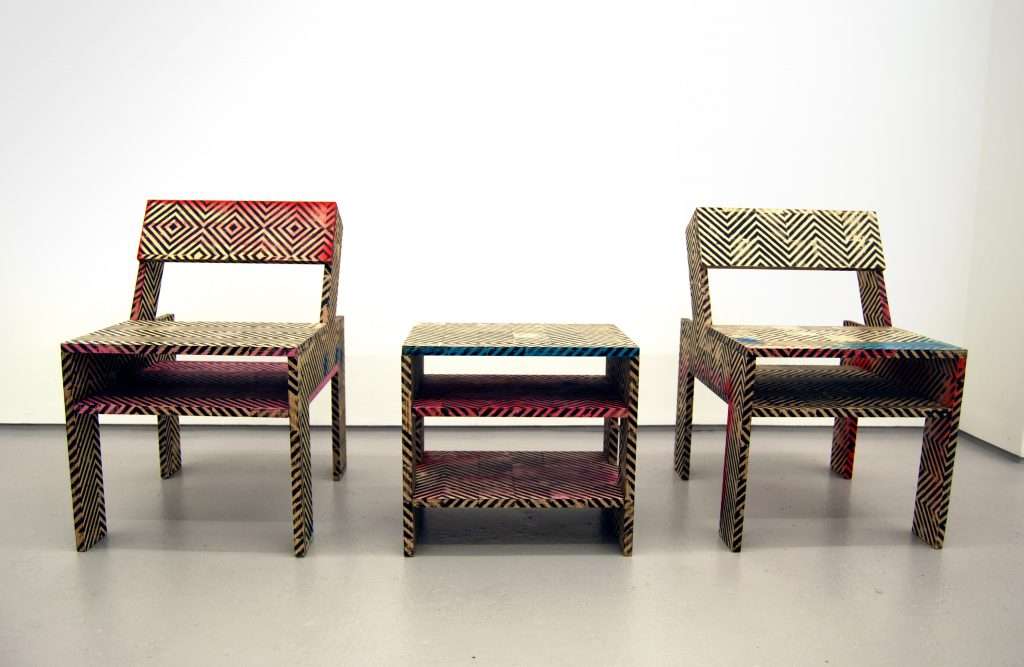 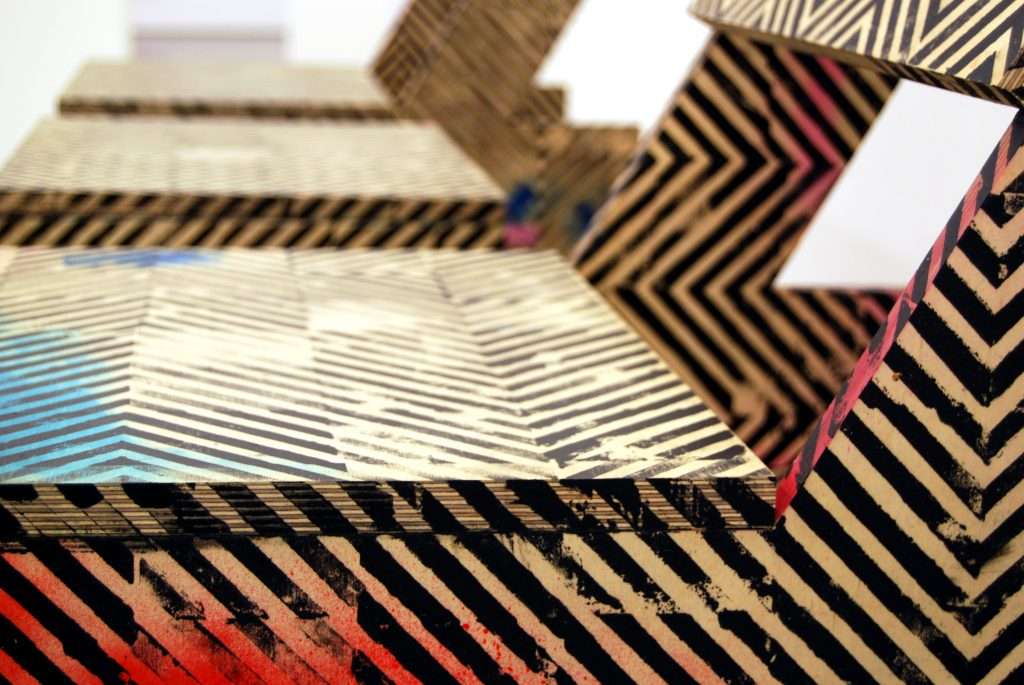 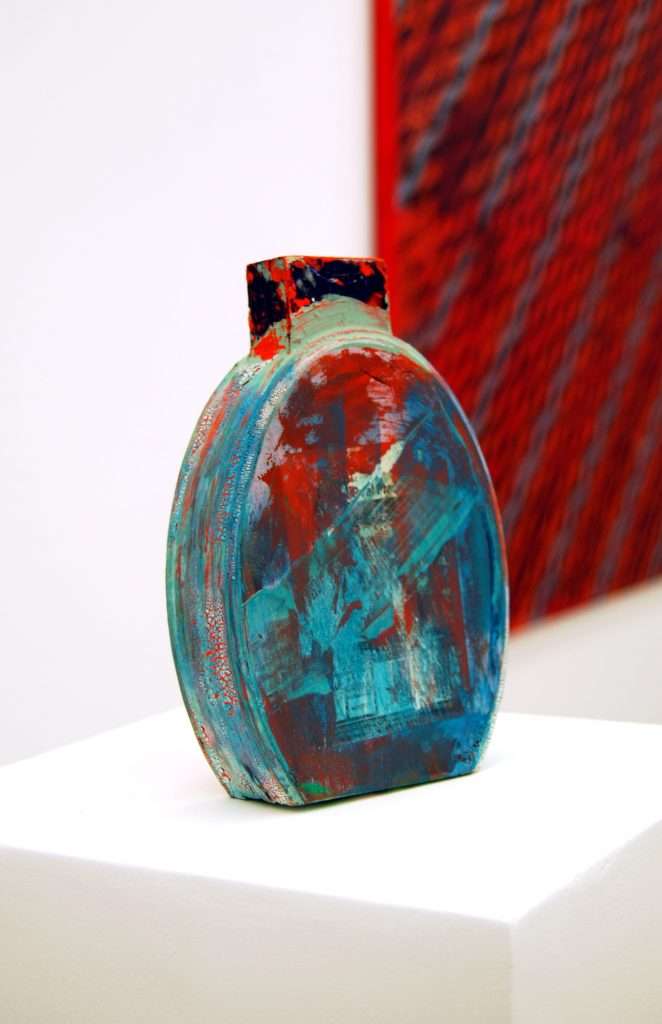 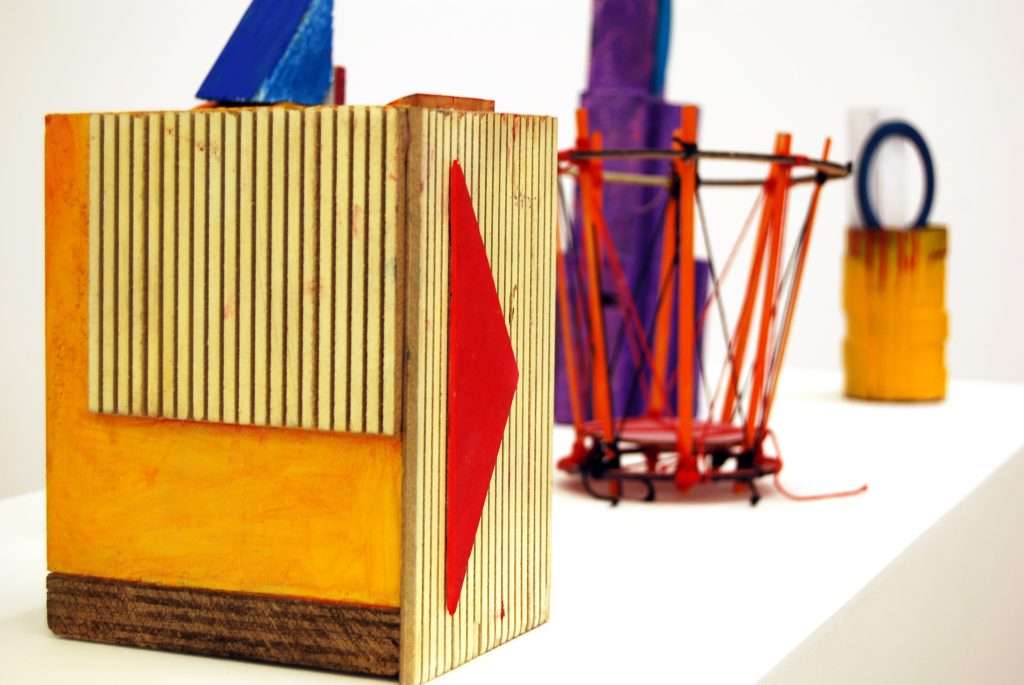 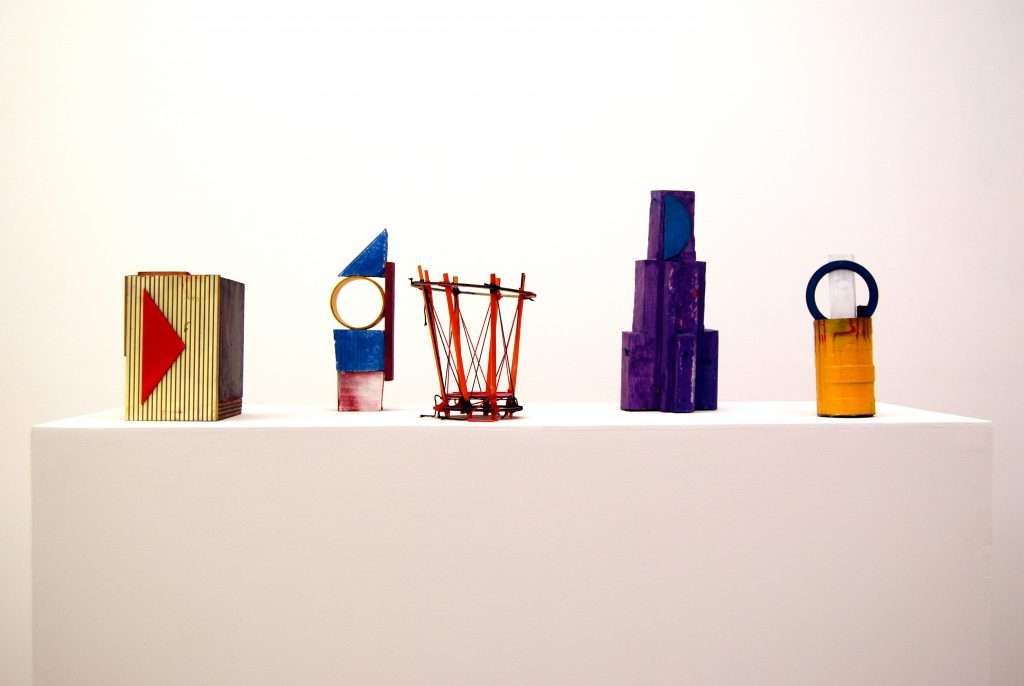 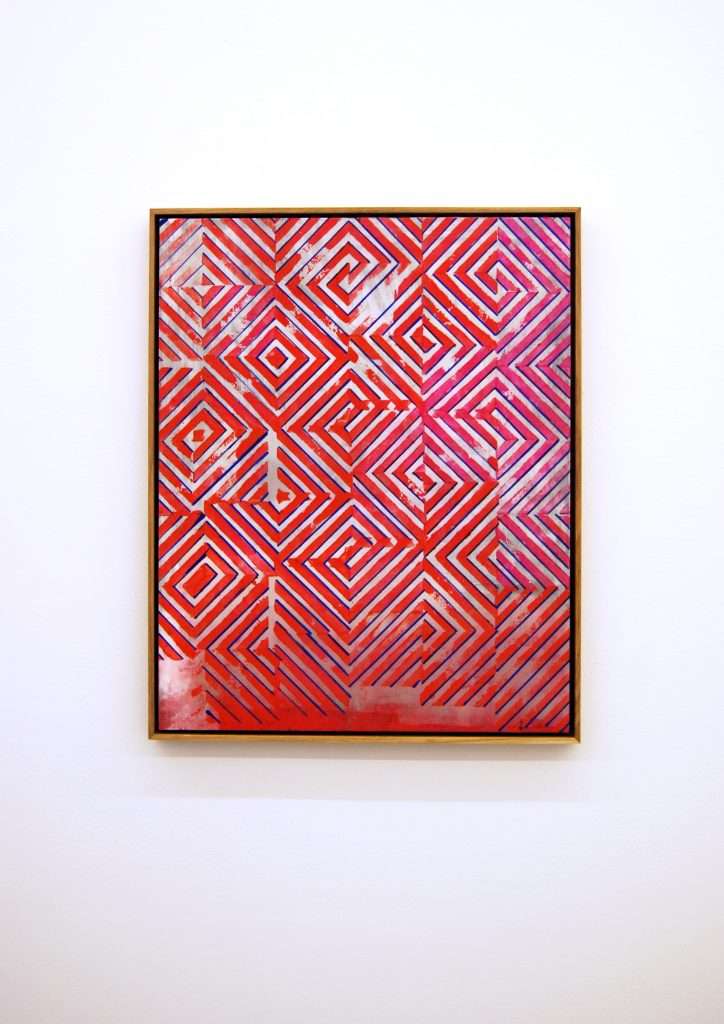 I’m not even fully in the the gallery, hanging over the first step down, when Dominic Beattie’s large painting ‘Four String’ grabs hold of my eyes. I don’t think they recover their own free will until I emerge, blinking at the traffic on New Cavendish Street, an hour later.

It’s a funny gallery, Fold; a long, narrow basement space that plays with your sense of scale, barging in then running away from you. Strip-lighting colludes with Beattie’s countless chevrons to propel my eyes to the far end of the room. There’s a lot to look at here: Paintings, sculpture, furniture? It’s Terence Conran doused in Red Bull. I’m pinballed around for five minutes, eventually finding myself spat out, back at the beginning, with only the sounds of the gallery manager, Amelie, tapping away on her keyboard.

‘Four String’ demands I take a closer look. I puzzle over Beattie’s technique, my face inches from the panel but the ink keeps me guessing. Sharp edges here, looser ones there. I give up and email the artist later to confirm his patterns are actually printed with carved lino-blocks. It’s a process Beattie first considered last autumn and it’s made an immediate impact on his work, guiding him away from his neater, more clinical works of 2015 when he collaged photocopied strips of geometrical designs. Any break-up in those earlier works looked digital and abrupt. Here, the many variables of printing under the weight and guidance of the human hand has introduced the wonderful uncertainty of nature.

Twinkling in my peripheral vision at the opposite end of the room is ‘Cross and Crown’, inspired by a quilting video tutorial which Beattie followed step-by-step, substituting his own materials to build an abstract image. It marks a subtle but profound shift from the zig-zagging influence of op-art to a more ornate decoration, a definitive nod to textile design. And yet, spray-paint scribbles are afforded a breath, left unprinted in corners to declare, “See? I’m still a painting!”

I go and dip my head in the shallow waters of ‘2 Track’ which has coaxed me away from the flame-grilled menace sizzling within ‘Rattlesnake Shake’. It dawns on me that these two paintings are the first to weave any narrative in my mind; a dead man in the desert, cowboy boots, spurs still twitching in the breeze. The paintings are all abstract, of course, but these two seem eager to play.

Parable complete and nourished with the predictable warning that I exercise caution in life (Netflix version – drug deals in the desert end badly), I rise from my ‘Dazzle Chair’. It’s fine, I checked with Amelie first. They’re solid and surprisingly comfortable, the backrest reclining to a well-considered degree. This is serious, functional sitting gear. Amelie has proof, informing me that it’s often used for meeting areas on the Fold stand at art fairs.

Dotted around the gallery, sometimes in groups, are a selection of Beattie’s ‘Ersatz Ceramics’, constructed from unemployed objects up to no good in his studio. Most are crudely blocked together, wooden vessels happy to never be given responsibility for more than their own mass. Others, such as #11, are so intricate I’d believe anyone telling me it’s on loan from a textiles factory. There is craftsmanship on display here. Am I too generous? #6 convinces me that Beattie’s taught himself wood-turning until I spy a ‘Made in China’ label charmingly appended to its abdomen.

Beattie is a maker, enthused by a build, a process. He tells me “the quilt-maker was very structured and I’m not” which surprises me and I wonder if his friends would agree with that assessment. It’s a trait sometimes best judged through others’ eyes, from a revelatory glimpse of an immaculate wardrobe, for example. If he’s right, then maybe having discipline imposed on him is a welcome relief. I sense this methodology has presented the artist with the keys to a whole network of creative doors he can now open and explore.

I thank Amelie and emerge, blinking at the traffic on New Cavendish Street, patterns still crackling in my thoughts. I head towards Goodge Street tube, double-checking in shop-windows that I don’t have Beattie’s chevrons printed on my bum.

Sweet continues until the 14th July.

Nick Maroussas is an artist and writer based in London. All images courtesy of Maroussas. 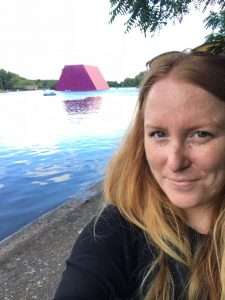 UK recap!
Trying to sum up travel is futile, really. Of course, I took…