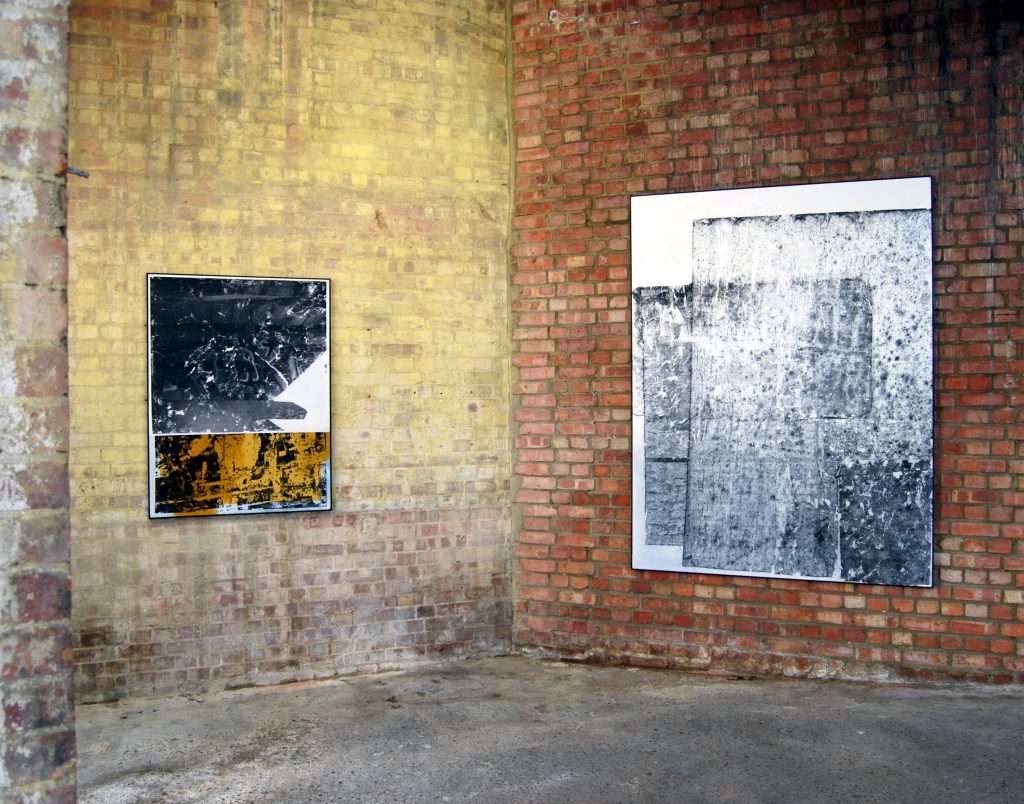 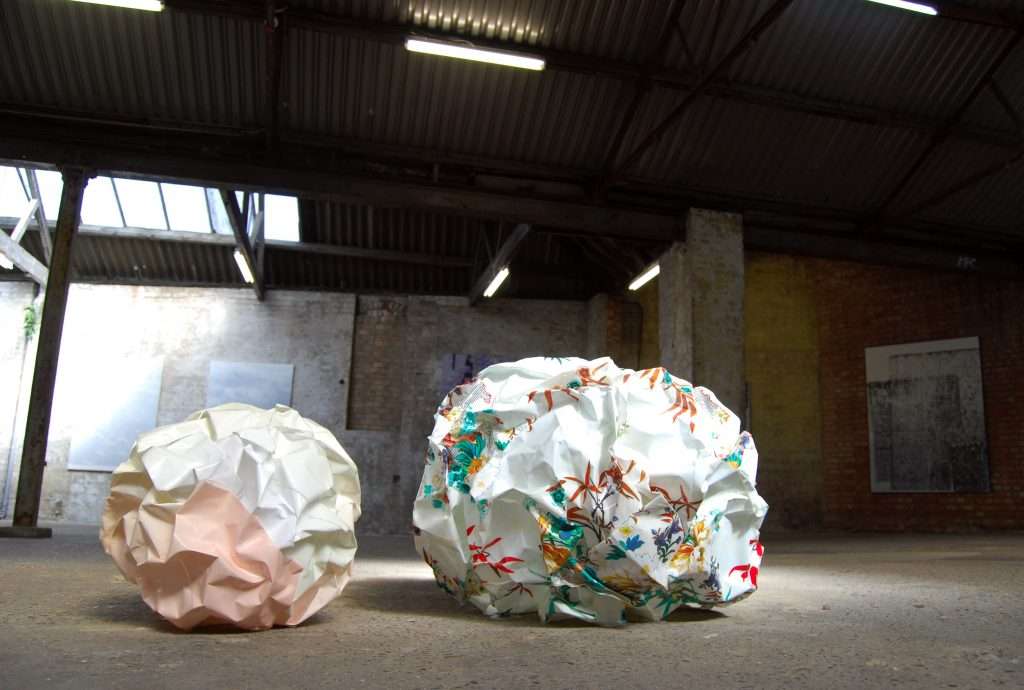 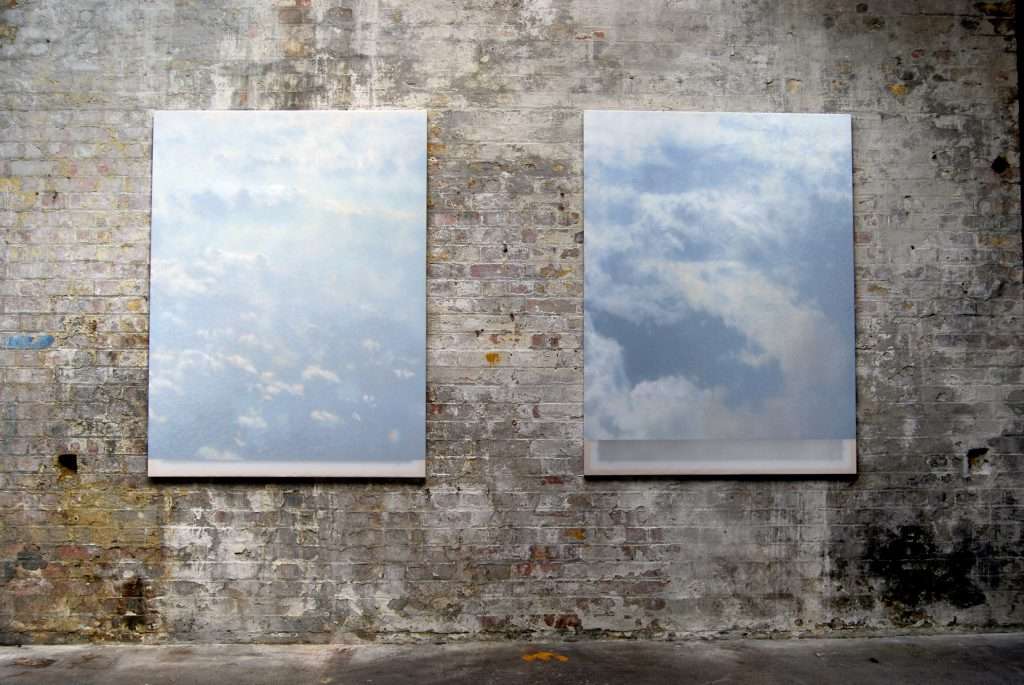 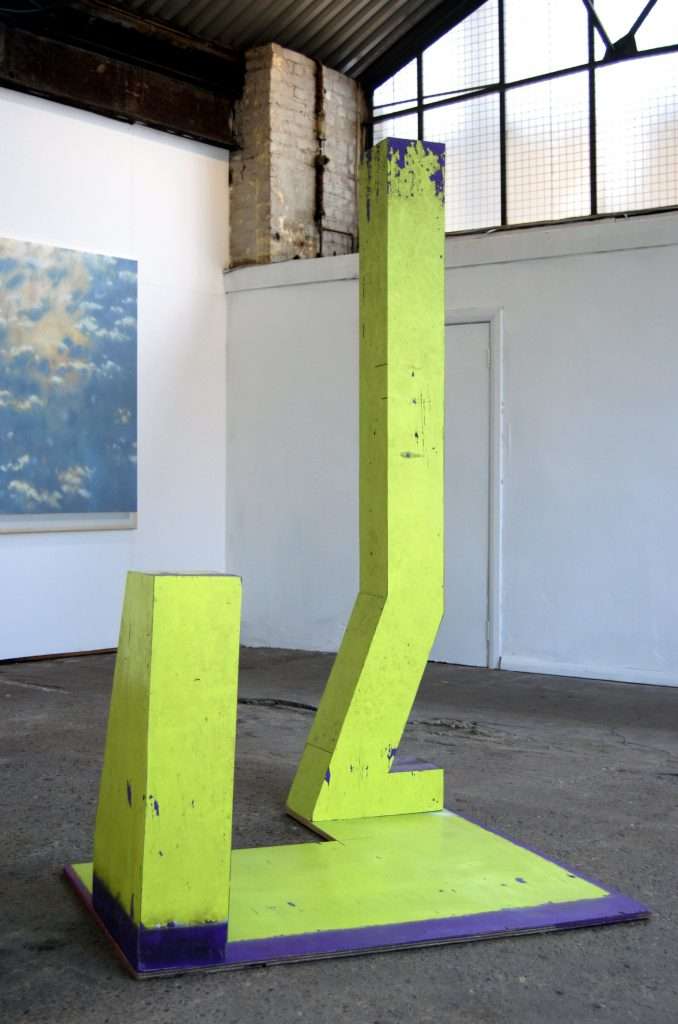 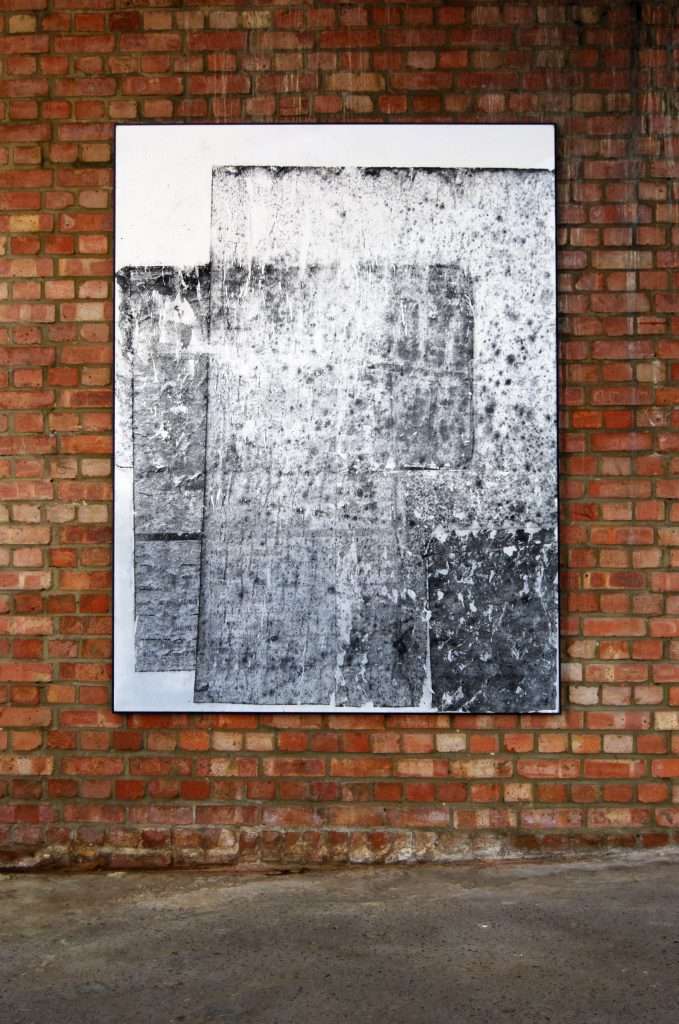 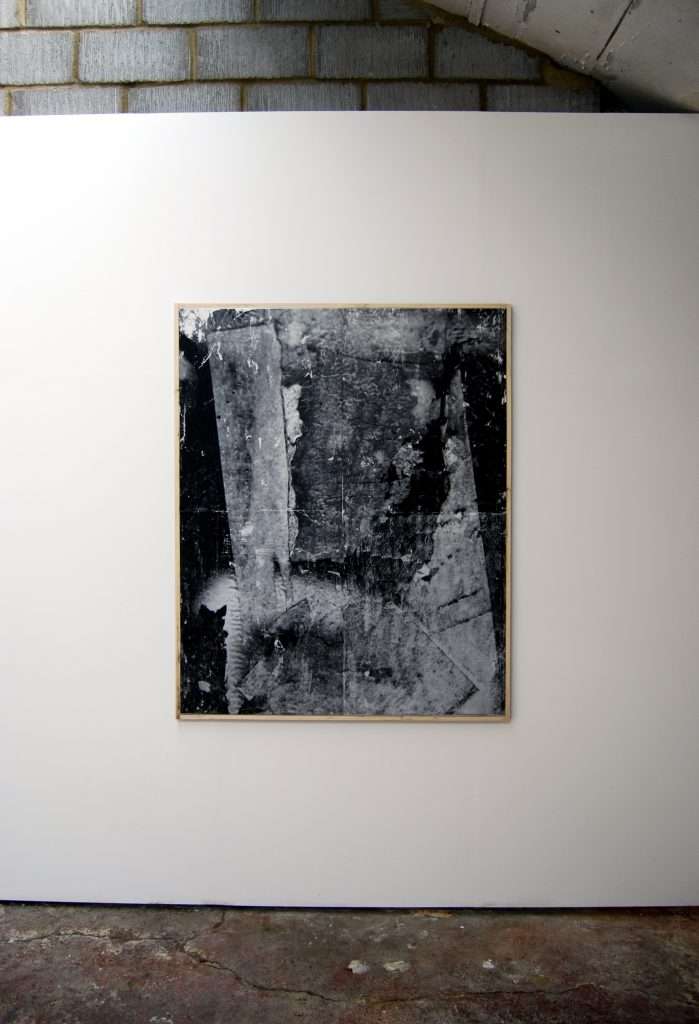 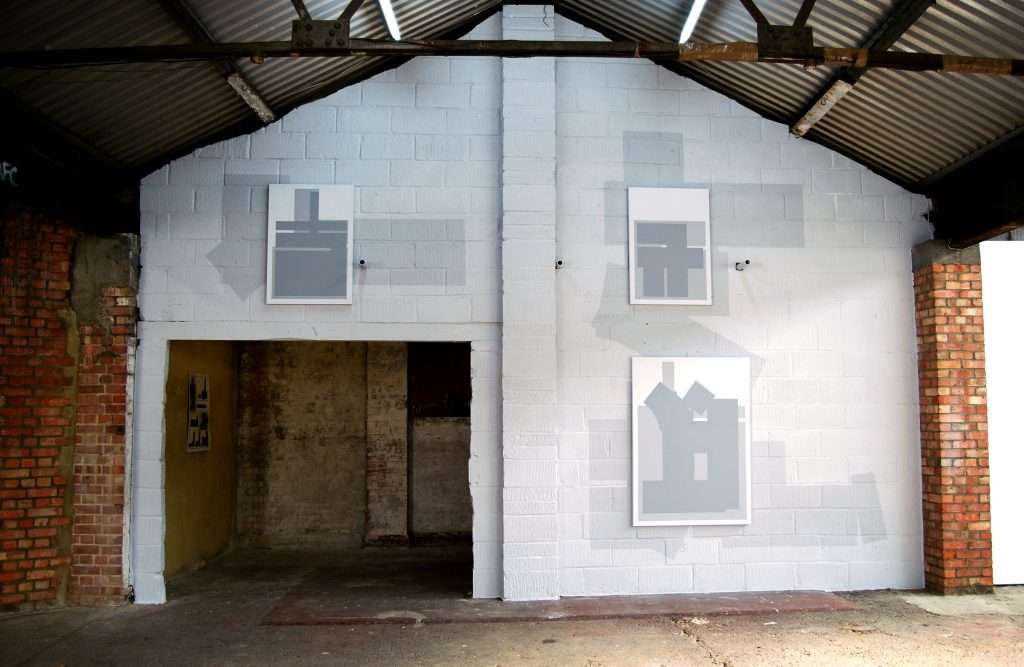 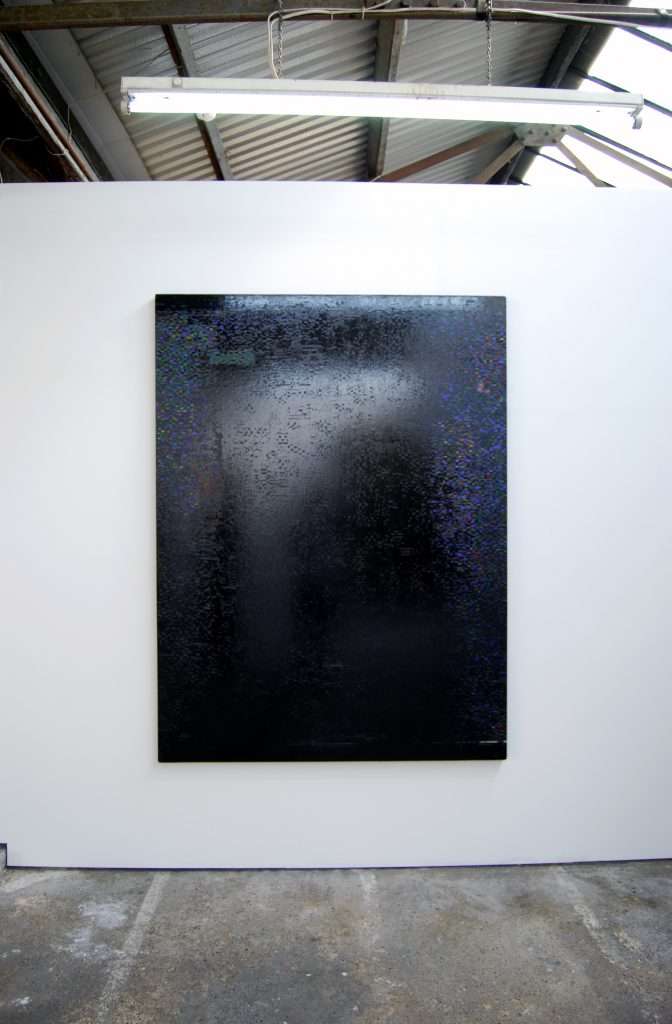 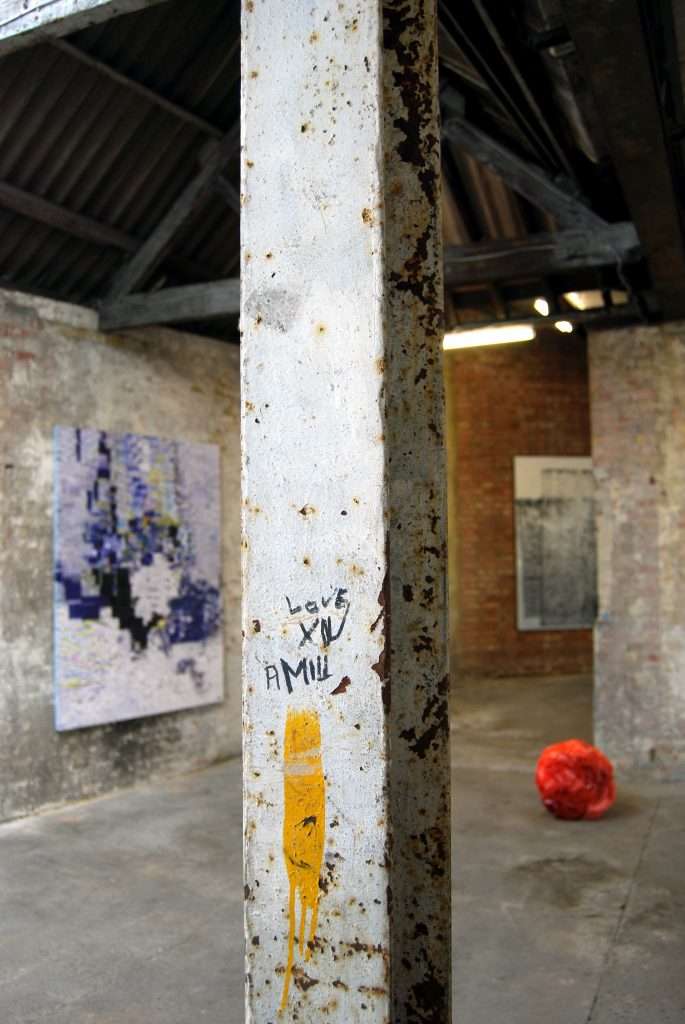 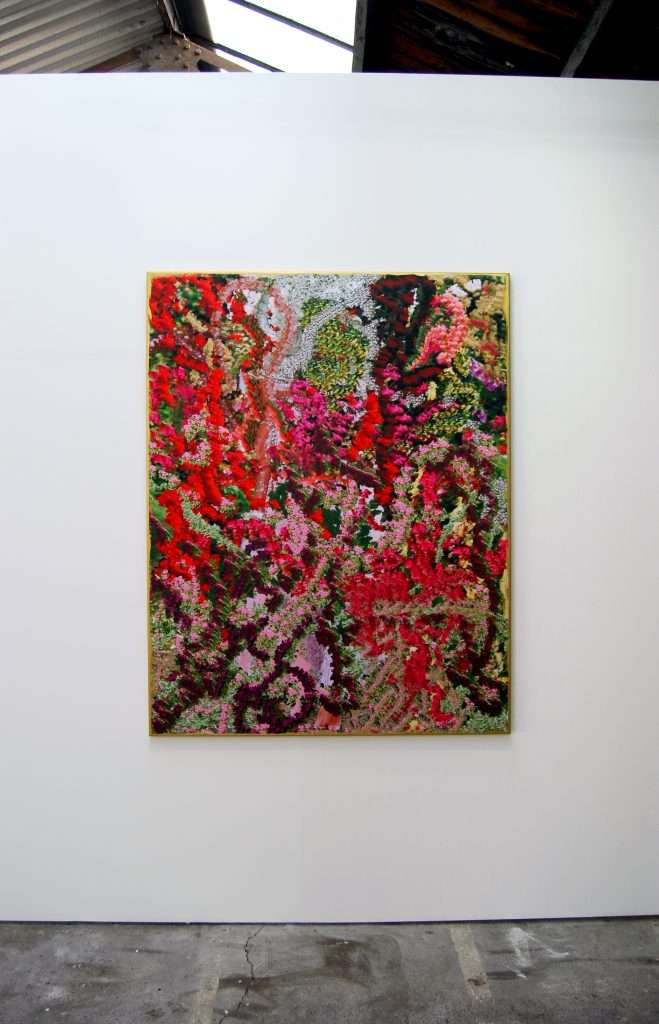 You really wouldn’t expect to find a gallery here. Don’t get me wrong, the well-dressed flats and bars are beginning to elbow their way in, gently nudging the locals of Acre Lane out of the way, but they’re still out-numbered by the take-aways, convenience stores and occasional crazy lady in pyjamas, chorusing the street with a joie-de-vivre that can only be achieved with stimulants.

Round the back of an insolvent plumbers’ merchant, nervously seeking assurances from Google Maps, a door suddenly opens and Lucy Von Goetz, founder of Post_Institute / Von Goetz Art, appears like a Snow Queen, guiding me in to safety. I think she might actually be glowing.

While Lucy disentangles herself from a phone call with a service provider, I wander in to explore and take photos. This could possibly be the most photogenic building in South London. Plant-life cranes its neck around drainpipes, a leaky wall licks its lips greedily at the new tenants, graffiti tags cut the queue. I don’t recall much of a breeze on the way here but the corrugated roof is clanking away like something seriously wants in. It’s pretty amazing.

Of course, this environment suits Mike Ballard and Lucas Dupuy down to the ground. Both of them started out as street artists and Ballard’s work, in particular, could easily have been fathered by a road like Acre Lane. Ballard’s plywood sculpture ‘Safe as fuck’, coated with found paint that may have been hi-vis a long time ago, is the first to welcome me, begging to show me around in Lucy’s absence. It’s more playful and innocent than his paintings which I clock screw-facing me from the far corner.

I approach respectfully but I’m distracted by two Martine Poppe sky paintings to my left entitled, ‘The screen and I’ and ‘There’s no layer on top’ which seem to have a calming, parental role in the room. Poppe has previously documented American rural landscapes from her travels in California but here escapes the sightseeing by prioritising the more worldly skies, some more cumulus than others. Her process involves painting on transparent polyester restoration fabric with a photographic guide underneath. You can see her rows of brush strokes, almost identical in size and shape, printing themselves across the hazy image like overweight pixels. Apparently, Poppe has to paint it all in one sitting, sometimes taking up to thirty hours, otherwise a seam appears, presumably where the oil paint has dried at different times. I think back to the lady in her pyjamas and wonder who’s crazier.

I make a mental note not to trip over one of Poppe’s ‘Tumbleweed’ sculptures while I’m taking photos. These are larger-than-life, scrunched up, glossy polaroids frozen in time with a coating of epoxy resin. There’s so much more fun to be had with these than the title suggests. I can’t help thinking of them as meteors flung from the stratospheres of Poppe’s paintings. Alternatively, by the way they’re scattered around the room, I wonder if they’ve been petulantly thrown at me while I had my back turned.

Unflustered by the huge increase in internet speed she’s just negotiated, Lucy points out the weathered silhouette of Mike Ballard lying beneath one of his SPARK graffiti pieces, aptly titled ‘Spark’. I prefer his totally abstracted and monochromatic paintings, ’In a silent way’ and ‘If these walls could talk they’d probably still ignore me’. The two paintings are actually quite different. The former is monolithic, it looms over you. The latter is more chaotic and menacing like an open door in a horror film which you know the heroes shouldn’t explore but will because they’re stupid and want to die horrifically. In both, Ballard’s textures are gorgeous; so much time has passed through them, so much energy has been recorded here.

Lucas Dupuy fits most snugly within the exhibition’s aspirations to investigate subverted ‘language structures’, so it’s no surprise to hear that the project was first conceived as a solo project before it grew. His work hints at language; letters and numbers that feel familiar but refuse to be deciphered. He commandeers the gable end of the building, sensibly painting the rather less handsome breeze blocks and overflow pipes with a pale grey design to compliment his latest works. His symbols have bulked up, hunkered down and sharpened focus but still occasionally topple like a crumbling acropolis into a pile. With his growing confidence as a painter, his work has evolved into geometric abstraction and the use of paler greys seems to be a deliberate departure from the solid black so closely associated with written forms.

Emerging from Dupuy’s workshop, at first glance, Ry David Bradley’s ‘Real life 2’ looks embroidered. As I get closer, I realise it’s swirls of digital brushes cloning customised samples from the daily news in dizzying circles until it’s impossible to tell where it starts and finishes.

My camera bleeps to tell me it’s focused on Konrad Wyrebek’s glitching ‘Machine on melting ice’, an ecologically-concerned, corrupted smear of bytes trying to catch up with our modern lives. Wyrebek’s painting depicts the dark shadow of a plane flying over an icy landscape but it’s been downsampled beyond recognition. Artists concerned with the digital often seem surprisingly nostalgic for the limits of yesterday’s technology; low bandwidths, blocky UI icons or huge CRT monitors that no-one has in their homes anymore. Is this not the ubiquitous age of high-speed downloads and pin-sharp, wafer-thin, 60-inch TV? I mull over the probability that Wyrebek’s plane is full of scientists involved in vital research, digitally transmitting information to satellites above. It’s really our only chance of redemption.

Lucy’s back on the phone when I start to pack up. As I squeeze through the door with my bike, we exchange a combination of nods, raised eyebrows and smiles; instinctive gestures with no categorical meaning beyond goodwill, and I can’t help but picture tumbling hieroglyphics slowly settling into a pile between us.

‘Slippage: Performative Utterances in Painting’ continues until the 26th April.

Nick Maroussas is an artist and writer based in London. All images courtesy of Maroussas.

Changes and unchanges and rechanges
There's been a lot going on lately. Is that the understatement of…