I get two full days to see ArtPrize, the 19-day art show with a $200,000 (you read that right, two-hundred thousand smackers) grand prize by public vote in Grand Rapids, Michigan, now in its 6th year. That prize also constitutes only the grand prize — there are numerous prizes given out to individual categories: 2D, 3D, time-based, and installation that all add up to a grand total of $560,000 in prizes. Not only is this kind of prize money pretty much unprecedented in the grand scheme of open-call art shows, but ArtPrize takes the concepts of big-ticket art fairs and the ubiquitous ‘gallery walk,’ and combines them into a huge all-across-the-board hodgepodge–a huge, sprawling, arty hullabaloo. Some of the work is good. Some of it is actually awesome. The grand prize award winner–perhaps not coincidentally–is the only piece I’d heard of before arriving here. Call it the power of Pinterest, but Anila Quayyum Agha’s Intersectionswas the most unsurprising win. Don’t get me wrong, I love it. It’s impressive. But it also speaks to a trend that is equally unsurprising when it comes to the public vote for the grand prize: bigger is better (supposedly). Is this bad? I don’t know. Does it matter? Probably not.

So some of the work is cool. Plenty of it was okay, but a lot of it was sort of ‘meh,’ or just kind of weird. Some of this feeling can be attributed to the way some of the spaces displayed the art, as they were not designed for that purpose, but nevertheless… ArtPrize’s uniqueness derives from its degree show- style setup (each artist has one piece or a small series along with a short statement and their basic information; some are invited to put out business cards or even comment journals) that invites everyone into the center of a buzzing downtown to check out art. This, to me, cannot be bad, but it can be, shall we say, an experience in economic divides.

Division Avenue, for example, is a main drag that runs south directly from downtown, along which there are numerous historic buildings, some unoccupied, but many of them an eclectic mix of gentrified shops, cafes, art studios, a record store, a couple of head shops, homeless shelters, and faith missions. People pop in to gallery spaces to peer at expensive art pieces while clusters of homeless folks chill on street corners. It’s a neighborhood in transition. But this dichotomy wasn’t lost on ArtPrize either. Many of the curated exhibitions tackled issues like consumerism, politics, and social issues — a couple of installation works doubled as awareness-raisers for children’s and public arts programs. One piece even addressed the art world itself: William Powhida‘s Unretrospective submitted reproduced versions of previous work as well as a new piece, Dear Grand Rapids, that explored the real basis of ArtPrize: money. Of course, artists and money are uneasy bedfellows in what we call ‘the art world,’ and this is so well known I’ll just stop right here.

Overall, I’m impressed by ArtPrize’s scale and genius of marketing and publicity more than the overall quality of the work in the show. I’ll hazard that it’s not actually about the work at all; it’s about making lots and lots of money. I ran across countless examples of work exploring themes of commercialism and capitalism, and that struck me as more than just a little ironic. ArtPrize is about bringing people to downtown Grand Rapids and bringing in money that benefits the city, as well as–hopefully–the social initiatives that are made visible by this event. It’s about a day or two on the town rather than the artwork.

The work itself, as can be expected with over 1500 exhibiting artists and 174 venues, is insanely varied in subject matter, media, and quality. Most of it is from artists in Michigan. The most interesting stuff is usually in the places one would most expect to find it: the Grand Rapids Art Museum and the Urban Institute of Contemporary Art. I was really thrilled with the show at the Kendall College of Art and Design, as well as the Frostic School of Art at WMU. And fortunately-unfortunately, there are some really fun places and spaces in downtown Grand Rapids, but they’re not great for displaying art. ‘The BOB,’ for example (short for the ‘big old building’) houses a sprawling multilevel bar and restaurant and shows a lot of work during the show, but the place is so insanely packed with people that it’s impossible to really take in any of the work.

So what does that mean for the votes that lead to the prizes? What about the numerous coffee shops where work is displayed inaccessibly high above tables or crammed in the back of a packed boutique? There is an innate implied hierarchy between work that displayed in the museums and that which is displayed in historic homes, shops, or cafes. The show is ‘open,’ but it’s not fair. Nor should it be — or can it be — but perhaps with so many artists and venues the show might benefit from delineating further categories that present student work or young artists in a different context than professional or award-winning artists.

I’ve one more day to go, and plenty of work I’m excited to look into and share, so stayyy tuuuuned! 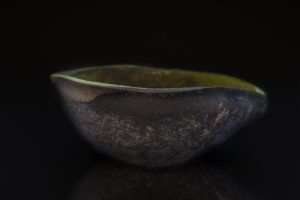 More from Waël Seaiby: oh, no!
Back in June, around the time of the Edinburgh College of Art…