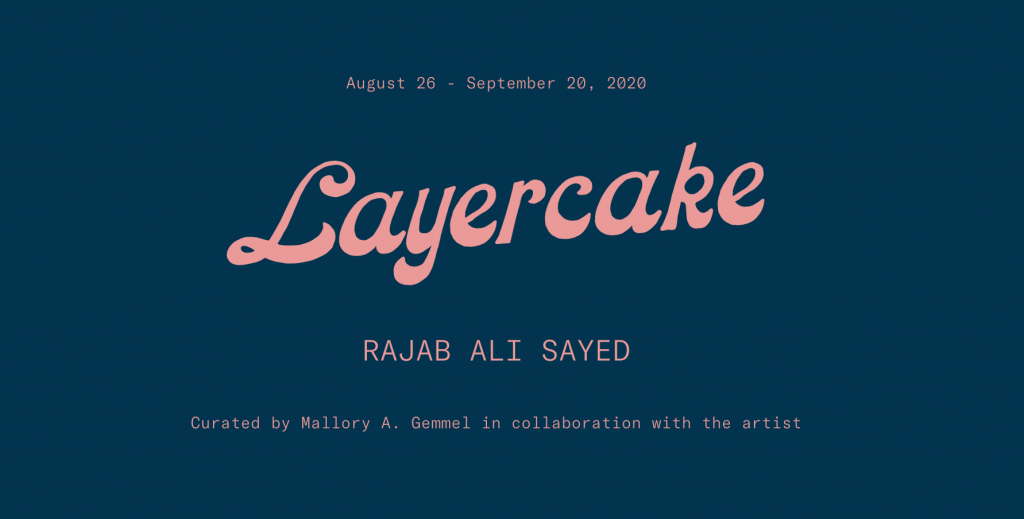 Guest curated by Mallory A. Gemmel in collaboration with the artist

YOUNG SPACE is pleased to present Layercake, the first virtual solo presentation of an extended body of work by Los Angeles based artist Rajab Ali Sayed.

Growing up as a queer man between Manilla, Philippines; Karachi and Lahore, Pakistan; and Houston, Texas, has influenced Sayed’s process of constructing physical and psychological spaces with paint. Raised and nurtured by a Filipino, Catholic mother and Pakistani, Muslim father, Sayed encounters culture through the mediation of his biracial experience. His practice is intertwined with his intersectional life experiences and composed of paintings that illustrate thickened narratives of his unique personal history. Sayed’s transience between disparate cultures, geographies, and histories foregrounds his work; he embodies paint as a means to mark and study his distinctly personal mythology, and to reflect upon specific time, place, and existence.

By precisely laminating materials such as pigments and glazes, Sayed prepares his paintings as a way to speak about images and their potential to contain a multitude of narratives. Like cross-sections or slices of cake, his works are a result of a process layered by traditional painting techniques, colour theory, iconography, and reference to contemporary and historical visual culture. At the helm of his process, is an exploration of colour, and an understanding of how pigments blend to create tone and depth. For Sayed, depth manifested by colour is not only visual, but also perceptual: he is always thinking about how colour is representational of time and place, culture, and history. Through these processes, his work carefully renders query about the relational ingredients that coalesce identities such as language, politics, gender, sexuality, culture, and race.

The select works in Layercake generate a consideration of how the agency of creating a self-driven image and presence of identity is a quality distinct to our fluid visual culture. How does the potential to be intentional with the decoration of self-image — in whatever way is seen fit — affect the way we see and live as individuals, with each other, and for our future? How do we recognize the weight of designed self-images and their power to evoke social as well as political conversation, ability, and even, transformation?

Rajab Ali Sayed (b.1990) is a visual artist who lives and works in Los Angeles, California. He received his BFA from the National College of Arts in Lahore, Pakistan in 2013, and his MFA from the University of Houston, TX in 2017. He attended Augustana University in Sioux Falls, SD as a Fulbright Exchange Scholar (2011) and completed the Sam and Adele Golden Foundation Residency (2017) and Vermont Studio Center Residency (2017).

He was an artist in-residence at Otis College of Art and Design in Los Angeles (2019) and his painting Partition was commissioned by the City of West Hollywood to be reproduced as mural on vinyl and is presently on view at the West Hollywood Public Library through December 2020. He has also taught drawing and painting at The University of Houston (2017), Art League Houston (2018). He is currently a part of the performing arts faculty at Bridges Academy in Studio City, LA.

Mallory A. Gemmel is an emerging editor, writer, and curator working on the unceded territory of the Sḵwx̱wú7mesh (Squamish), Stó:lō and Səl̓ílwətaʔ/Selilwitulh (Tsleil-Waututh), and xʷməθkʷəy̓əm (Musqueam) Nations in Vancouver, Canada. She holds a Bachelor of Fine Arts in Photography and Curatorial Practice from Emily Carr University of Art + Design and a Master of Arts in Comparative Media from Simon Fraser University. As an arts practitioner, she has taken on numerous roles including archivist, programming assistant, and exhibitions assistant at various institutions in Vancouver. She currently sits on the CMA Journal board at SFU as an editor, and acted as the managing editor to Issue Five Affective Framing: Cinematic Experience and Exhibition Design. In the summer of 2019, Mallory was an attendant of the Otis College of Art and Design Emerging Curators Retreat. She has spoken at the UAAC annual conference, as well as the International Interdisciplinary Conference Memory, Affects, and Emotions about her research which considers the intersection between affective processes of cinema and curatorial practice.

Young Space is an independent, itinerant curatorial project organized by Kate Mothes. The online platform emphasizes new and exciting work by early-career and emerging artists. Exhibitions, both physical and virtual, are coordinated nationally and internationally, in collaboration with artists, spaces, and other organizers. Young Space continues to expand and reconfigure in response to artists’ input and participation. 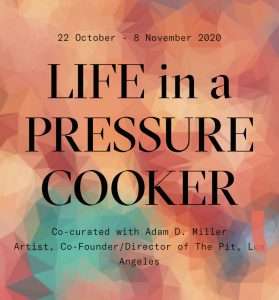