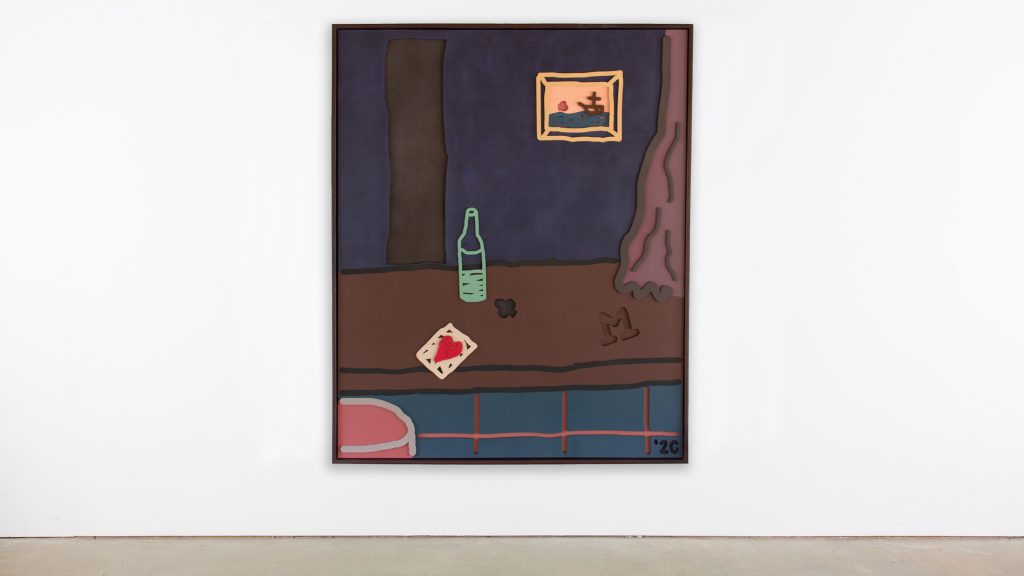 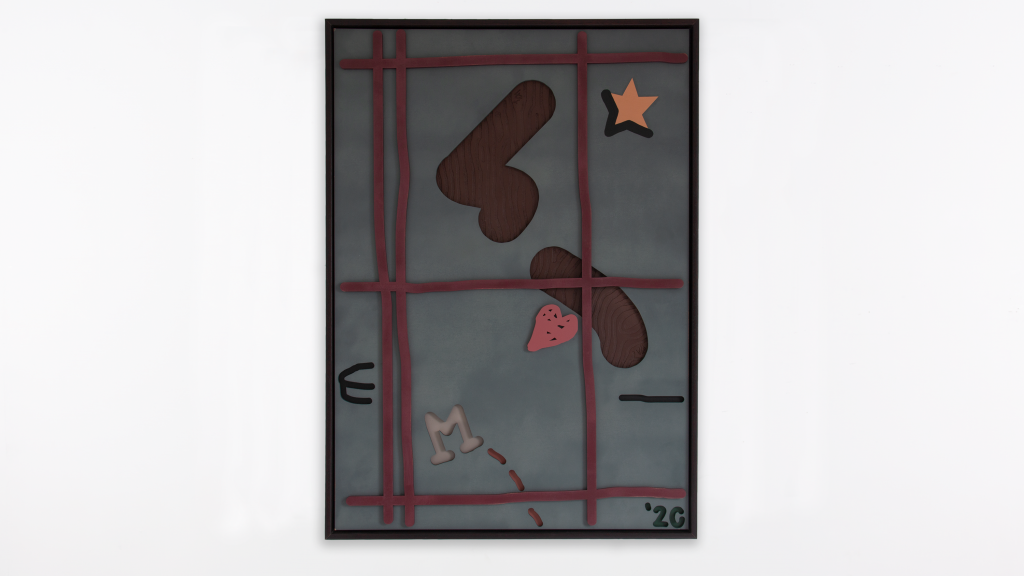 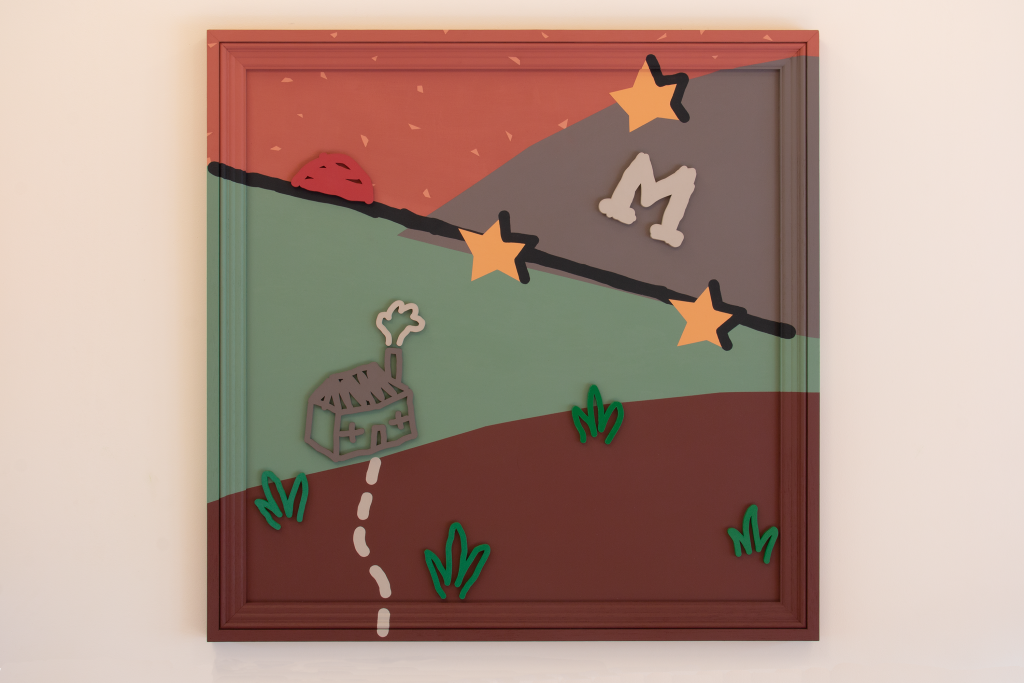 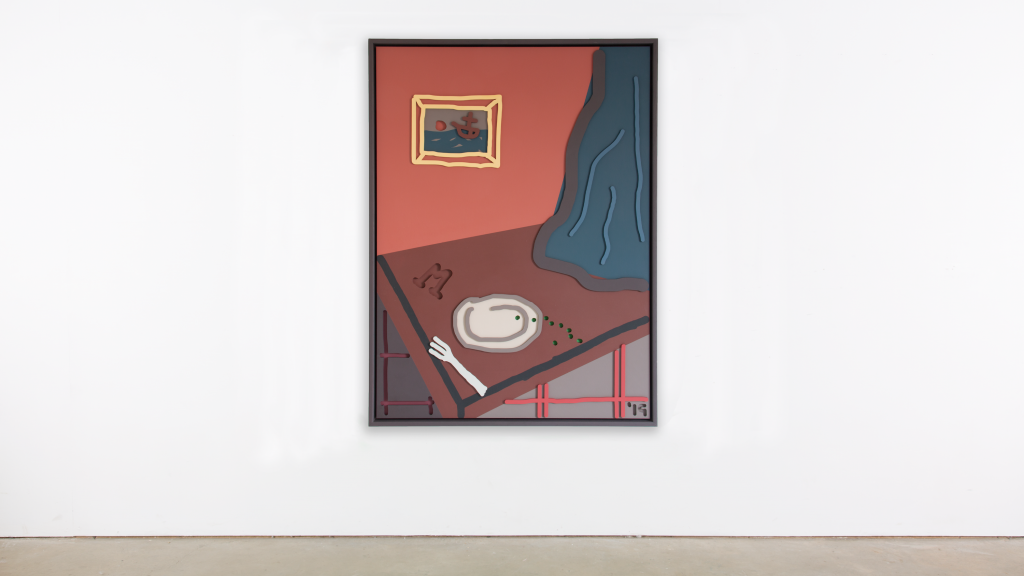 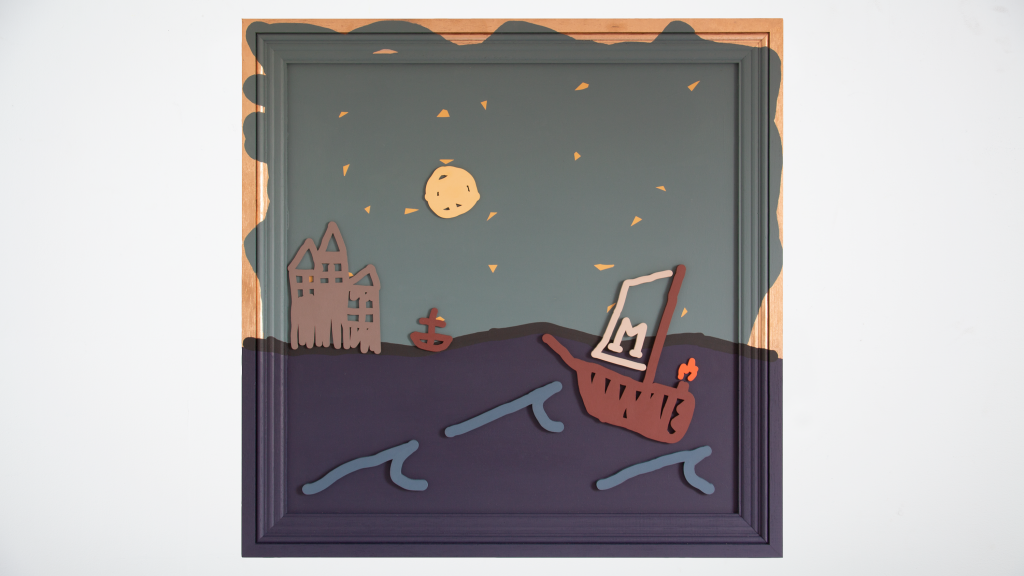 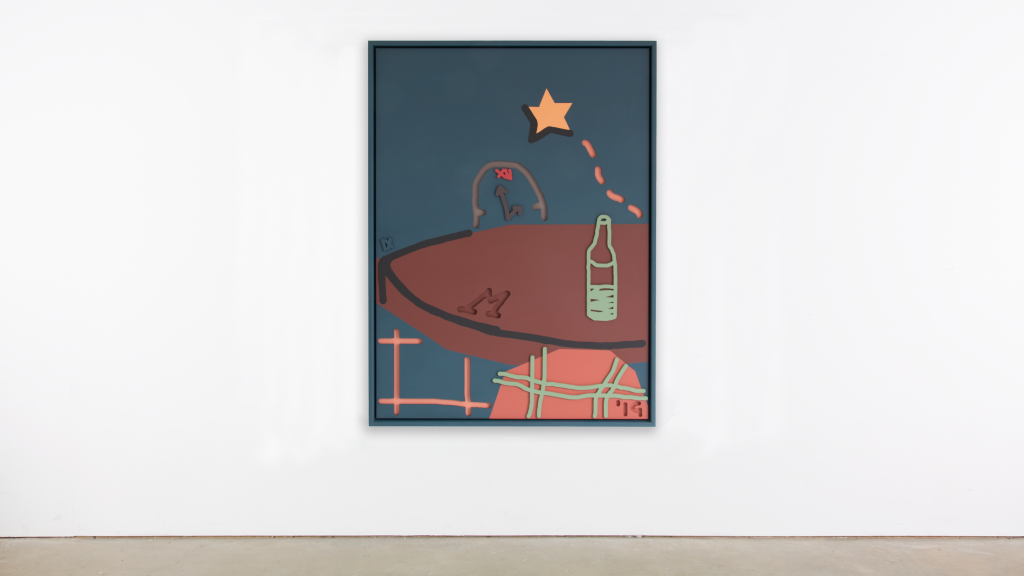 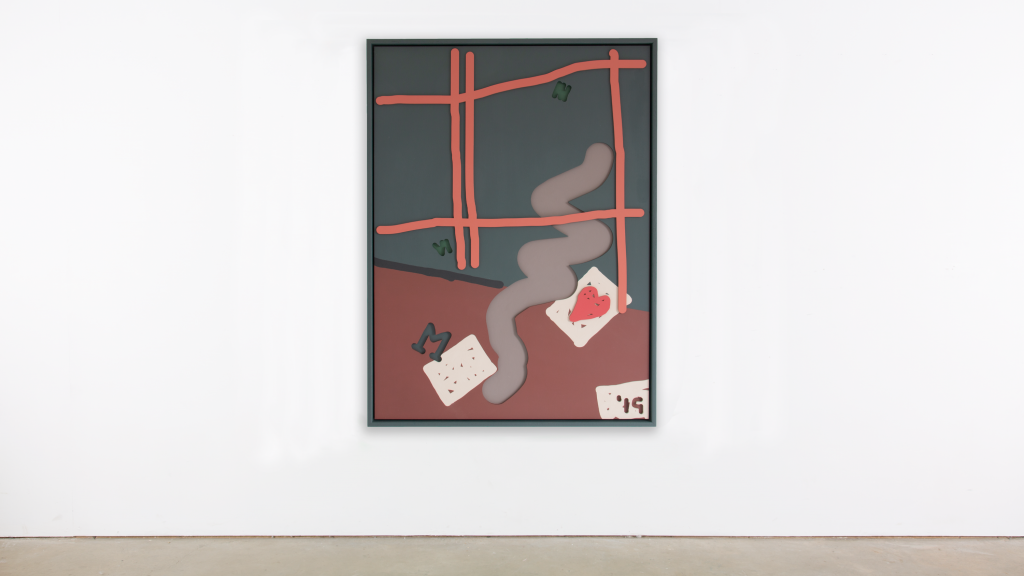 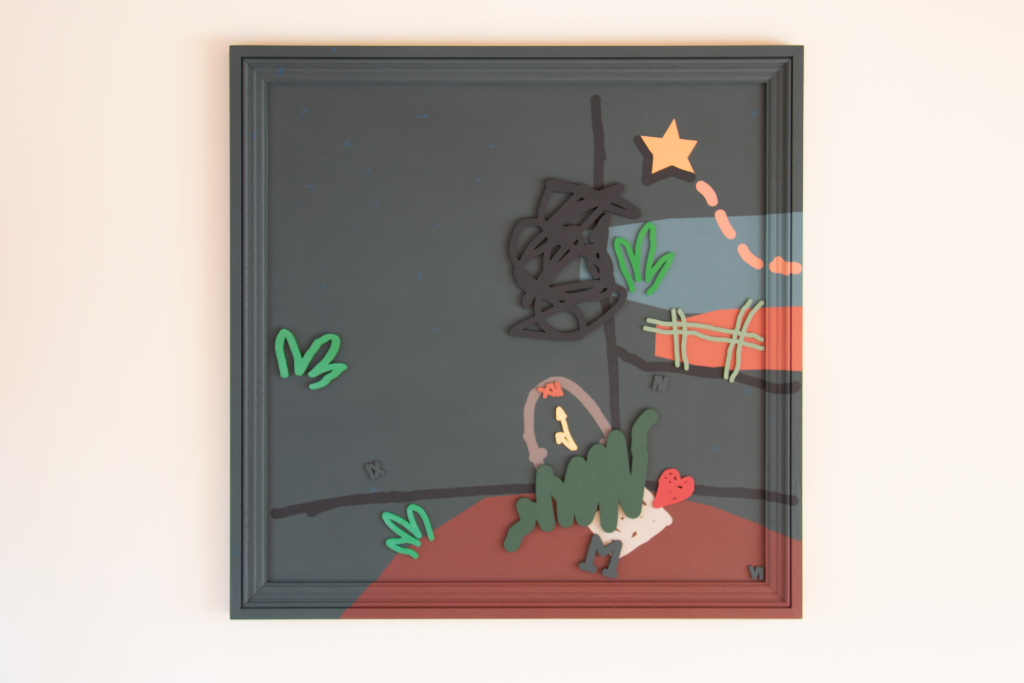 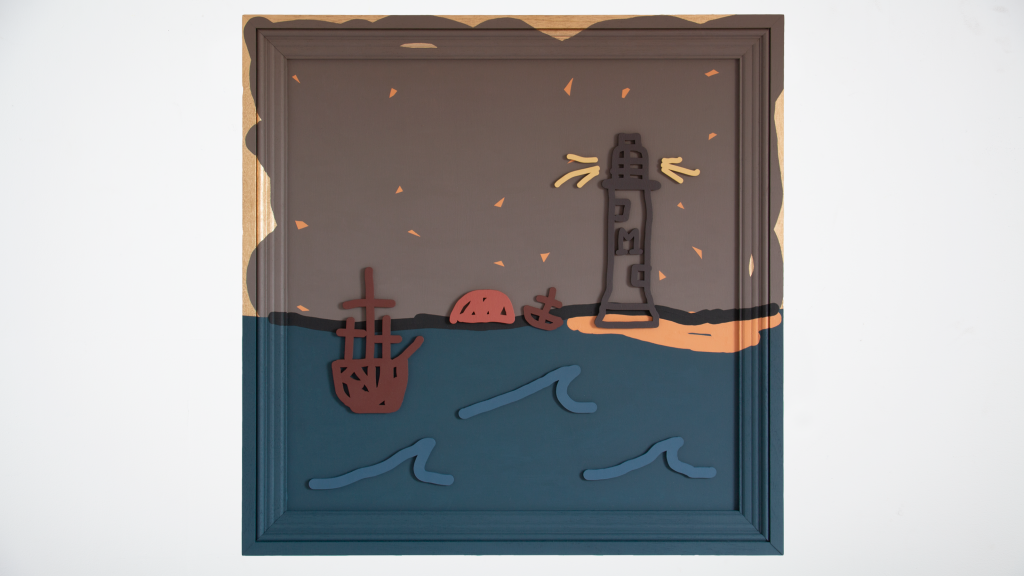 So my name is Max, I grew up in Buckinghamshire and I’m a recent graduate from the Ruskin School of Art. I only started making paintings just over a year ago, so I’m fairly new to the game and I feel like I’m learning a lot as I go along.

My earliest memory was probably in primary school – I remember looking over someone’s shoulder in art class to see a drawing he was doing of a sun. I liked the look of it, so I ended up taking heavy “creative inspiration” from his work but going crazy on the colours. Of course I then took it home to my mum and she had no idea so thought it was great. I look back on that as perhaps the start of my love of colour and drawing, both of which are now central to my work today.

Throughout secondary school I was very fortunate to have a teacher who allowed me to really do what I wanted, and it was at that point which I started to develop an interest in more conceptual art, which then led me to choose to study at the Ruskin. I once again spent most of my time there on more conceptually driven projects, often film or photography related – mainly because I liked the immediacy of it.

However, heading into my final year I felt my passion for art dwindling and decided I had to find a way to make it enjoyable again. I remember wanting to develop a practice that would allow me to go back to the real basics, almost as if I could go back to my primary school classes and just mess about with colour and shapes.

At art school everyone tends to put you in a box, and so I remember thinking it would at least be entertaining to break out of that and just do something nobody expected from me. The first week back, I came in wearing a set of overalls I had from working as a decorator in the summer, and just begun painting. At first it was almost a bit of a performance, but I soon became seduced by the working process and just how satisfying making these objects was.

I’m largely interested in this romanticised idea of Britain, which is often combined with cliches of British culture or history. I’m particularly interested in the mundane works of art which I like to refer to as “Wetherspoons paintings,” the kind of artworks that are so reproduced they become unanimously inoffensive. These reproductions usually function as wall decor over art, fulfilling the role of innocuous decoration within British homes and businesses. I think thats really where my interest in the maritime comes from. Overall I enjoy balancing these references with a romanticised yet slightly humdrum take on the character of the artist.

In terms of artists work, I enjoy referencing a lineage of British painters from Constable & Turner to Howard Hodgkin & John Hoyland. I’m also a big fan of Patrick Caulfield.

My process usually begins with research – currently nearly all of my interests seem to revolve around superstition or tradition. I often borrow imagery or motifs from photographs, and combine it with stuff I see when I’m out and about. I do these drawings and doodles on my computer and then look to translate them through various means; mostly laser cut or CNC’d elements that are ordered a week or so before.

What is your favorite material to work with, and why?

I’d always loved the fluidity and matte quality of household paint. The way it produces a finish that is simultaneously uniform yet upon closer inspection reveals evidence of the hand & brushstrokes. I think I also enjoy the nod to some of the YBAs.

More recently though, I’ve really been interested in the variation of textures in my work, and so have been messing about with oil, acrylic and spray paint. I finally discovered an acrylic paint from Lefranc and Bourgeois that has many of the qualities of household paint, so I’d say thats probably my favourite at the moment.

Very messy and covered in a thick layer of brownish-purple dust.

Recently I’ve been really interested in art’s relationship with the seasons – the notion of a “dark/blue period,” which perhaps romanticises and commodities the artist’s mental health; for better or worse.

As well as this my interest in superstition has led to me reading about English folklore as well as more contemporary takes on fairytales – both of which are informing the works I’m making at the moment.

I don’t know about a specific piece of advice, but I would say that my tutors in my final year were particularly useful. Actually I think I remember one of my tutors Jost giving me quite an interesting piece of advice, which was that to be an artist you need to have a big ego. I think having thick skin has proved important, particularly in the times when there’s not a lot going on. I also think to make your best work you need to believe it. You’ve got to be passionate about it to give others the chance to be. I think that confidence is often reflected in the work itself. Of course, it’s just very difficult to sustain that confidence through the inevitable highs and lows.

I think just the idea that it’s all on me, there’s no way to be a passenger. It’s both daunting and exciting. The scary part is you never truly know how it’ll go down or what will happen after. I think I’ll always be reliant on a bit of luck, but that keeps you on your toes.

The only other thing to add would be that I’ve realised it’s important to be aware of not just the artistic side of things, but also the business side to art. The frustrating thing is, nobody talks about that side of things at art school. At the moment it’s pretty much just one of those things you have to work out for yourself, with a bit of help from websites and stuff like this. I do think everyone would benefit from art schools being a bit more transparent about what it means to be be an artist, professionally.

I think it’s difficult because there are so many ways to measure it. I guess I’ve always had this interest in mass reproductions of artworks that look to imitate paintings – the kind of facsimiles that often appear in businesses, pubs, homes and restaurants and function more as wall decor than works of art. Sometimes I think that perhaps they’re the ultimate success in art. For your your artwork to transcend art and enter mainstream culture. To become an inoffensive, shoddy reproduction that’s then thrown up in a Wetherspoons or some bloke’s home. An artwork that is never really questioned because its unanimously “good”, something like Constable’s Hay Wain or Matisse’s Snail. I think that idea is also just something that entertains me, so we’ll go with that.

A few paintings, a few sculptures and a few textile works. 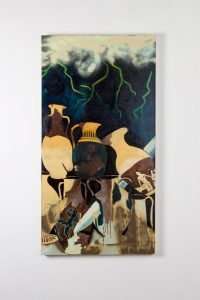 Ben Stephenson
Can you tell me a little bit about you? Born and having…