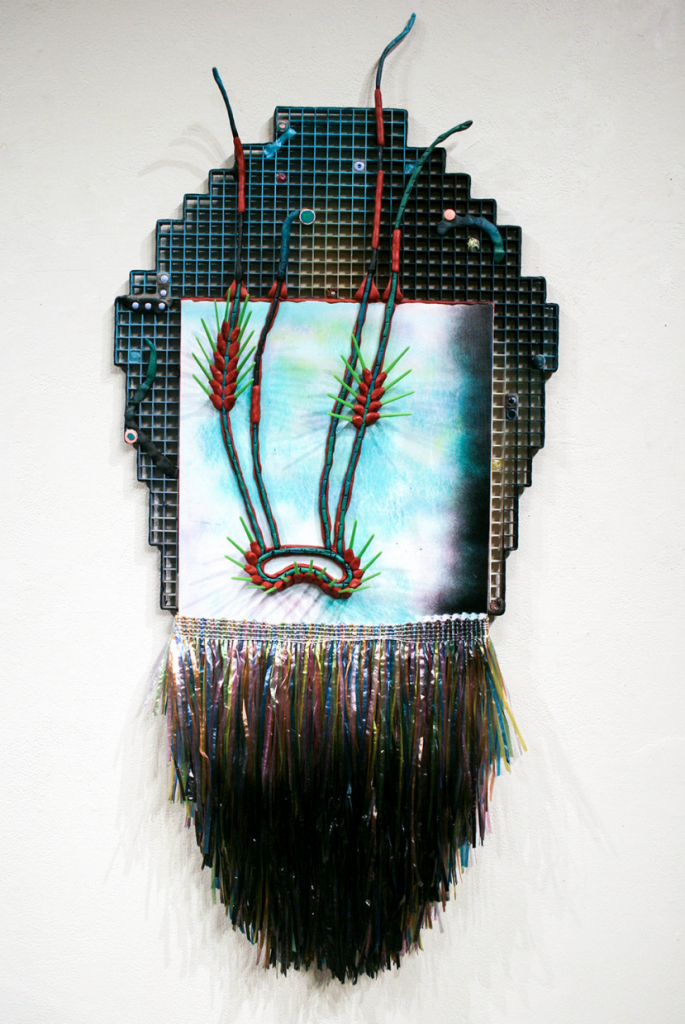 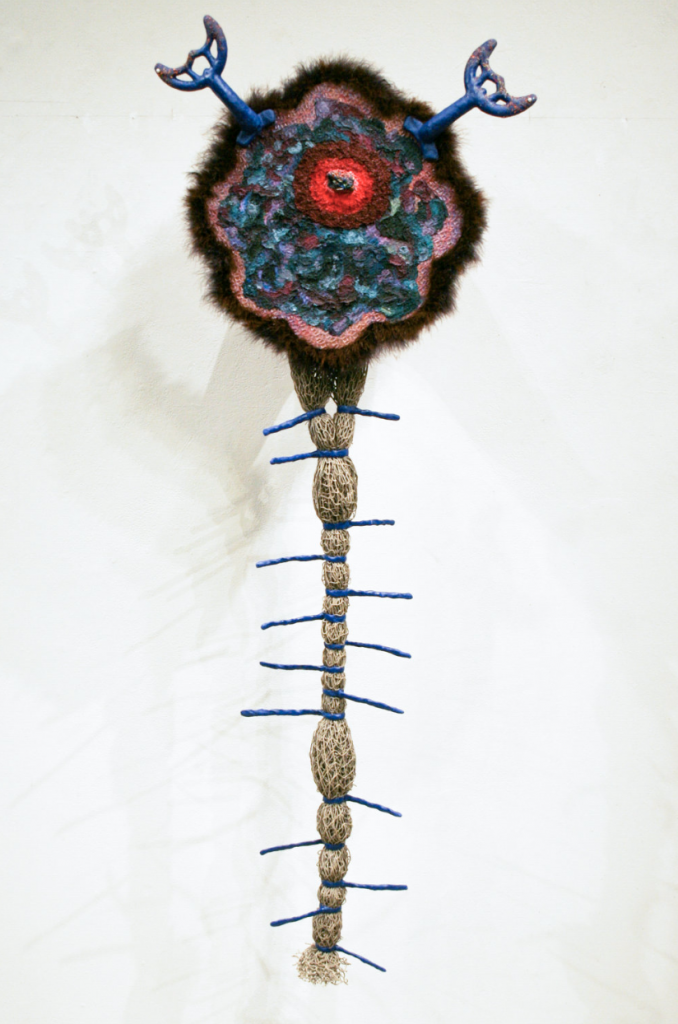 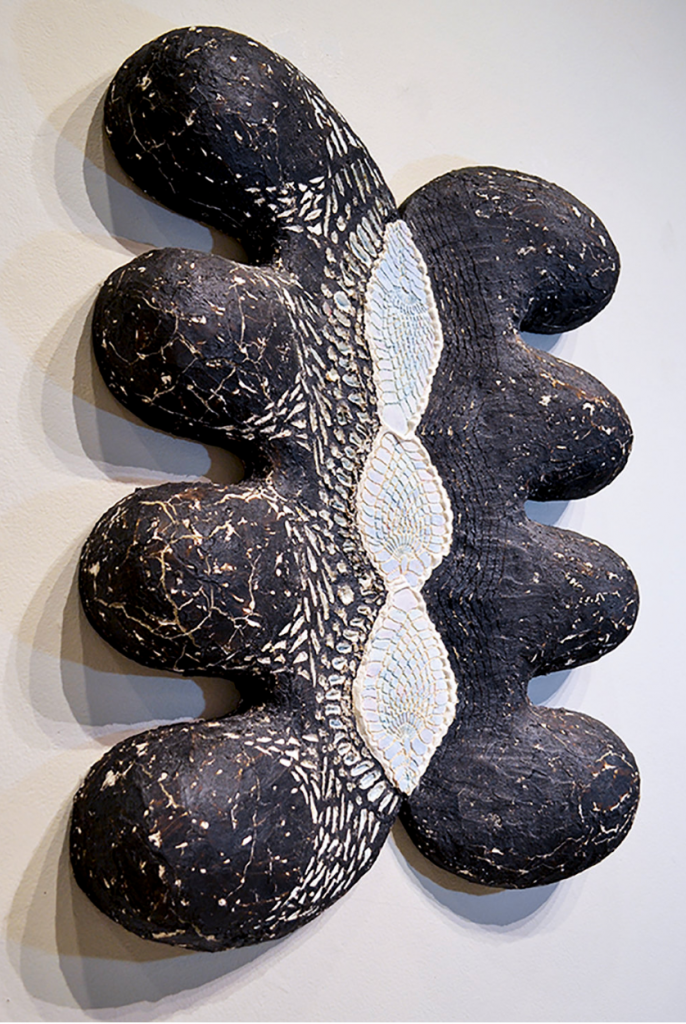 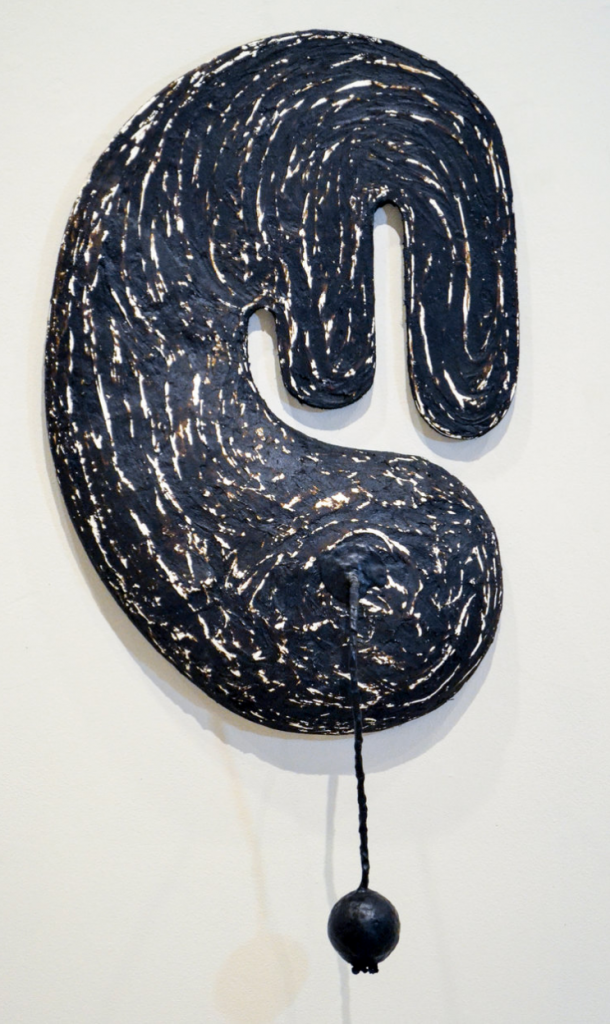 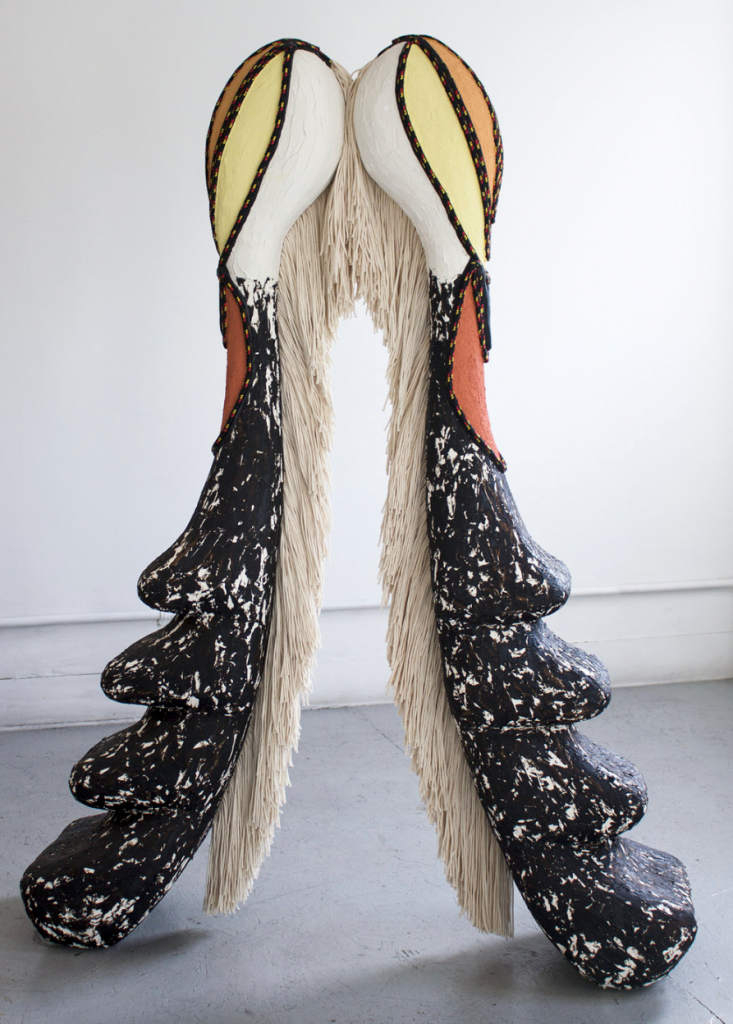 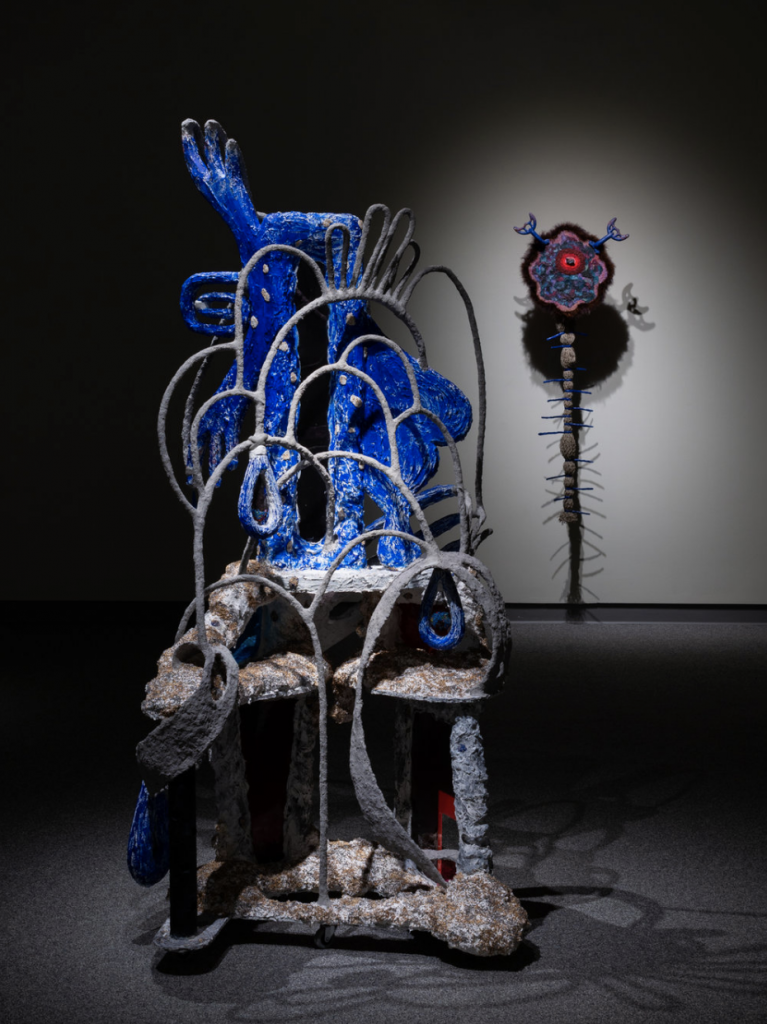 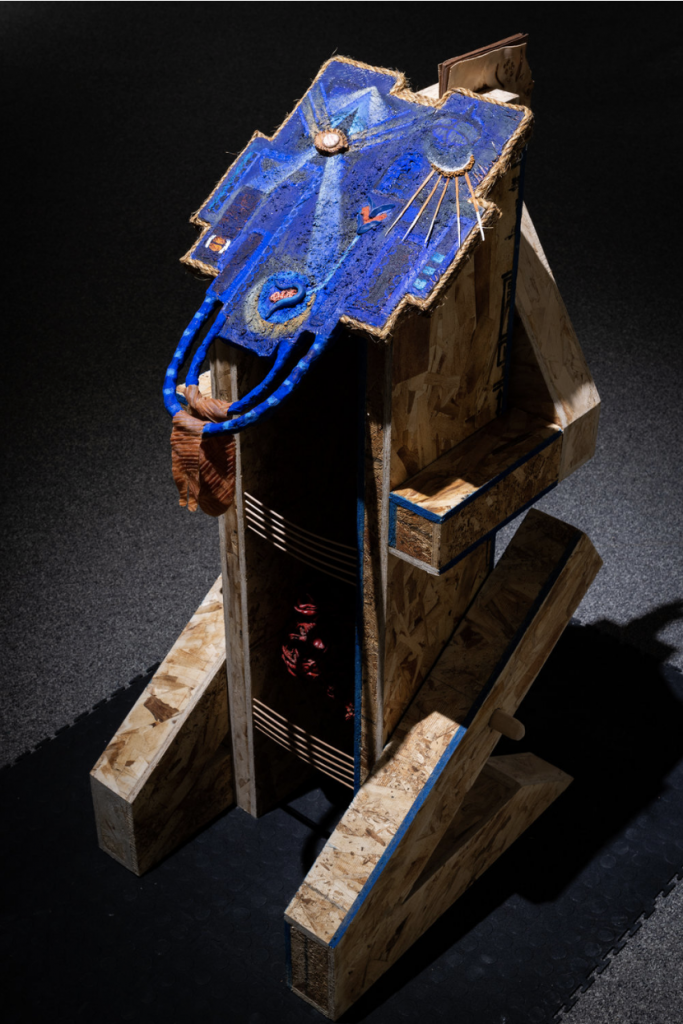 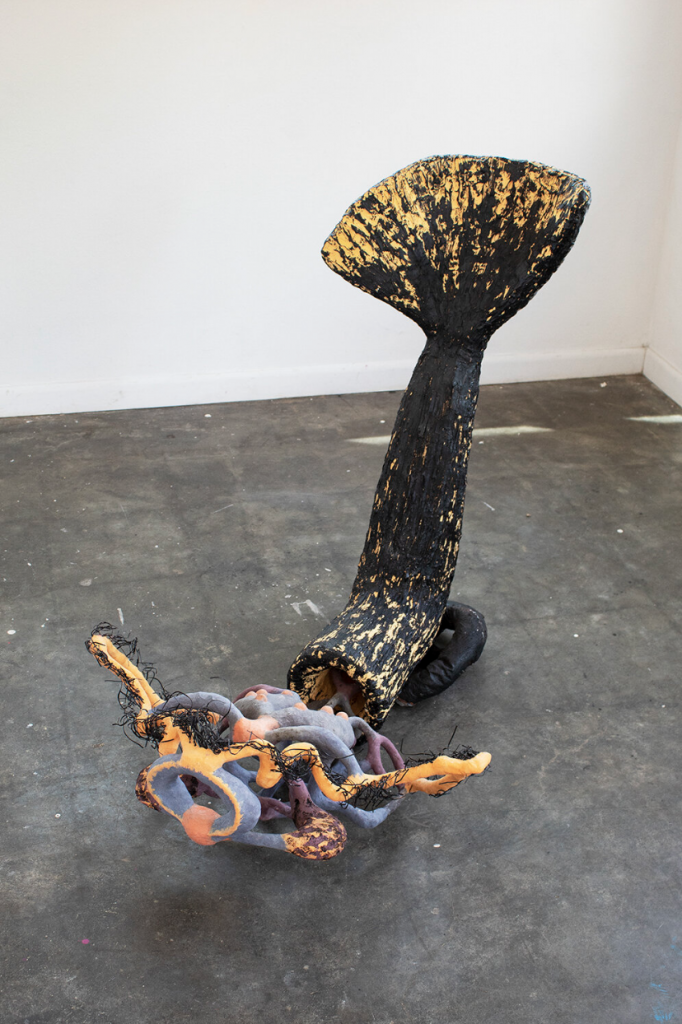 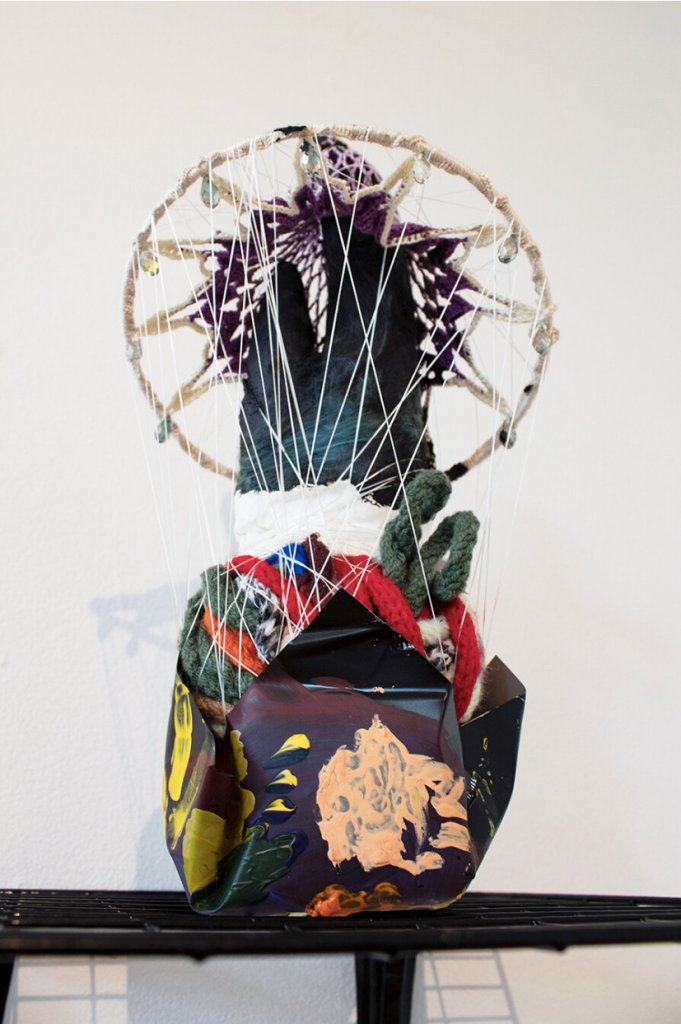 I was raised in various cities in Southern California, but I often say I grew up in Portland, Oregon. I was based there in my twenties, working full-time, engaged in activism, and making a lot of paintings. I was in a local theater company and improv comedy group for quite a while, and I made collaborative performance art with some incredible artist/friends. I went to community college there and received my BFA from Portland State University. My (perhaps over-)industrious nature during the ten years I stayed in Portland really shaped the artist I am today.

In recent history, I completed my MFA from University of Nebraska – Lincoln in 2018. The weekend after I closed my thesis exhibition, I found out I was selected to be a 2018-2019 Fellow at the Fine Arts Work Center in Provincetown, MA. I finished the blissful seven month residency this last May, and in July I relocated to Fortaleza, Ceara, in Brasil. I’m busy learning Portuguese and prepping my new home and studio.

I have a memory of sitting in my older sister Audra’s room after school one afternoon, I think I was around 7 years old. She was already in high school and this particular day she was practicing calligraphy and drawing in pen and ink. The floor of her bedroom was strewn with paper and drawing utensils. I picked up a pencil and, enthralled, drew a kitten playing with a ball of yarn. I know it couldn’t have been the first time I drew something, but something clicked this particular afternoon – and the drawing was pretty good. I had already been enamored with reading and writing poetry. From then on I had notebooks, or those tacky three ringed binders with plastic sleeves, full of drawings and poetry. I still posses a lot of those journals (from age ten and onto the angsty teen/young adult volumes). In my teenage years, I started taking community college courses in art and writing. I was always the only kid in a class full of adults, but my work could keep up. I wasn’t thinking about a career as an artist then, it was just something I loved and took very seriously. I’ve continued to pursue various other interests, but in the end, visual art remains my internal home base.

I consider myself aligned with the legacies of world building and speculative fiction. I utilize fantasy as a tool to reflect on the socio-political absurdities of our time. When I create objects, I often assign them surprising “functions,” including emotional labor or care taking for the earth. This is a result of my continued research into material feminism, mysticism and systems of control. In my vision, cultivating spiritual and emotional relationships with the material world around us is key to our continued survival.

I recently completed a body of work called “Spells against extinction” while in residency at the Fine Arts Work Center in Provincetown, MA. I found myself preoccupied with the concepts that underlie an area considered the “birthplace” of the nation, as well as host to the infamous witch hunts of New England. I was particularly interested in a common sentiment that links both of these narratives: a fear of the other, in regards to nature as other, and to those who had an intimate relationship with nature (as women were perceived). Colonial America considered nature (and “subhuman” black and brown people) a wild thing to conquer and capitalize upon. There was a deep distrust of native medicine, occultism, any activity that threatened capitalist hegemony. These attitudes are tenants of American culture right on up to present day as we uphold white supremacy and continue to prioritize profit over environmental sustainability and human rights.

It felt to me like we are in a feedback loop of self-fulfilling prophecy. Have we created the formula for our own extinction? Is the inertia of our path so strong that only super-human forces can instigate a directional shift? I made a series of sculptures and wall works in response. The works are created to be embodied “spells,” or autonomous agents acting for particular outcomes, the same as a spoken spell. Some act as inhibitors for Armageddon anxiety, others condition group action, and so on. I think they create space for hope and doubt to cohabitate.

In part of a show, two other performers and I wore whitey tightie underwear with lights sown into the crotch area. The performance space was very dark. We read from random pages of books from the light of our own and one another’s groins.

The best artistic advice I received from a mentor is: think with your hands, make everything, curate yourself later.

Never let imposter syndrome stop you from showing up. You’re only faking as much as everyone else is.

I moved and settled in Brazil very recently and I’m currently in the preliminary stages of rebuilding my studio. I enjoy woodworking, so I am making my work table, shelving and so on. But in ordinary circumstances, it doesn’t take very long for me to turn a clean new studio into near chaos. I work messy. I collect a lot of random found objects, used items, natural materials, anything I see potential in. I end up working on tables, the ground and the walls simultaneously. It helps me to maintain momentum by working on multiple projects at once. That way, when I’m having a hard time making a decision, or a particular work needs time to rest, I can stay busy by shifting my focus. I find that even when I’m working on purely sculptural objects, I am uncomfortable with clean studio walls. I pin up a lot of my drawings and work on small paintings when I need a mental break. I call my studio a “danger zone” for other people. Shoes are always required.

I have an MFA and a BFA, but I received both from public universities, not private art schools. I mention that because even though I chose the cheaper option, I still have a whole grip of student debt. Unsurprisingly, I’d say debt without a clear path to a steady income is the #1 reason not to go to art school. On the other hand, if you live in the US, you’re probably going to pay a lot regardless of what you pursue. I’ve always followed my passion over money. Personally, I have no regrets. Going to community college, a state university and a Research 1 university for graduate school helped me grow significantly. My upbringing was isolated due to my parent’s religious affiliation. I went into home schooling from 7th grade on to focus on preaching. Needless to say, I wasn’t exposed to a lot of information and a lot of options. In public colleges, a plethora of ideas and people from other backgrounds were revealed to me. I met some of my closest lifelong friends. As far as graduate school is concerned, the concentrated time to make work is incredible. But for real, the school should be paying the artist to attend at that point, not the other way around.

Being an artist certainly isn’t the easiest career path. I think the most primary challenge is learning to continuously push oneself past expectations, and trusting one’s inner voice as the ultimate authority. To make art is to be vulnerable, and vulnerability takes guts. That’s what is so exciting about being in a discipline with virtually no rules. The other big, dump truck of a challenge is surviving capitalism while sticking to an artist lifestyle and identity. Capitalism creates a culture of scarcity in the arts, where so many of us are scrambling for the chance to be seen, let alone supported financially. There is a wealth of knowledge to gain from one another as artists, but the scarcity creates side effects of competitiveness and exclusion. This is unfortunate as it can isolate creatives from one another. Further, the art world has a big old elephant in the room that I only see a few talk about: the issue of who gets to purchase art, and where the money that supports art institutions comes from. As artists, do we want our labor bought with money stained by oppression? I think it’s an important ethical question we need more folks asking.

To me success in art is: to push past comfort zones, to overcome self-doubt, to innovate, to learn from criticism, to stay true to one’s vision, to support other artists, to relish in queerness, to be unapologetic, to define one’s own value, to capture the zeitgeist, to never stop making. It’s an ongoing list. 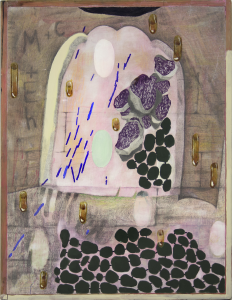 Marisha Lozada
Can you tell me a little bit about you? I grew up…