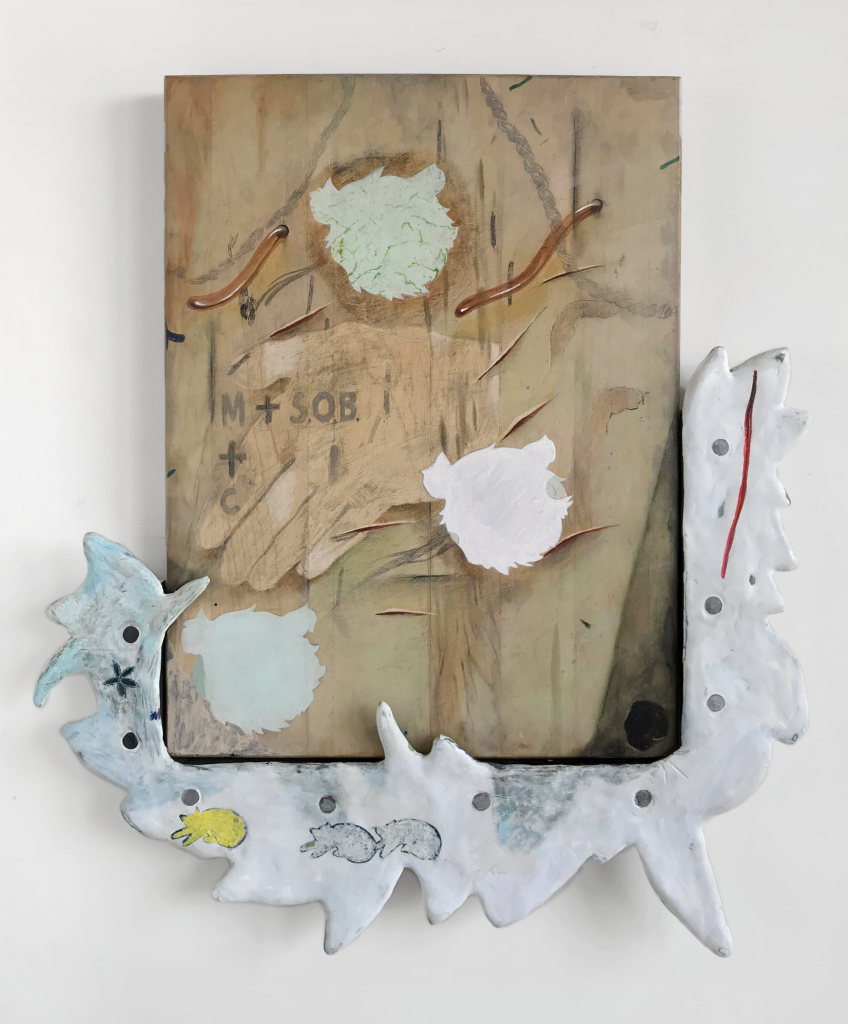 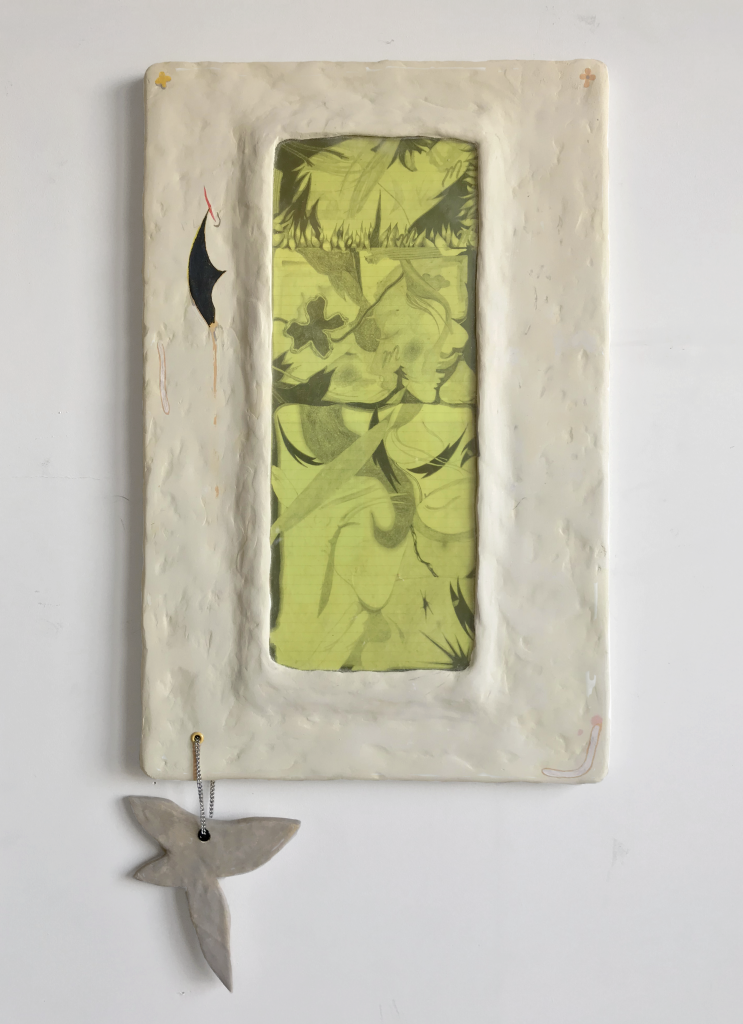 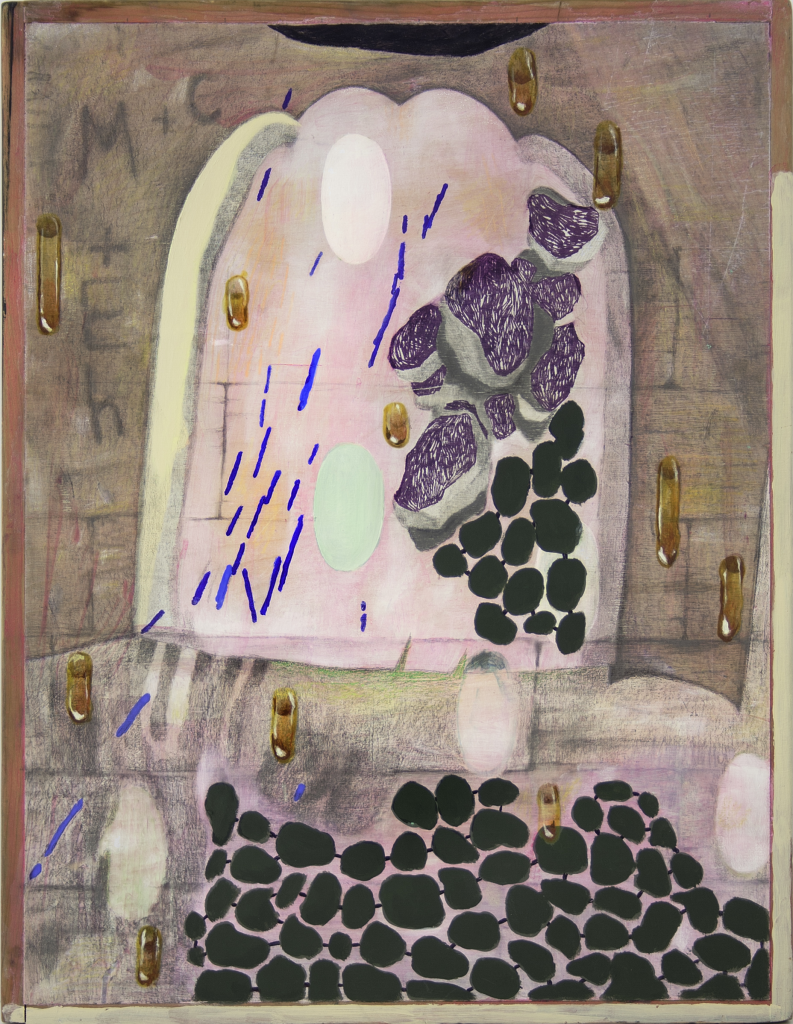 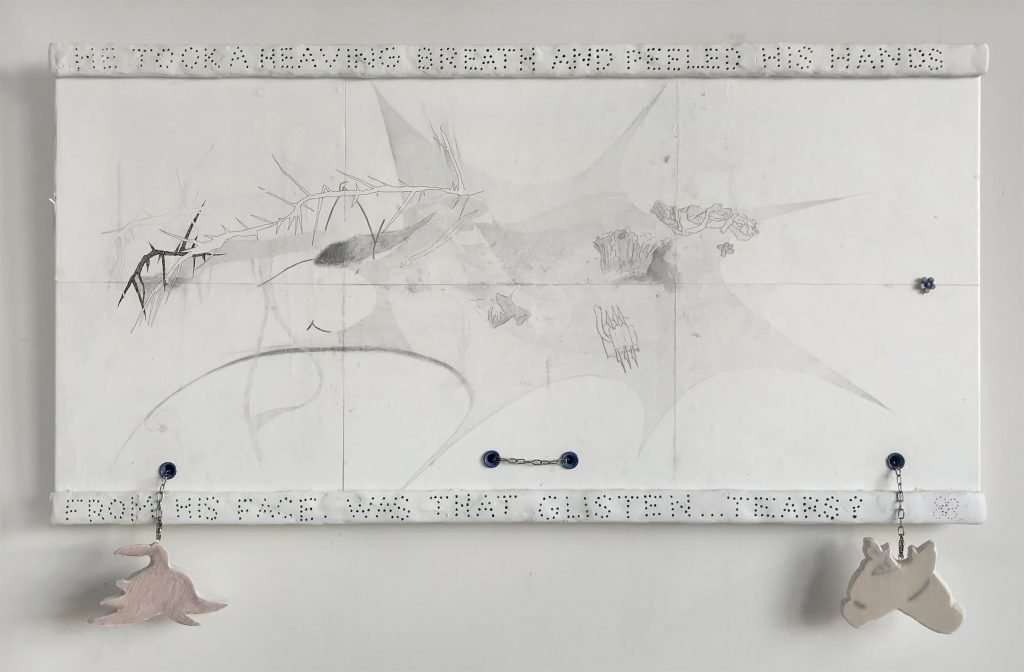 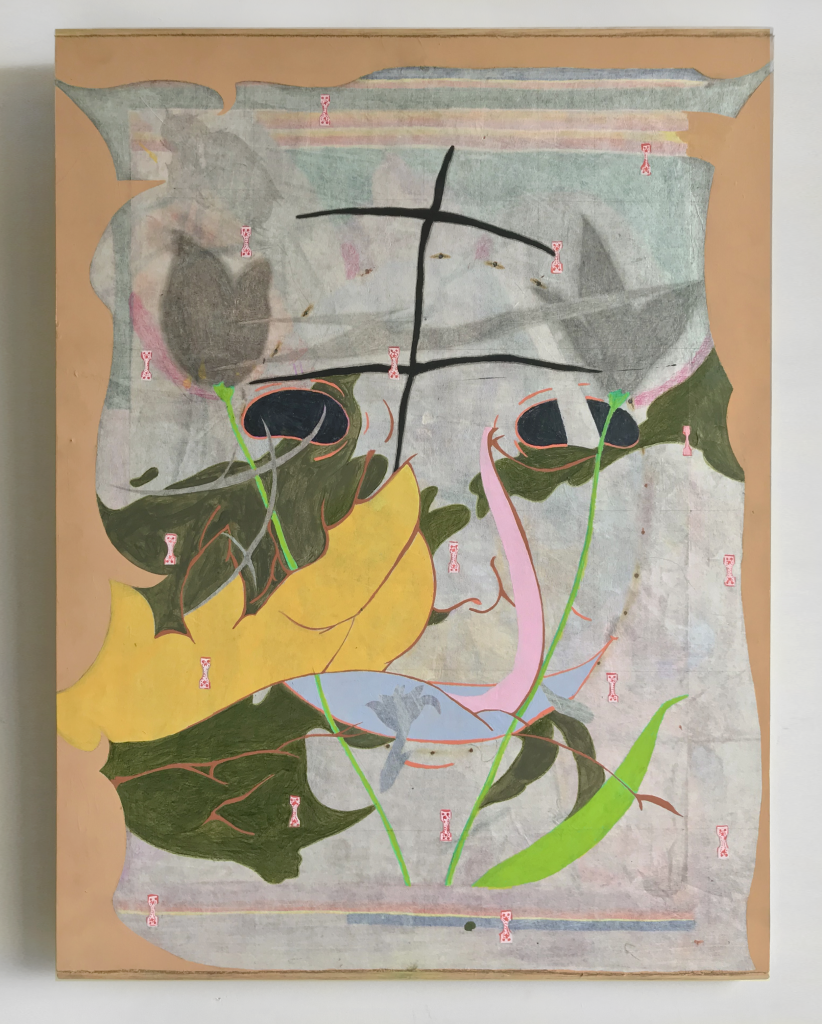 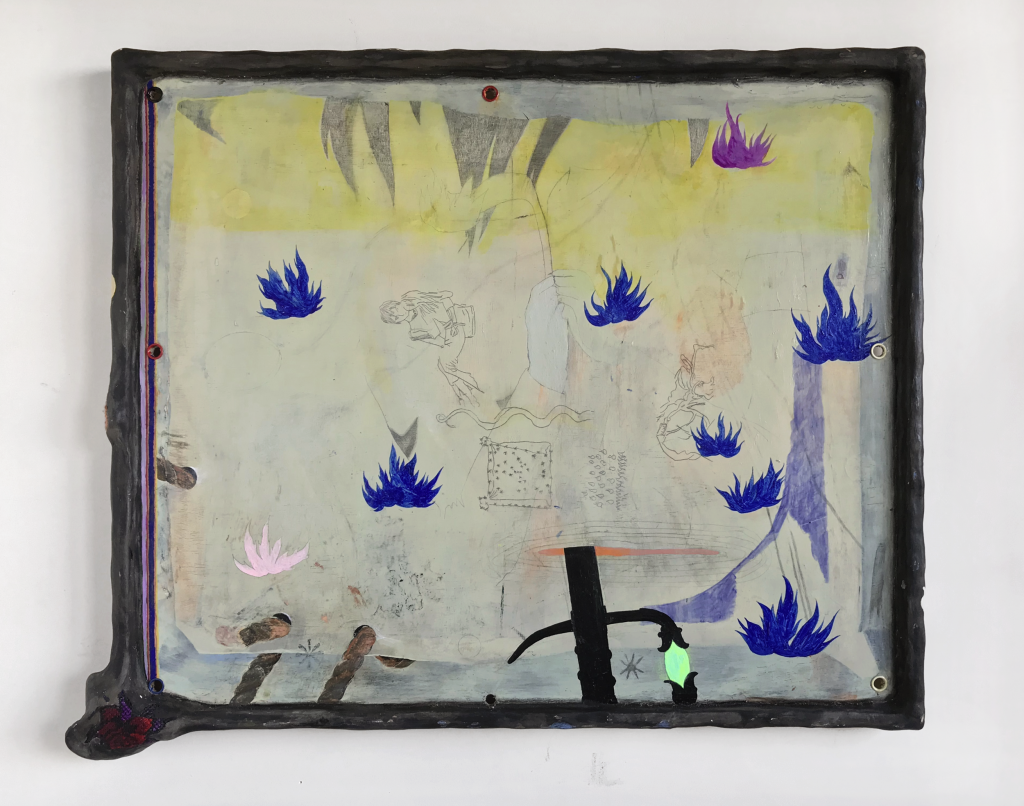 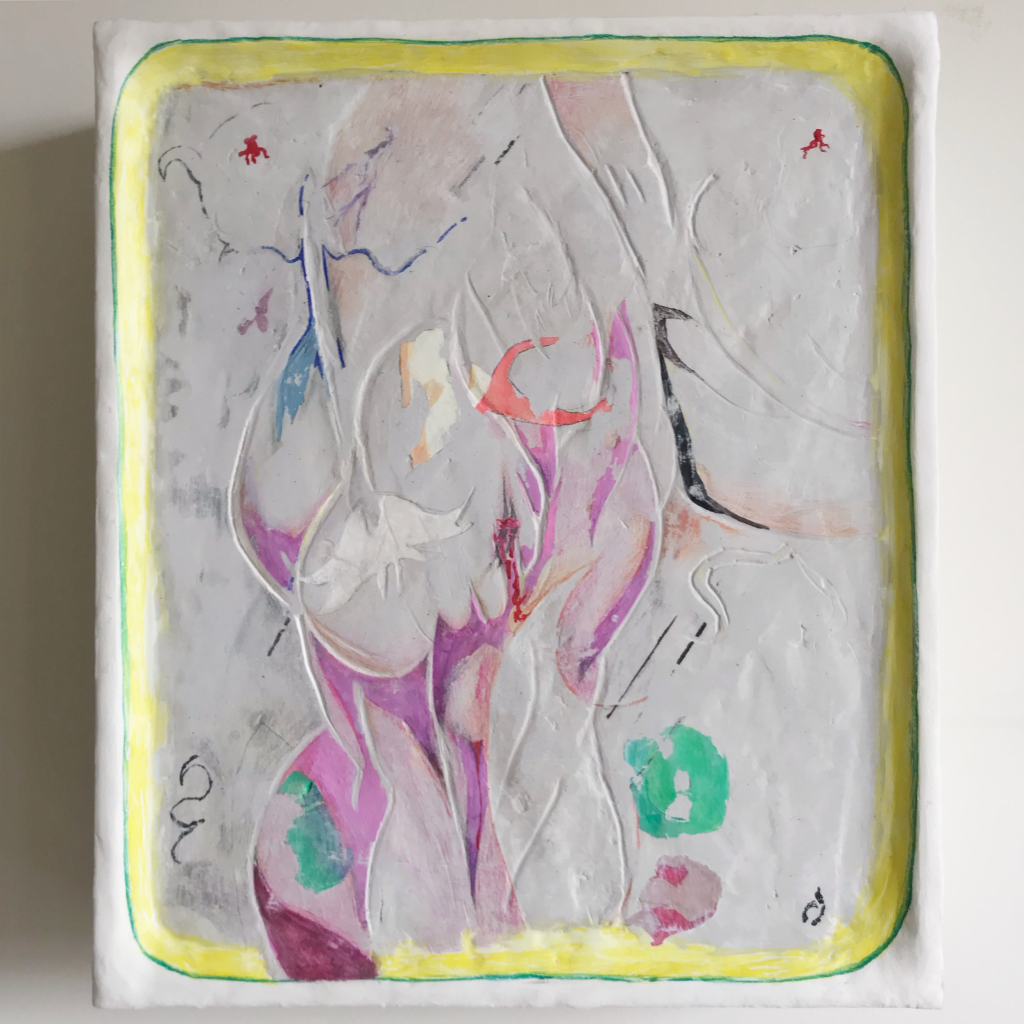 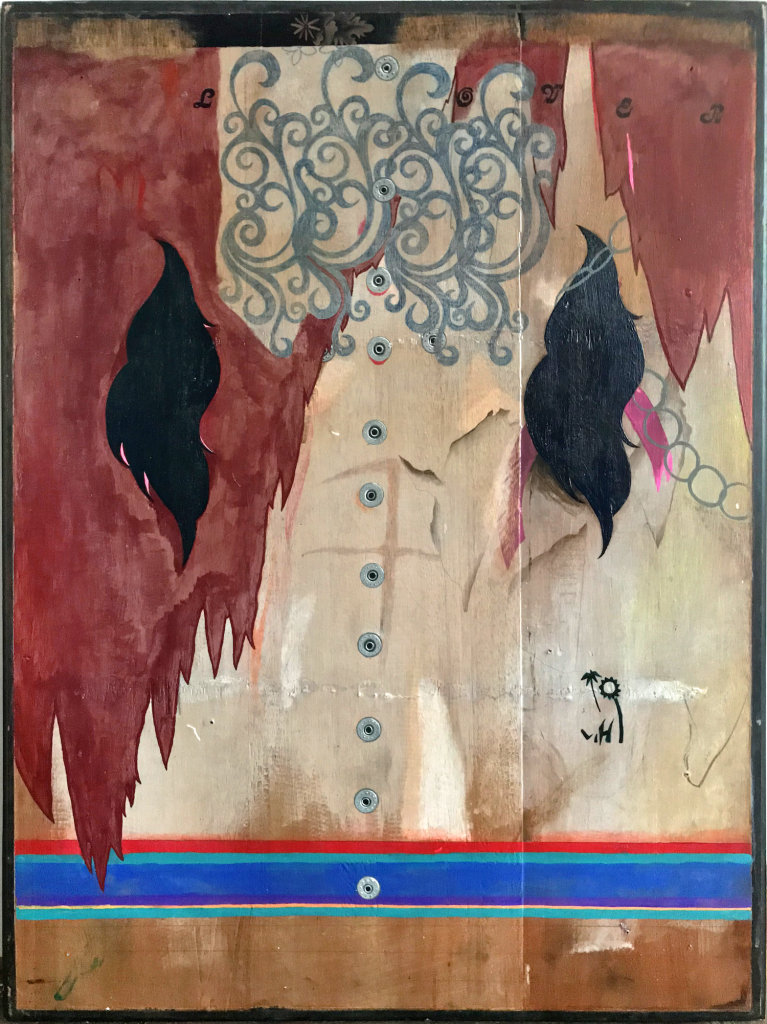 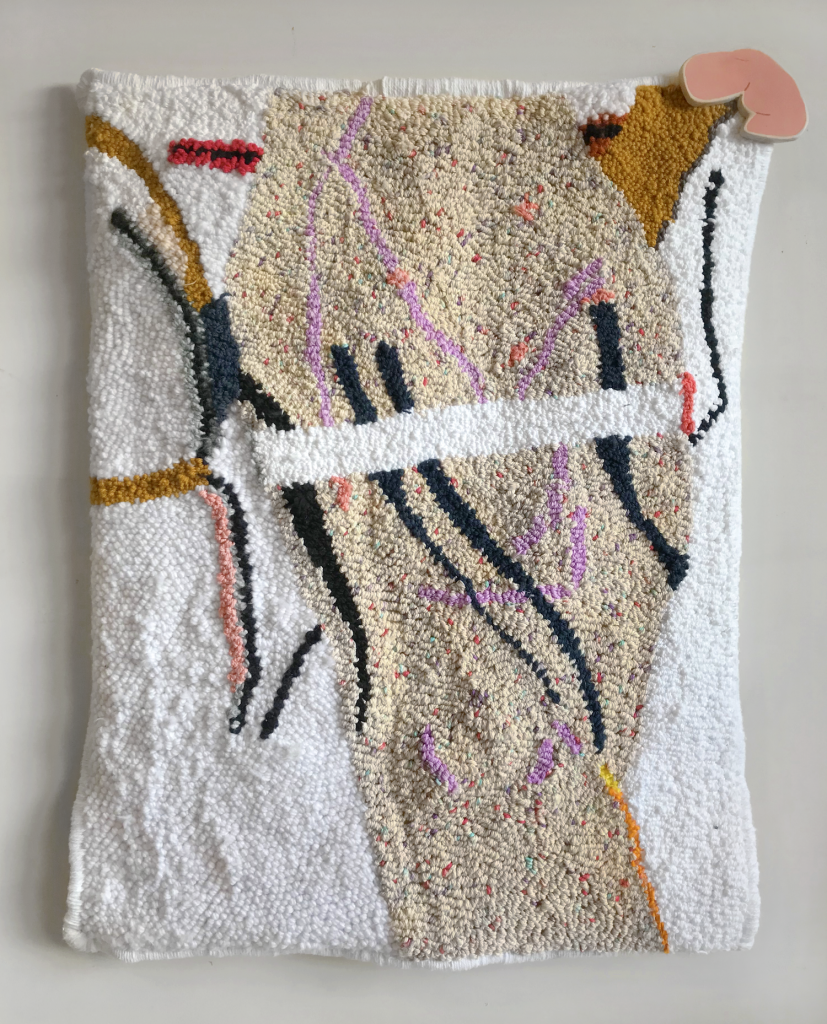 I grew up in the west side of Scranton, PA. My parents are both public school educators–Mom in art and Dad in music–so I had early exposure to fine art and little chance at sports. My first summer after RISD, I stayed in Scranton to save up some money. I worked as a stagehand with IATSE Local 329, where I gained strong opinions on how cables should be coiled and spent a lot of time convincing others I could lift things. I then moved to Philly for a couple years, where I crammed early morning studio sessions before my full-time job at a needlepoint store (and after my evening job as the studio building custodian). Last October I relocated to Brooklyn, which has felt like home ever since. It’s also about to open its first Wegmans grocery store, which means I’ll probably stay here for the foreseeable future.

I explore how emotional truths can be emphasized or manipulated through embellishing reality. I grew up doing a lot of performing arts, and the aesthetics of scenic painting and fake props and stage makeup have definitely influenced my current work. I also grew up in a devout Eastern Orthodox family, which flooded daily life with small rituals and narrative icons that reproduced symbolic imagery across a variety of pieces.

With the theatricality and performance of commemoration in mind, I explore how memories evolve as they’re redrawn, re-performed, blended, and abstracted. Through writing and painting, I unravel encounters with irrational fears, adolescent fixations, wavering spirituality and trauma in an attempt to reconstitute an alternate version of personal history–one that’s more irreverent, or empathetic, or playful. I combine conventions of Orthodox iconography with old fan art, diary entries, and other fragments of the past. By embedding abstracted layers of borrowed imagery, I can negotiate between antiquated traditions and progressive understandings of faith, relationships, and responsibility.

Almost everything begins in writing. I keep a daunting collection of half-finished notebooks, disorganized iPhone notes, and Google Docs filled with scraps of poems from the past decade. I’ve also bookmarked a bunch of phrases from my dark past (fanfiction.net), because there’s nothing quite like dramatic romance written from my middle-school perspective.

As I add to these archives, I take note of repeating motifs–animals, environments, times of day, that sort of thing. That imagery informs a variety of drawings, which I then test out in rugs, needlepoint, carvings, and collage-like paintings to see what materials hold the imagery with the greatest emotional precision. I rarely make any preliminary plans, which is both an exciting and frustrating way to work, but I try to let every piece unfold across its own timeline.

I’ve always been interested in annotation—notes in margins, adjustments to drawings, tweaks to the past through storytelling, and any other kinds of additional information applied to original structures. Re-enactments also fascinate me, especially those that attempt to maintain historical accuracy, because even the most dedicated efforts at recreating the past still impose personal viewpoints and current cultural hegemonies onto history.

In the realm of history and annotation, I think a lot about both fanart and Orthodox iconography. In my current work, I often reference my old DeviantArt account—a (now hidden) archive of (retrospectively homoerotic) imagery. I used to be particularly obsessed with this one character, a kind of goth girl who carried throwing knives all over. And I mean draw-her-a-lot, usually-in-very-sexy-outfits obsessed. Looking back, she was something of a first woman crush, which I didn’t realize at the time because of compulsory heterosexuality and because I thought homosexuality was a sin and, you know, she was just a cool girl character, whatever! So in my work now, as I engage my current self with the past, I can incorporate sections of that old fanart from a perspective that admits more truth: my middle-school self thought Mai from Avatar was hot, and that’s okay.

As far as Christian symbolism goes, the imagery and spirituality of Eastern Orthodoxy still impacts me, even as I reject the oppressive potential of the conservative, patriarchal religious institution. Creating Orthodox icons is referred to not as painting, but as writing: translating complex sacred narratives from archaic designs. I think those elements of iconography interest me most—their historical lineages, the rituals of their creation, and how people form almost personal relationships with them. I keep all that in mind when adding elements from my own life (such as fanart) in artwork. Through synthesizing and layering this imagery, I can release memories from their original contexts and ultimately suggest new examples of what I deem worthy of veneration.

I wouldn’t say that I had to do it, but a few years back I made a piece that was essentially a trash cosplay of Antonio Banderas in Desperado and re-enacted the movie intro scene-for-scene in my bedroom. I shot it with my photobooth webcam on final wheezing breaths of my dying laptop. It now lives on a throwaway YouTube account and has enjoyed meager views and only one creepy comment.

Other than that, I briefly assisted an artist who had me power-wash their warehouse studio floor on my second day of work. I was tasked with corralling a massive, filthy puddle of water with a snow shovel so that it wouldn’t leak down the slope of the floor and mar the artist’s work. I did not inquire as to why he didn’t power-wash before moving everything into the space.

I’m studio manager of a handcraft school and general store in Gowanus, which has been a really lovely environment to learn about textile arts. I also participate in the work-exchange program at Endless Editions, a risograph press in midtown. Looking over my past jobs, I’ve gained the most from positions that are related to something creative, but still maintain a degree or two of separation from the professional art world. Otherwise, I find it difficult to focus on my own art after leaving work.

I try to remember that artmaking is a process, which is a sentiment RISD really emphasized. I constantly have to remind myself that I can approach an idea as many times in as many ways as I want, in as many different ways, and nothing has to be perfect on the first try.

Rest and space are both necessary. I sometimes feel guilty for ditching studio in favor of reading trash novels, or obsessing over shows, or taking aimless walks, but almost any experience can serve to inform art. And art can unfold in a multitude of ways. Sometimes I don’t feel like making paintings, but that doesn’t mean I stop creating—that energy just shifts toward writing poetry or making costumes or playing piano or doing comedy. If you feel particularly drawn to something outside your normal method of creation, let yourself follow it.

My studio is a drafting table tucked into the corner of my bedroom. (It’s set at a slightly steeper angle than I’d like, and things keep sliding off. I will eventually get around to adjusting it.) Two bookcases store my supplies, and finished works live on my wall or closet shelf. I carve wooden panels with a precarious setup of clamps and tools, and have only suffered one minor coping saw injury thus far. I keep sawdust under control with a Dustbuster that I regularly neglect to charge. A stained water jar always holds at least one unfortunate brush—I only use cheap brushes because I am somehow incapable of cleaning them regularly. Every so often I give the whole space a deep clean, which lasts maybe two days if I’m really, really lucky before descending once again into chaos.

I always thought working in my room would feel too stressful, but apart from size constraints, it suits me more than I expected—I can paint early in the morning or right before bed, and it’s only a few feet from my kitchen. In an ideal world, I’d have a separate space and woodshop for large projects, and would only create sketches and smaller pieces at home. But for now, my current setup works well enough.

Terrible instant coffee is important. So are the Sims 2 soundtrack, really loud thunderstorm sounds, and old reggaeton. If I’m feeling stuck or precious (which is often), I begin a studio session by creating unfocused drawings. I clear my mind and absently layer image fragments from photo albums, screenshot folders, and old sketchbooks. Usually about midway through a drawing I start feeling a specific direction or tone or meaning, and then I’m able to start engaging and building upon that more deliberately.

I made a zine! I actually made two zines! This is objectively not a grand feat, but I’d been talking about making a zine for years prior. I don’t know why it took me so long, or why I took the process so fucking seriously. But they finally exist, and I’ll be making more.

Right now, I’m working on some longer writing projects. Every year around autumn, I tend to step back from visual artwork and explore my interests within other media. I really want to incorporate more narrative elements into my work, and writing those narratives out out will hopefully lend solid direction for future paintings. 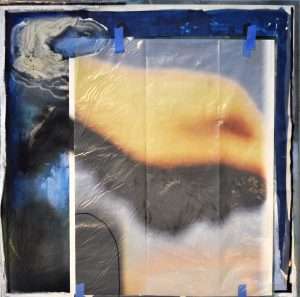 Douglas Breault
Can you tell me a little bit about you? I currently split…