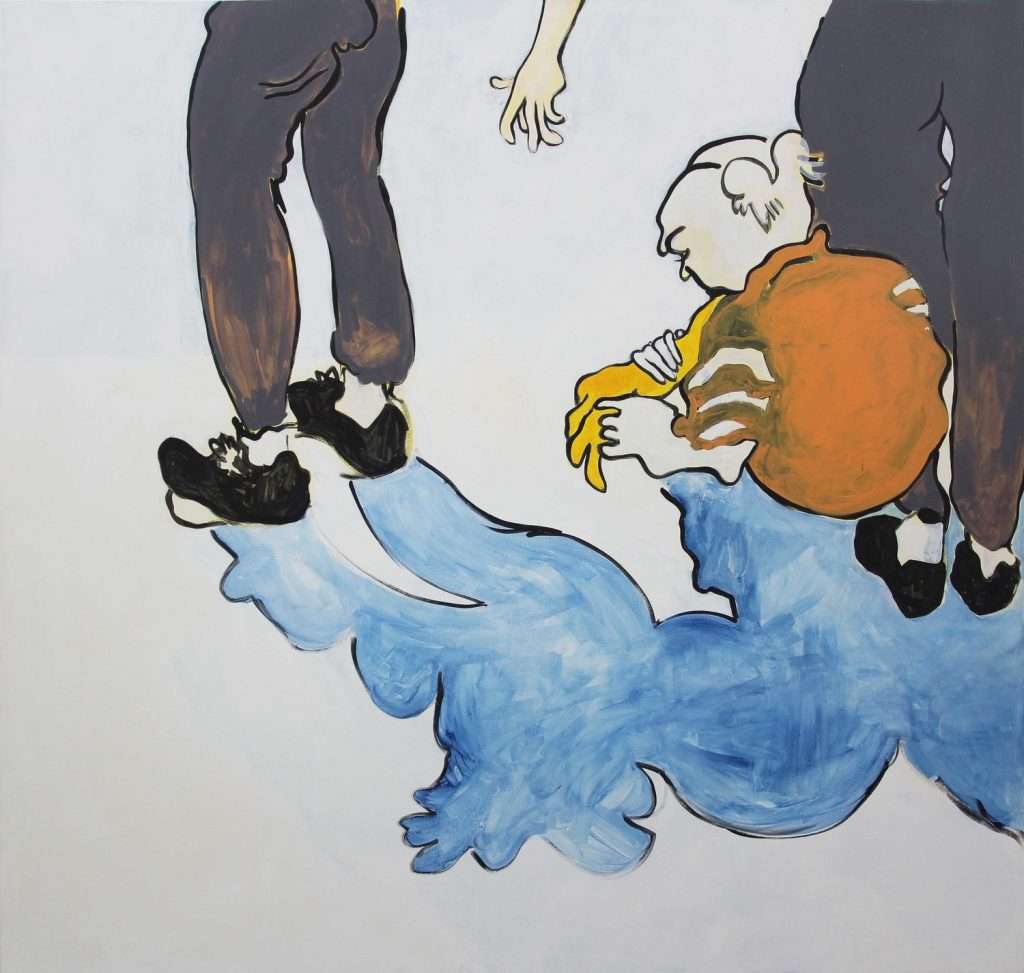 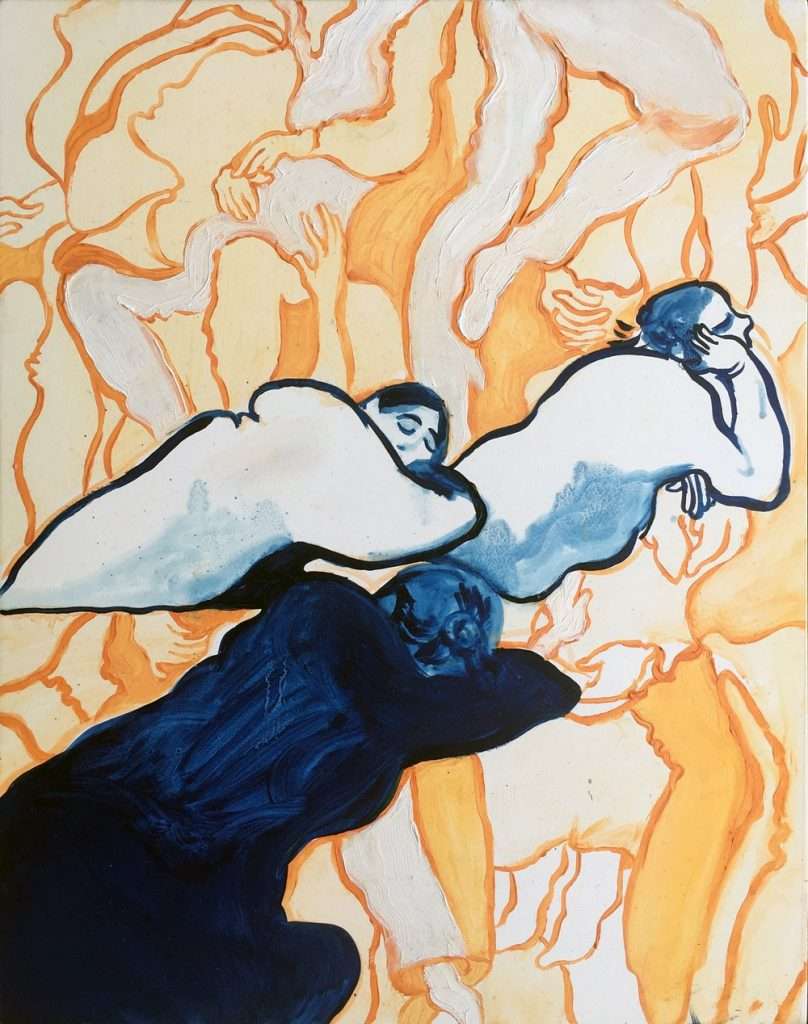 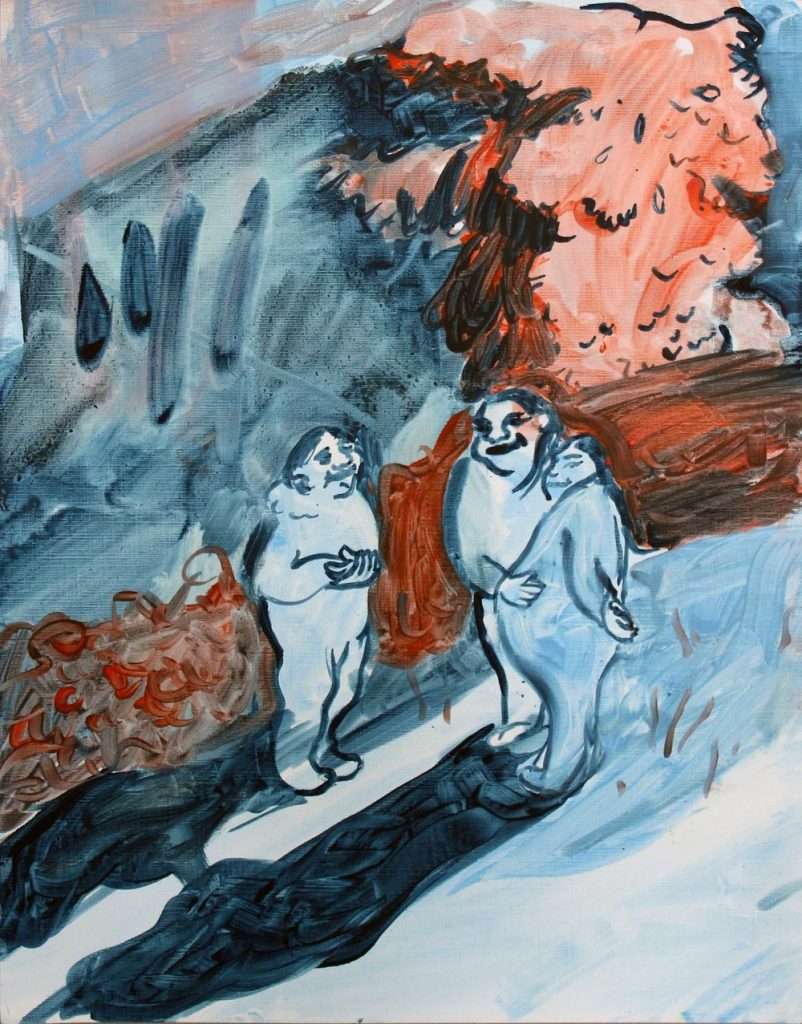 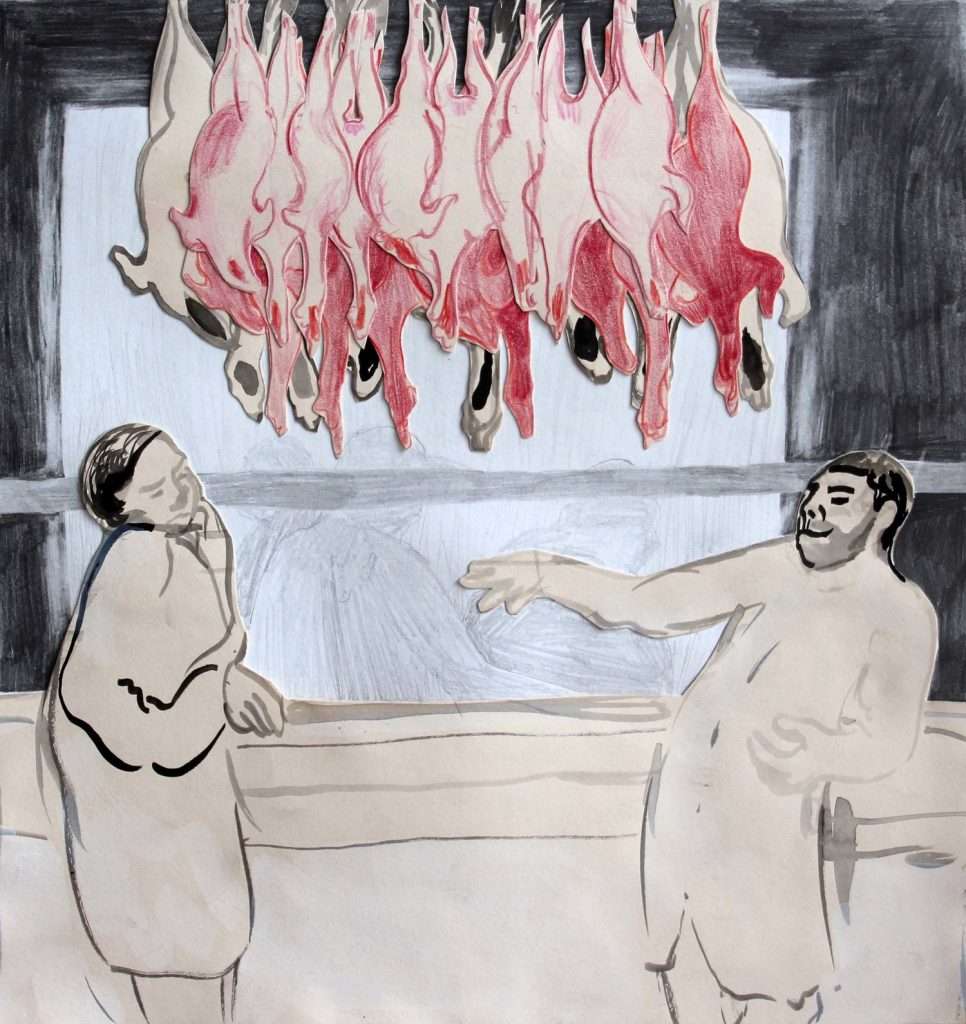 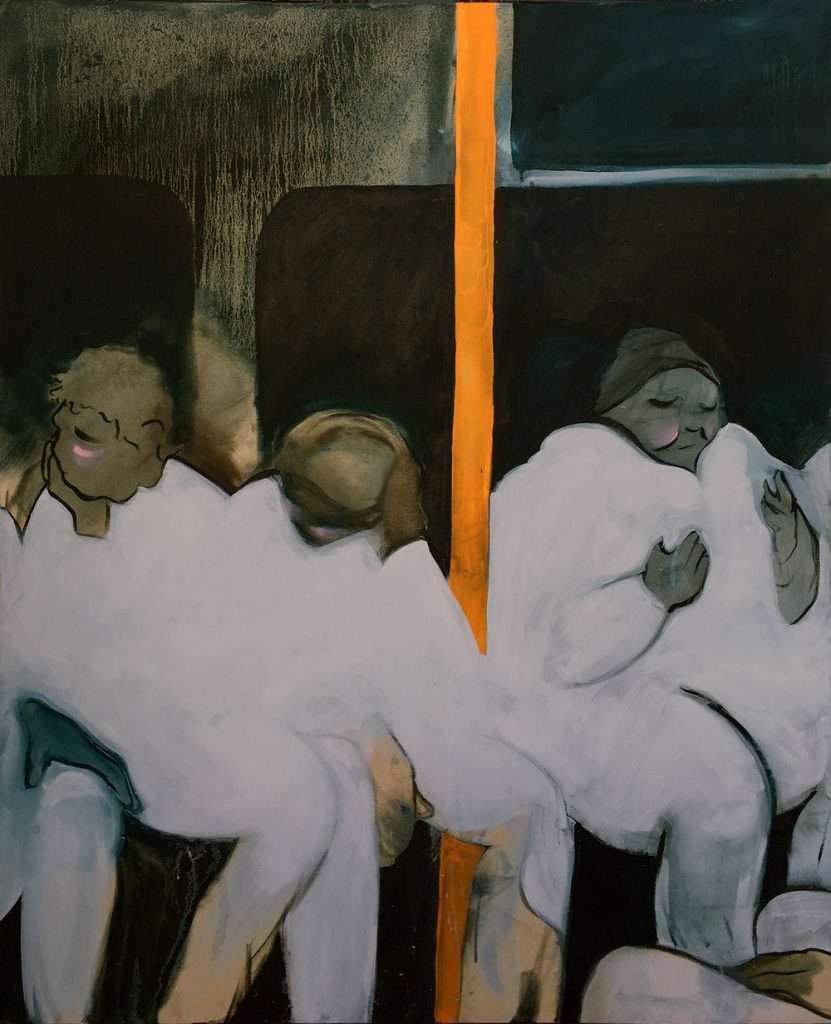 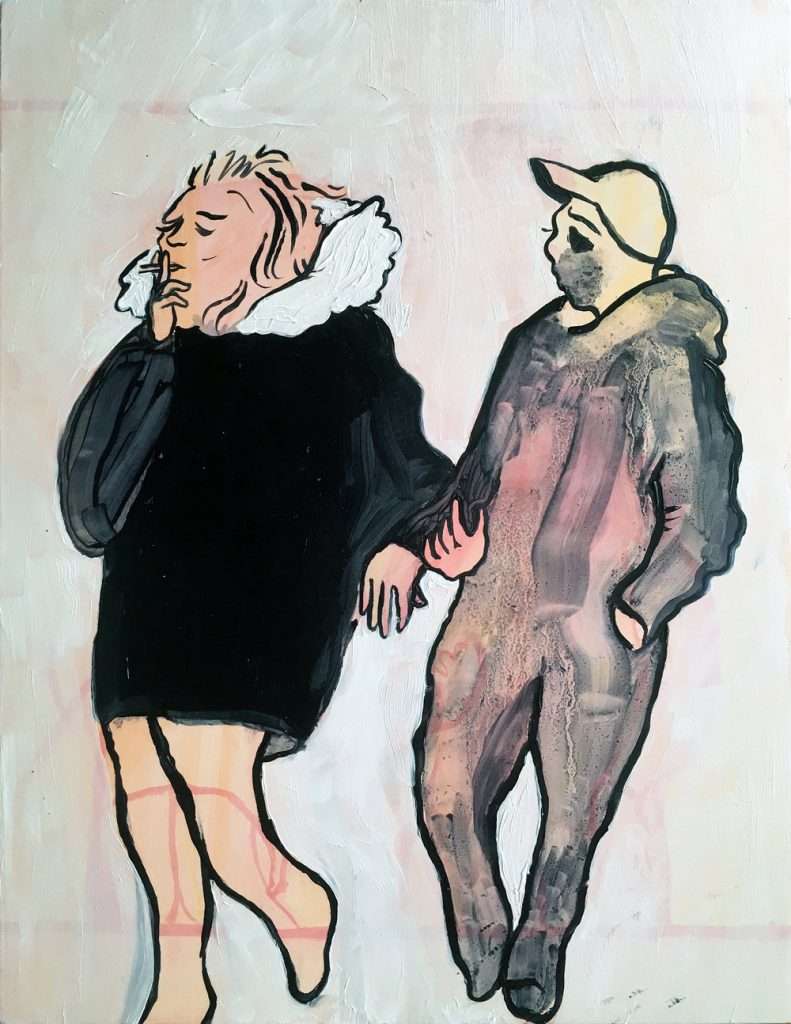 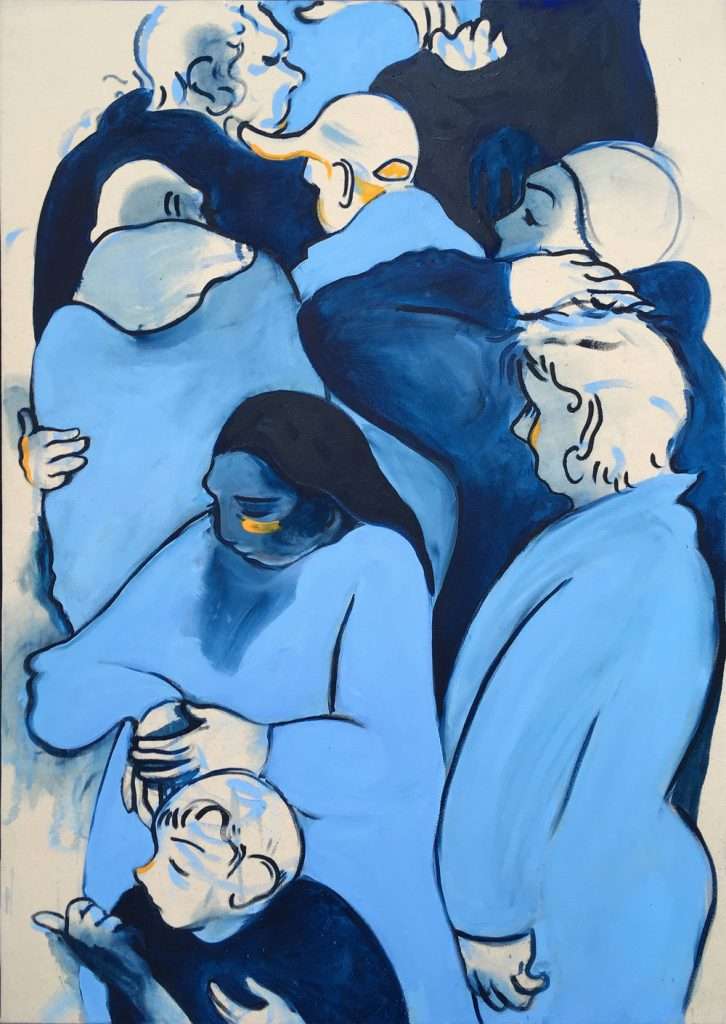 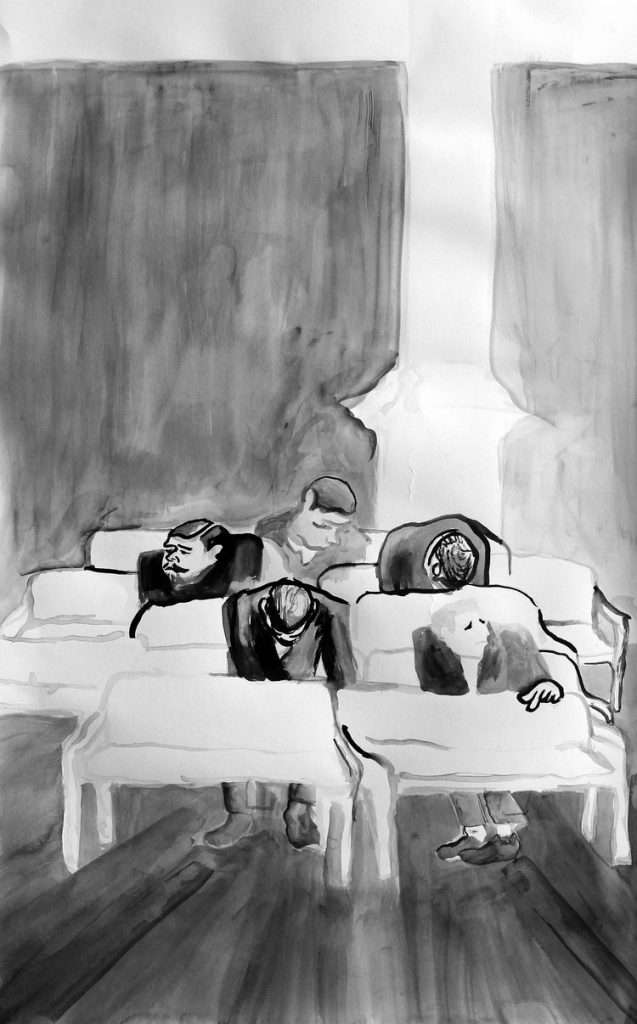 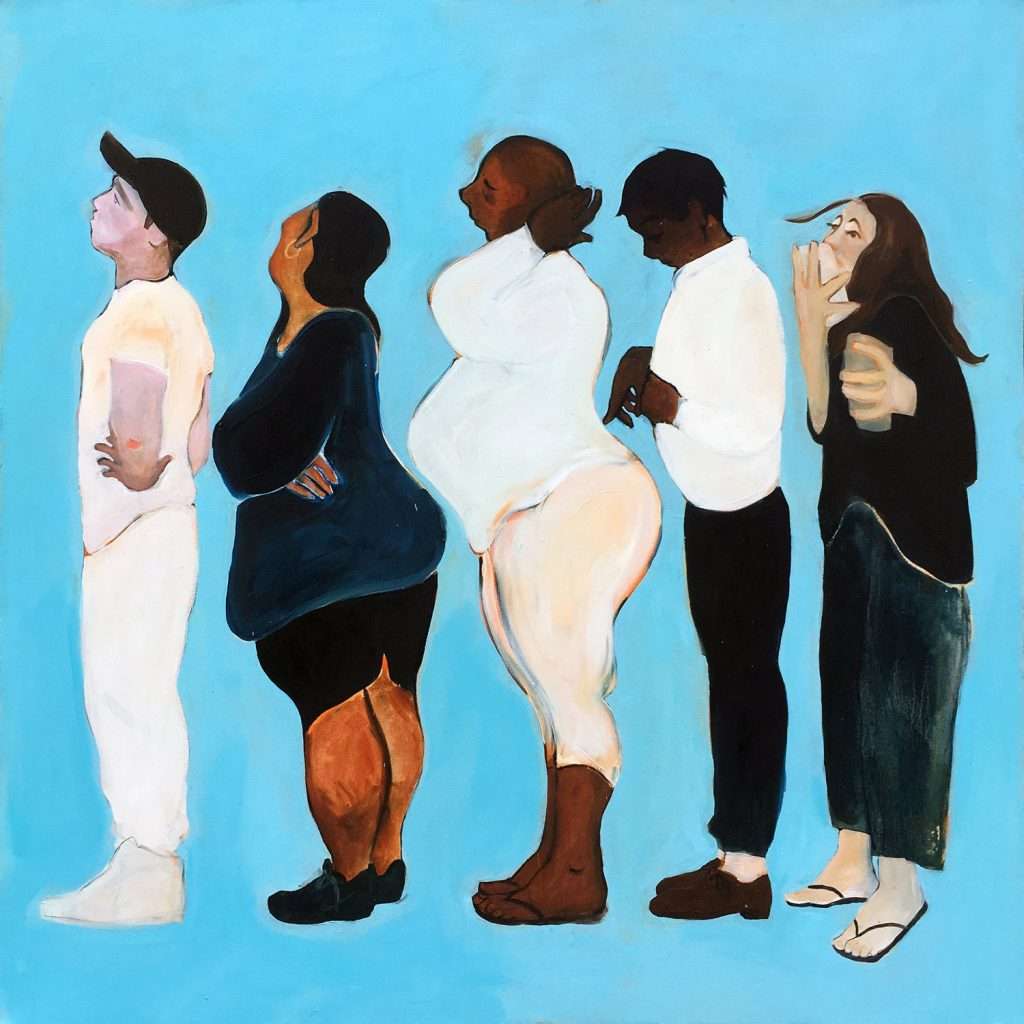 I grew up in South London and briefly left for 3 years to go to Brighton University to study Fine Art: Painting. After that I moved back to London where I made work for a few years, I also attended the Royal Drawing School for a short time. I moved to Canada 2 months ago.

I considered it as an option as a child then by about the age of 13 I was pretty certain. It made those years where young people have lots of pressure put on them by adults to decide their future much easier because I already knew what I was going to do.

London was a great place to work because my art is mostly based on observational drawing so there were of course excellent people watching opportunities and I’m not sure what makes Canada a good place to make art-work yet, apart from there is definitely much more space to make it in.

I’ve had the same process for years, but I’ve only recently managed to articulate to myself (with words) what the subject of my work is. My work is generally concerned with the observation of collective groups of people and their emotional and physical experience of their environment. It took me about 3 years to string that sentence together.

Geographical change is always a benefit to my practice. As I’ve said my work means I spend a lot of time observing people, so moving to a different continent is excellent for the new things I learn about in people. The people in the part of Canada I’m in fits pretty neatly into the stereotypes and portrayals we receive in the rest of the world about North America.

Someone put latex all over me then cut it off with a real scalpel in a pretend operation and filmed it. I also did a drawing whilst in a swimming pool. The lifeguard came over and asked if I was okay and if I had problems with my mental health.

I have had many jobs that I split my time between, jobs in the art world and jobs far away from it. Generally none of them interfere with my practice much. I find it best to work at anti-social times, it’s hard to stay disciplined as an artist but a good way to go about it is to make yourself purposefully unavailable at times that people would like to see you, and have nothing to do in the days when all of your 9-5 friends are working so you can get on with making art uninterrupted. I would definitely say however some of my friendships have suffered as a result.

I had a really great tutorial once with a visiting tutor (artist Anna Ilsley) in my first year at university. I wasn’t sure what I should be doing, because I thought I was supposed to have a clever idea first then visually pursue it. She told me to stop worrying about it and just go hang out at the swimming pool and draw. That’s basically been the basis of my practice ever since.

I find exercise to be a good antidote to feeling stuck.

I would say community is a basic necessity for individuals’ well-being in society. I had a similar stance in regards to art, until I realised I couldn’t afford a studio after university and that I would have to make work by myself at home. It’s not preferable though.

I’ve just moved country so don’t have one right now. I’ve got a good balcony though which is filling in well in the meantime.
Do you have any routines or rituals in the studio that get you into the mode or mindset to make your work?
I am most intelligent between 7.30 and 10 in the morning so I try to get any writing based work done then. After that it’s steadily down-hill but I can make art until about 4 or 5, when my brain turns off entirely. I’ve always thought my early disposition is wasted on my career choice as an artist, because literally no one cares what time I get up. This is very boring but I like to listen to the sound of a fan because it drowns everything else out.

Art School was mostly a process of exploring ways of making art that didn’t work for me. I guess you have to get that out of the way at some point. I haven’t done an MFA because after my undergraduate I didn’t feel too enthused about getting into even more debt to hang around in a studio for 2 more years and be visited once a term by a tutor. I do plan to do one at some point I think, but I’m not there yet.

The constant feeling that I could be contributing to society in a more effective way. It’s kind of like a Catholic guilt complex mixed with narcissism.

Success is pretty slippery. I have a suspicion that it’s a constantly changing set of achievements that you can never catch up with.

I would say something that I have achieved would be determinedly producing a body of work for a solo show despite not having a studio, or bedroom for that matter. Now I have the pleasure of retrospect AND a bedroom, it’s a valuable piece of knowledge to know how badly I want to make art-work.

I finished a few pieces a couple days ago so nothing right now, but I am thinking about branching into ceramic, I’m planning to make tiles with tessellating bodies on them. 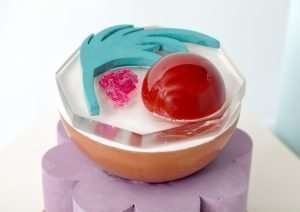 K. Lynn Chang
Can you tell me a little bit about you? I was born…