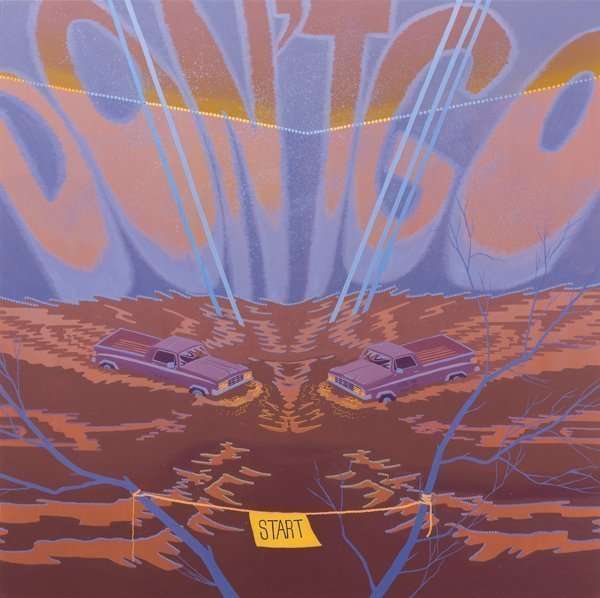 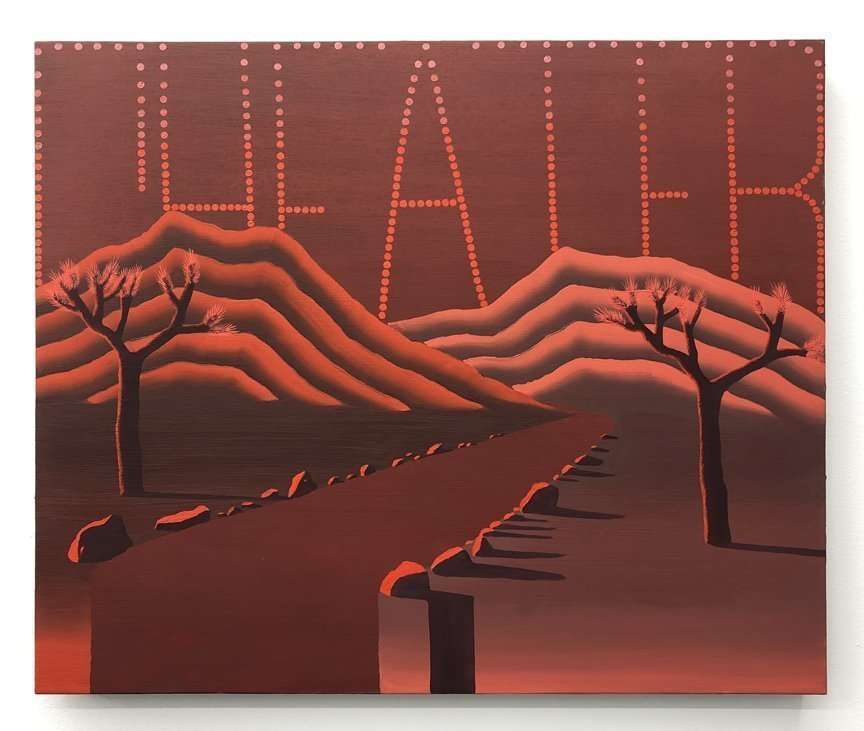 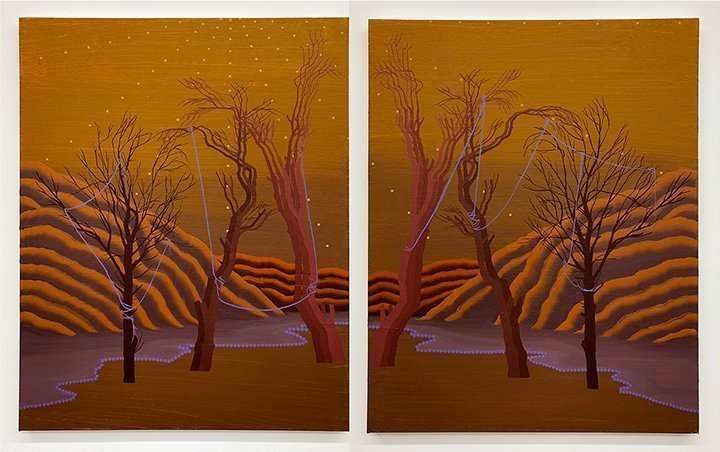 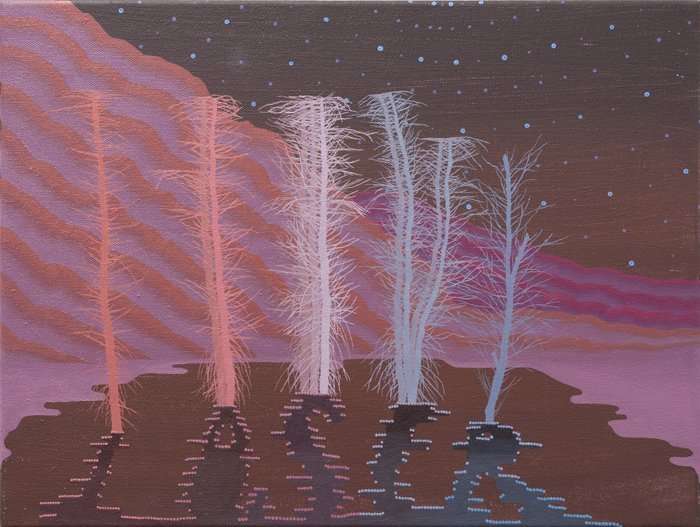 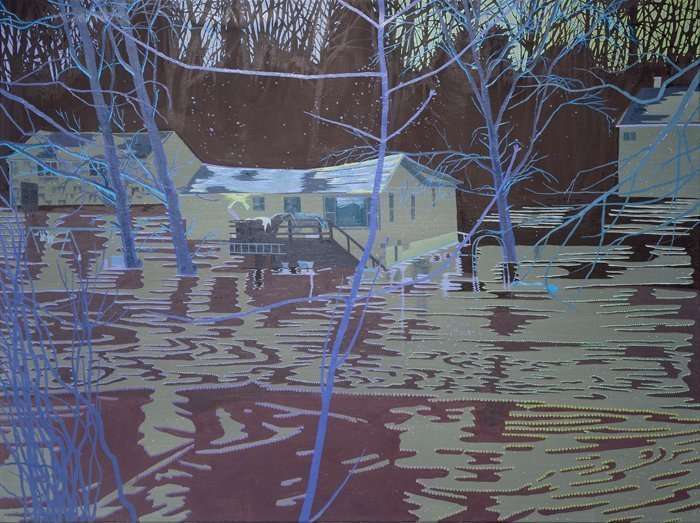 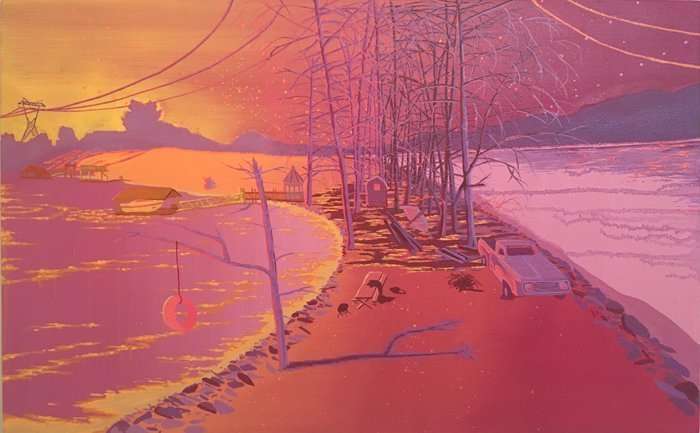 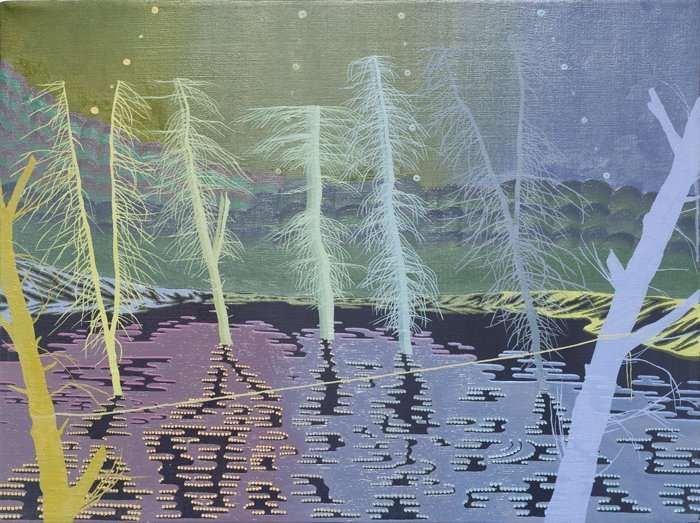 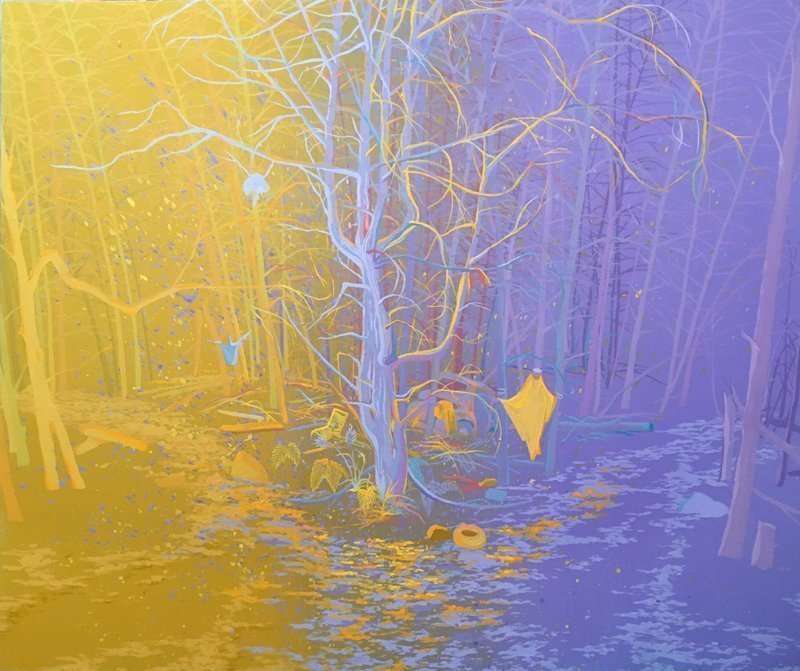 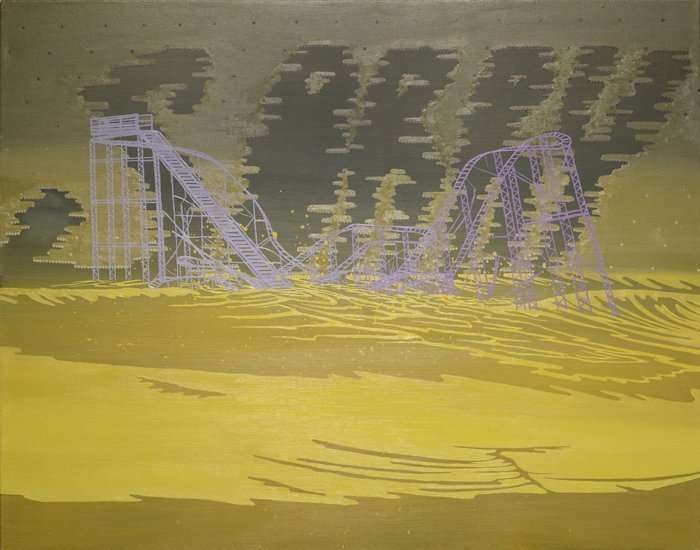 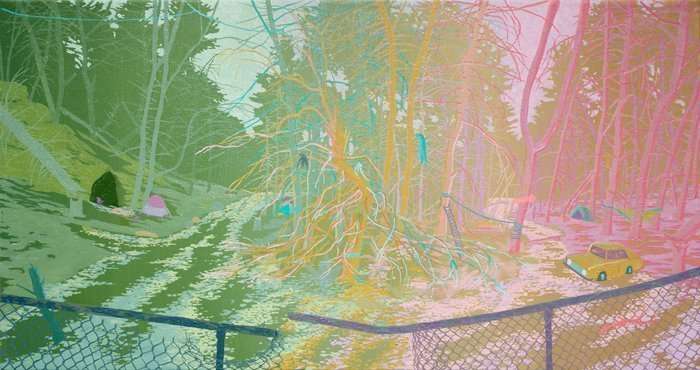 I’m from Lincoln Park, New Jersey, and am currently based in Ridgewood, Queens, with a studio in Bushwick, Brooklyn. I graduated with a BFA in Painting & Drawing from SUNY Purchase in 2011 and have since taken many continuing education courses in arts administration and the art market, and completed a certificate in Small Business & Entrepreneurship from Hunter College in 2018. I’m also a vocalist in a band called NEVER, and two of the members are my roommates. My studio practice has largely been influenced by my experiences in nature and the suburbs of my youth, so I leave NYC as often as possible for inspiration in the woods.

I’ve been creating both visual art and music for as long as I can remember. I’m an only child of divorced, working-class parents, so I spent a lot of time alone as a child, often drawing what I saw, making things out of any materials at hand, and learning to play instruments. Someone I met in high school just before applying to college brought me to the Museum of Modern Art for the first time, and enlightened me to the fact that visual art was more than realistic representation, which is all I thought it was up until that point. This opened up my curiosity greatly and led me to apply to art school (previously, I had wanted to become an architect).

I’ve been working and/or living in Bushwick for over eight years, and I still find it to be full of incredibly inspiring artists, galleries, and events of all types and stages. Accessibility to quality art and music shows and studios is extremely important to me in terms of inspiration and collaboration.

I’m currently exploring how human perception can be interwoven with landscape in unexpected ways. I have always focused on psychology and sociology as vehicles for arriving at my compositions, but in the last three years I have shifted away from depicting those interests in figures and instead manifest the same interests in landscape. I aim to create delicate but often gritty environments that are ambiguous but imply previous human intervention with nature – broken fences, abandoned tents or rafts, trees tied together with rope. All of these acts stand in for very personal investigations of myself and those around me, while also hinting at larger issues of climate change and potential human extinction.

My research largely consists of culling photographs I’ve taken of emotionally significant locations, and googling images of natural disasters. Most of my paintings are very labor-intensive and take about a month each. My drawings are much smaller and easier to complete, usually taking just a few days. I tend to work on drawings simultaneously along with one painting, as they often impact one another during creation.

In general, surrealism has become a prevalent consideration in my practice as of late. I have always had difficulty creating entirely unrealistic imagery, and thus I’ve been looking at modern and contemporary artists that utilize impossible perspectives and forms to create dreamlike narratives in their work.

I’ve also been a curator for eight years in New York… so the list of strange things I’ve done to produce exhibitions is endless. The one I always come back to, though, is the time I had to dump tanks of water and dead leeches into a sewer with my two colleagues when we ran a small space in Bushwick.

I’ve worked as gallery manager for both contemporary and secondary market galleries for about seven years, and in between have managed artist studios and done freelance art handling jobs. I’ve also directed several artist-run spaces. I believe my understanding of the inner workings of the art market and ability to analyze art as a direct result of my jobs has been both helpful and hurtful in various ways. Many of my managerial positions have been quite public but for another business, which I feel often leads to people viewing me as a gallerist rather than an artist since it’s literally what I’m doing when people see me the most, however, many personal relationships with art world professionals have come from these positions, which have lead to many opportunities to me as an artist down the line.

I do have mainly a few mentors who have been by my side since undergrad. Our friendship has lead to many career opportunities for myself in various ways. I think it’s very wise, as a student and after, to form and maintain bonds with professors who have active careers in the art world. They can help you endlessly.

Create or join a supportive group of peers who you think are doing better than you. Support systems are invaluable, and every art historical movement has been born out of groups of unconventional thinkers and doers who band together to change the system if it’s not working for them. Institutional support for young artists is becoming more and more scarce in the United States, and I think the only way to change that is to disrupt the system.

I find it very important to constantly engage in conversation with your peers about art and culture. It’s how your work can remain relevant and/or challenge convention. Conversation, seeing other art and music shows, intimate dinner parties, late-night city bar crawls… all of these experiences have had a huge impact on my work. I don’t believe anyone should be making work entirely in a vacuum separated from society and cultural movements as a whole.

My studio is a somewhat long and narrow space that is adjacent to the artist-run space that I direct (Transmitter in Bushwick). I have windows (unlike my last basement studio) but they look into a loading dock. It’s secluded and very quiet which is so important to me, but it’s also next to my day job and only a mile from my house, which is very important as I have a fairly busy weekly schedule. Because I do so much administrative work for Transmitter, a good amount of space in my studio is dedicated to that, storage, and tools. It feels a bit like a shared office and studio.

I often spend one full weekday and then half a weekend day and one or two week nights after work in the studio. What I listen to varies throughout the year, but right now it’s often monastic chanting. Long, repetitive, ethereal songs help put me into a bit of a trance that helps maintain my focus on the repetitive dots, lines, etcetera that I make in my work.

I have touched on this in a previous question but to elaborate, receiving my BFA at SUNY Purchase was incredibly impactful on my career. So many of my current peers and best friends, I met at Purchase. I haven’t pursued an MFA largely for financial reasons, but also because I know I am more productive and a better learner by doing than by sitting in a classroom. I inserted myself into the gallery system as a worker, not as an artist, unfortunately, but I have always wanted to take unconventional approaches to my career.

I have realized that I am much more confident and simply better at talking about work by other artists than myself. I think I’m generally a modest person, and thus don’t often take the opportunity to talk about my own work when I can. And unsurprisingly, making art in one of the most financially prohibitive places on the globe poses a myriad of issues. I’ve moved apartments and studios around ten times in eight years and have had to compromise a lot in order to afford a space to make work, and having to always keep a day job or two has limited my ability to do things such as residencies much which I know would benefit my practice.

Ultimately, enjoying making art is a success in my mind. Not considering it a “job.” I think once the gallery market dictates what you make, that’s when the original intent is lost, and I don’t think any amount of money can supplement that loss in integrity. Success is truly believing in what you make, and if others take note of that, that’s a bonus.

A few things come to mind – a month-long residency I did at Studio Kura in rural Itoshima, Japan was incredibly influential to both my personality and my artistic practice. My appreciation for nature, solitude, and other people was forever changed. Career-wise, a solo exhibition I had at PROTO in Hoboken, NJ in early 2018, which was preceded by a coincidental 4 months of nearly full-time art-making (due to being fired from a previous job and given severance and unemployment, and being able to work for artists off the books) allowed me to focus so diligently on my work, and I was also able to use the huge gallery space to consider three-dimensional work for the first time. That experience felt like a true culmination of years of work.

Yes, I’m one of currently seven members of Transmitter, an artist-run space in Bushwick, Brooklyn. I’m also building an art advising and artist resource business on my own, which I plan to launch at the end of 2019.

At this very moment I’m concluding a two week residency at Highly Authorized, an artist compound in Ellenville, NY that a close friend of mine runs. I’ve been working on a new painting diptych that I plan to finish when returning to NYC. I’m building up a body of work of paintings and small 10 x 8 inch drawings to display at a two-person show at Hudson Valley Community College in spring, 2020.

Thank you for supplying these questions, it’s been incredibly informative to myself just to sit down and think about them! 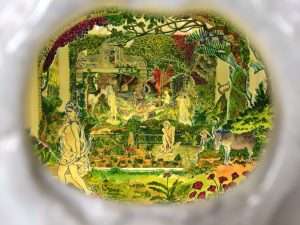 Serena Perrone
Can you tell me a little bit about you? I was born…