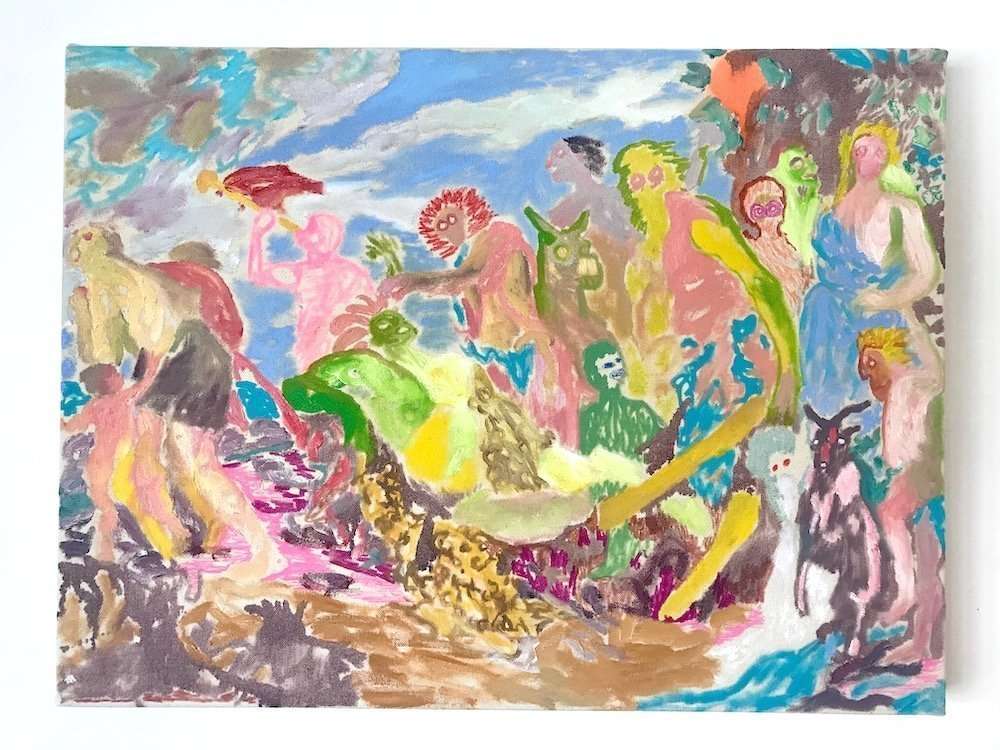 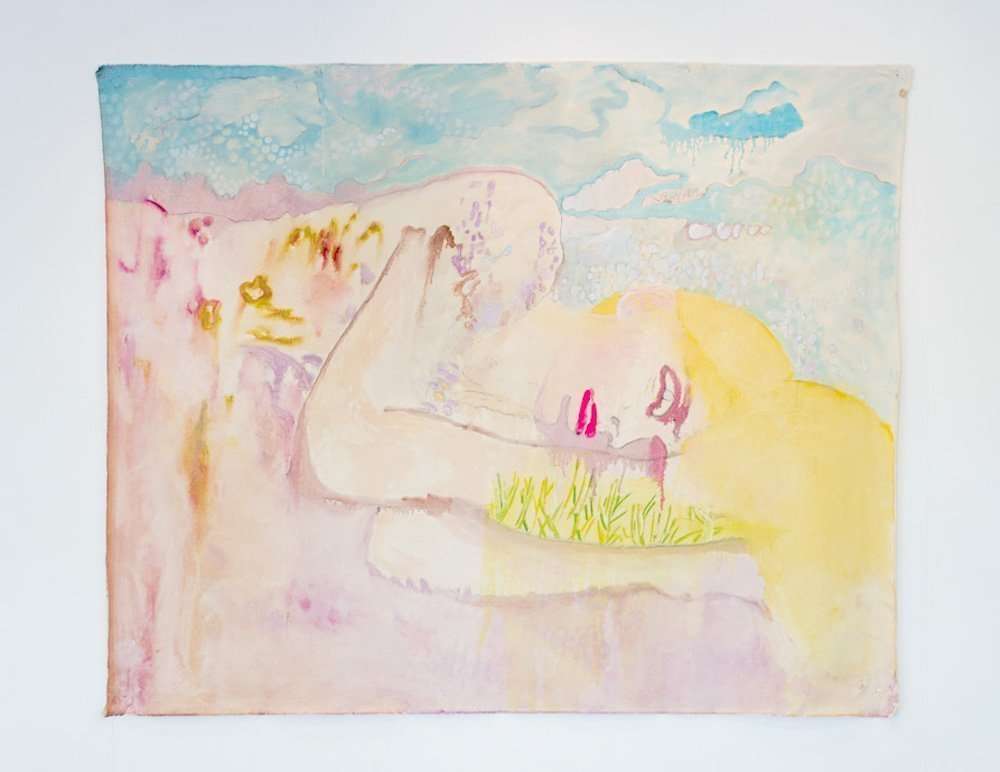 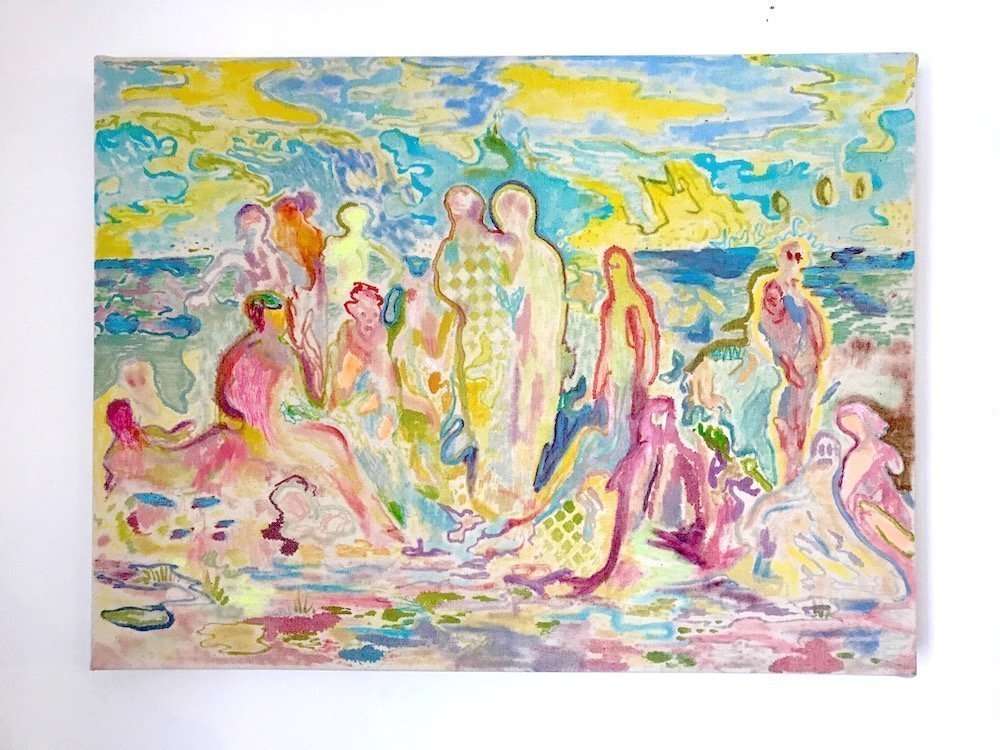 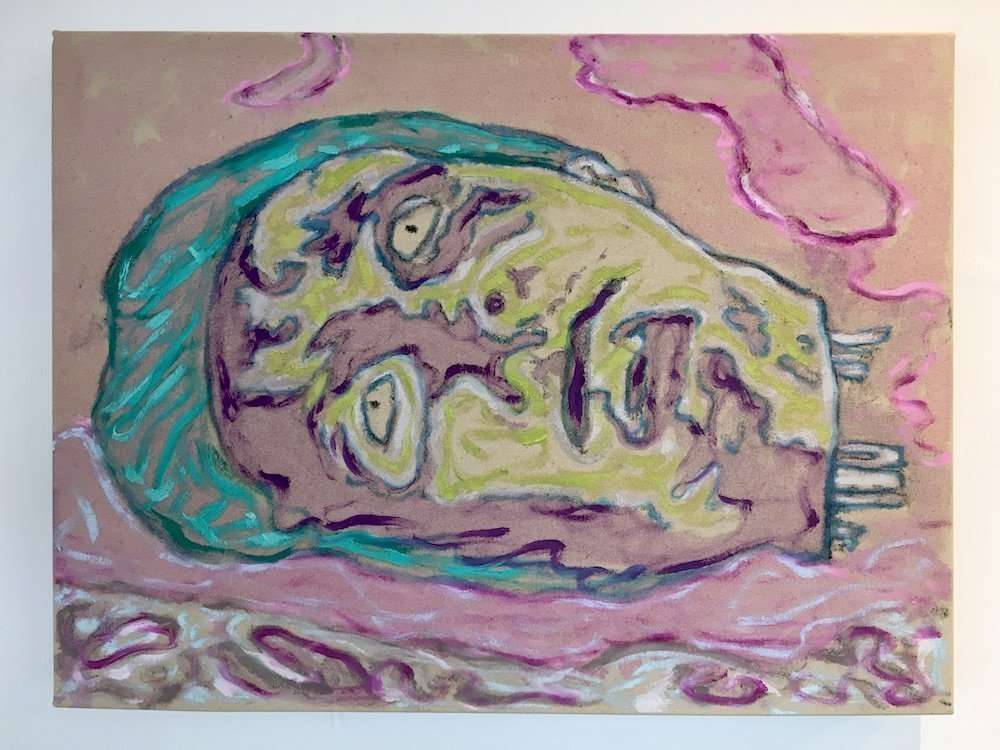 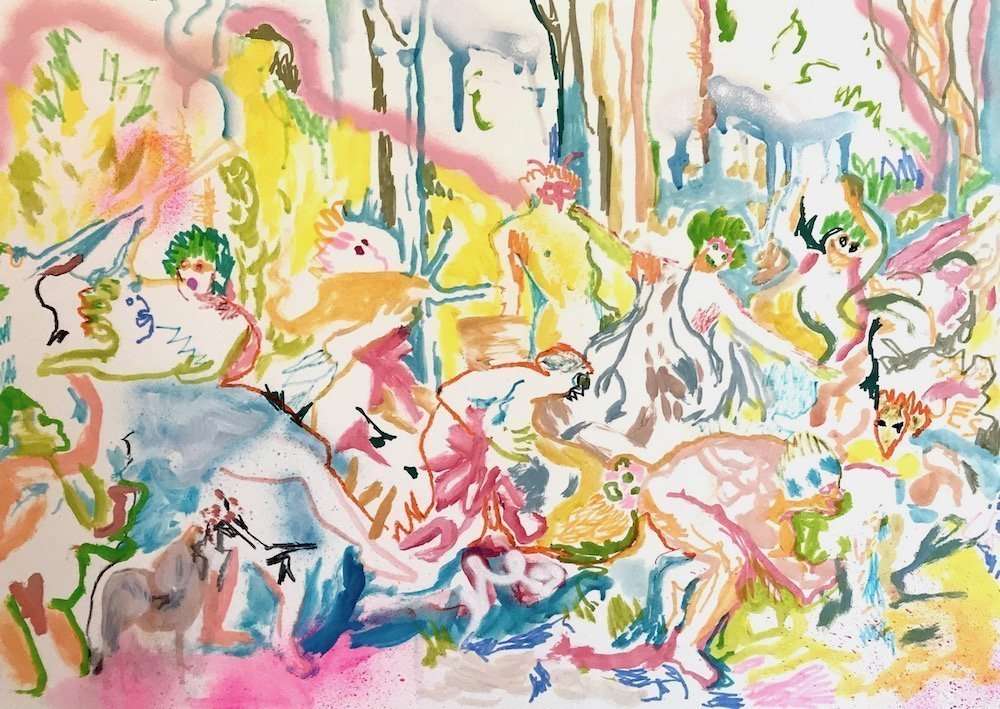 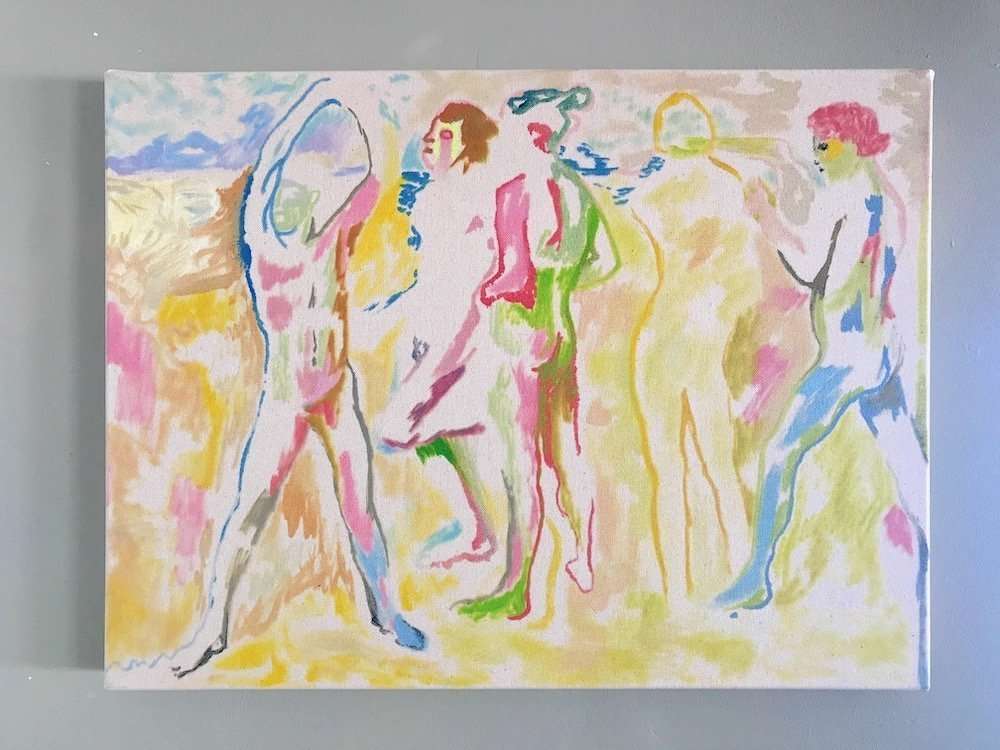 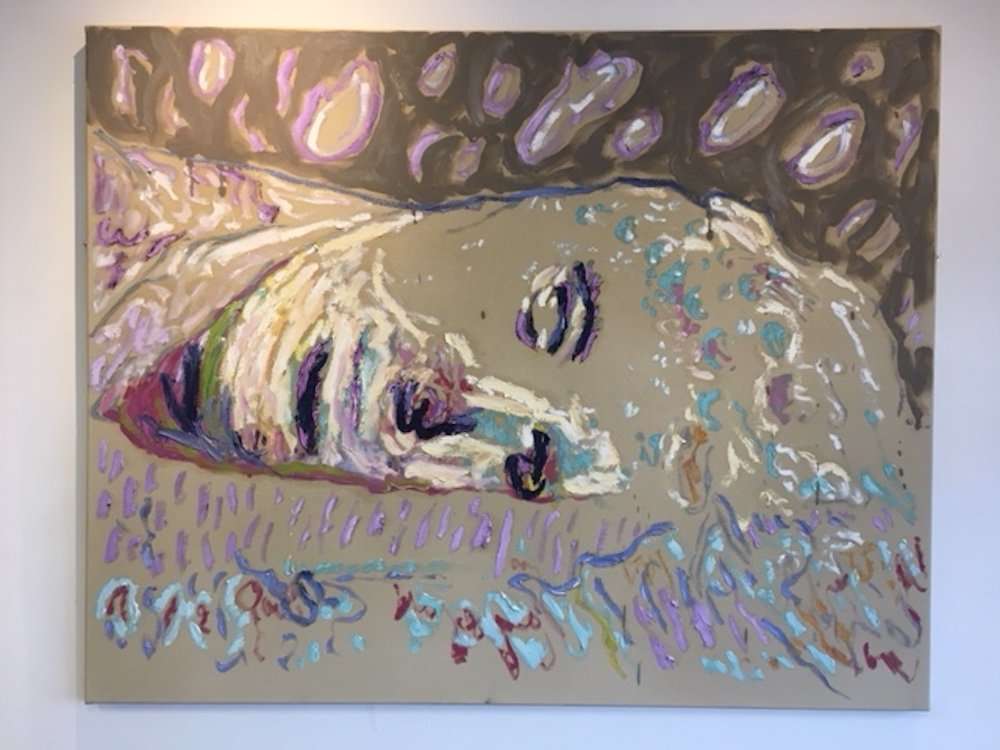 I left a career in banking at age 30 as it was completely unfulfilling, sold my house and travelled around India for 6 months which was amazing. I came home I began an art degree, then went on to MA, graduating in 2012. I had my first solo show at Rochester Art Gallery and began to exhibit in group shows with artists I met in Medway.

My current practice includes collaboration as a way of exploring new ideas and media. My own work is predominantly painting, although I tend to utilise different styles depending on the project, which is somewhat unusual. I am happy to say that the feeling of disconnection i felt in the bank is well and truly gone. I am now broke but very happy!

I found a book of Francis Bacon paintings as a young boy (a friend of the family worked at Tate and had given us the exhibition catalogue). I was instantly struck by how exciting and dangerous the work felt, and was instantly hooked. I also collected Hip-Hop Connection magazine when I was a kid and did copies of the amazing graffiti pieces that were on trains and around cities in the 80s.

I live and work in Kent, in the South-East of England. It is near enough to London that I can visit anytime and see all the great shows, while also being far enough away that my insular, introverted self isn’t overwhelmed, which I think I would be living in London. Kent also has a great mix of eclectic, grass roots and established arts organisations, and as London becomes increasingly expensive for artists, is seeing more and more infrastructure investment in developing the Kent art scene which is awesome.

I’m fascinated by states of consciousness, and have been investigating a correlation between the dichotomy of abstraction / figuration with that of subject / object. Over the last couple of years I have been using baroque paintings as a starting point as I am exploring ideas around excess and the altered states of consciousness associated with hedonism – this can be seen in my rave / remix painting series.

I have also developed a series which involves heads on their sides, which came from thinking about how Baselitz inverted his subjects in order to somewhat abstract them which I like very much. So I ended up having heads on their side as a way of looking at the subject as an object. The head that worked best for me was of Data from Star Trek as I found that as a character he occupied the middle ground between subject and object, or at least antagonised that relationship in interesting ways.

The heads on their sides has also more recently led into a series of paintings of sleeping women which explore ideas around depression, suicide and death. The paintings are a way for me of thinking about these difficult subjects but though subject matter that retains a sense of lightness and beauty so as not to become unpleasant to encounter. I guess they are a gentle meditation on mental health and mortality.

I work in series, so tend to work on 4 or 5 pieces at once, which might take several months to complete. I often reiterate certain subjects in order to capture the right balance of factors, either immediately or sometimes years later. I also feed on other art both contemporary and ancient as well as more mainstream cultural material, such as movies, graffiti, manga, cartoons etc. My research is ongoing and crosses multiple disciplines, but I tend to think through my work visually rather than purely conceptually.

Baroque paintings have been central to my work recently as they serve a dual purpose of being compositionally interesting as abstract arrangements, as well as being connected to ideas of excess and orgyastic ecstasy. I have been recalling my days as a raver in the early 90s and am interested in the altered states of consciousness connected with the scene as well as the acidic colours which I am using in my palette. I feel like there is a relationship between the slide into deeper and less grounded states of consciousness, and the slide from figuration into abstraction, and am interested in the connotations of this rhyming connection.

This isn’t exactly answering your question, but… my interest in states of consciousness was given a deep dive when shortly after I graduated I became seriously ill and was regularly blacking out; I had food poisoning and developed a heart arrhythmia which caused me to lose consciousness rather regularly. As horrific as this experience was, it gave me an even deeper interest in consciousness and how it relates to our inner and outer world-views.

In addition to my practice as an artist, I am also a curator. I co-founded the Medway Print Festival, with Allison Young and Sick!, with Zara Carpenter – which is an Arts Council funded project that explores invisible illness. I also teach drawing and painting 2 days a week.

I studied MA in Chatham’s Historic Dockyard, which is where I met Billy Childish, who became a mentor for me during that time and is still a close friend. He taught me many things, but one of his best pieces of advice was “stop trying to impress other people, then stop trying to impress yourself”, which I try to follow to keep me on the strait and narrow.

I resisted collaboration for the longest time, but have found it utterly liberating. It has allowed me to enjoy the creative process more, discover new ideas and ways of working, and actually the lack of singular ownership has allowed me to enjoy what we make in a way that is often difficult with my own work because of being so self-critical. So if you haven’t tried it, then give collaboration a go.

For a while after I graduated I felt the loss of the artists community that I had during my studies; other people to talk about art with, discussing ideas and how to best realise them in my work. Since then I have developed a small close-knit community of friends that are artists and curators who i work with and can talk about work with and it is invaluable to me.

I have a purpose built studio in my garden, insulated and double glazed so it is suitable for year round working, roomy enough that I can work on several large scale pieces at a time and with good natural light. I had a studio I rented but I tend to work in short bursts and on a whim, so it was better for me to build my own space at home; now I can work any time of day and whenever it suits me. I love it. It also has a cinema screen and sofa for chilling 🙂

I have an extensive library in my studio and if I’m not working I like to just read and flick through my art books to help stimulate ideas or pass the time. I also find drawing is a good way of getting things going if I am not quite ready to start painting. Painting takes a fair amount of energy, both physical and emotional, so drawing is a great way to get warmed up.

I didn’t have an art practice before art school, or rather I didn’t think of it as a practice. I made art but it was directionless and somewhat derivative. Art school allowed me to formulate my process so i could create continuity between my interests, ideas and output. That for me is when it became a practice as I think of the term. I was also introduced me to far more contemporary artists, which I am very grateful for.

I think the hardest part is the financial reality of being an artist. Having come from a well paid background working in banking, I feel the pinch even more keenly. I wouldn’t trade places for anything, and I know I made the right choice to change careers, but being an artist can be really difficult financially. I guess them’s the breaks…

I think there are probably two main domains of success, the first is creating good work, the second is recognition – and one doesn’t necessarily lead to the other. Recognition, whether by an audience or an institution has to be worked in its own right.

I think because of my temperament I will always be more interested in success in the first domain; I’m quite a loner so really my main focus is just how to make the best work possible. I do recognise however that I need to put effort into getting the work seen by a wider audience, and would like to have my work shown in established venues, that would be great.

I think embarking on collaboration in the last couple of years has been the most exciting thing I have done, it has really just opened everything up and made the possibilities for exploration feel endless, and as artists, exploring new territory is always what is most thrilling.

I have 6 artists that I regularly collaborate with – Daisy Parris, Darrell Hawkins, Adam Newton, Zara Carpenter, Wendy Daws, and my little nephew Miles (age 5), I also have a new collaboration hopefully starting soon with Sophie Wynn.

I recently completed a painting with Darrell Hawkins based on ‘The Swing’ by Honore Fragonard which was shown during Medway Open Studios Festival. I posted some drawings yesterday to Bulgaria which are showing as part of a group show at Art Gallery Rusi Karabiberov. And right now I am making a series of 100 drawings that are like abstract expressionist reworkings of 90s cartoons and graffiti.

I am a massive fan of Young Space and love everything you do. Keep up the good work Kate and let me know when you’re in charge of the Whitney or MOMA or whatever you end up doing! 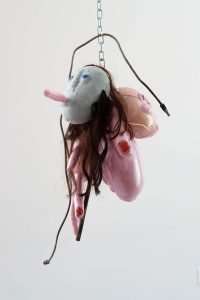 Aleksandra Liput
Can you tell me a little bit about you? I'm based in…