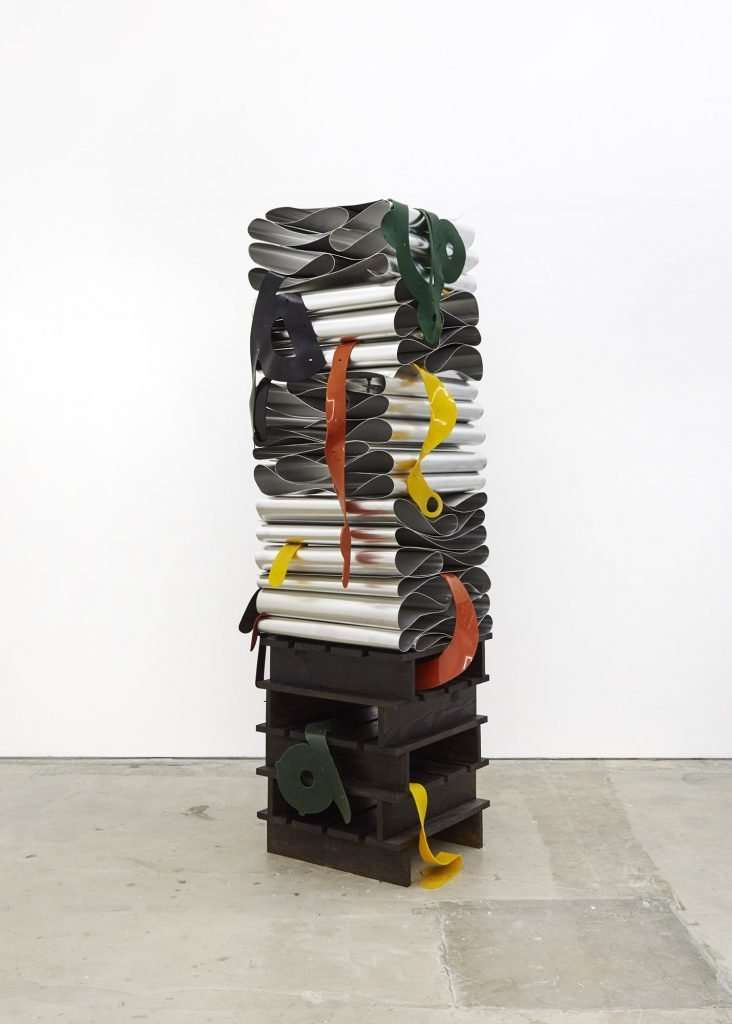 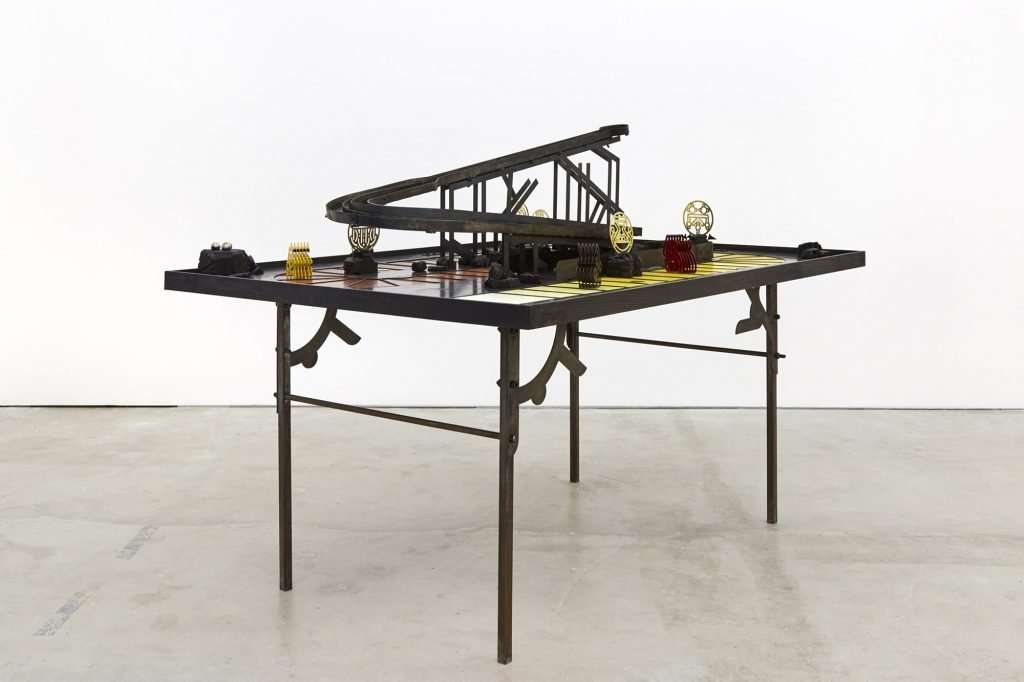 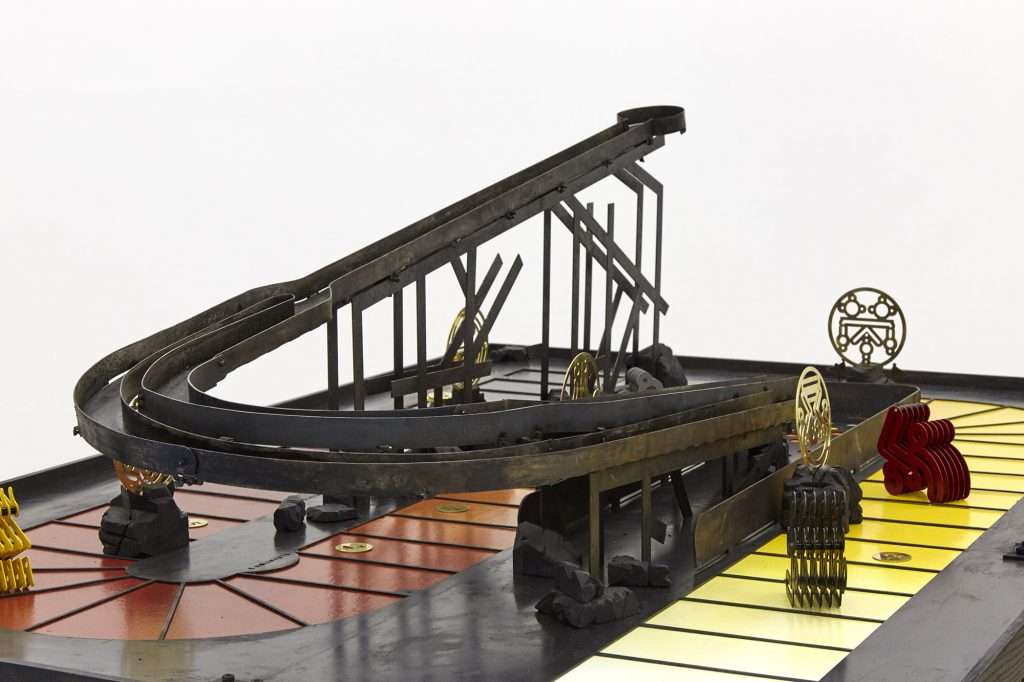 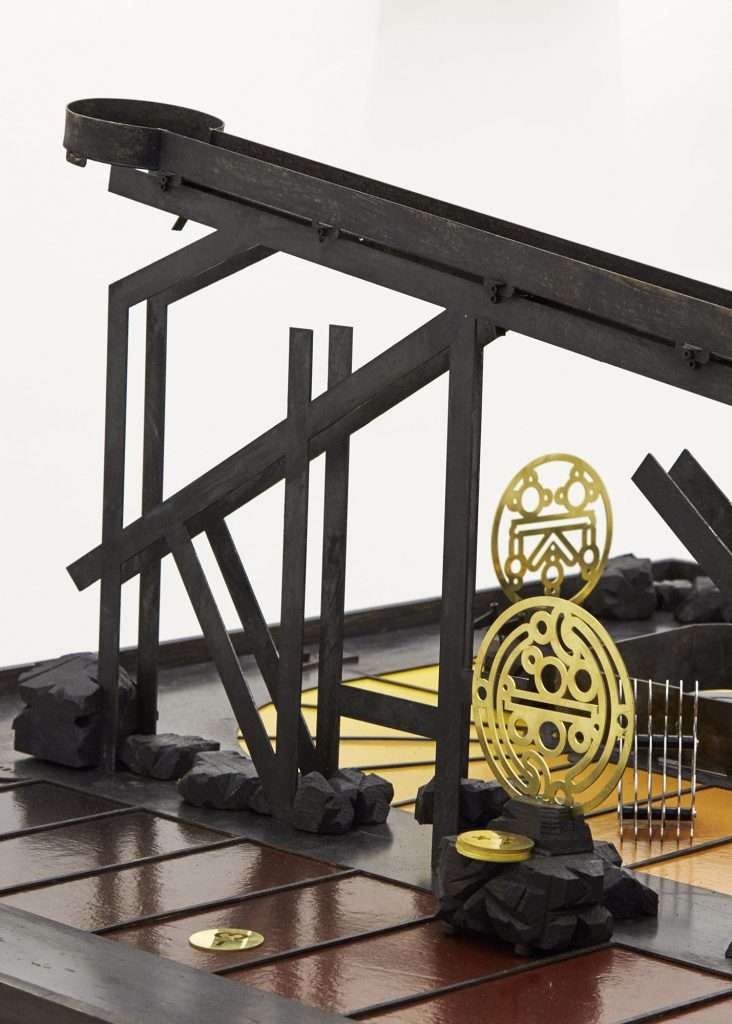 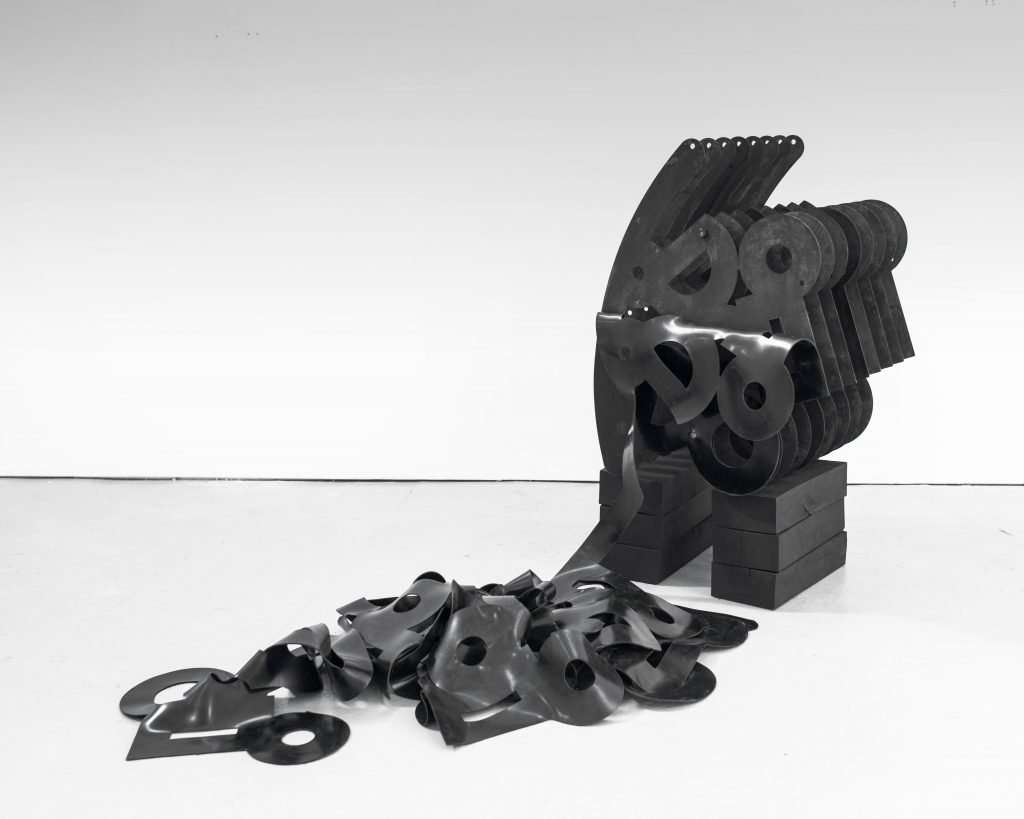 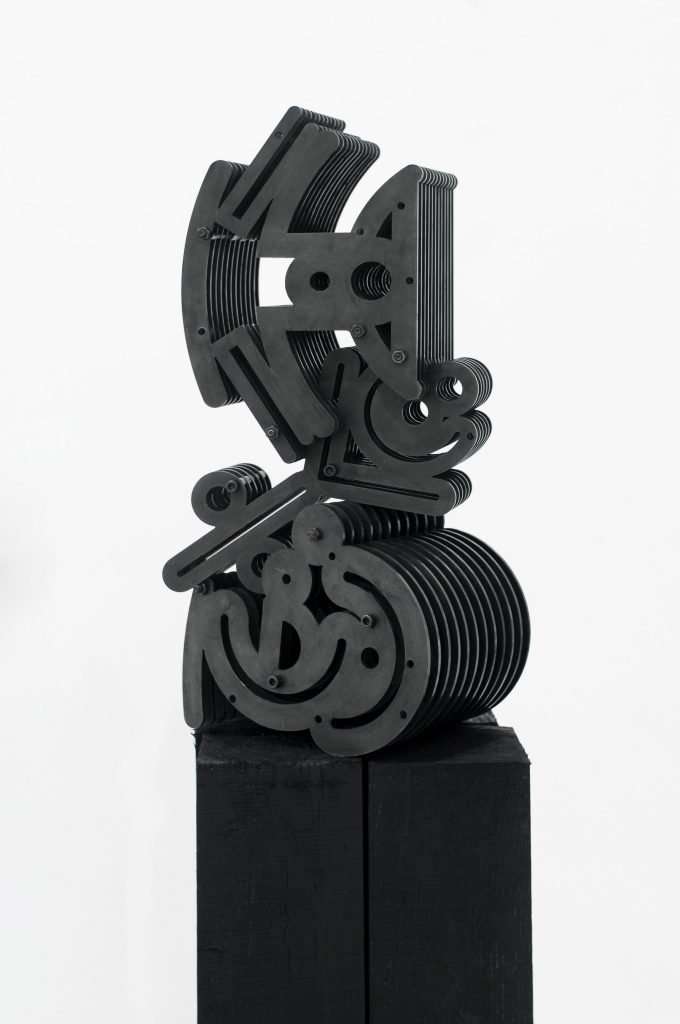 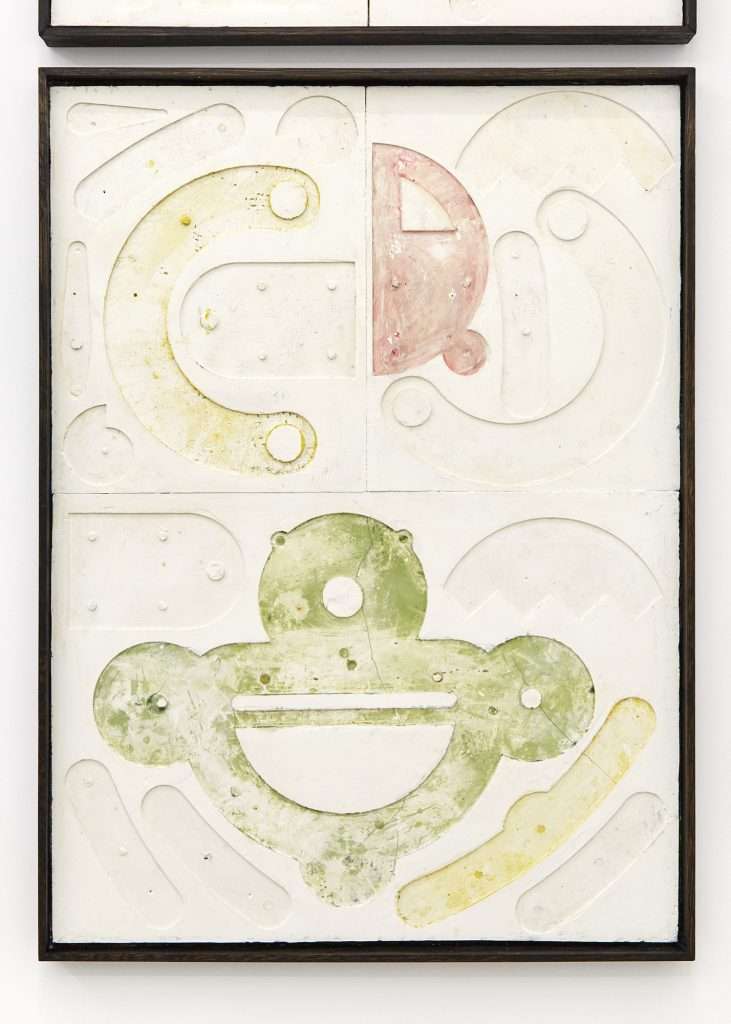 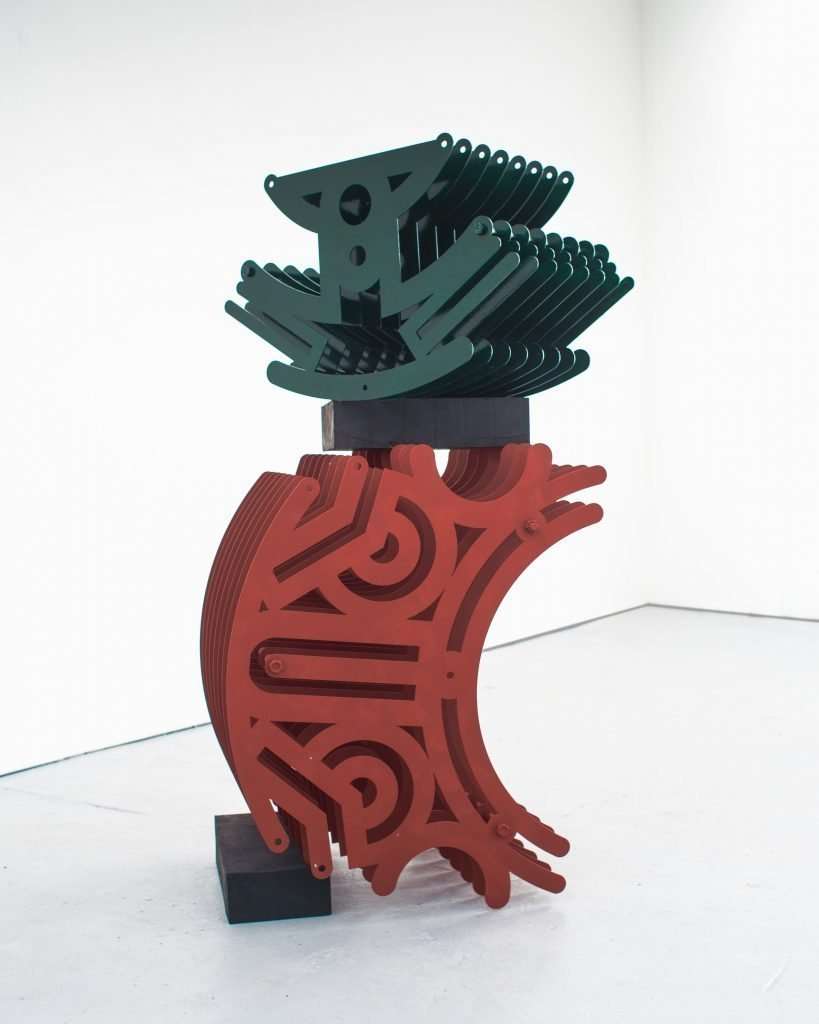 I’ve always been obsessed with making things – as a kid I was often nailing various bits of wood together in the garage and so throughout school it always seemed a bit of a foregone conclusion that I’d end up doing something art/design based. I think I ended up doing art as it felt far more open ended – no brief just the exploration of the ideas I find most interesting.

I came to London at 18, straight after school and 13 years later it’s very much home. The benefits are obvious, it’s such a massive city that has so much to offer culturally (although I never feel I take enough advance of that) and for the last 3 years I’ve been based at ‘the bomb factory’ in Archway, North London. It’s a communal mix of artists at all stages of their career and it’s wonderful to be immersed in that kind of environment

I’ve often talked about the way my practice has been focused on the idea of the ‘machine’ and this is true – much of the work clearly sits with that as a starting point, but in a lot of ways it’s what the ‘machine’ tells us about our own society, in particular the way we relate to work and labour, and how we find purpose and place value on the world around us.

Has your practice changed in the last months/years? If so, in what way? Why do you think that is?

I think it does quite naturally. I’ve become far more interested in the idea of sculpture being something more than a static object that you stand and look at. ‘Interaction’ can be a heinous word and probably makes most think of trying to avoid eye contact as a performance artists bellows haikus at you. But I’ve been playing a lot with the idea of gaming and competition and finding ways to pull a viewer directly into a sculptural landscape – be that digitally or through more physical processes.

My work is very studio based but also very computer based. I play with a lot of ideas using 3D software as I can explore shapes and structures in an immediate way. Then often some of these shapes are sent to be cut out of metal and so make a transition from the virtual to the real. From here I start bolting structures together and seeing how they sit when placed together.

Gaming and competition fascinate me, I think this this stems from looking at machines as objects created to make a job more efficient, and therefore to get the upper hand on someone else. Our society and economy are so deeply built on the concept of competition as a driving force that it’s become an inevitable part of my practice. It all gets a bit meta when as artists we can often feel pulled into the competition cycle as well. One way I’ve looked at this is through making actual board games that exists as sculptures in their own right. I’m hoping to pull this out a bit more and develop a series of ‘playground games’…

Depends who’s asking the question… a lot of my non art based friends would probably see my daily existence as an endless stream of confusing nonsense. I guess outwardly the strangest thing is when I do foley for my video work. Mainly involves me staring at a screen hitting chains on various things, blowing down tubes, chucking coins on the floor etc…

I do! And in fact often I feel I do it more than art – I work freelance as a graphic designer in the publishing I industry – books covers etc. It always call it ‘work work’ as it’s work, but not art work but it does mean I can always be in the studio and having a design element to my life can be enjoyable

No mentor as such – but II think of so many peers I studied with or artists who I’ve shown with have totally filled that role, sometimes just by what they do and me observing. It can be really easy to build fake hierarchies around the arts and often the most useful and influential, but people are some literally sitting right next to you.

Is there any advice that you’ve received in the past that you’re grateful you chose to ignore?

That I should try and a get a 9 to 5 job for stability reasons! And that I could make good money painting portraits of people’s pets. I mean the person (my mum) probably had a point but… no.

Yeah and it’s one that I find very hard to follow myself! But as an artist it can be hard not to compare yourself to others, in terms of practice success achievements etc. I think we all have such different practices that any comparison is futile – I’ve seen people tie themselves in knots doing that and as long as you’re exploring ideas and making things that still excite you then that should be the main focus.

It’s a massive thing and it’s something I only really realised after doing my MA. Artists, and those working in the arts often feel like they have to do a lot of justification for why we do what we do. Having a community let’s you explore ideas without any of that.

My studio is based in north London at a space called the bomb factory. It’s a slightly dual personality space as on the one had I need a clean computer area but then also it pretends to be a mechanics shop, full of bits of metal, grease chains all Looks far more butch than I really am. 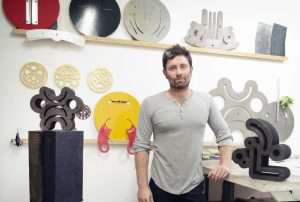 I religiously listen to podcasts when working. So much so that certain artworks remind me of certain subject matters that we’re playing when making. In fact I should probably just title sculptures based on the subject matter of the podcast I was listening. Other than that not much – I’m not really the type to spend hours on end in the studio, I think being able to rest and think is just as important as making.

I can’t really imagine being an artist without it. It’s not totally essential I’m sure but I’m my case the constant pushing of ideas and direct challenging has given me a great set of tools that allow me not to look at the obvious and explore the crux of ideas. I genuinely think everyone should have the experience of going through a crit, regardless if you work in ‘the creative sector’ or not – being challenged on your ideas is so valuable and is something many people don’t experience enough.

Finding the time to keep a practice going and to just live work and earn your keep; a particularly difficult challenge when in a city like London. It has so many wonderful opportunities but they also seem to come at an increasingly steep cost – I think that’s the same across the western world for artists, a lot of the time it feels very hard to go against the commodification of everything and allowing yourself to have space both physically and mentally to sit and make – without it needing to have so many implications.

Gah, tricky one. I’d be lying if I didn’t wish I could solely make a living from making art- but then of course there is a caveat there, if I were making money from art I wasn’t into then that wouldn’t fee much of a win (think pet portraits). Equally these days, unfortunately, that seems less and less of a reality for artists – particularly sculptors or those not working in 2D. I suppose if you can regularly make work and are able to show it to others then that is a pretty good achievement .

I’ve always been fascinated by public sculpture both the good and (more often) the bad. So making work for the public space has been a real thrill. After graduating I was approached to make work for Spitalfields market in London and now there are a couple of other projects that are soon to come to fruition, that’s been great. Also I work closely with a gallery in south London called Castor so showing regularly with them has been a real pleasure.

No… but I’m often milling over a whole load of projects things that I’d like to helm. I’ve recently made a semi transition to the countryside (Somerset) and there are so many interesting things going on down there that it feels like at some time over the next few years something might take shape… let’s see what happens eh?!

This year I’ve been involved with the Gilbert Bayes award at the Royal Society of Sculptors in which is a chance for earth career sculptors like myself to receive monthly mentorship which as been really rewarding and I’m about to start a series of prints which I’m looking forward to getting stuck into. 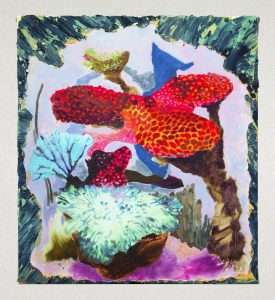 Michael Nauert
Can you tell me a little bit about you? I have three…