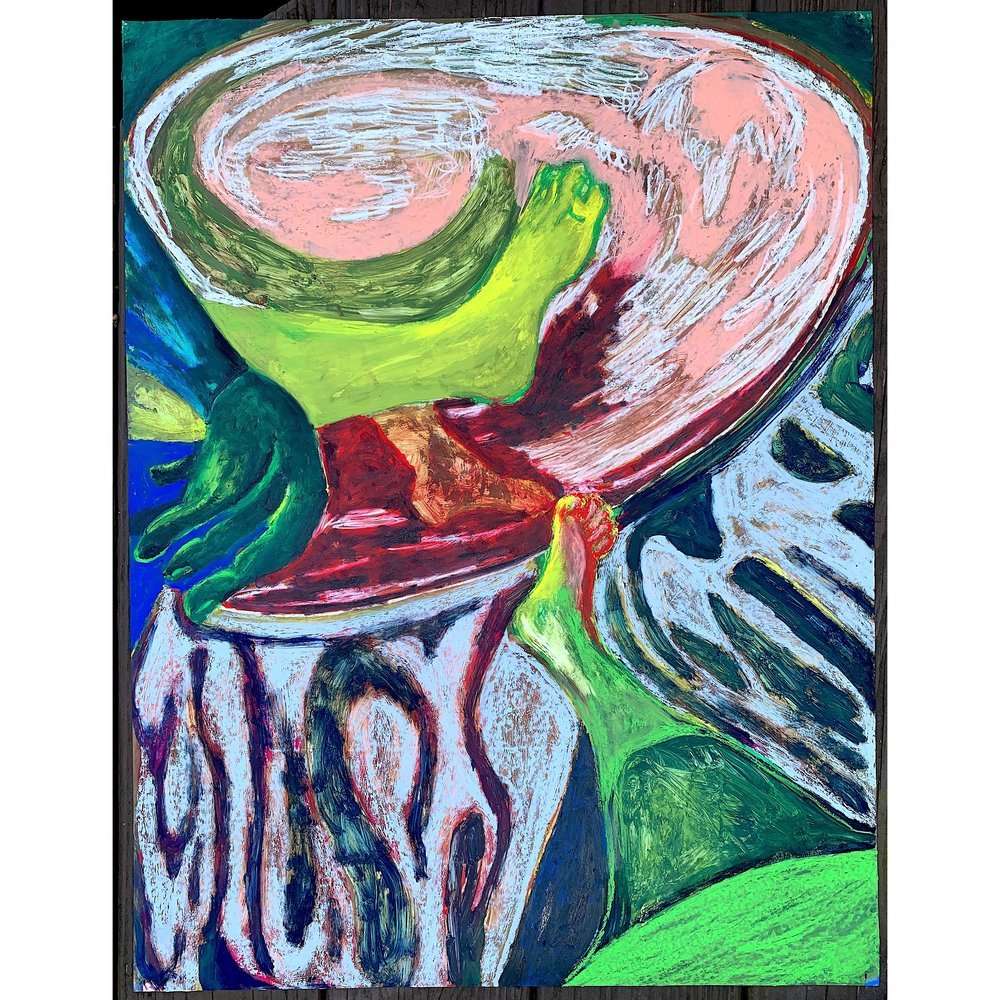 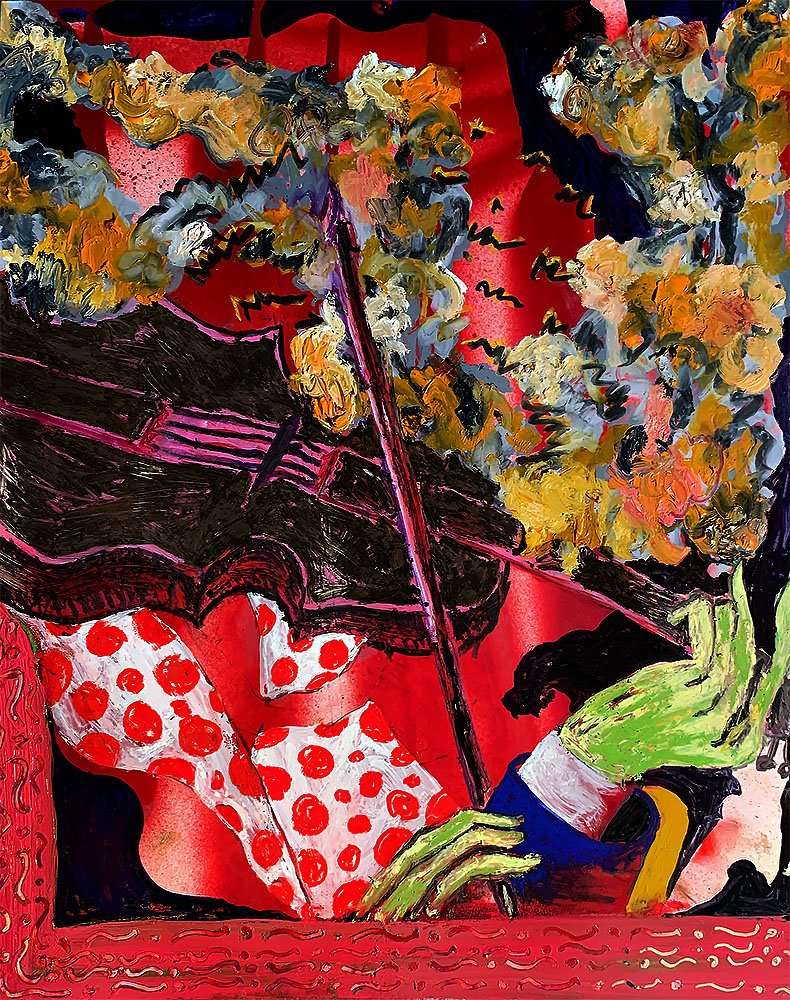 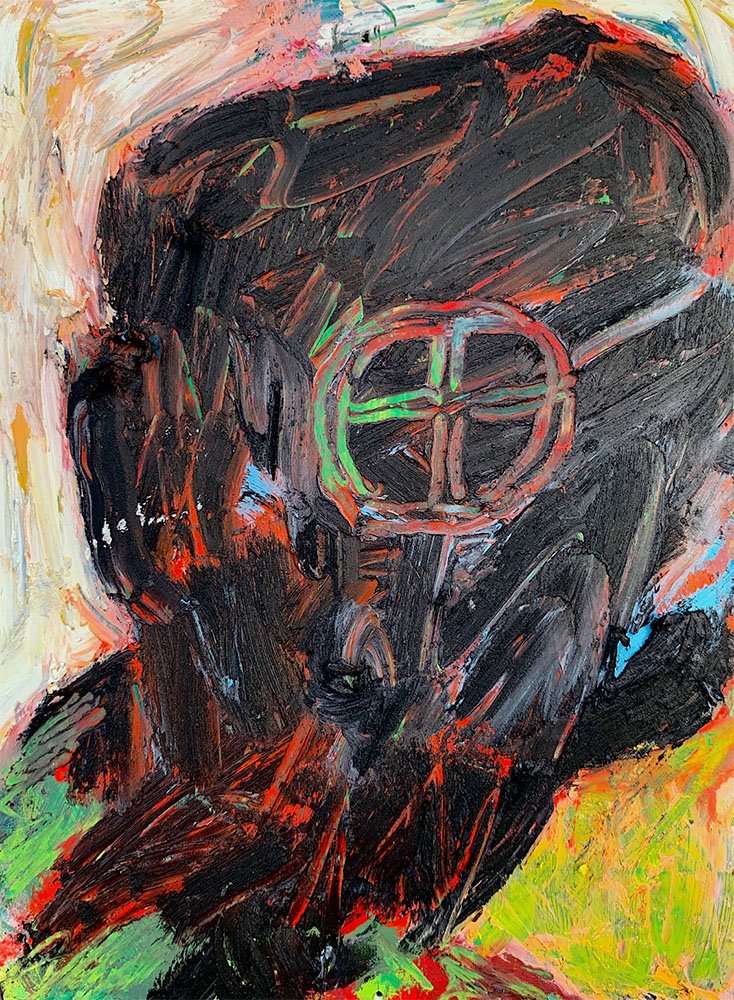 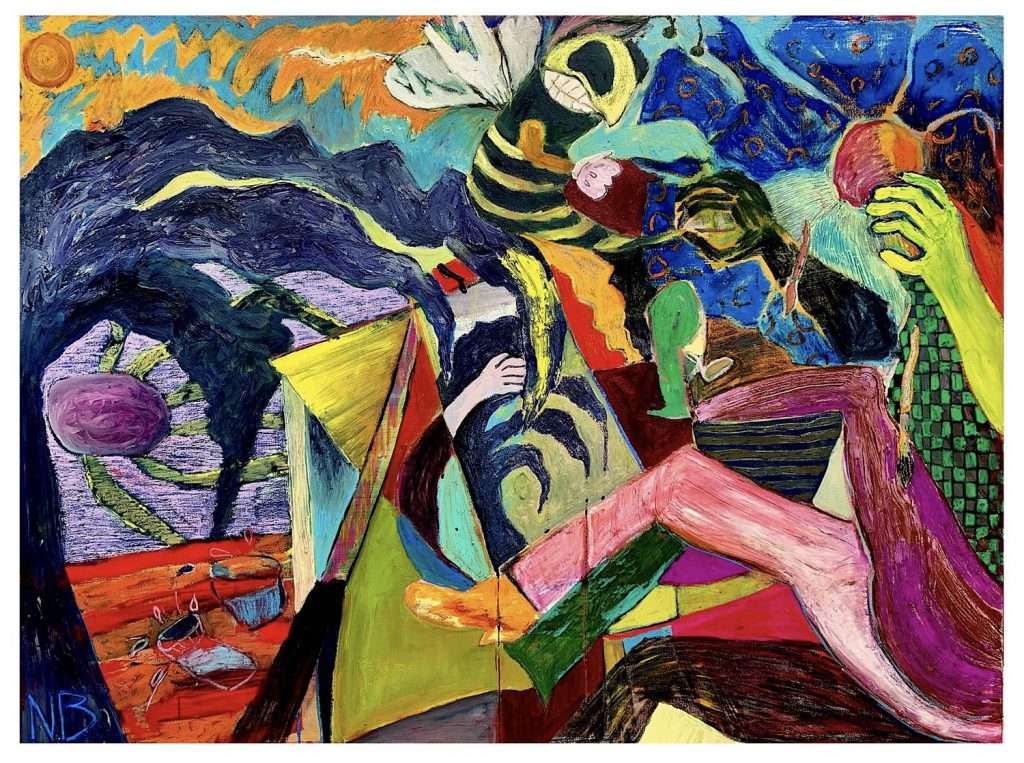 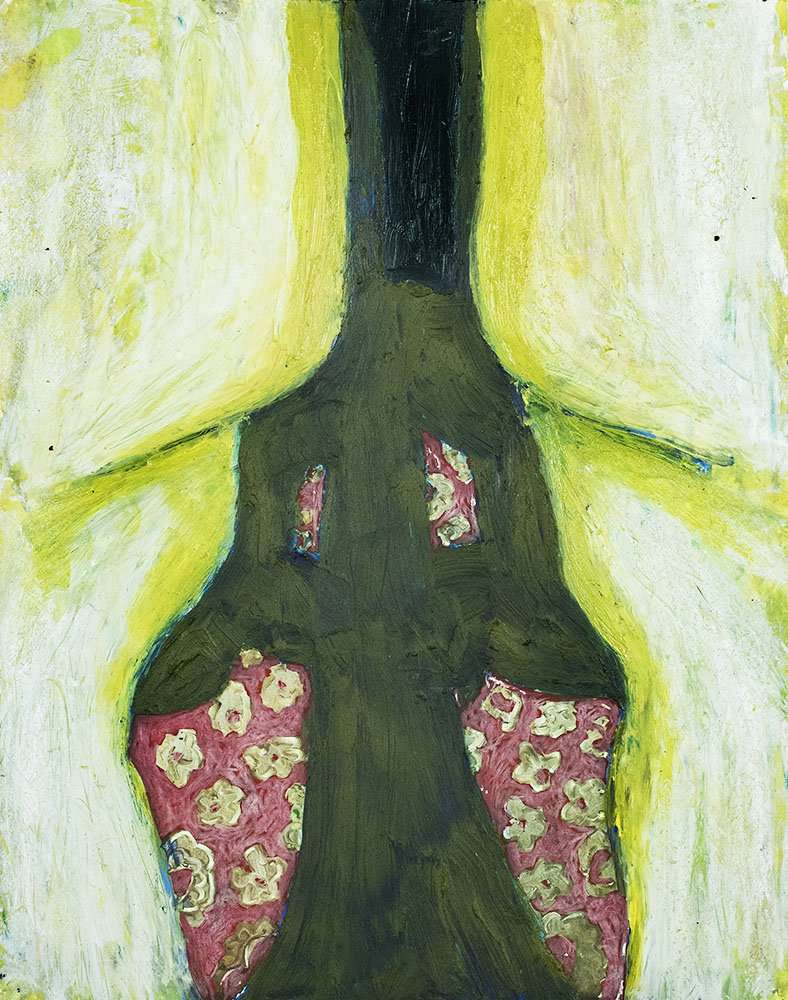 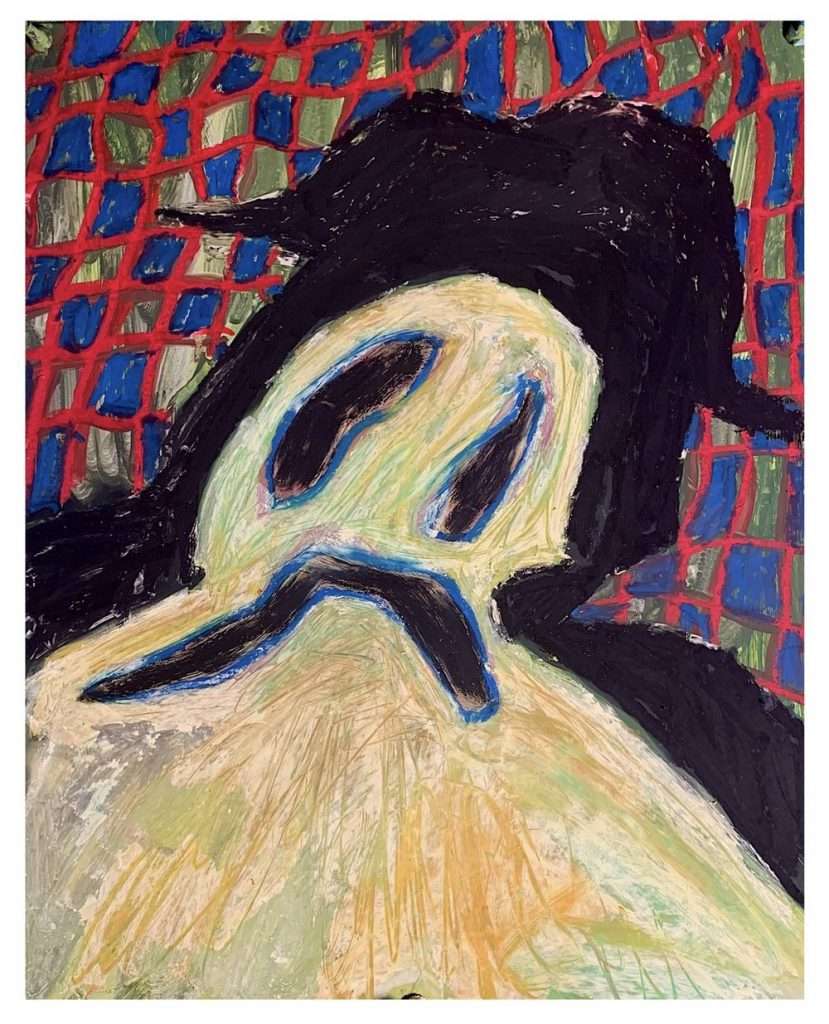 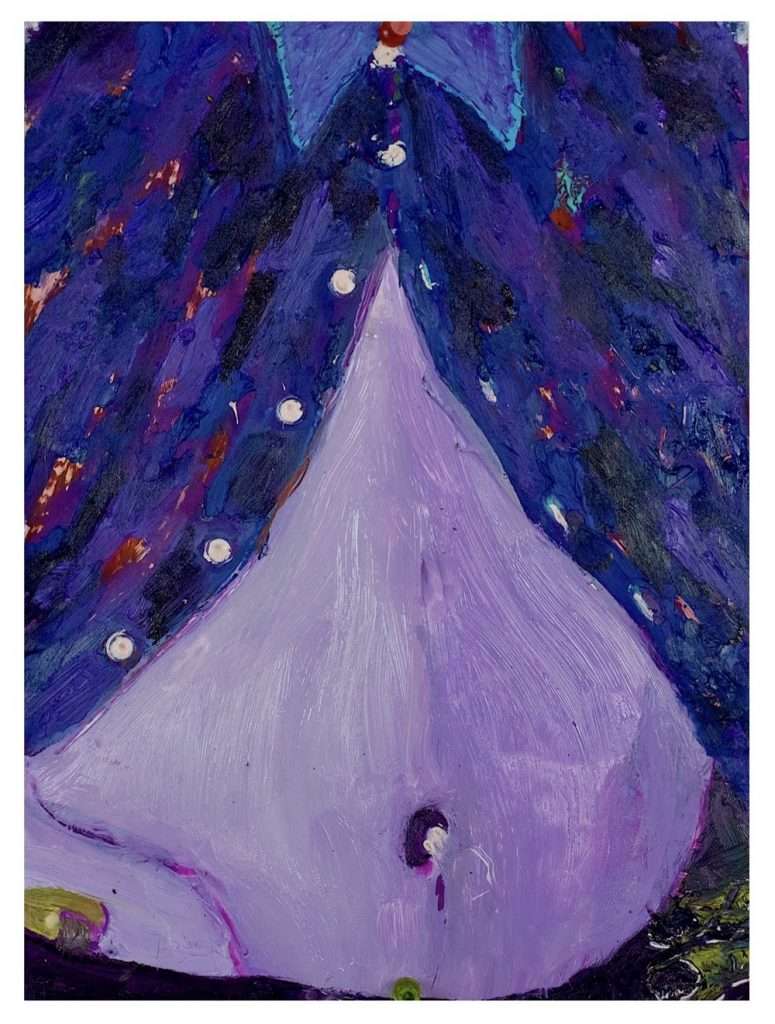 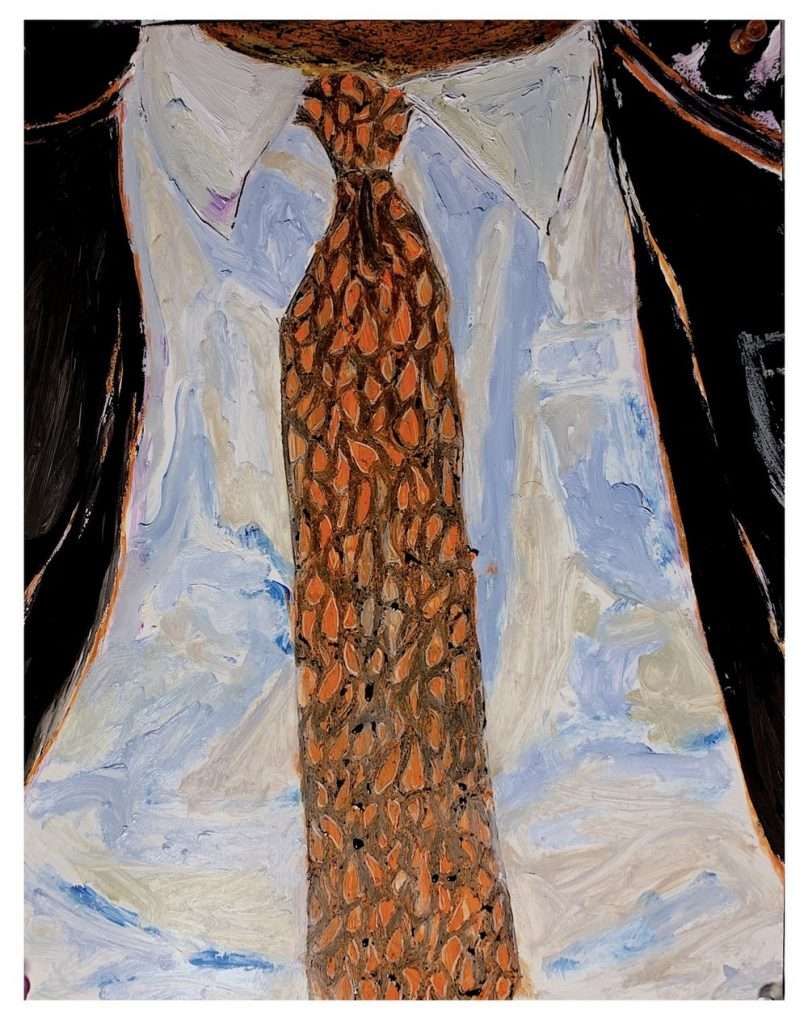 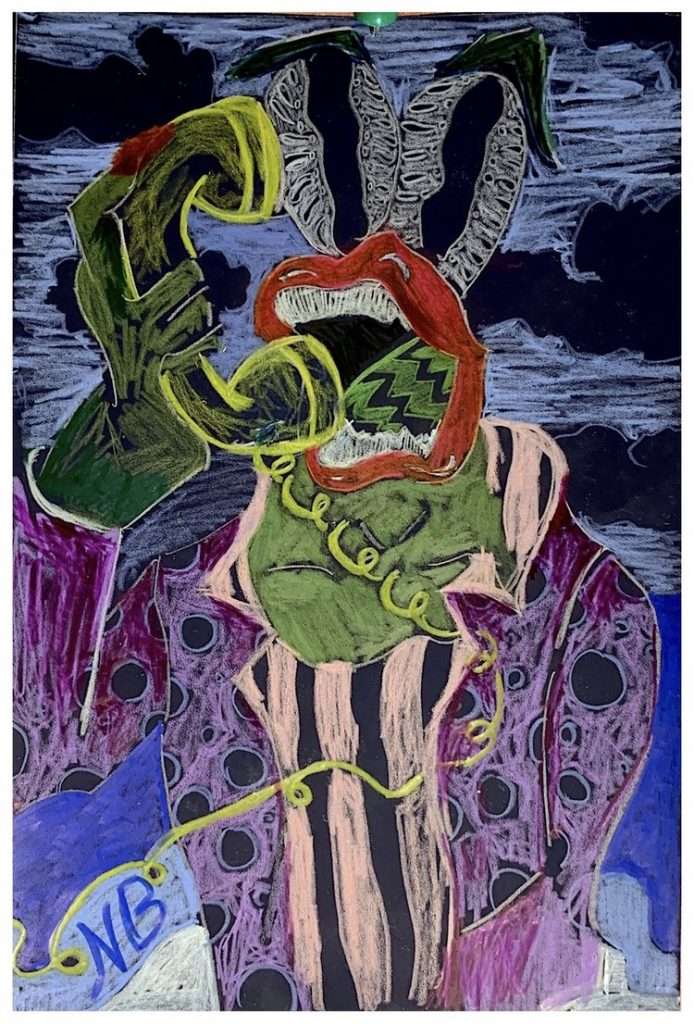 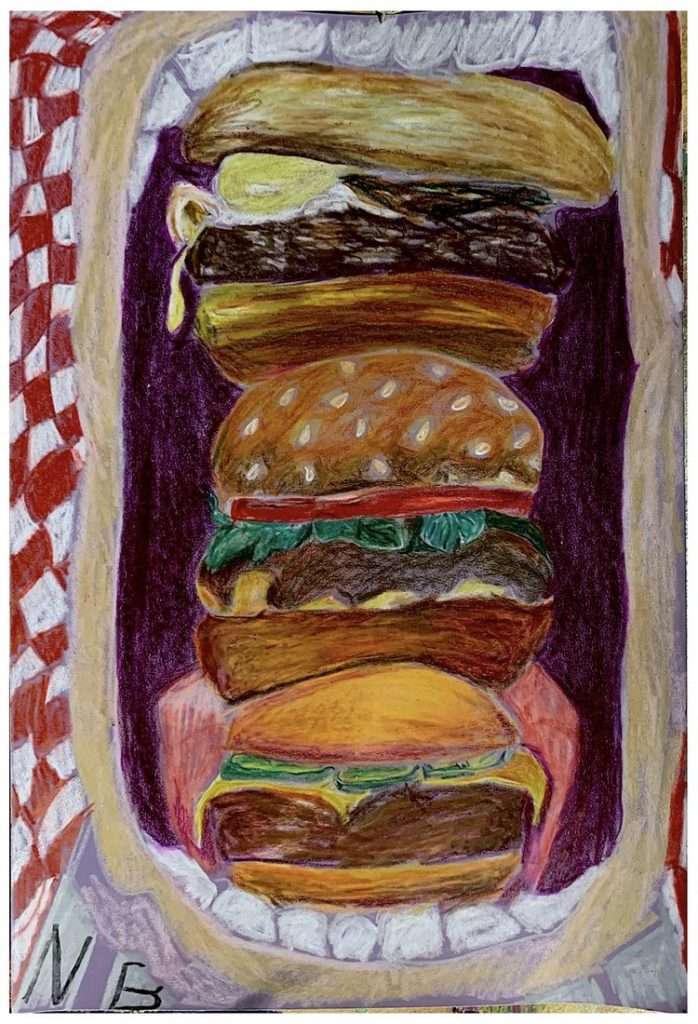 I have always lived outside of the Philadelphia area, about half an hour from the city. Where I am from is a bit more rural and traditional so I always have wanted to look outward for resources for my work and in what to gather inspiration from. My family has been involved in a newspaper delivery business for almost all of life, where I have assisted in it for about 20 years now. Because of this, and my dad being a bit of a hoarder, we always had tons of newspapers and magazines around the house. I used to make humorous collages that would create a new mood and story line for the piece once it was re-worked and fixed together. It was actually only until recent that I fully understood this idea of narrative and the absurdity of life as it has trickled into my paintings within the last few years.

I actually was interested in being an architect in high school. I was obsessed with Gothic cathedral structures and the futuristic rooftop gardens in Japanese contemporary building design but calculus was not something I was strong as so I fully pursued art in undergrad mixing graphic design and mixed media work together until officially transitioning fully into a fine art practice around my junior year. I still have a penchant for branding and typography and worked for a year or so for a web design company around West Chester where I attended university.

I tend to work on multiple concepts at the same time but most recently I have been exploring situations where the subjects of the work begin in a seemingly innocuous setting but are quickly overcome by a vastly changing environment causing a state of pandemonium within the space. I also have this unexplained series of portraits that come about at random times while I am working that include headless self portraits and faces that have been replaced by a scattering of marks or patterns alluding to a sense of internal unrest.

It’s weird. I can’t sketch or plan a work out in a smaller version because I tend to lose interest by the time I go from the study to the final piece. I write a lot. Sometimes goofy poems, or stream of consciousness narratives about my life or about imaginary situations that feel embarrassing or anxious. This part of my process is always ongoing because I constantly am jotting down random words that end up sparking a new narrative to build from or a new title for a painting. Using word association as a beginning stage for the work creates a freedom to creative a story line that reacts to word or phrase as it pertains to my mood and what I am encountering around me.

My work always has been very heavily influenced by ideas of anxiety, sexuality, and embarrassment and most recently I have been evaluating these themes by using equivocation. By flipping a recognizable action like plein air painting into a chaotic agitation of shifting color and repetition of the figure, I want to re-purpose ideas from how we normally see them to create a new narrative that feels like an overload of recognizable shapes and images that create a chaos within the composition

I remember I made a very weird painting back in 2016 where I made a condom into a butterfly net. It was awful, but in a strange way it was a turning point for me in making double meanings out of objects that I was incorporating or painting.

I also had a painting around the same time that was for a show called, The Vault, where I drenched a large canvas in vodka and drew on top of it.

I feel like most out there have some time of side gig to make ends meet so I actually sell pet insurance on the side to have more of a steady paycheck. It couldn’t be more different from what I am doing in my art practice but I prefer it that way becomes it gives me a break from over complicating what I am working on in the studio by constantly obsessing over it.

I think it definitely is nice to have something else to release you from your studio time because I know I can get so caught up in things when I’m grooving with a painting that I will forget to step away.

In an art sense its about sharing conversation with like-minded people that want some of the same things you do and that are focused on what those goals are.

In simplicity, community equals support. Having those around you who advocate for what you do even when you don’t always know what that is.

My studio is one of those things where no one else really understands how I can find anything, but oddly I always know. I’m always such a mess and can be fickle about where I want to paint. Sometimes I like sprawling out on the floor, and other times I work standing. Either way, nothing in the space is off limits to become either an element to the work or a utensil for application (screwdrivers and combs become markmakers and paper plates and cutting mats become palettes, etc.)

Music directly correlates and influences my studio life. It’s nearly impossible to paint without music on or at all or at least faintly heard in the background. The music really lends to my mood and keeps me loose. Plus, it can enhance the narrative that I want to depict in the work as I get wrapped up in the lyrics. Normally one can tell what Spotify playlist I had on by the outcome of the painting.

In my own work, knowing when a painting is finished before I jump the shark as well as staying true to the work I am making and what I am trying to say with it.

To have the ability to create work as much as possible and to be able to connect with like-minded people who continue to challenge and advocate each other and to feel satisfied by the work that I am making.

Only that I am a huge fan of Young Space and platform and all that you do. Thanks! 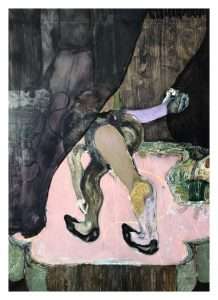 Guglielmo Castelli
Can you tell me a little bit about you? I was born…