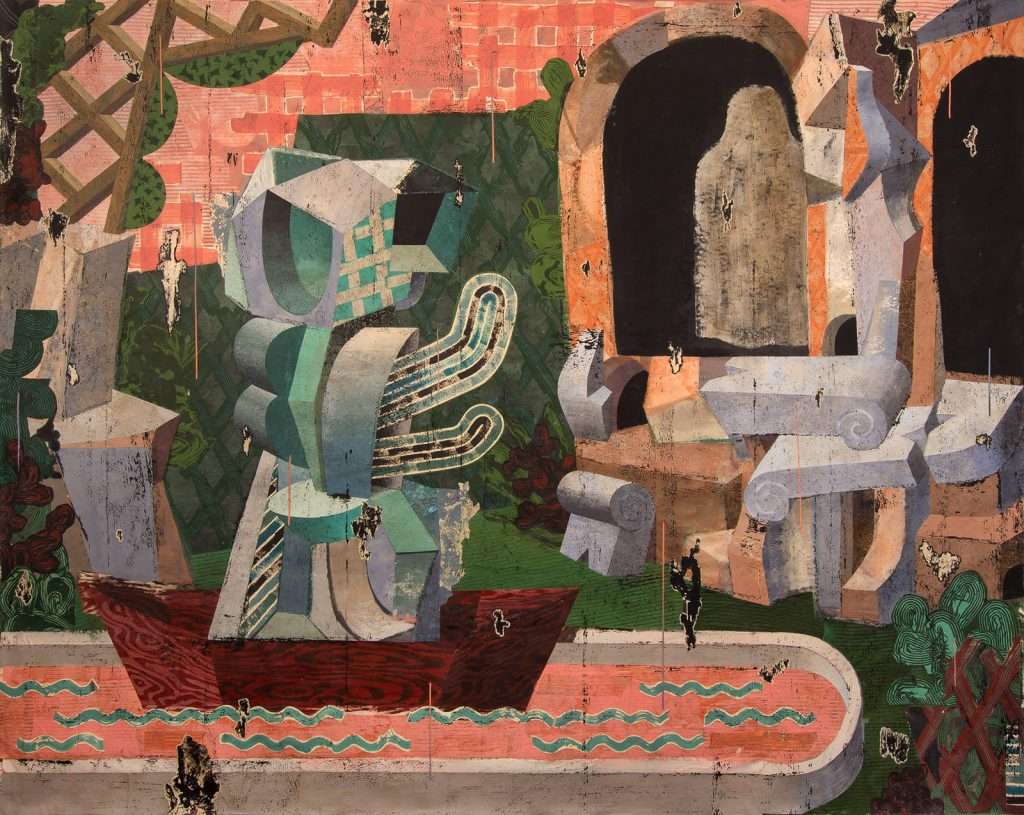 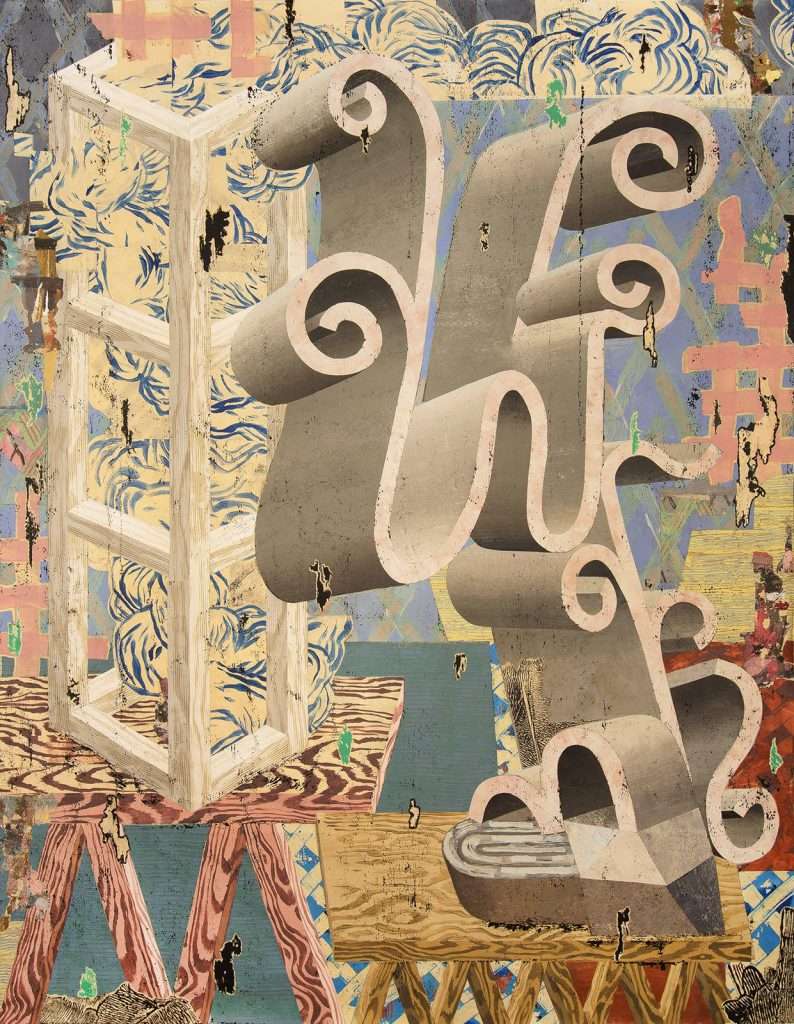 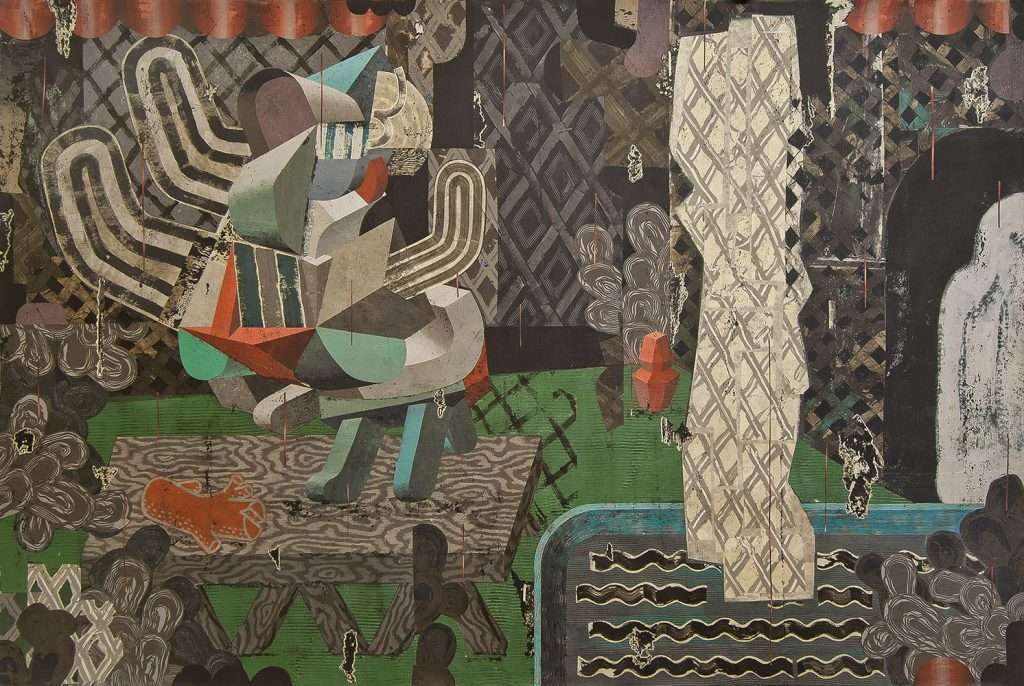 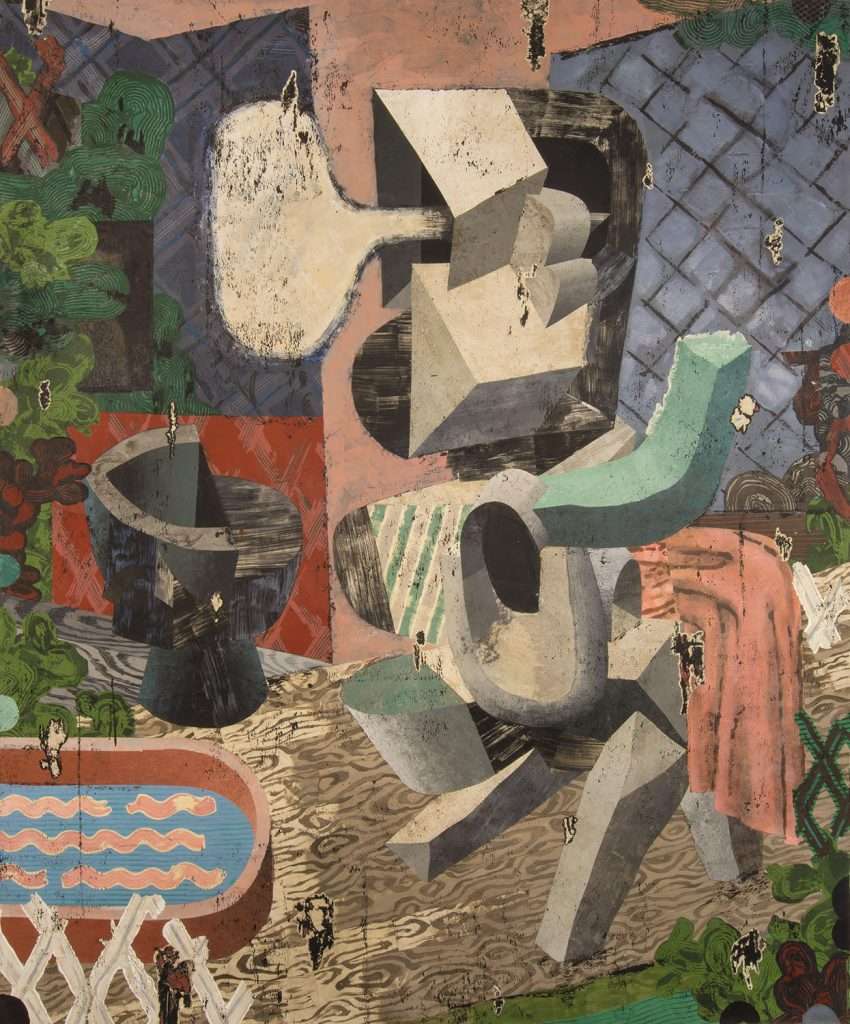 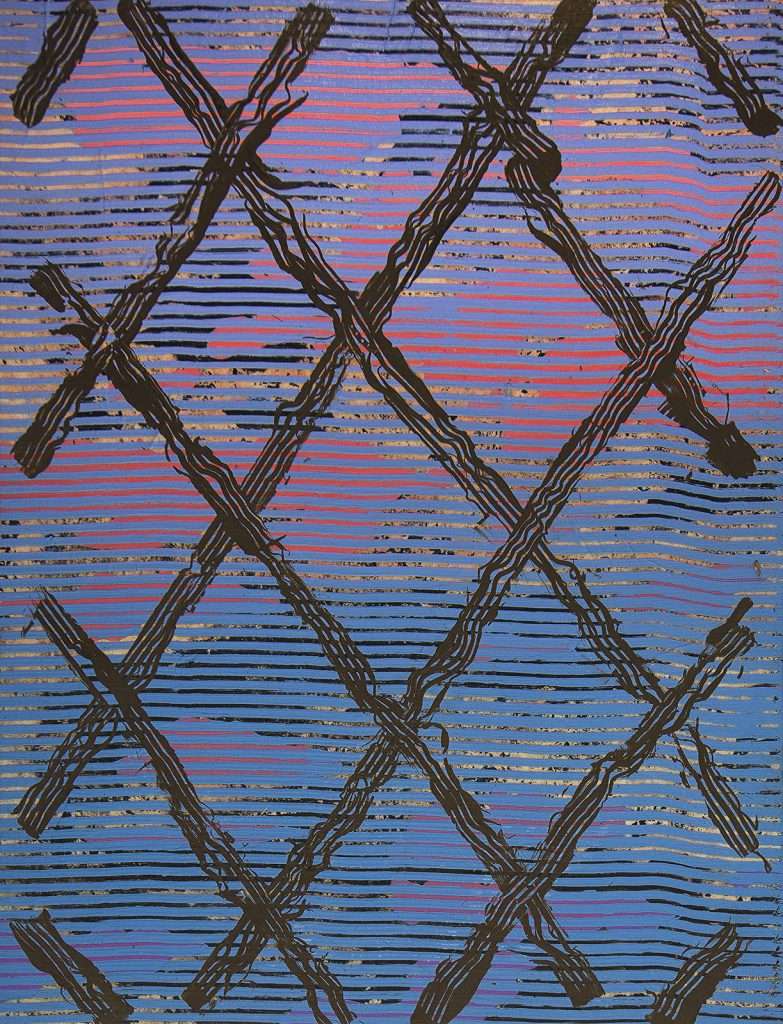 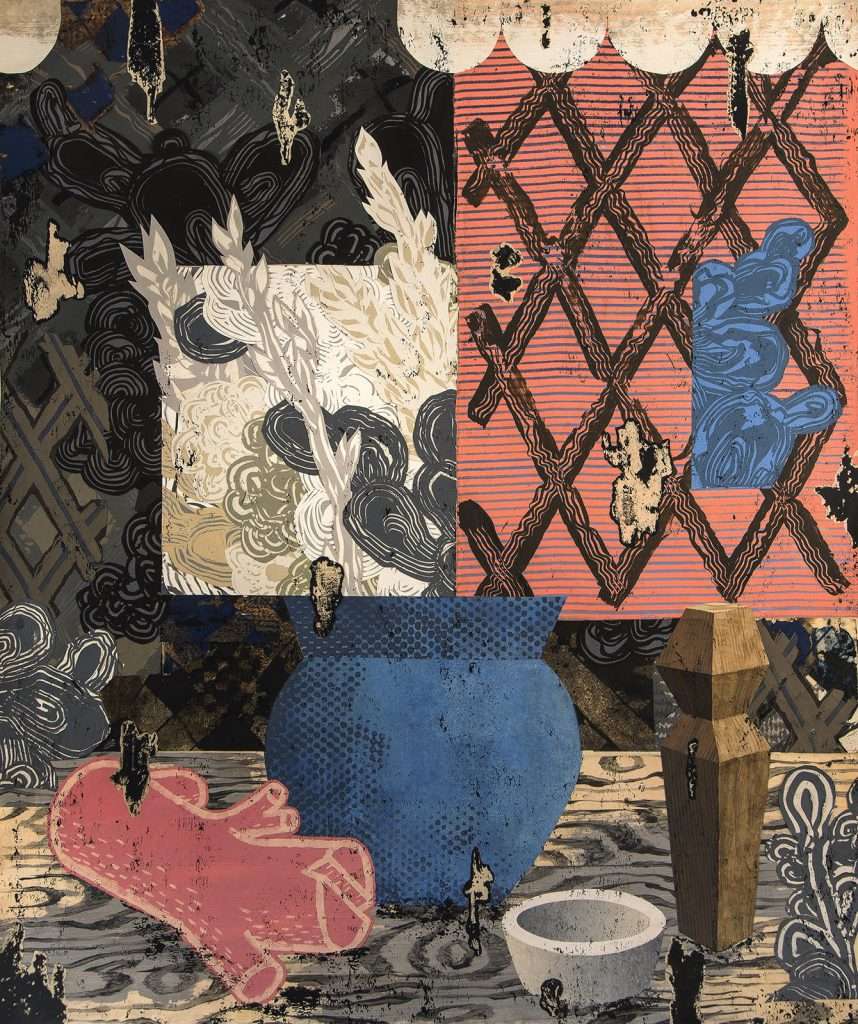 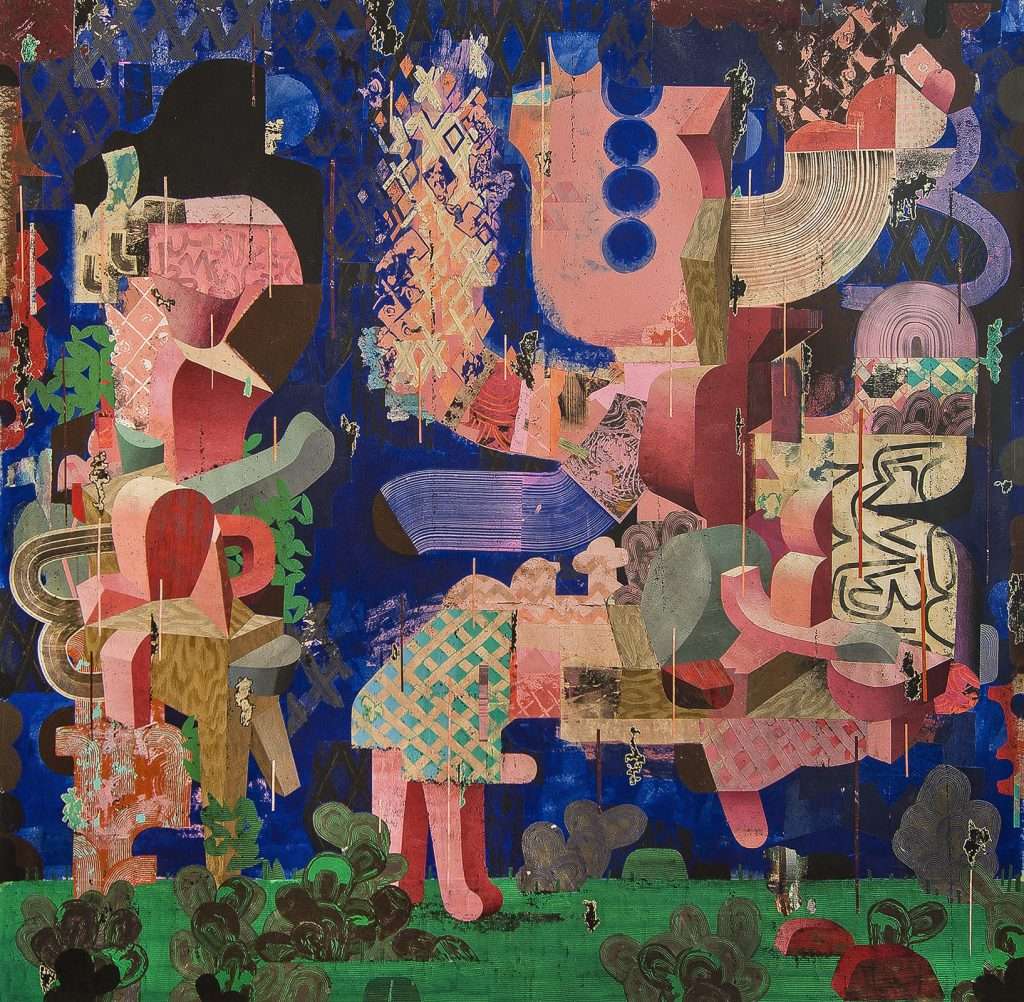 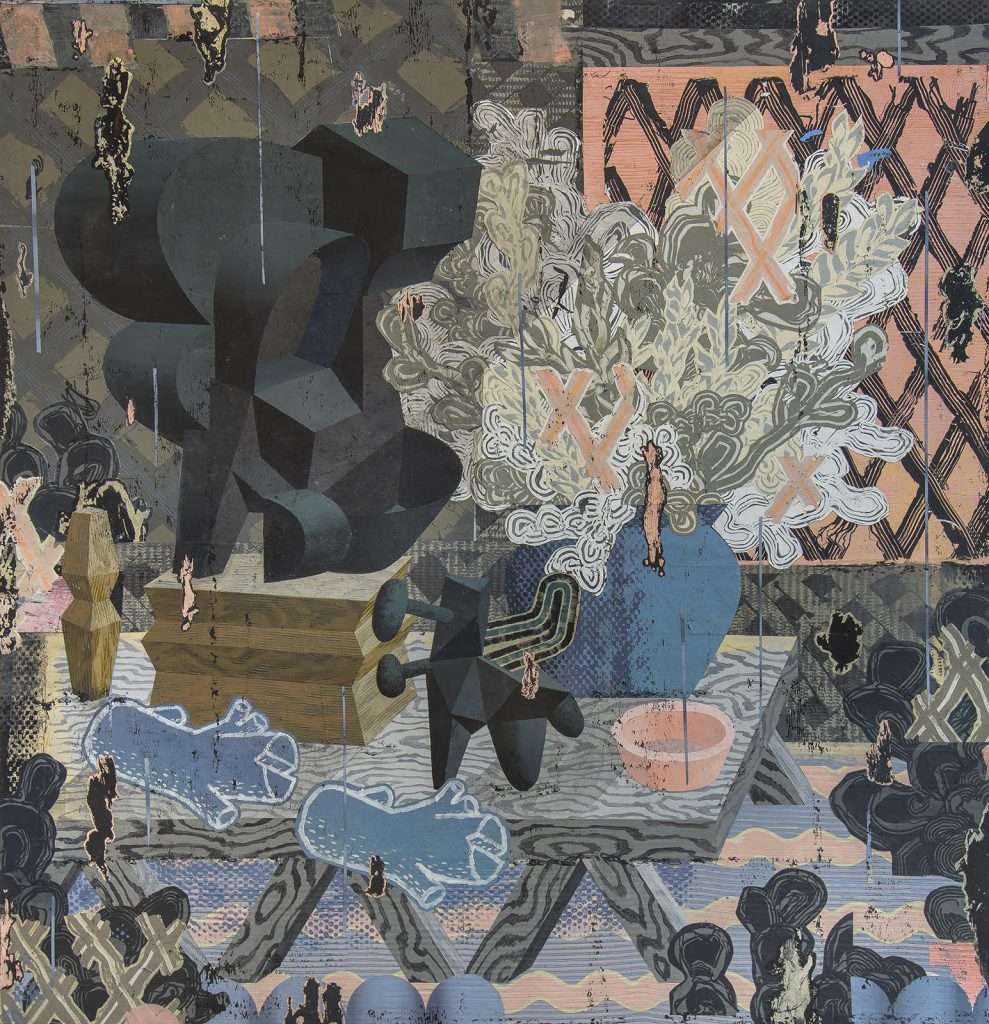 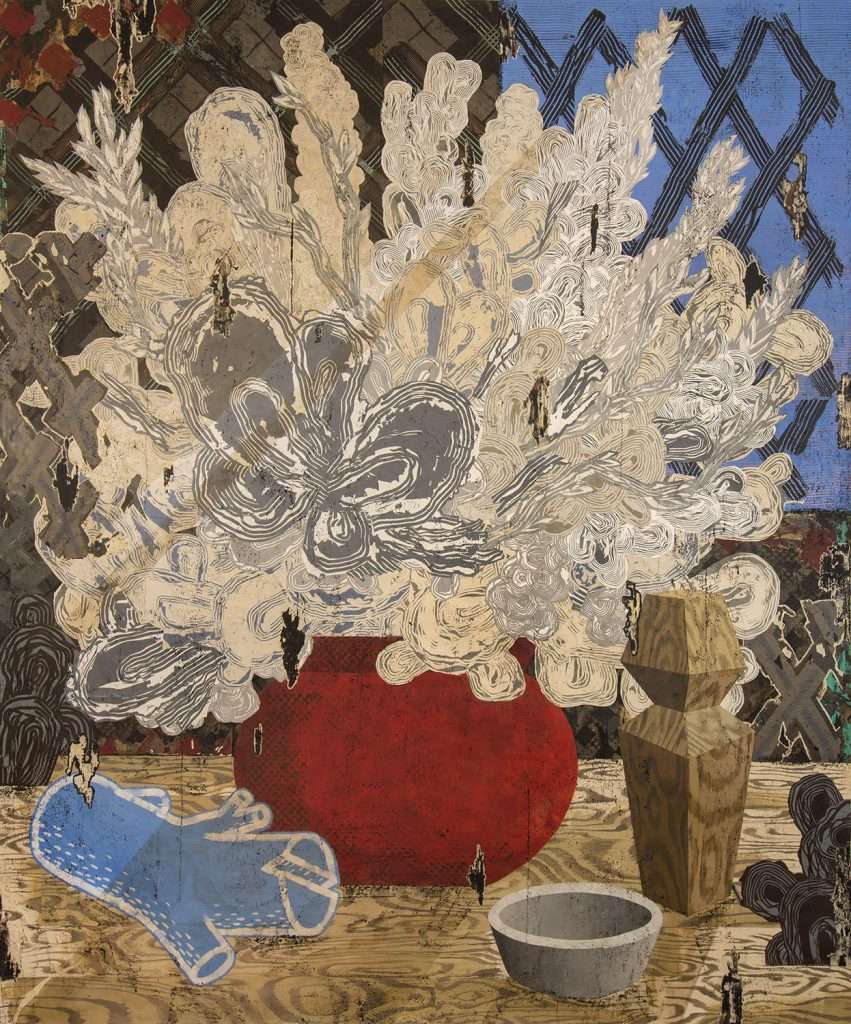 I was born in Des Moines Iowa, moving to Minneapolis to attend the Minneapolis College of Art and Design where are my main focus was sculpture and site-specific work. Shortly after receiving my BFA I was seduced by that demon Rock and Roll and pretty much spent the next 20 years playing music in clubs around the region. It wasn’t until I moved to Seattle in 2009 that I established anything like a dedicated studio practice and began exhibiting publicly. Sometimes I kick myself looking back at all that lost studio time but I know that I wouldn’t be making the work I do today without the janky circuitous path that brought me here.

Like most artists I started mark making at a very young age. I was fortunate in that my parents were quite supportive of my interests. When I was young they enrolled me in classes in painting, drawing an animation at the Des Moines Art Center (a true gem of a museum should you ever find yourself stranded it in the middle of Trump country). I was also very active in theater throughout my youth and into high school, which is something that has come back to inform my work in ways unexpected.

Seattle has been incredibly impactful on my work and practice. The arts community here is wonderfully supportive. I feel like there’s a bit of an outpost mentality out here, we’re all invested in each other’s endeavors and success. I also can’t begin to overstate the importance of the specific geography of this place. In a city nestled between the mountains and the ocean, the language of our environs seep into many local artist’s vernacular, myself included. It’s a shared touchstone that transcends our stylistic differences.

For the past several years the work has continually brought me back to questions about identity and memory and the rather cyclical, almost ouroboros-like relationship between the two. I feel that identity filters memory while memory becomes the construct through which identity is forged, in other words, it’s all kinds of fucked up. Our understanding of ourselves and our relationship with the world around us is completely suspect because of all the internal widow dressing. I think this leads to all sorts of absurd human behaviors as a result of coping with this inherent uncertainty. Theater and still-life have become useful lenses through which I project these ideas.

Process is very important to the content of my work. Nearly every question I consider is a direct result of the methods I utilize in the studio. My paintings are constructed from hundreds pieces of cut paper which I paint using various methods prior to being affixed to the piece. Most of what you see is not painted directly on the surface. In fact, most of what you see isn’t even painted directly on the paper I use, it’s actually painted on glass, allowed to dry, and then transferred to the paper which is cut into the elements that make up a given piece. There is an inherent degradation of the artist’s hand and loss of information in this process that I value. It also provides a certain level of remove that informs the ideas of projection and facade I’ve been exploring in the work. There is a lot of applying and squeegeeing away, brayering and other manipulations that occur. Most elements go through three to four unique treatments before finding their way into a composition. It’s fairly time-consuming, but that provides an opportunity to consider questions that a more direct approach may find me rushing past.

Lately I’ve been thinking about projection and façade, particularly the friction that occurs between these veneers and the actuality of things. What’s really interesting is how this schism scales from questions of psychology all the way to branches of theoretical physics (two subjects I can only pretend to know anything about, speaking of facade). In the end, I guess it can be distilled down to the rather mundane question of reality versus perception, but the way that similar mechanics are in play whether this occurs on a deeply personal level or when wrestling with more fundamental questions of existence is what I find fascinating.

Making art as strange enough. Asking people to pay attention to what you do might be the height of absurdity, but thank god we do it.

Up until last summer I supplemented my income by painting houses. To be completely honest, for several years at the beginning, art sales were supplementing my house-painting income and not the other way around. The biggest upside was when people asked me what I did for a living I could always answer “I’m a painter” and leave it at that. For the past few years I’ve been very fortunate and I’ve been able to step away from the day job. Of course, there’s no guarantees and who knows what next year will bring. I think it’s also very important to acknowledge the support of my partner Bridget. We could never get by on her income alone but it’d be disingenuous not to credit the impact that sharing expenses has on my increased studio time and our general quality of life. And let’s not forget the health insurance her job provides for us. Without that I’d be screwed seven ways from Sunday. I think working artists should be better about publicly embracing the importance of their partner’s support on their studio practice, financial and otherwise. Let’s face it, there’s very few of us out there who are supporting their households solely on their art sales and it’s ridiculous to pretend otherwise.

Back in 2015 my friend and fellow artist Robert Hardgrave suggested I introduce collage techniques into my practice.. That’s been working out pretty well so far…

Allow yourself to be restless and only occasionally satisfied.

…Oh, and when you’re on Instagram and somebody posts a photo of a work in progress, resist the temptation to tell them that you think it’s done, or that you like it as it is, or that it “looks finished to me!”. Trust me, just don’t.

My studio occupies a space converted from two previously separate bedrooms in the house we rent in Seattle. It’s generally a complete mess, with scraps of paper littering the floors and work surfaces, overflowing from the plastic bins that are used in a vain attempt to keep it all organized. The nature of my work unfortunately reinforces some hoarder behavior, as the detritus from one painting can often find its way into the composition of another, urging me to keep hold of every little scrap. This space has served me very well over the last several years, but as my work increases in scale I’m beginning to feel growing pains and am considering looking for a larger studio space elsewhere. That said, I tend to work very late into the early mornings and it’s nice to be able to just put down the brush and shuffle the ten feet to my bedroom door.

Music is a constant presence in the studio, sometimes audiobooks or podcasts when I’m engaged in less creatively demanding endeavors. There’s usually coffee, sometimes wine and occasionally a pug.

I received my BFA from the Minneapolis College of Art and design back in the Paleolithic era, at that time going on pursue an MFA wasn’t such a common path. It certainly wasn’t considered compulsory in the way it is today. I was actually looking into it before I got sidetracked into music. MCAD had a wonderful BFA program, fairly rigorous and conceptually driven. I was encouraged to study for eight months at the Osaka University of arts in Japan, something that impacted my life in ways that cannot be overstated. Art school taught me that questions are more often better than answers and that honesty of intent is the most valuable currency an artist has at their disposal.

Mostly it’s about time. Finding enough of it, using it efficiently and the constant tick tock in your ear that develops once you get past a certain age. I had thought that once I didn’t need the day job that this would recede, but that really hasn’t been the case. Part of it is the nature of my process. There are a lot of inherent inefficiencies and hoops to jump through to get a piece across the finish line, and that’s just how it is. I wouldn’t change that if I could. The bigger culprit is most likely that vaunted work-life balance that everyone wrestles with. The challenge particular to the artist is that the work never really stops.

Success is a moving target. I feel incredibly fortunate that I’ve gotten to the place I am professionally in such a relatively short amount of time. Most importantly I’ve been able to do so making work that is honest and constantly evolving while buoyed by increasing support and interest. Sometimes I look at my CV and it feels fairly anemic and I have to remind myself that despite my age I haven’t been at this very long. I didn’t really have any sort of a dedicated studio practice until 2011 and my first real solo show in a commercial gallery was less than six years ago. Things have been on a steady uptick ever since and new and exciting opportunities continue to present themselves. I used to think that personal success would be defined by a fixed thing, like supporting myself 100% through art making. Now I realize that success is a trajectory.

Much like the question regarding success, my most exciting accomplishment thus far is the trajectory I find myself on. It’s more about watching how everything is unfolding and presenting new opportunities that I find exciting than the individual accomplishments that have made up this path I’m on. For me the most exciting thing is that there is a next thing in the first place.

At the moment I’m finishing up work for my upcoming solo show at Gallery 16 in San Francisco in June. After I fly home from the opening I’ll be right back producing a new body of work for my show at Linda Hodges Gallery here in Seattle in November. It’s been a fun year so far.

Platforms like Young Space are incredibly valuable to artists such as myself working out in the hinterlands away from the concentrated art communities of New York and LA. The opportunities to connect and develop relationships outside of the smaller communities that so many of us work in is really special. Thank you for shining the light. 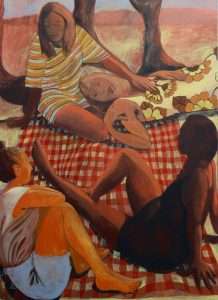 Nettle Grellier
Can you tell me a little bit about you? I studied Painting…