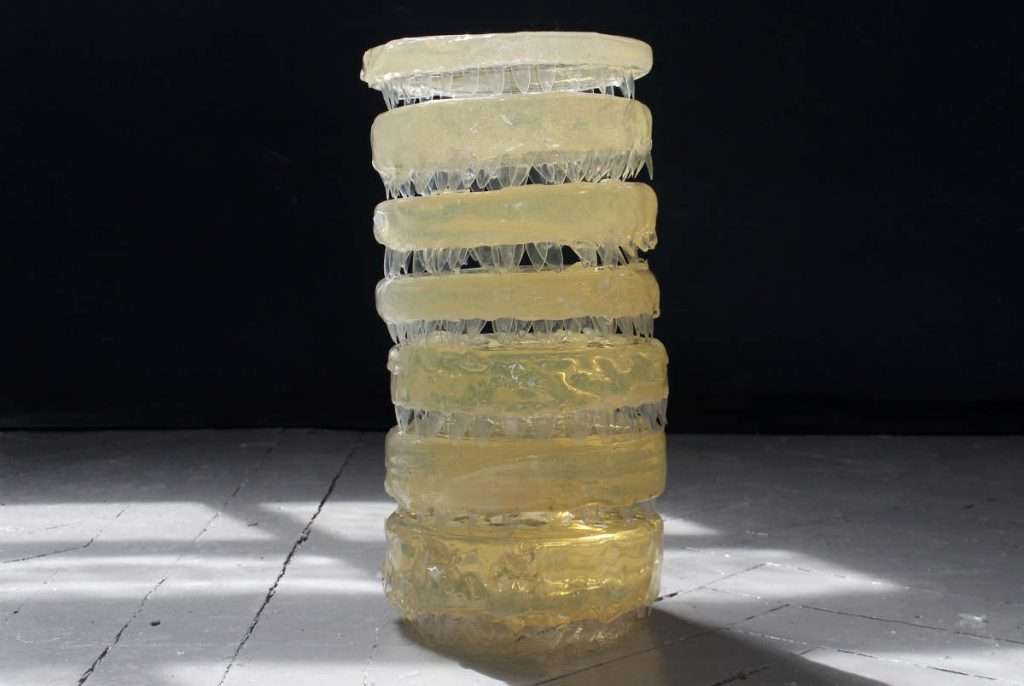 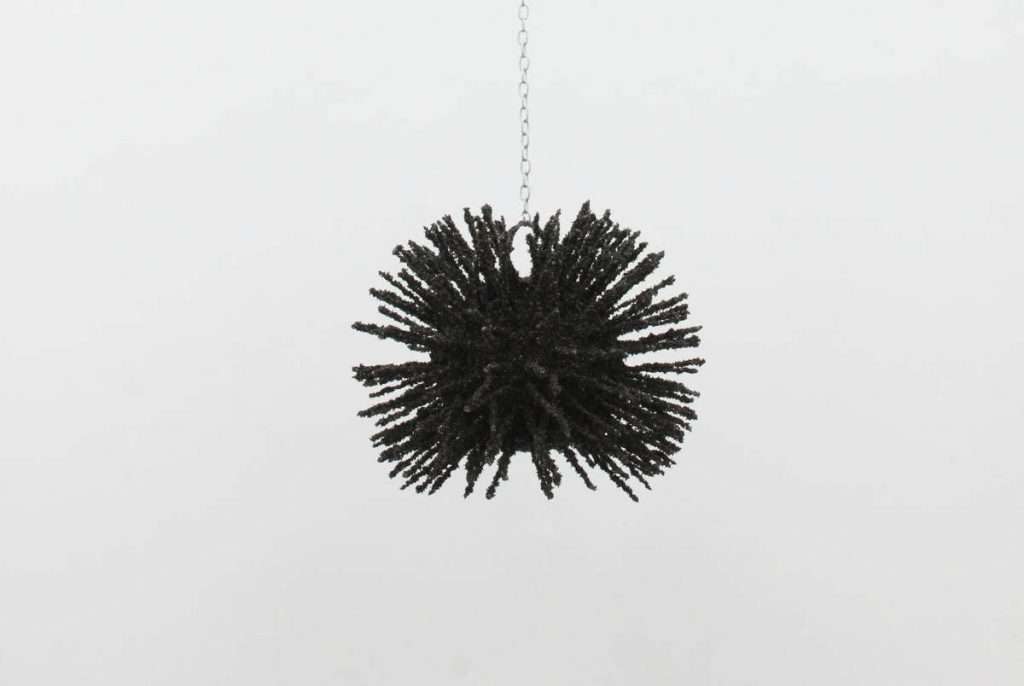 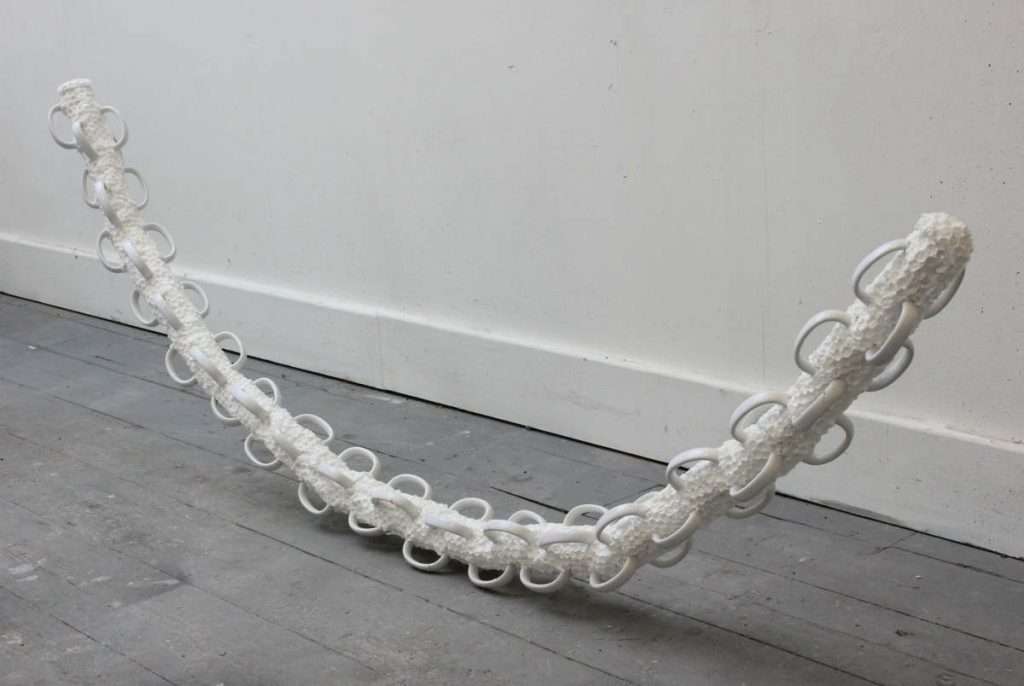 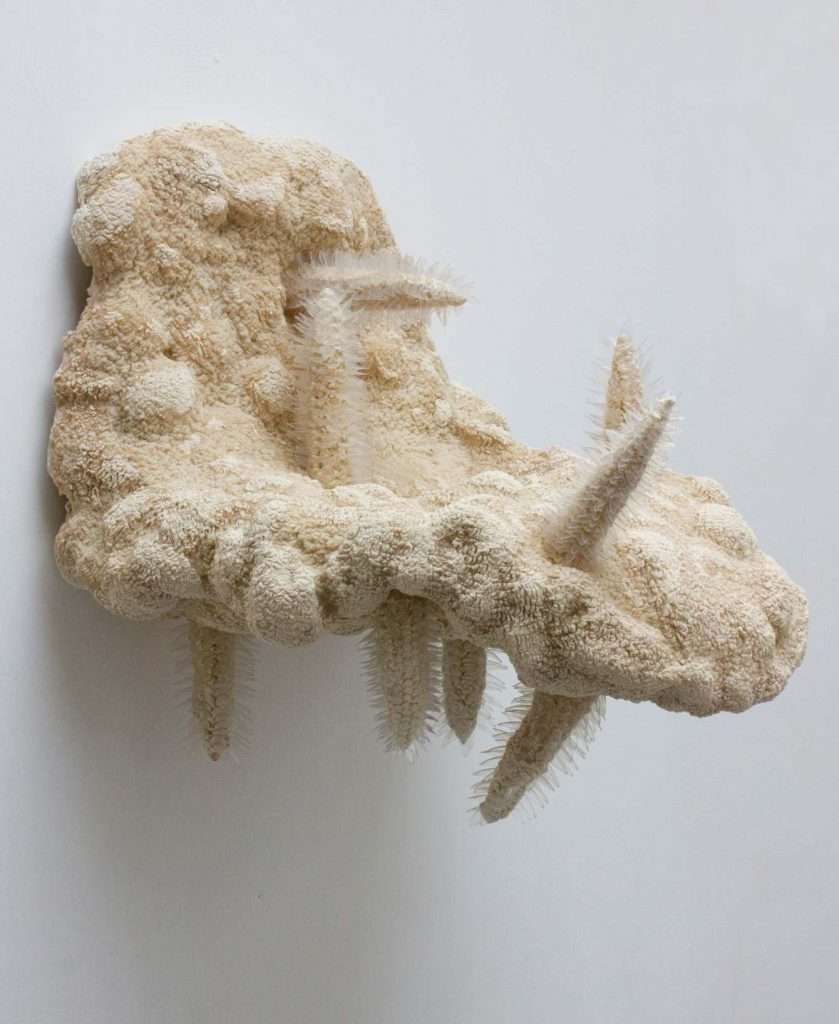 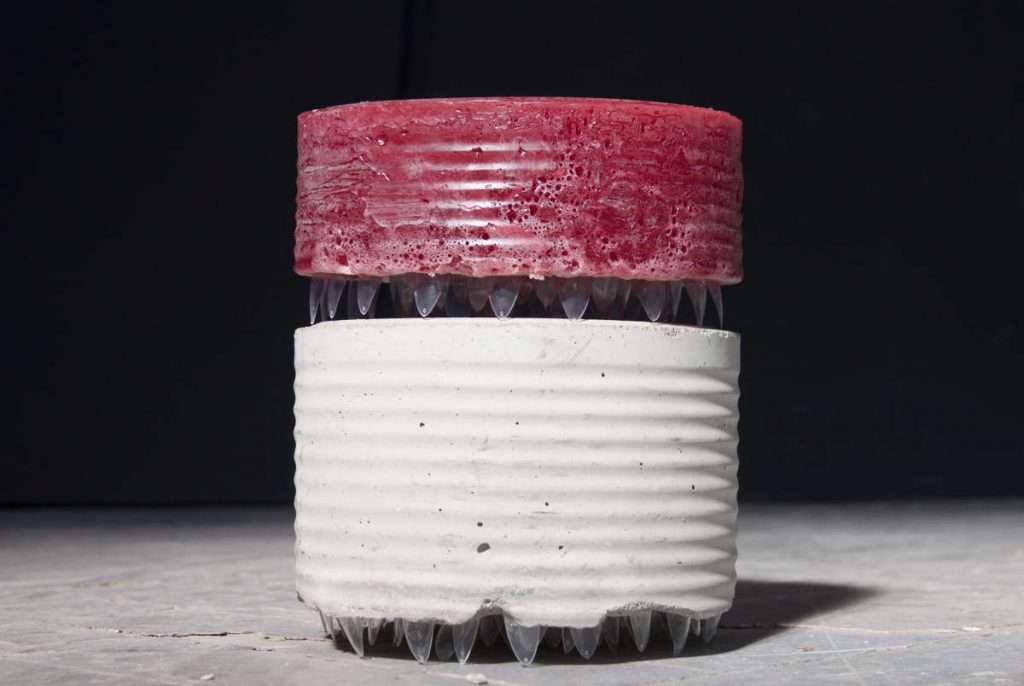 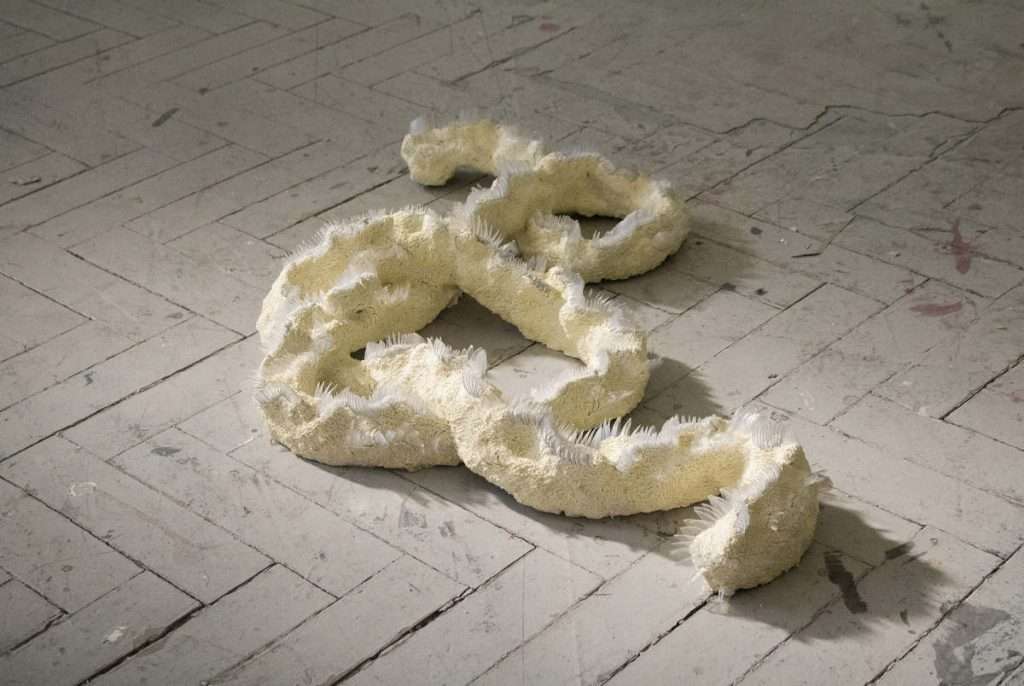 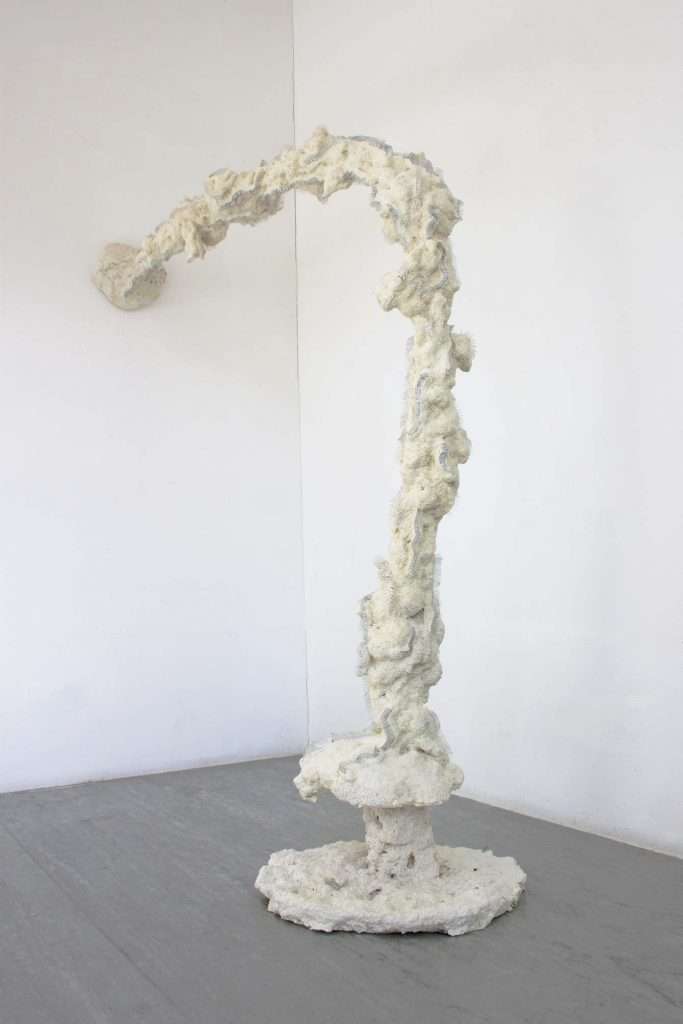 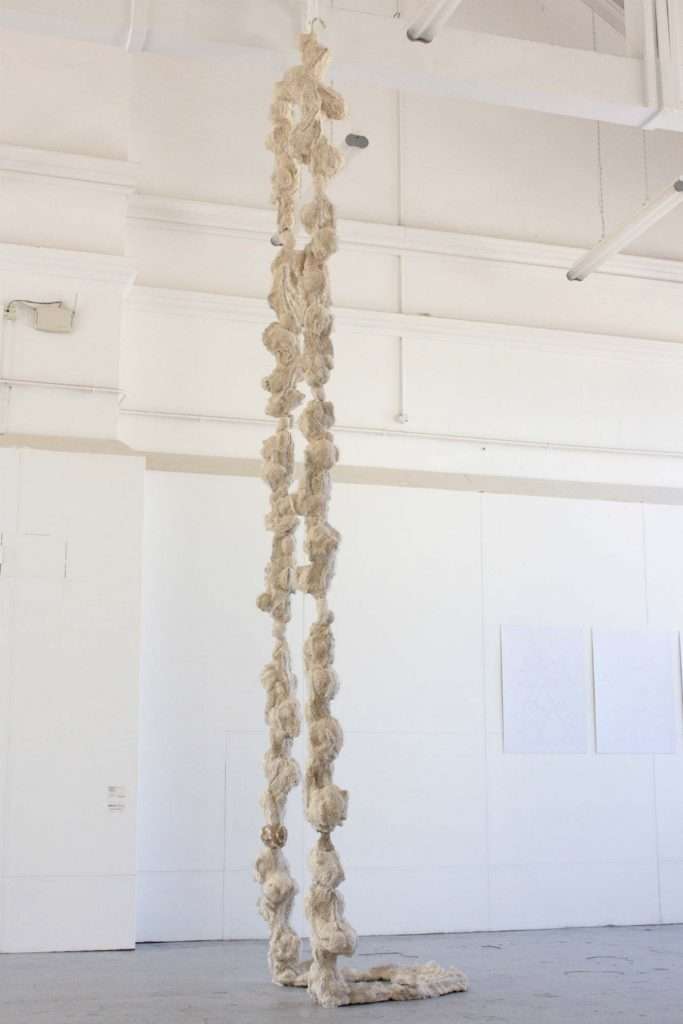 Originally from mid-west Wales, I am currently based in London as a recent graduate from Camberwell College of Arts. During my time at Camberwell I was in the Fine Art Drawing department, although my work is predominantly sculptural. Approaching sculpture with a grounding in drawing has undoubtedly influenced my process; I consider it as a process of three-dimensional mark making.

As children, we made our own fun at home and I still have drawers full of notebooks filled with drawings, stories, poems, as well as papier-mâché pigs, weird dolls made from mop heads and cardboard structures. My parents encouraged this, and we often went on trips to various museums and galleries… I remember using drawing as an excuse to avoid being questioned about this or that fact during these trips. This combination of creativity and curiosity about the arts naturally developed over time, and I can’t recall a certain point when I decided to become an artist.

My studio is the one place where I can totally disassociate myself from other elements in my life and just concentrate on making things. It’s an incredibly calming place where time becomes meaningless and being here gives me a similar sensation to spending time by the sea, something I miss a lot in London.

Currently I am interested in the role of the mass-produced readymade object within sculpture, the process of claiming an impersonal object and mould it into my own material. Recently I’ve been combining fake fingernails with salt dough in my sculptures, using the former as a mark making tool to repeatedly imprint itself on the latter, before merging it all together. This amalgamation of two totally contrasting materials, one of which is associated with the decorative and the other manual labour, results in an essentially nonsensical, ridiculous object; I guess it’s like when your repeat a word too many times and it becomes meaningless. Its this re-evaluation of our material world that fascinates me.

I’m a kinesthetic learner, and therefore my sculptures develop as I make them. After completing a sculpture, I take the ideas I want to develop and leave the rest behind. The process of the actual making is laborious. As an example, a recent sculpture Shapeshifter II is eleven metres long and its entire surface is imprinted with intricate mark-making made using a single fake nail. This interest in intense artistic labour is consistent in my practice, and most of my works grow through repetitive, process-led making.

I’ve started researching neolithic features in the Welsh landscape, concentrating on standing stones and their surrounding environments. I find the contrast between these ancient monuments, which are thousands of years old, and the consumerist, throw away culture in London to be very inspiring.

Some people find it bizarre that I spend hours sitting in a freezing studio late at night, smashing good quality mugs, stabbing fake fingernails into salt dough or sticking seeds onto anti-roosting spikes.

I’m constantly going through a range of jobs in order to support myself; currently I work at an arts centre, which is a good way of meeting other creatives and get access to various exhibitions and performances.

Leading on from my last answer, to maintain conversations with as many different people you can so as to build a whole range of different perspectives on things.

I don’t really know where to begin, it’s so important to have a sense of community and without it I’d feel completely lost.

I’ve been really lucky and have been awarded a free studio for a year (Vanguard Court studio award). It’s a wonderful space that I would otherwise not be able to afford and gives me enough space to simultaneously work on different sculptures and create larger works. I also love having people spend time there with me, and am using it as a space to host crits with other artists.

I’m trying to strike a balance between studio and work, but it doesn’t always work. Sometimes I’ll have long spells in the studio and then barely any time (which is always frustrating). Once I am there, I’ll make myself a coffee, sit down and consider the studio and sculptures before starting to work.

Personally, I found art school to be a really good experience; it’s not only the education itself, but the people you meet along the way and the places it leads to. You develop as a person as well as an artist. Saying that, it’s not for everyone and should never be forced on someone.

It’s pretty daunting being a young artist in London, there’s a constant juggle between making the work and financing it in this city.

On one hand, success is leaving the studio feeling good, teaching yourself new skills, educating yourself generally, having a confidence in your practice, and enjoying the making of your work. On the other hand, it’s being able to have an impact on someone else’s thought process, be it emotionally and/or intellectually.

Travelling to new places because of my art is always exciting. A couple of years ago I was lucky enough to travel to Japan thanks to a scholarship programme, and I also spent some months in Germany on a study exchange. I always hope to do more of that kind of thing in the future.

Since graduating this summer it’s mostly been casual meet ups where we crit each other’s work, organise group exhibitions etc.

I’m at the very beginnings of a new body of work, but have started experimenting with using hairbands to mimic monolithic rocks. 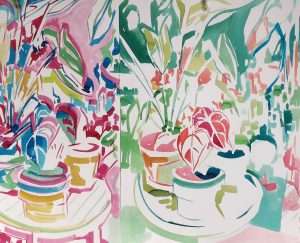 Emi Avora
Can you tell me a little bit about you? I come originally…