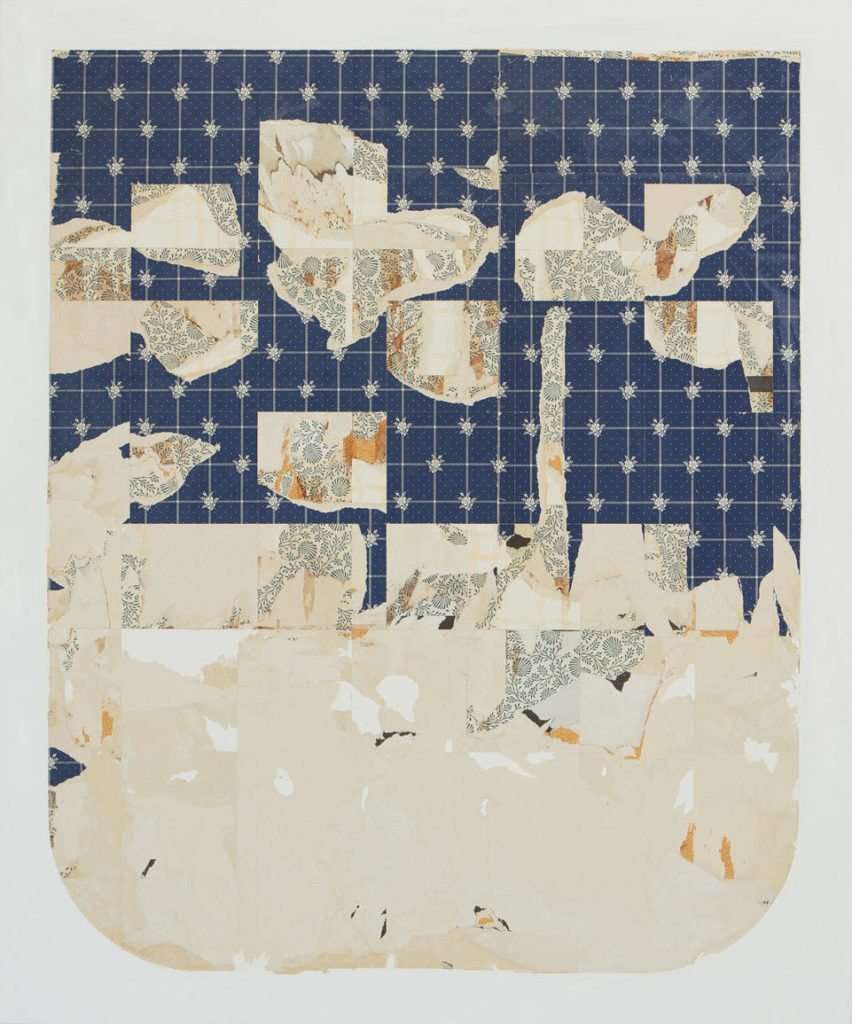 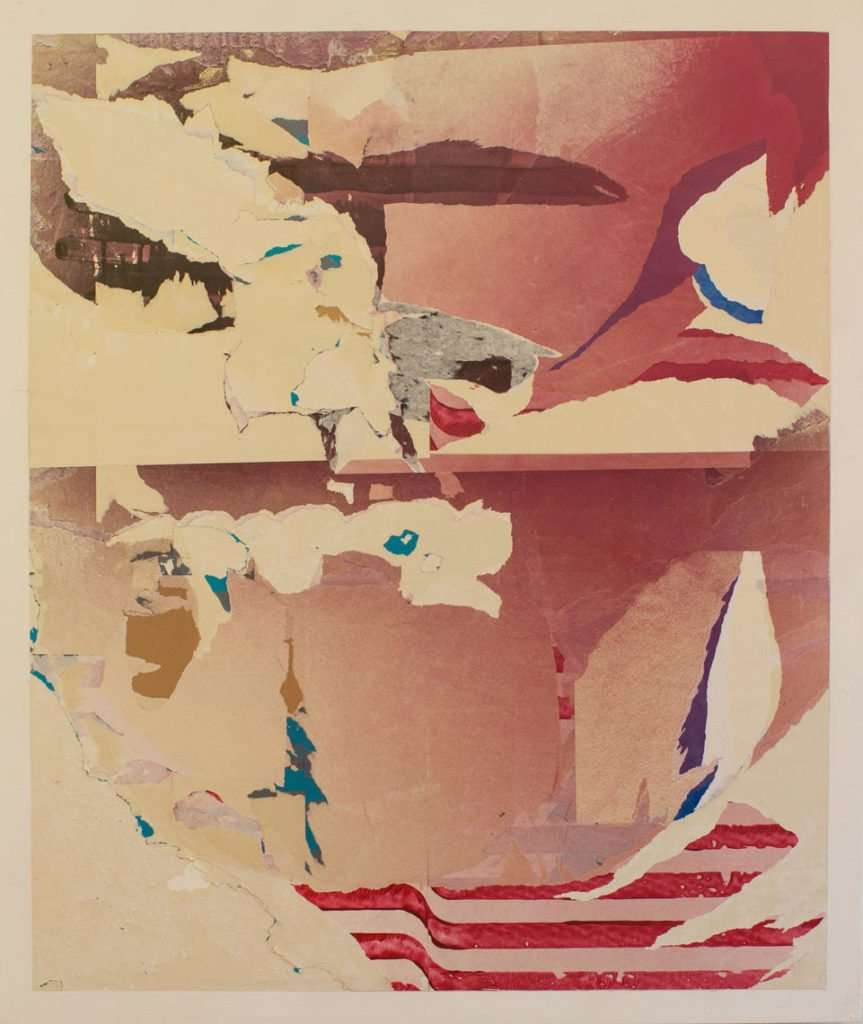 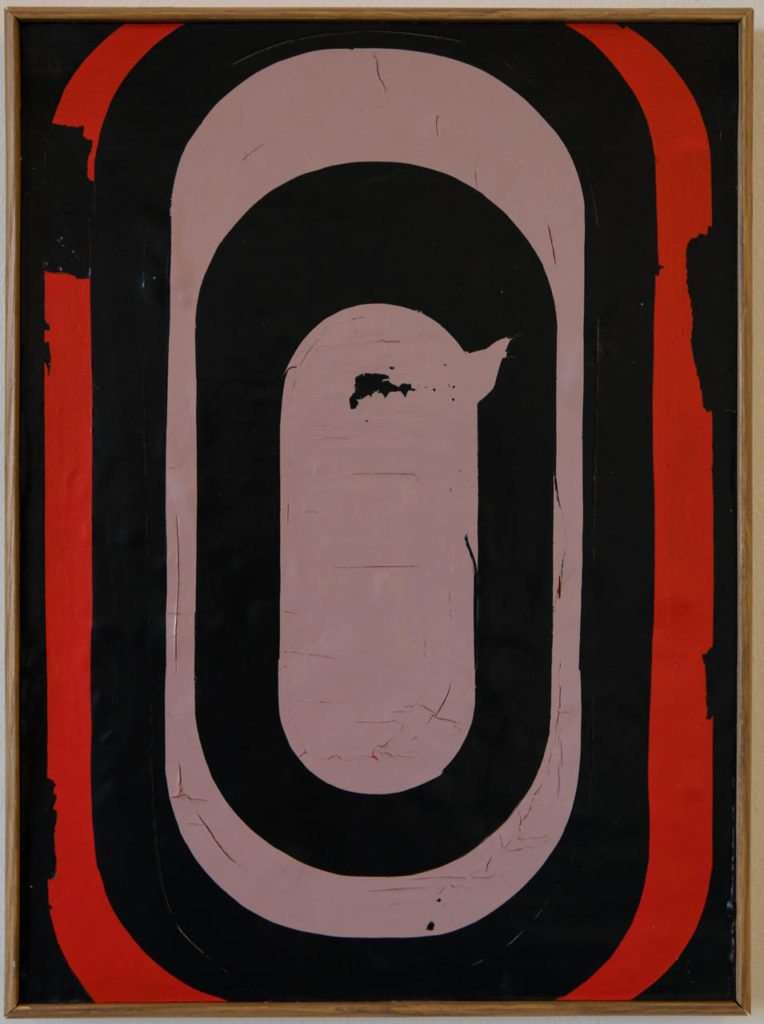 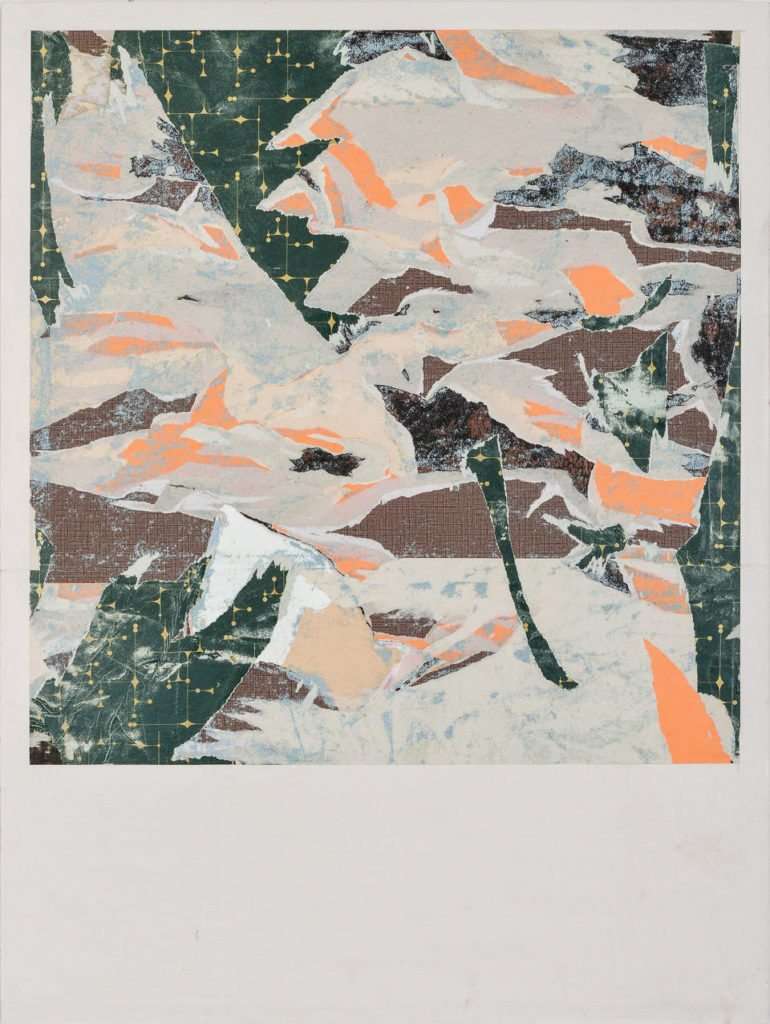 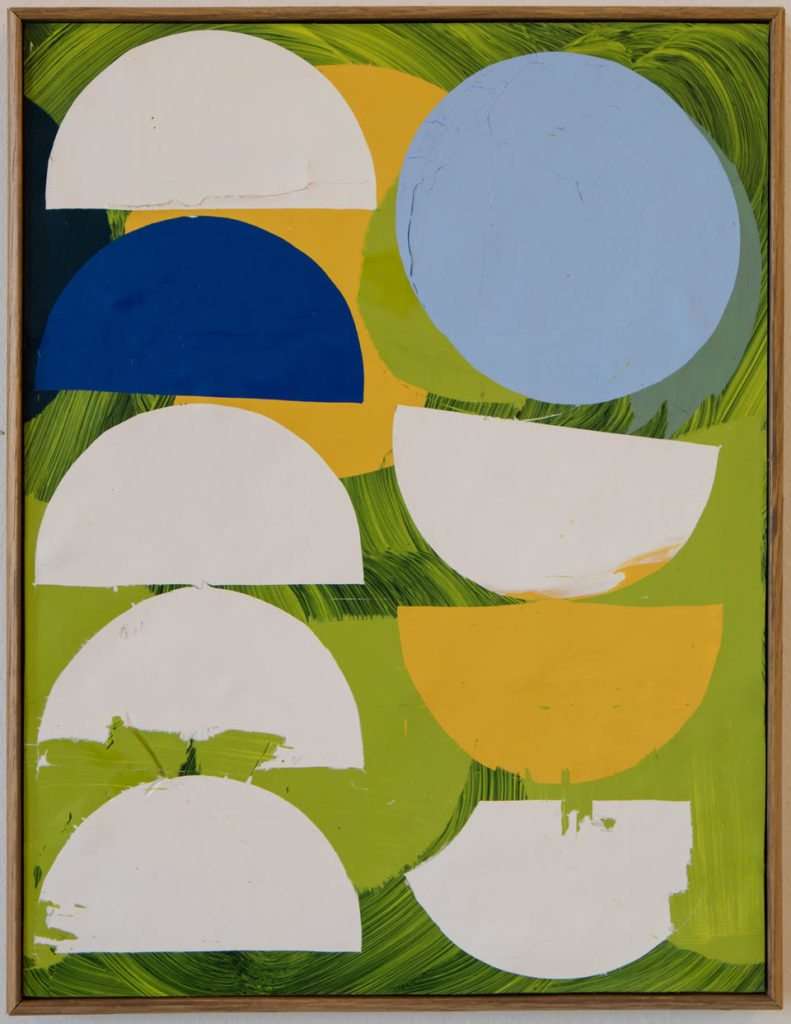 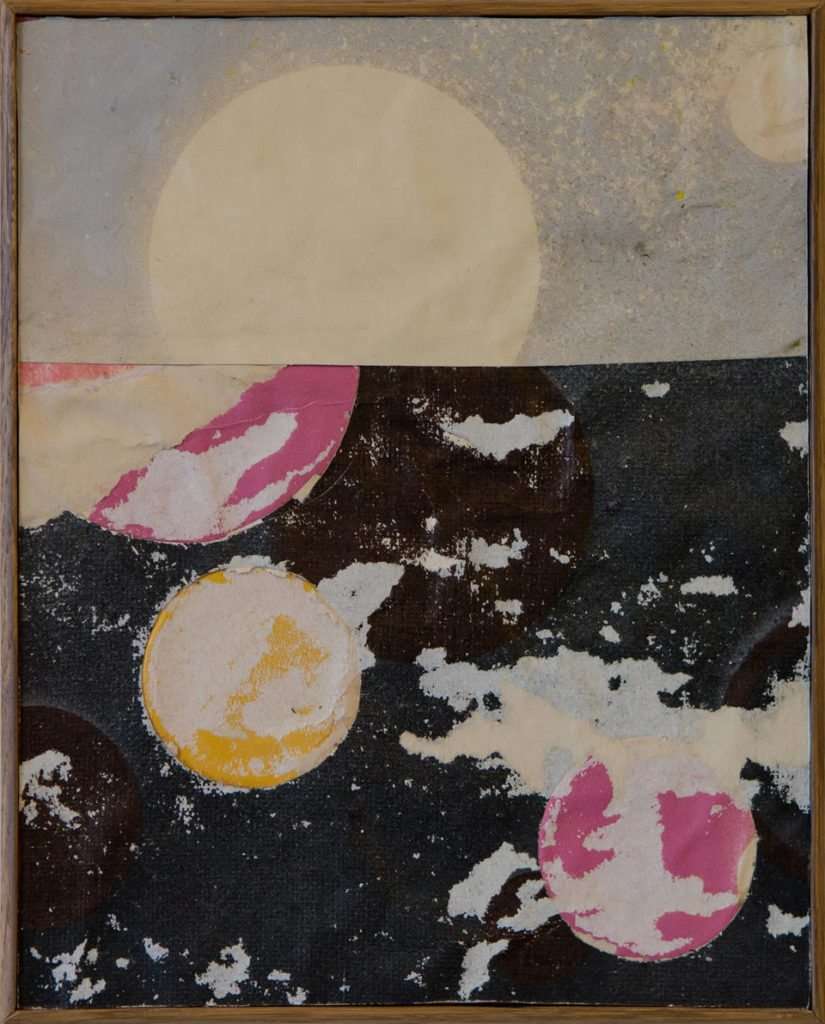 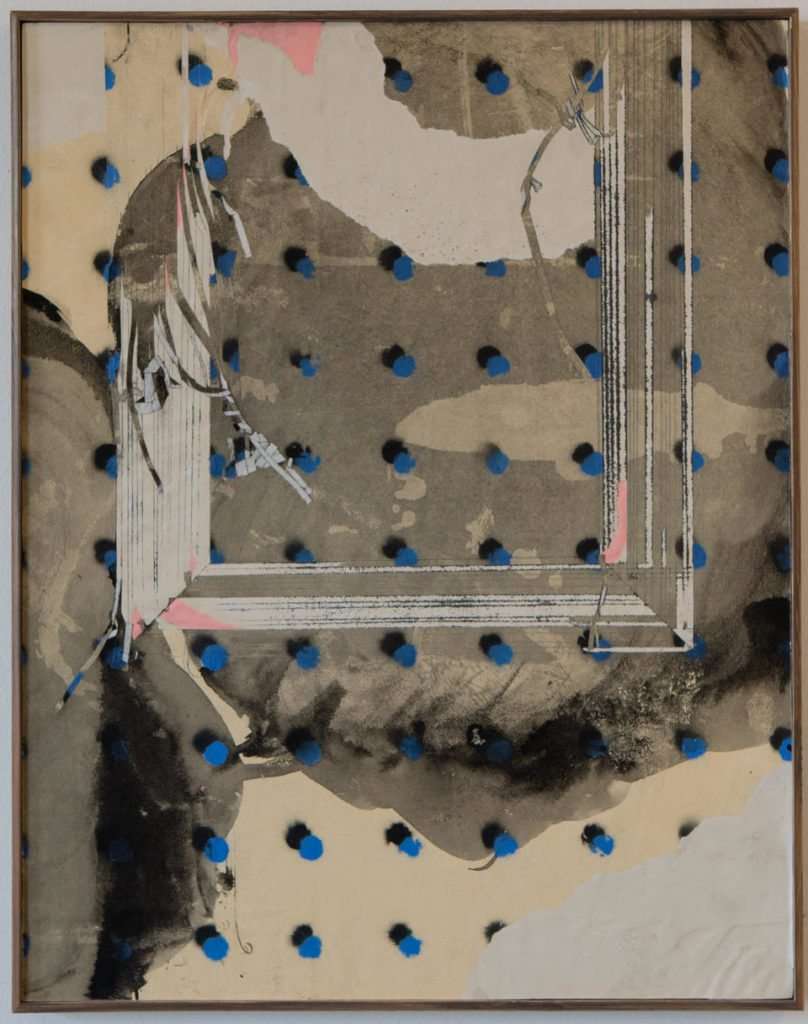 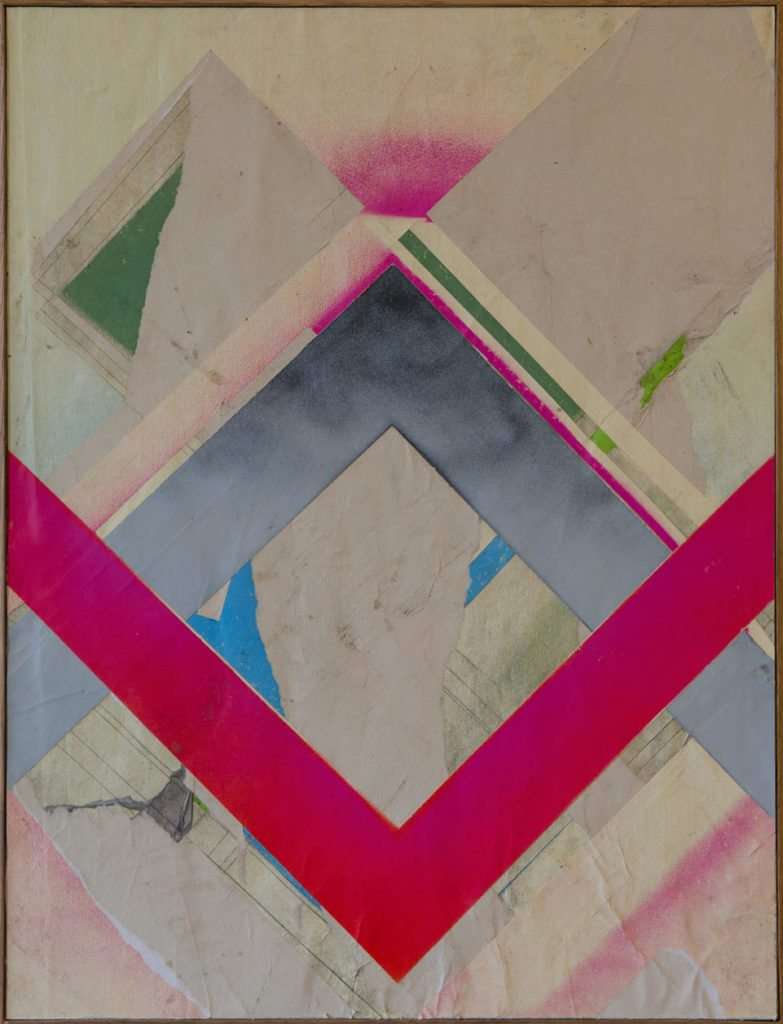 Hi Kate, I graduated in 2008 from Rietveld Academy in Amsterdam, The Netherlands. I focused on painting and in the first year after the academy i got interested in breaking down imagery. The reduction of information as a way to build up paintings. I started out breaking down my oil paintings and continued to do so with magazine pages and found photographs.

Nowadays I mainly work with wallpaper. Applying the wallpaper to the panels, tearing it off again and thus creating a possibility for some unexpected form to take place. This process takes place over and over until I reach a satisfactory composition.

As a kid I was busy a lot of the time with drawing and painting. Around my 16th i got into making music and did that feverishly for about 15 years. I was gonna be a musician! I tried my best not to become an artist even though it kept pulling me. When the whole musician thing went down the drain, i looked around for something to do with my life. I really did not want to do the whole artist thing, mainly because i was afraid of the financial insecurity. At some point in my life though, i discovered i could no longer deny it. I decided to go for it. After all, i am very happy i did so

The red thread through my works from the last ten years has most definitely been the use of destruction in order to create. I guess I see myself more as an investigator of imagery than a painter, (even though painting is my main medium). Sometimes my practice is described as ‘decollage’, following people like Raymond Haines or Mimmo Rotella. But i would say that those artists were way more involved with their time. Compared to their posters, that depict a lot of their times popular culture, my medium, the wallpaper, is much more neutral. I am also not trying to say anything about decay, vanitas, the passing of time or any other, romantic idea. My work is merely based on investigating what happens when i take out information. To create a context in which coincedences can happen.

Over a period of years, I always seem to work on 3 series that influence each other.

Right now my main focus are my wallpaper paintings. Mostly larger paintings (up from 120 x 100 cm to 360 x 240 cm) that are made on wooden panels. The panels are wallpapered, a few layers and sometimes loosely painted over with watered down acrylics, inks or spraypaint. Then parts are torn off, revealing a layer under the toplayer. This process is redone over and over untill the piece is done.

Working with the wallpaper, i was introduced to a lot of different patterns. The wallpaper came in all sorts of colors with patterns in all different shapes, graphic or otherwise. At the time I was thinking of a way to do something with paint again as well. I had seen an interesting technique that i decided to fool around with. I take a thick glass plate on which i apply a thick layer of acrylic paint, the base-layer. Then i cut a form out of the base-layer and peel the paint of off the glass. Say; a circle. If I then fill that circle-formed hole with another colour and I look at the other side of the glass plate i will see a rectangular layer of colour with another coloured circle in it. I then repeat this process with many different colours building up an image. Because of the different tensions of the different layers of paint, the forms start to warp, bleed under or into each other and sometimes ‘bubble’ up, forcing me to remove parts and reveal an unexpected form. When I at some point am satisfied with the result, i remove the entire painting from the glass and mount it on a panel.

Lastly there is a series called: withdrawal symptoms. These are made after I posed myself the question: if the wallpaper paintings are paintings, then what would a drawing look like. They are generally smaller than the paintings, made quicker and therefore have more intuitive feel than the paintings. Also, with a knife i cut lines in the works and wash them in with watered down inks, resembling a classic pencil line

In my hometown i am greatly influenced by an artist called Jan Maarten Voskuil. Next to his work, which I love, I am also really influenced by him because of his work ethic. He showed me how to work hard and follow up. Globally, i would say Gerhard Richter is the alltime boss of painting. Mostly since his curiosity spanned so many different areas in the world of painting. From photo-realism to hardedge colourfield paintings and everything in between. All carried out with the same conviction. No bullshit, just always interrogating the medium

I have a rather small studio (26m2) in a 400 year old building overlooking a city’s river. Quite chique! unfortunately the building is not the most suitable for someone that makes gigantic paintings. I clean and paint the studio about every 6 months, after every workperiod before going into the next period. I like to have a fresh start

I guess that would be staying patient about your career. Staying forceful and optimistic even in times when it is harder to carry on.

If you could sit down for dinner or a drink with anyone, who would it be and what would you chat about?

I guess I would like to sit down with both my grandpa’s and talk about stuff. I never met them, but I would like to know who they were in the prime of their lives. Next to that I would really like to have a conversation with my cat.

I am a strong believer of the theory that you have to feed other parts of your life as well, next to your art. Otherwise you will have nothing to give to your work. So if you are stuck; go do something else. Go outside, read a book, play poker, make a meal, have sex….stuff like that. However, try to feel out if you are really dried up at that moment, or if you are just stalling or postponing your work. be honest about it. If so, stick with your work and be firm with yourself.

What do you love most about your medium? What challenges or surprises you most about it?

What I love about my way of working is that I designed a playground for myself that is quite large and has plenty of areas to discover. I love the fact that with just working, i get to other parts of that playground that i didn’t even knew they were there. I love that things come into existence that I cant make up, they just come into being themselves

What keeps you creating?

I have my second solo exhibition at my Dutch gallery, C&H Gallery. For the first time the focus is more on a large number of smaller works instead of a few large works. 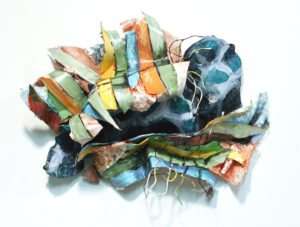 Christina Massey
Tell me a little bit about you! I'm a Brooklyn based artist,…