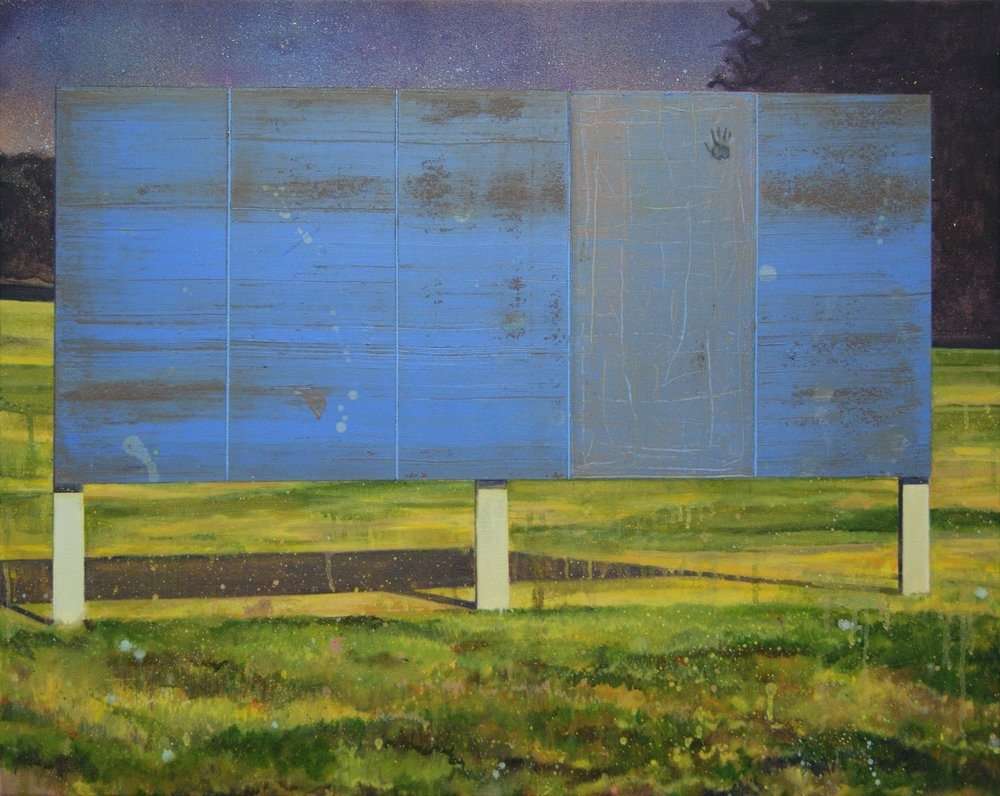 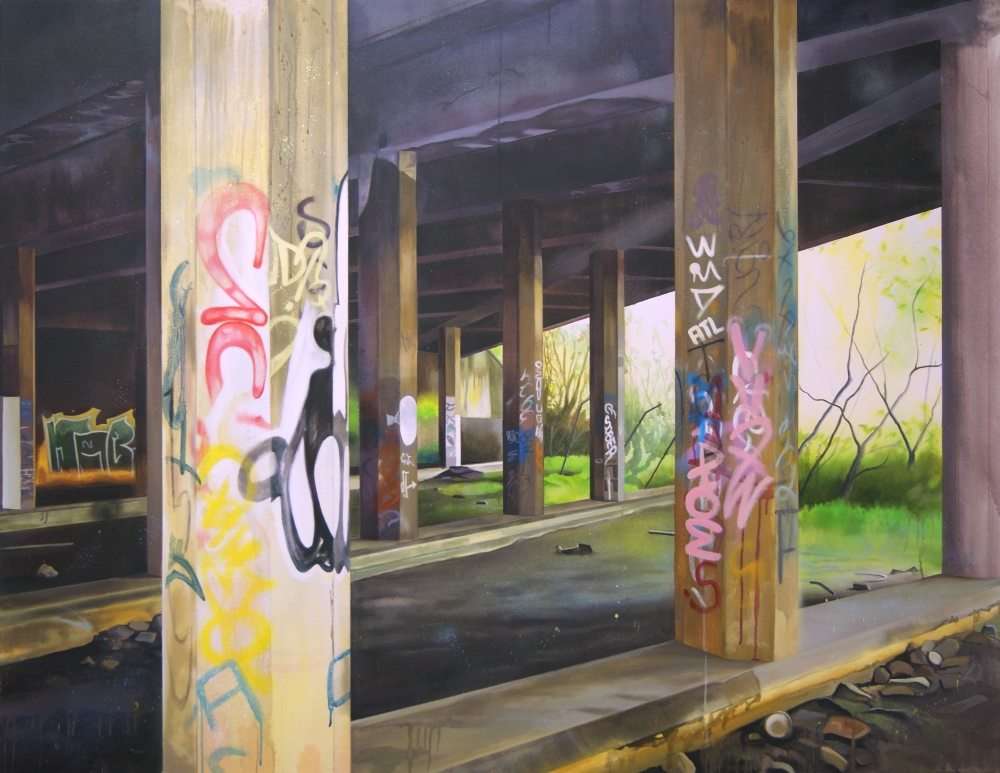 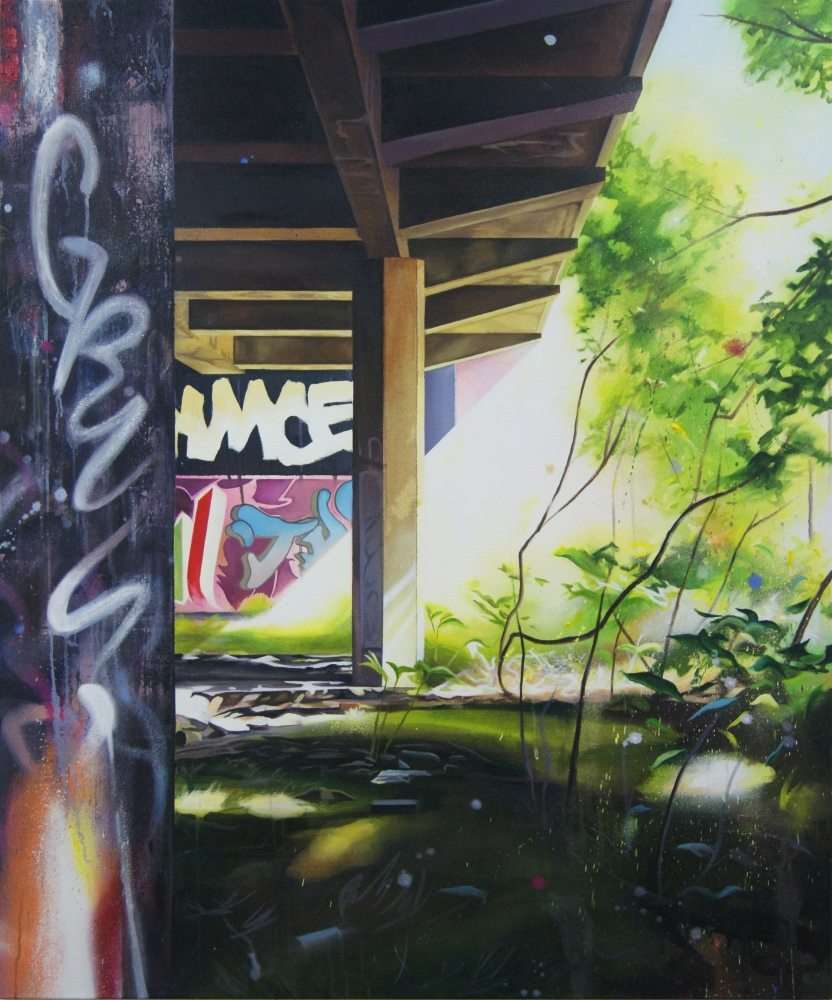 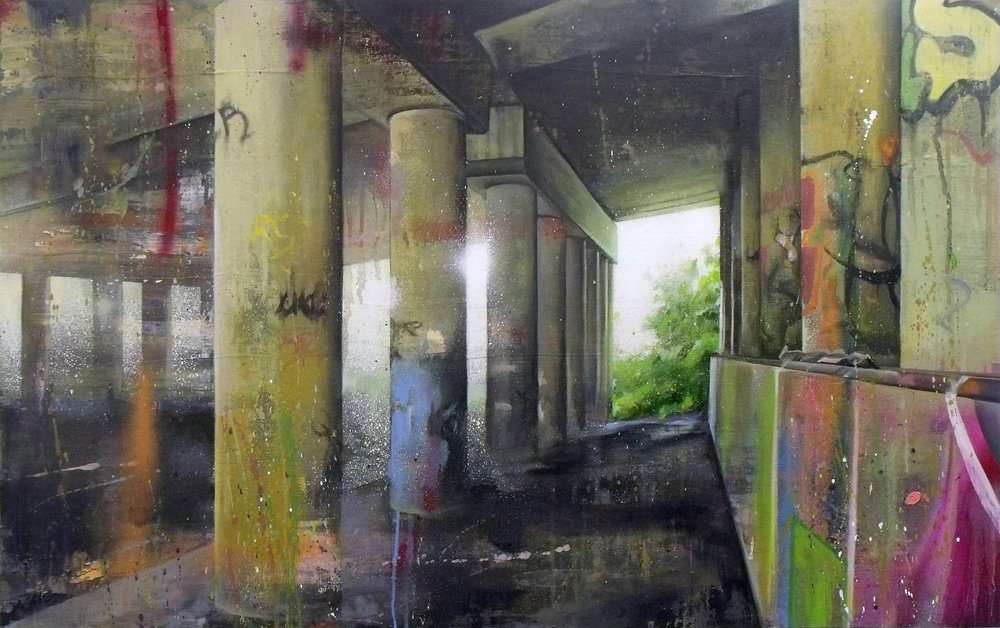 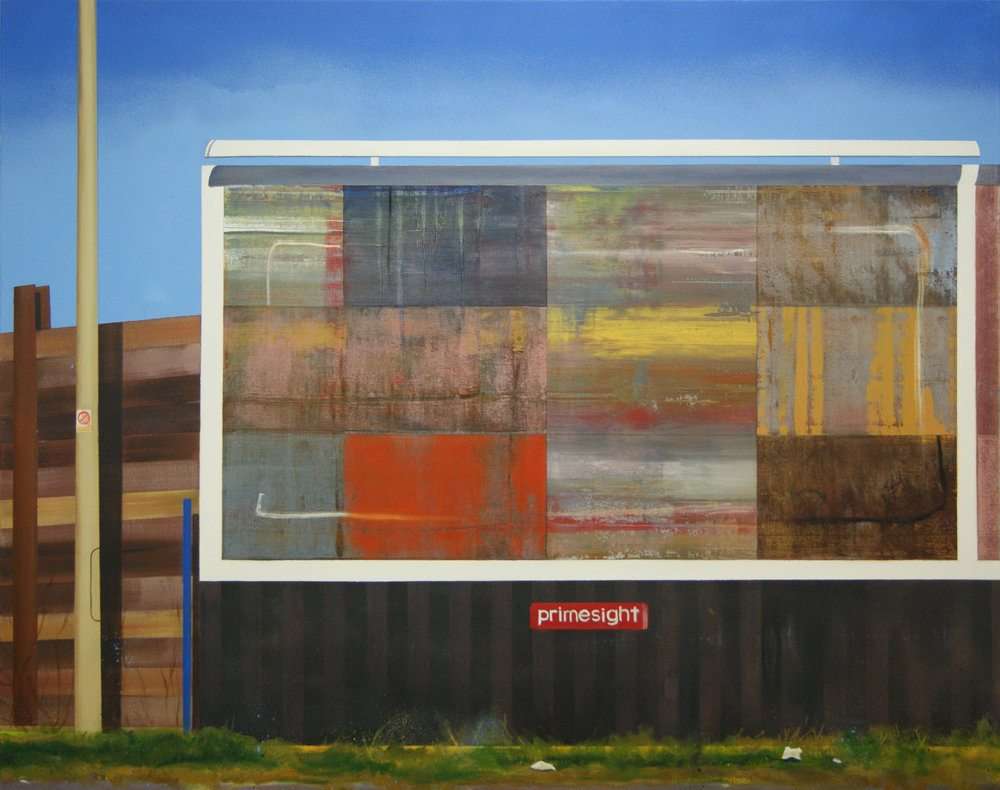 And for something just a little different! Edinburgh-based painter Ross Brown's urban landscapes play with the notion of compositions within compositions, and locations that have been given back to time or in the process of reconstruction. He has a solo exhibition opening at Arusha Gallery in Edinburgh from 6-17 July! Find more at the links below!

I’d love to know a bit about you! Can you introduce yourself?

I’m an artist based in Edinburgh.  I grew up in Clackmannanshire, Scotland and studied at Duncan of Jordanstone College of Art in Dundee (BA and MFA).

When did you first discover or become interested in art? Was there a moment when you knew you wanted to pursue making it?

My Mother is a painter, so I was encouraged to draw and paint from an early age.  As a teenager I spent most of my free-time rollerblading in nearby cities, which provided the roots of my interest in the urban environment.   At age 16 I visited the Musee D’Orsay in Paris whilst on a family holiday and saw paintings by Pierre Soulages; I remember being blown away by the monumental/architectural aspect I saw within his work, perhaps likening the experience of light within the paintings to the concrete multi-storey car parks where we’d spend time skating.  It was around this time I applied to study at art school.

Your paintings emphasize abandoned urban landscapes and remnants of advertising billboards or street art, often with a feeling of being quite remote. What about this subject matter intrigues you?

Nowadays I find most of my subject matter whilst travelling within the city; whilst walking, cycling or driving.  I’m particularly interested in spaces where the stable veneer of the city is peeling away; areas that are caught within a process of decay or reconstruction.  Within this type of space there’s often a spontaneous quality that’s present when architecture and nature overlap or when surfaces change and weather incrementally over time.  I try to use painting processes that allow a certain amount of spontaneity to occur within the image itself; using poured, smeared and dripped paint alongside more measured and controlled responses.  Ultimately, I’m interested in the urban landscape as a form of palimpsest that’s constantly changing, shifting, adapting and the traces that are left behind as a result of this process.

The ‘Billboard’ and ‘Sign’ paintings stemmed from seeing blank billboards within the city and considering them as found abstract monochromes.  To an extent I was interested in what happens when a “high art” category like abstraction is found within seemingly banal objects.  A lot of my previous work played around with the categories of abstraction and representation by using processes that are more readily associated with abstraction to representational ends.  The ‘Billboard’ and ‘Sign’ paintings take this one step further by flattening the pictorial space, depicting the billboard surface perpendicularly to the surface of the painting.  I see my work as being as much about the technicalities of image construction as it is about urban landscape.

Do you visit the places that appear in your paintings?

My working process usually begins by visiting a particular area and taking a lot of photographs.  In art school I got interested in theory relating to the Situationists, a group of artists from the 70’s who pioneered the Dérive; a kind of urban wandering that they used as a research process.  My most recent work has gone back to this way of thinking, depicting subject matter that I’ve found (often by chance) whilst travelling through the city.  Direct experience of these locations is important as I often try to reproduce something of the bodily experience of being present within these places, primarily visually, but also through physical things like scale in relation to the viewer, surface texture and tactility.

My previous work involved a fair amount of reading-based research.  Past series’ each focused on  one particular building from which I’d create a series of 6 or 7 paintings.  At this point I felt a certain responsibility to immerse myself in the historical background and surrounding context of the architecture I was depicting, however this became problematic as I was spending more and more time reading and writing, and less time painting.

With this new series, I’ve taken a step away from focusing entirely on one specific architectural site to take a more general view of my surroundings.  A lot of the places and objects I’ve approached don’t have a formal (written) history attached to them; the billboard works for example could be based on practically identical billboards found across the UK.  By taking a step back from presenting a direct historical narrative, I feel as though I’ve had more space to experiment with the formal aspects of painting; colour, texture and composition.

Individual works can take from 2-3 days to 2 months depending on the scale and complexity of the image.

I currently have a studio space amongst a series of old industrial workshops, so there’s lots of subject matter directly on my doorstep. 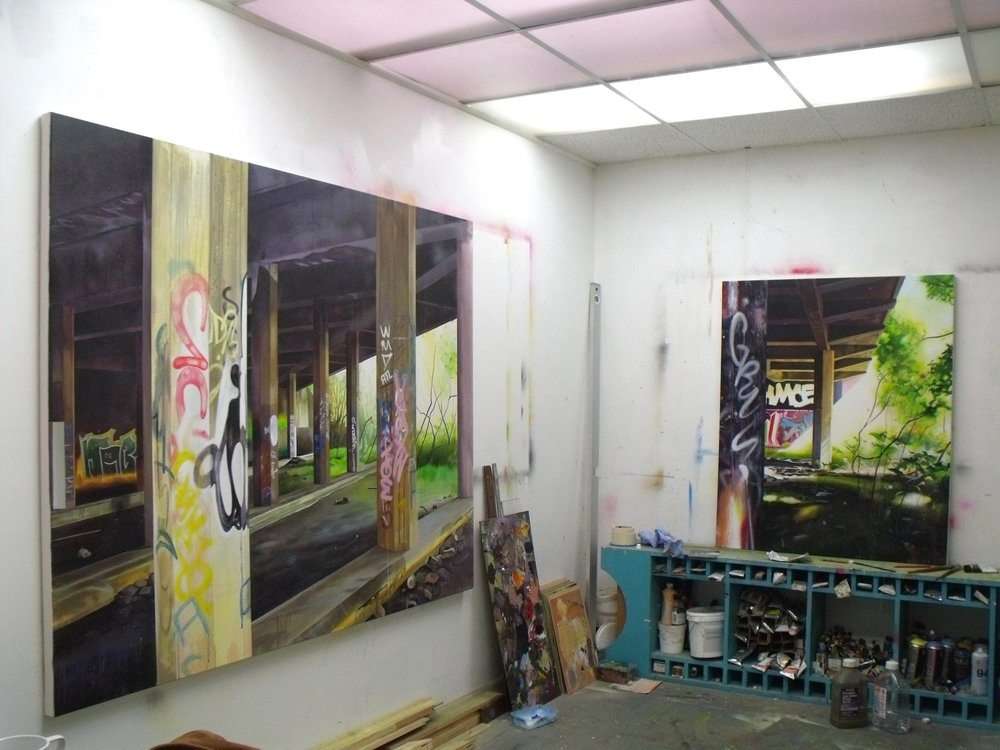 Do you have any routines or rituals in the studio that get you in the mode to create?

Like most artists I tend to drink a lot of coffee and listen to music.  Current favourites include Run the Jewels, The Fall and Scott Walker.  And Nescafe Azera for coffee.

Do you have a favorite mantra, quote, or piece of advice you rely on when you’re working?

I used to like the Chuck Close line “Inspiration is for amateurs – the rest of us just show up and get to work”, however I feel there’s a danger of work becoming stale and routine if this is followed too closely.

What is or has been the most challenging or daunting aspect of pursuing art?

The main challenges I’ve experienced relate to the professional aspects of working as an artist; art school was great in that it gave me support and time to define the type of work I wanted to make, but there was little to no introduction to the gallery system and how it works.  I was fortunate to receive attention shortly after graduating from the MFA through being selected for Saatchi New Sensations and featured within the Catlin Guide (a yearly publication featuring the work of art graduates across the UK).  Through this exposure, I gained gallery representation very early in my career, however coming to grips with the ‘business side’ of being an artist has involved a fair amount of trial and error.

I’ve just finished work for my solo exhibition titled ‘Terra Incognita’ at Arusha Gallery in Edinburgh, which opens on the 6th and runs from the 7th to the 17th of July.  Beyond this I hope to experiment with printmaking, which is a medium I’ve yet to try so I’m looking forward to it! 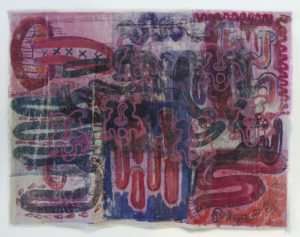 Aviv Benn
First, tell me a bit about you! Where are you from, and…