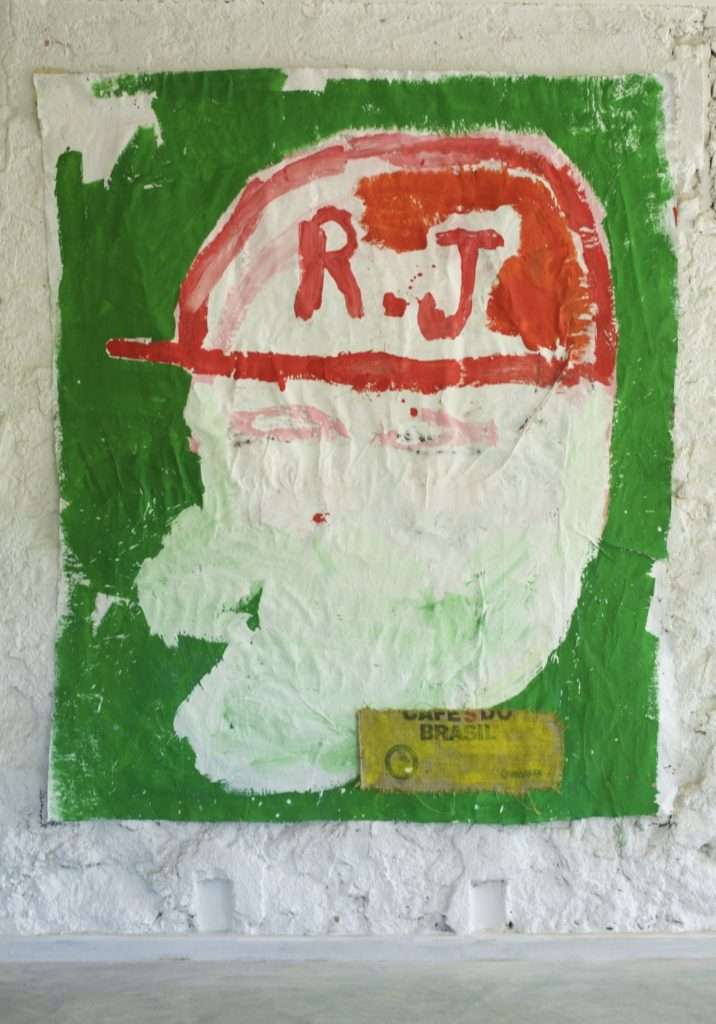 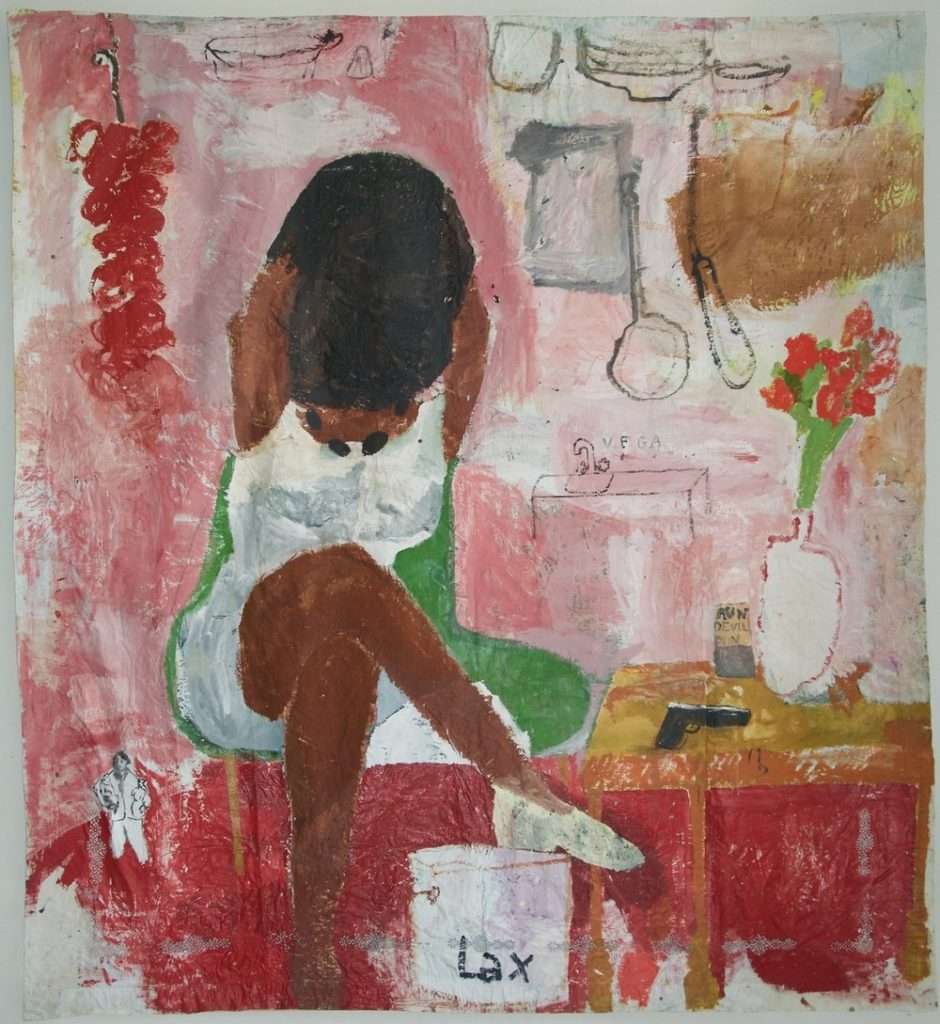 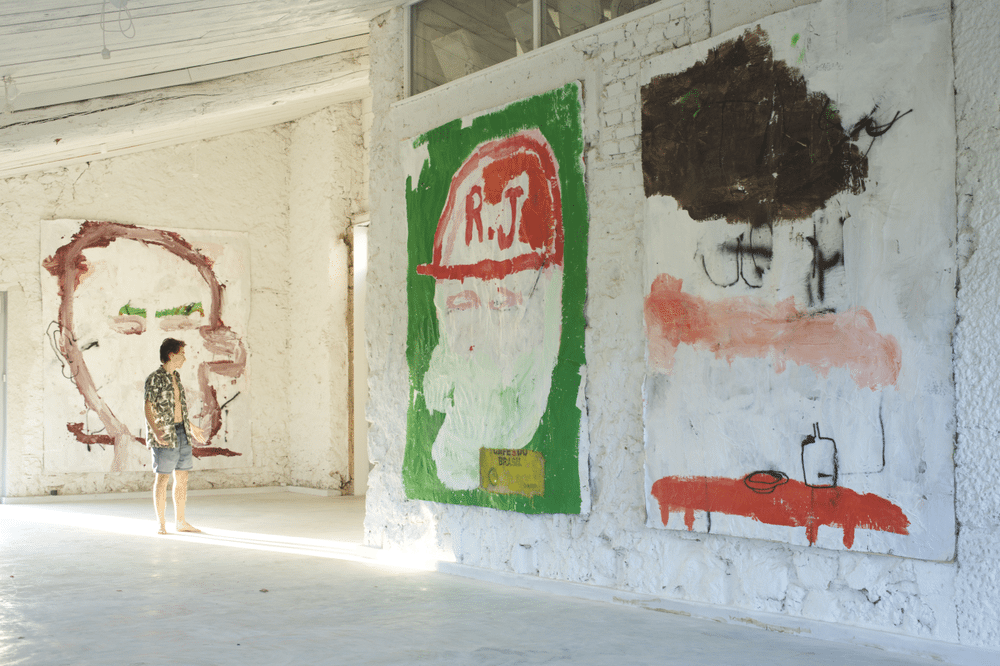 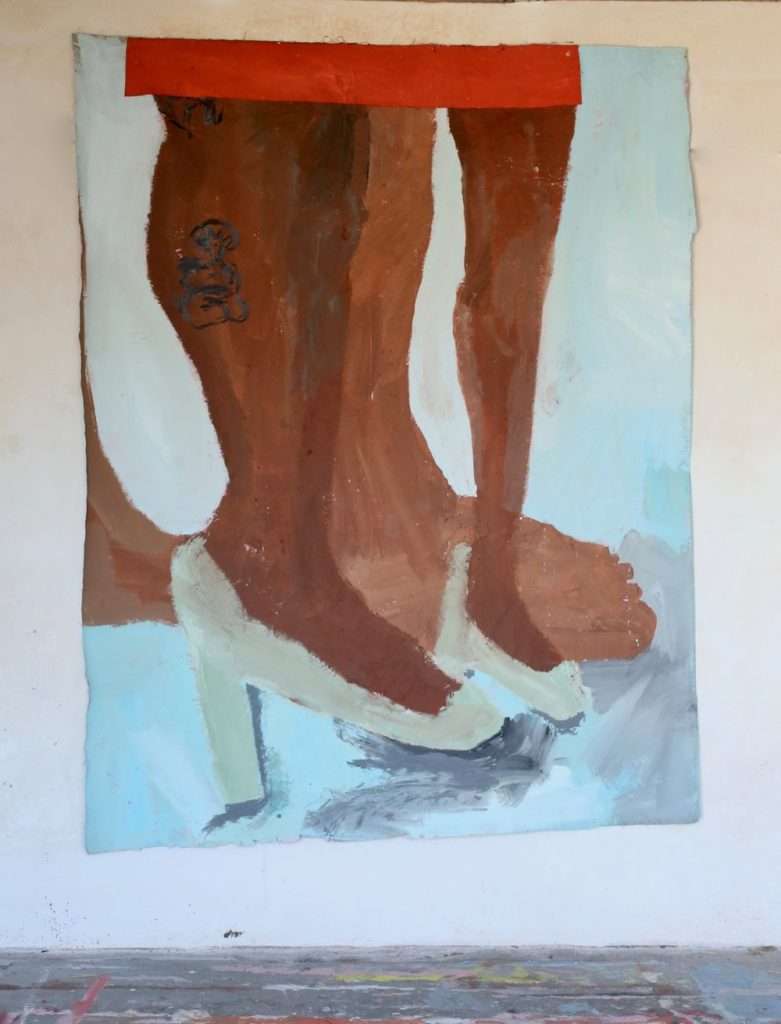 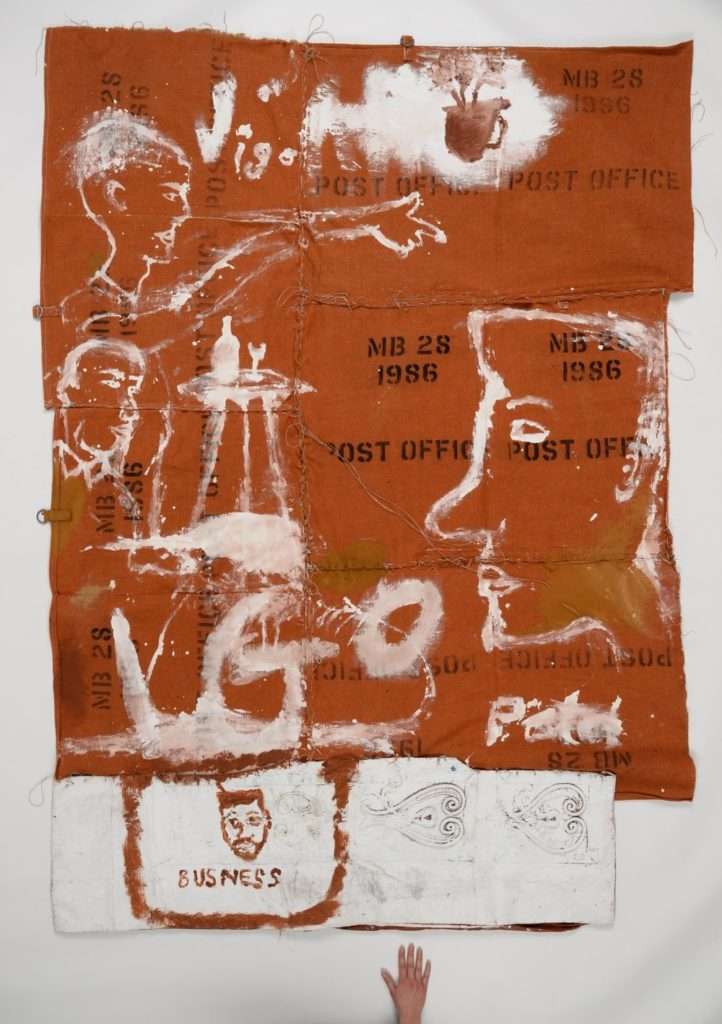 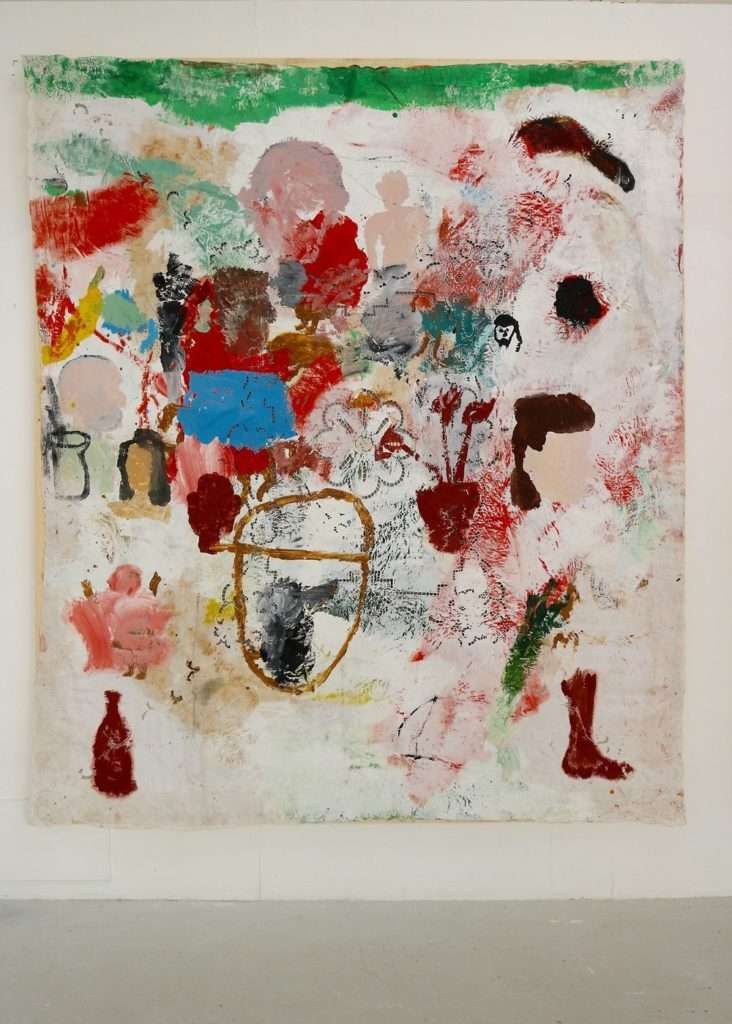 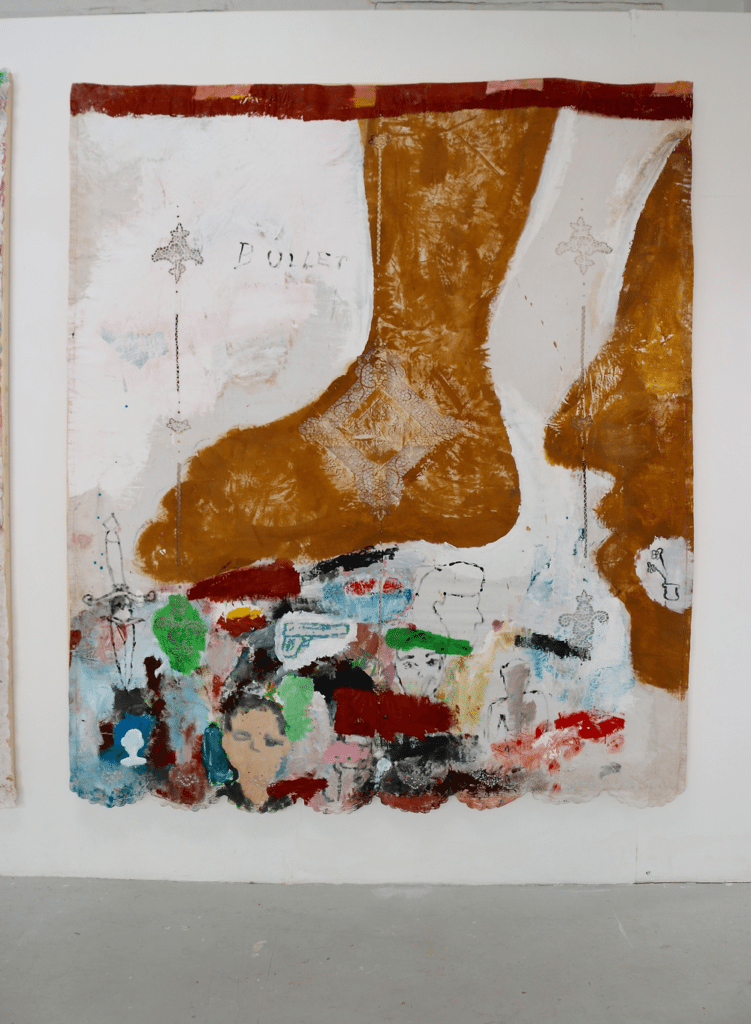 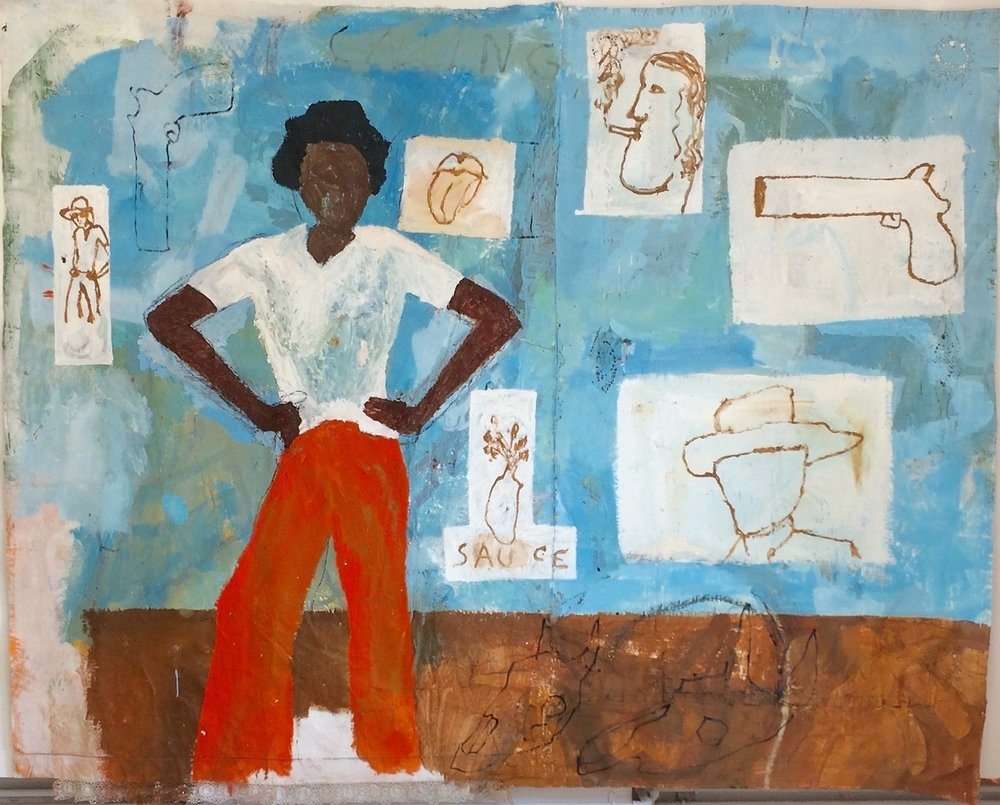 Fantastic canvases from London-based artist Maïa Régis who has just graduated from Chelsea College of Arts and is about to head to the Royal College of Arts to continue studies. Marvelously raw, visceral surfaces continue to reward the viewer upon further observation, as details and subtleties reveal themselves. Fantastic interview here, and make sure to check out the links below!

I’d love to know a bit about you! You’re currently in London, as you’ve been at Chelsea College of Arts and headed to the Royal College of Arts to continue studying painting next year. Where are you from originally?

My dad introduced me to the art world, and educated me with images of the greats: Mirò, Picasso, Matisse… I used to paint with him in the basement of our apartment in Paris. I did life drawing classes, sculpture classes… I always stayed close to it. Then after the Baccalauréat (A levels), I was so sick of the school system, I was sure that I wanted to do something creative, where you don’t have to learn anything by heart, and you can make your own rules, be your own boss. I did a foundation course in London and immediately enjoyed the sense of freedom of doing strictly what I like.

What was your experience like in the BA program at Chelsea?

I was always a bit critical about not having more than just one hour of lecture a week but going three month in an exchange in Vancouver last year, where the system is the opposite of the one in London, made me realize that I actually can’t stand having to attend mandatory classes you’re not interested in for grades. It was like going back to high school.

It made me reconsider the chance that I have to be in a school that actually lets you do whatever you want, space to do your own thing. Also, the good point of Chelsea is that they make you do lots of shows, inside and outside of school.

What do you hope to achieve or explore more of at RCA?

I hope to continue evolving with my work. Having a place to work, focus on developing my own visual language. I love South London and being located not so far from Brixton, with its electric avenue food market that was a great source of inspiration will help a lot.

Much of your work is very large, abstract, and installed on unstretched canvas, making it feel really visceral and gritty. Can you tell me more about your paintings?

I want to transform the canvases into living beings, into visceral surfaces. They have to be fed from chance, traces of work, dirt, cuts and seams.

I liked the idea of confronting myself with these large white surfaces made to eat large meals. Eating on it, painting on it.

An unconventional and irregular canvas link to smells, noises, dialogues… It adds a cinematic feeling to it and the matter is for tactile sensations.

What I’m looking for in my work is for it to be the most full of life possible. I need to work on a large scale, so that painting becomes a physical act. That’s where I feel the more confident, the freer.

My work takes its source from everyday scenes. When I work, I usually listen to music. I try to stick to what I listen to by resuming the rhythm and the energy in the painting. My images feed on urban chaos, minor incidents in everyday life, neglected places, the beauty of marginal or neglected individuals, the atmosphere of Bret Easton Ellis’ novels… I love popular atmospheres, ex-voto imagery, food markets… I was inspired by Brixton’s multi-ethnic market in London, the giant food markets in Palermo (Sicily) and the Asian markets in Vancouver.

I typically do two or three paintings in 3 months. Even though under the final outcome must have been 10 other paintings, which I constantly erase and start all over again. Except from a few charcoal sketches, my research is done on the canvas itself, and all changes very quickly. Recently I’ve been looking a lot at a group of painters: Henry Taylor, Danny Fox, Todd Bienvenu…

It’s usually pretty messy, all sorts of materials and drips of paint everywhere. Canvases on the floor and on the walls. Dirty paintbrushes. Pigments.

Besides my studio at Chelsea College of Arts, I’ve had the chance to work on three sessions of intense work in South of France and in Sicily, where I worked in parking lots or abandoned buildings: large spaces helped me focus and develop my works on a large scale. I think it also impacts the type of work I do. 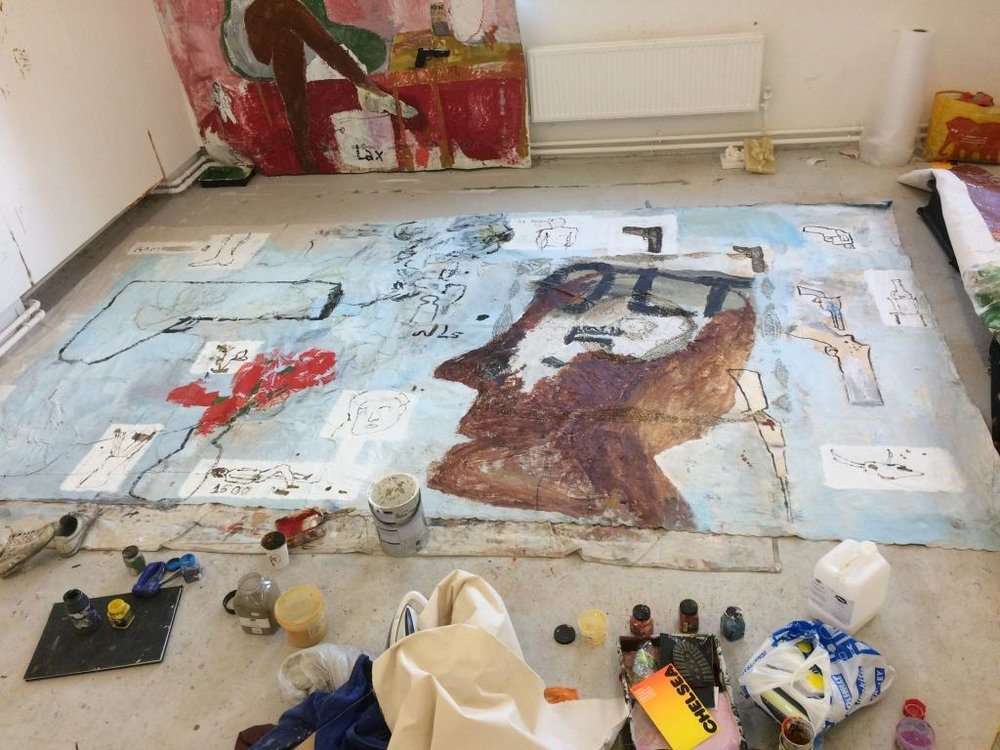 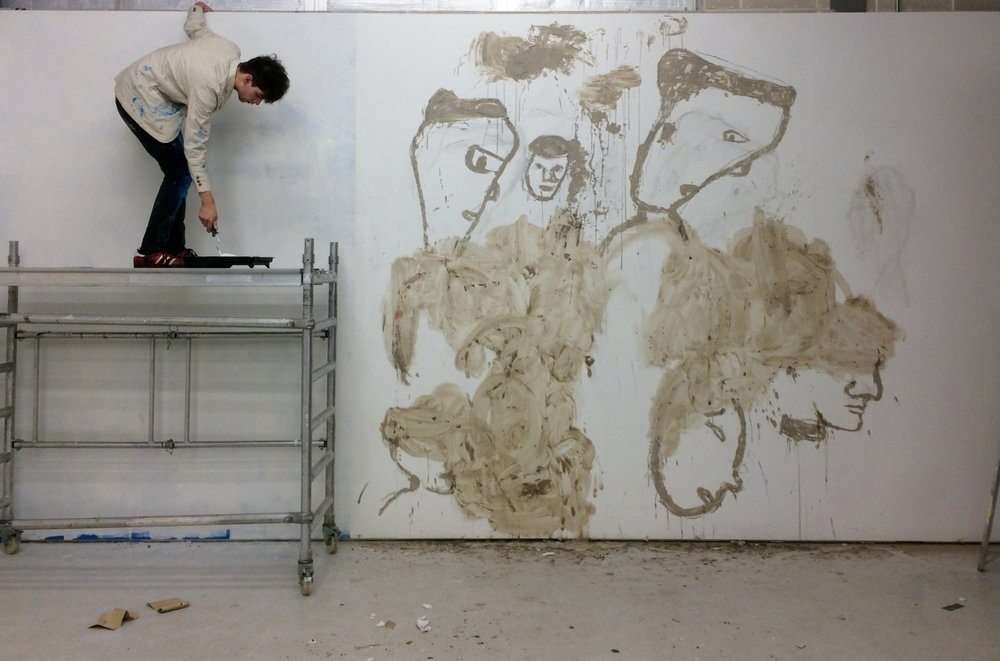 If you could meet anyone at all, and talk about anything with them over lunch or a drink, who would it be, and what would you want to chat about?

It would have to be Quentin Tarantino, to chat about filmmaking. I’m a huge fan of all of his films, which I think are all really “full and complete”: in the sense that everything is on point: the sense of narrative, the dialogue, the characters, color, rhythm, music, tragic, comic. I admire his sense of staying true to himself: he makes the movies that he would like to see.

After watching a lot of his interviews, I can say that he even speaks with rhythm! His atmospheres influenced my paintings quite a lot.

The pleasure to paint itself: enjoying doing what you do. The moment when you get in the “groove”, (in musical language, an indefinable state that refers to a magical moment where the music takes off), a sort of trance that happens when you are completely emerged by your work, as if there was nothing else in the world.

Being always unsure of what’s next. But that’s also the most exciting part about it.

I’ve just finished working on a series of 3 paintings. One of them is the biggest I’ve ever done: it’s 4,5 meters long! I just showed two of them at my degree show at Chelsea College of Arts in June. 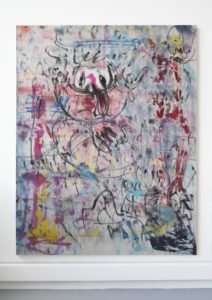 Joe Cheetham
Tell me about yourself! You're based currently in Edinburgh where you just…