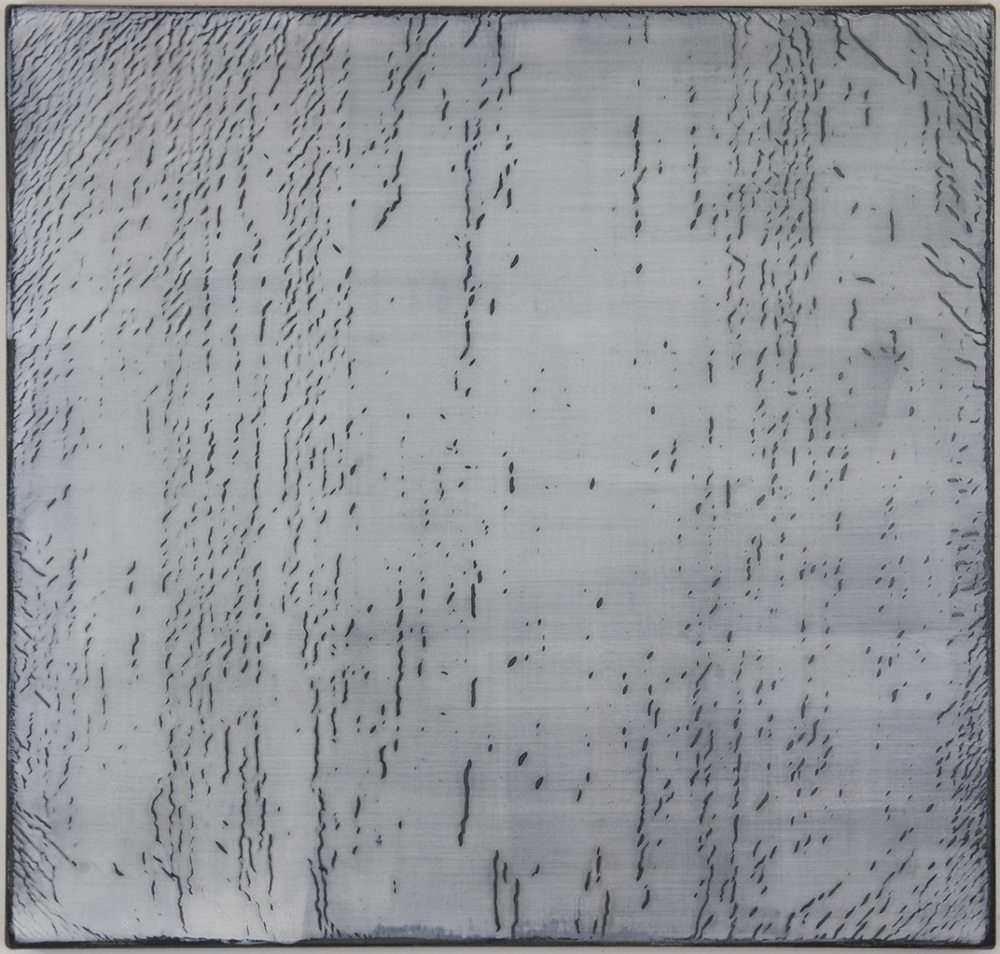 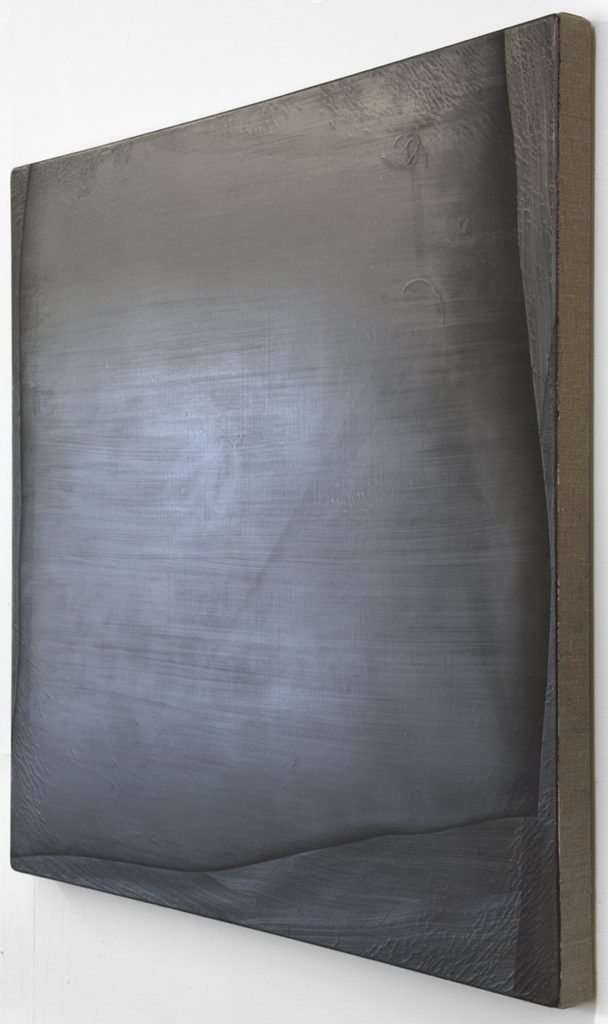 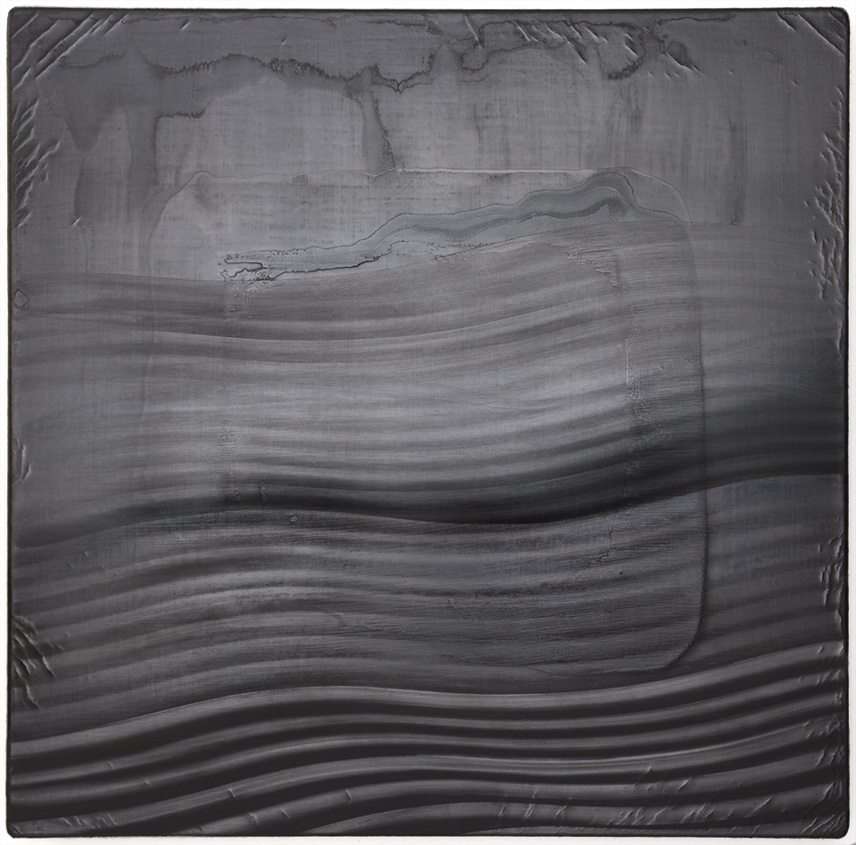 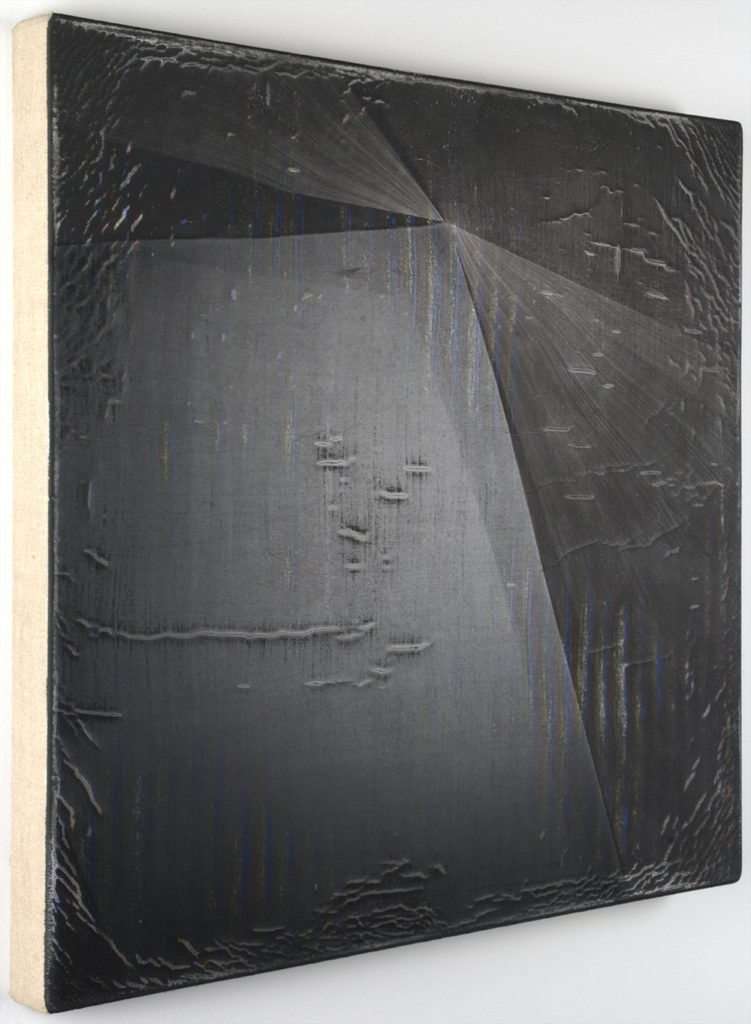 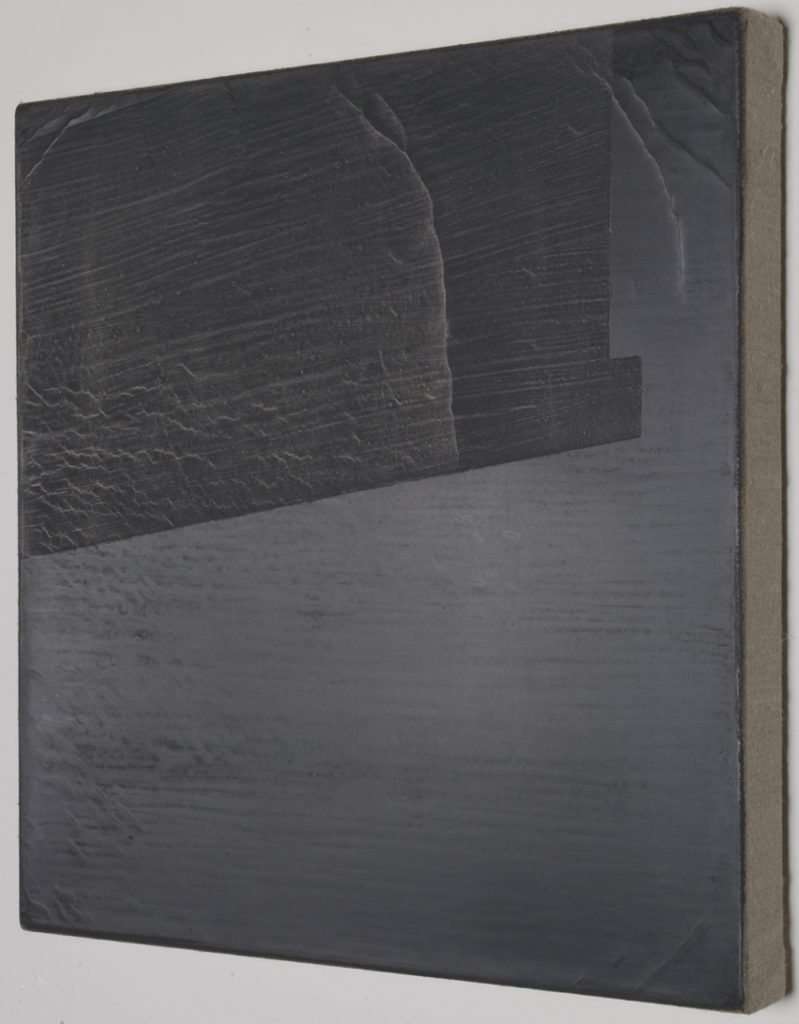 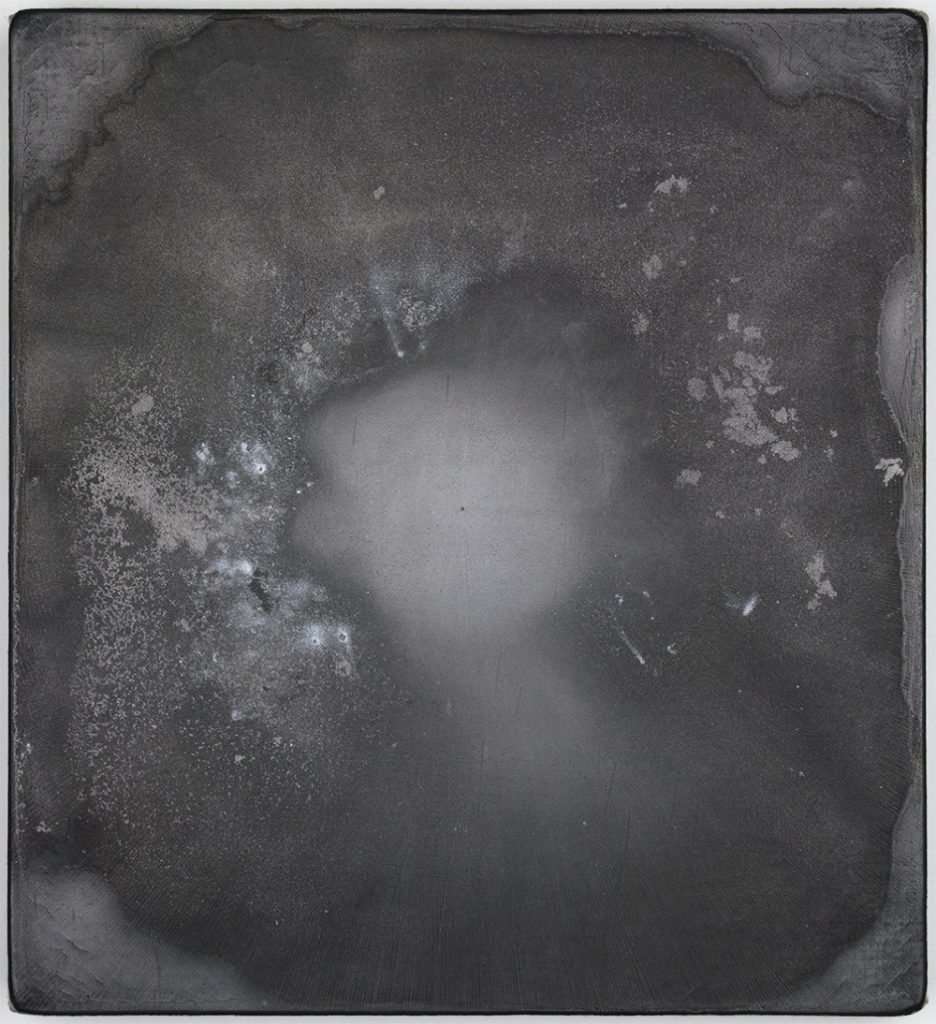 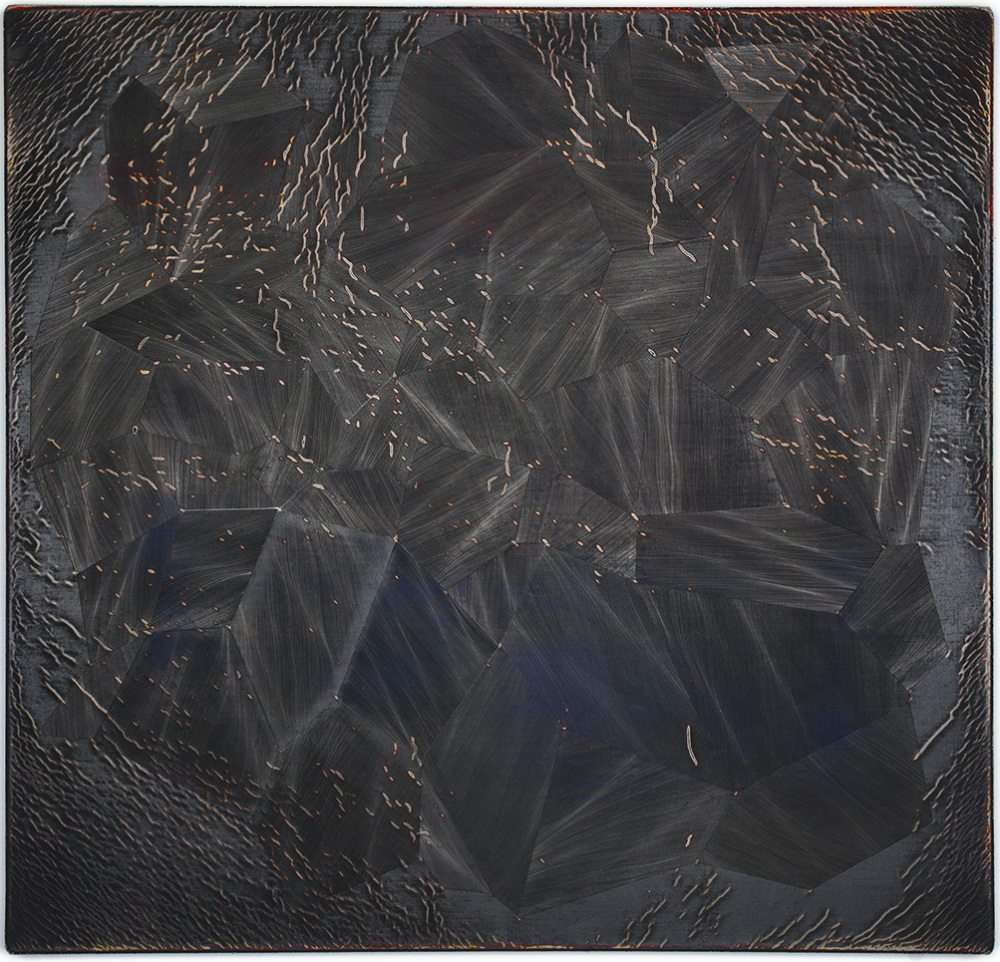 The gorgeous texture and sheen of these gorgeous surfaces, which are done in silverpoint, may at first appear quite minimal, but in fact they are delicately layered and detailed, playing with nuances of light and texture. M. Benjamin Herndon chats with me about the process of drawing and painting with the silverpoint method, studio routines, and handling criticism. More at the links below!

My name is M. Benjamin Herndon (the “M.” stands for Michael); I’m originally from Quincy, California, a small rural community in the Sierra Nevada.  Now I’m based in Providence, Rhode Island.

When did you know you wanted to make art?

I turned to art rather late, by most accounts: I had studied math and philosophy for several years in college before a breakdown of sorts, and started reading about art and making paintings when I was 23, after dropping out of Reed College in Portland.  I found making work and experimenting with materials to be cathartic and therapeutic, but I knew after a short while that I wanted more from art than just therapy.  I decided to commit myself to a serious pursuit, so I moved to New York to study at the School of Visual Arts, where I got my BFA in Fine Arts in 2012. Before going to grad school I worked for a couple of years at the late New York Central Art Supply, where I learned so much about materials and processes that it was a degree in itself.

You just earned an MFA from Rhode Island School of Design in 2016 — how has your practice developed or changed since then?

During most of my time at RISD I was working in a wider range of media than I am now — I made a lot of work with lead, paper, concrete, steel, most of which involved printmaking processes.  In my last semester there I started making paintings on linen, making my own paint from scratch, and using silverpoint, which is what I’ve been up to since then.  My process and use of these materials has gone through a good deal of experimentation and refinement since graduating.  Fewer deadlines for the work has been one of the biggest changes since then, and not having classes to go to every day has let my primary focus remain with the paintings.

What do you find to be the most challenging or eye-opening part of not being in the university setting anymore as an artist?

I still feel connected to academia, because I was asked to teach a printmaking class at RISD this past semester.  The change in role has been interesting though, from student to teacher.  I feel fortunate to have had the opportunity to get to know current students in various programs — so often in school you get a particular “slice” of community and then you move on and have no idea who’s in the program after you’re gone.

That said, I spend the majority of my time away from that community, in my studio.  I think, for better or worse, the biggest shift was going from an environment where there was all this attention placed on my work (such as critiques and meetings with faculty and my fellow students) to what is by contrast a critical vacuum, where it is now just me, the studio, and the work.  This change has been a really positive one, and I’m learning more and more to trust my instincts.  I think the academic environment places a great deal of emphasis (for good reason, probably) on explaining or justifying the decisions in your work, which is important to do be able to do, but for me that explication sometimes got in the way of the work unfolding on its own, for its own sake.

Your work emphasizes material interactions and subtle composition, which you describe in your artist statement as a “quiet conversation.” Can you elaborate on this?

Because I choose to paint on linen, the combination of materials that go into creating my surfaces eventually take on a life of their own that are outside of my control.  Each canvas will have upwards of a dozen coats of paint to build up the surface.  Each coat goes on hot, and has to dry for half a day before it’s ready to be sanded and coated again.  During these many days of surface preparation, the expansion and contraction of this material forms fissures, which themselves tell the story of how well (or poorly) the canvas is stretched and prepared from the beginning.  On the graphite paintings, these fissures catch the light differently than the surrounding ground, and give off a lustrous shimmer when seen in person.  Add to this the hundreds of lines of silverpoint that are drawn across the surface that alternately shine brilliantly or fade away entirely.  Lately I’ve been working on a series of paintings and works on paper that are composed of many migrating curved lines, which results in subtly undulating wave-like forms.

I like to think that the result has slowness to it, that a piece can’t be taken in at once, and to really see one of the paintings requires time, and often, the viewer’s movement in relation to light is needed to activate the surface.  This slowness runs counter to the way a lot of us consume images these days, which I find really interesting.  In person the work is considerably more subtle than the photographs online portray.

What is your process like? Do you do any research before starting? How much do you plan pieces in advance, if at all?

Most of the research is done in the process of making.  Compositional decisions in one piece often lead to further exploration or refinements in subsequent pieces.  Usually I’ll set out with an idea, but allow myself to be open to changing it, to stay flexible; rote execution is less interesting to me than allowing room for discovery.

What do you like most about the combination of methods and media you use, including silverpoint, graphite, pigment, marble dust, and gelatin? What challenges you the most about these?

Silverpoint has a long history for being a challenging drawing medium in itself, in that it can’t be erased like pencils can.  I love how subtle silverpoint can be on both light and dark grounds, and how it alternately disappears or captures and reflects light.  A field of graphite can take on the qualities of a dark mirror: it will go totally black at times or it will collect and reflect ambient light and color at other times.  I’m interested in how a surface that is restricted to a single tone, color, material can still be dynamic and even dramatic at times. Emulsifying graphite with marble dust and gelatin allows me to build up my surfaces, to eventually bury the weave of the canvas, and making this paint from scratch allows me to control certain elements: more marble in earlier layers for more body, less toward the end for a darker field.

The polished surface remains receptive to water, so I have control over which areas are reflective and those which are matte, which provide a more abrasive surface for the silverpoint drawing.  Learning all of this has been through trial, error, research, and accidental discovery.  I would say the considerable amount of time and labor that go into making paintings in this way is both the greatest challenge and at the same time is the greatest joy.  Each piece develops a lumbering momentum, like steering a large ship, and this slowness can either work out well or be a disappointment after weeks of work.

I’ve got a generous amount of space in an historic textile mill in Providence.  This area of the country was arguably the birthplace of the industrial revolution in America, and it was the textile industry that played the biggest role in that.  So I’ve got the high ceilings and beautiful wood floors of a 19th century industrial space.  I have a nice big table because both my painting and drawing happens flat.  I’m sharing the space with two friends, and, as it turns out, one was just recently featured on your blog, Haley Prochnow (it’s even a small world on the internet!). 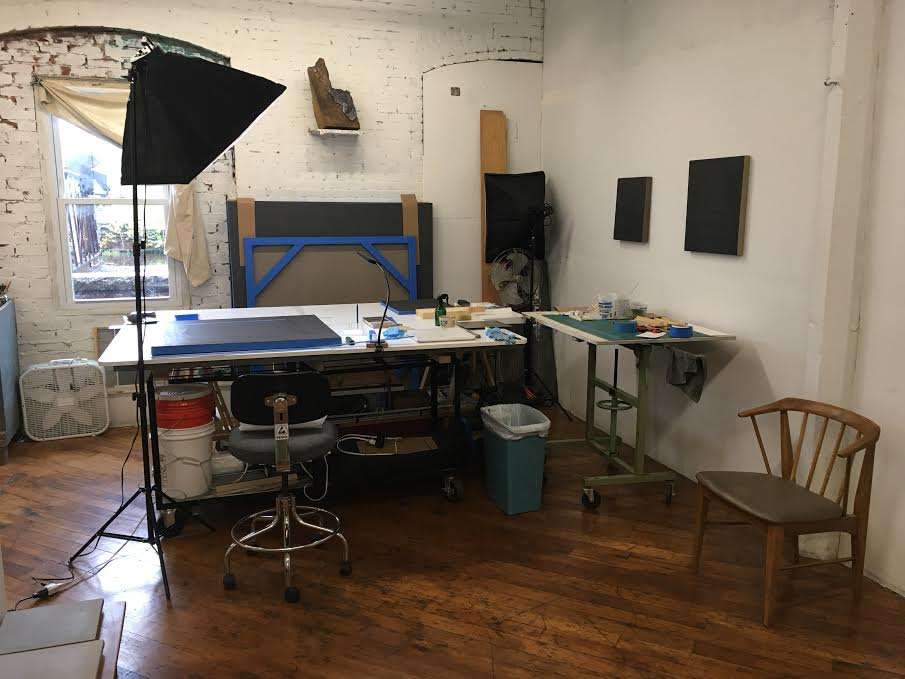 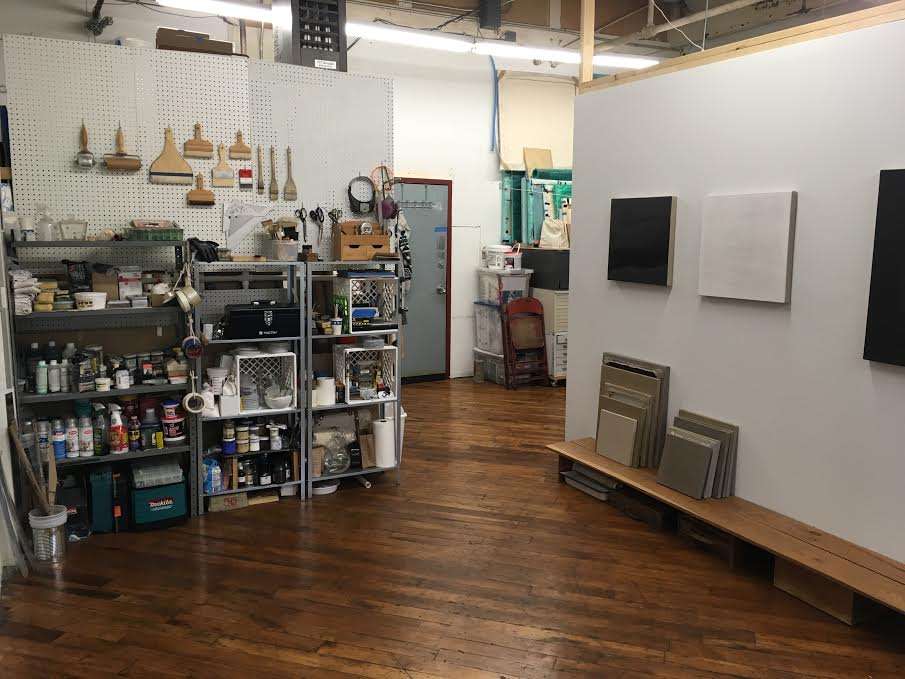 Do you have any rituals or routines in the studio to get you into the mode to make?

When I’m working up the grounds of my paintings, the first thing I do when I get to the studio is to soak my hake brushes in warm water (soaking swells the wood, which makes them shed fewer bristles).  Generally when I’m making decisions I’ll sit and listen to music (usually music that’s in the lineage of Arvo Part), and when I switch gears to the hours on end of silverpoint drawing, I’ll usually queue up a bunch of podcasts.  I’ve been wearing coveralls lately, so climbing into those has become part of my daily studio routine — it feels like putting on a uniform that says, ok, I’m here to work.

What do you think is the most challenging or daunting part of pursuing an artistic practice, whether creatively or professionally? What do you do to get through it?

I’ve had more than my share of anxious, sleepless nights worrying about both the creative and professional sides of my practice.  Being an artist is different from a lot of other jobs, because your work is such an intimate part of you, and there seems to be less of a divide between when you’re at work and when you’re not.  Criticism of your work can feel like criticism of your character.  I want to make meaningful work that is true to who I am as a person and as an artist, and I’d like for others to be able to get something meaningful and maybe even hopeful out of it.  Honestly, the most effective way I’ve found for me to put these anxieties aside is to just get to the studio and get busy.

What is the best advice you’ve received?

In my first semester at SVA when I moved to New York, I asked a young professor of mine how one goes about getting one’s work out into the world, showing with galleries, etc., and her answer was, “just focus on making the best work you can.”  Basically not to get ahead of myself, to let the work grow and mature, and then when the time is right, it will find its way out of the studio.

What do you need most, or value most, as an artist?

I have a couple of solo shows coming up in New York and Boston, so I’m busy making new, larger scale paintings for those.  And I’m preparing a bunch of smaller canvases for an upcoming residency in Vermont. 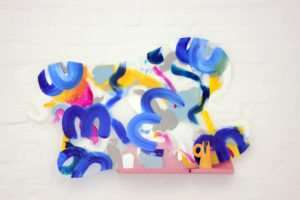 Katie Rose Johnston
First, can you introduce yourself? What first interested you in making art? My…