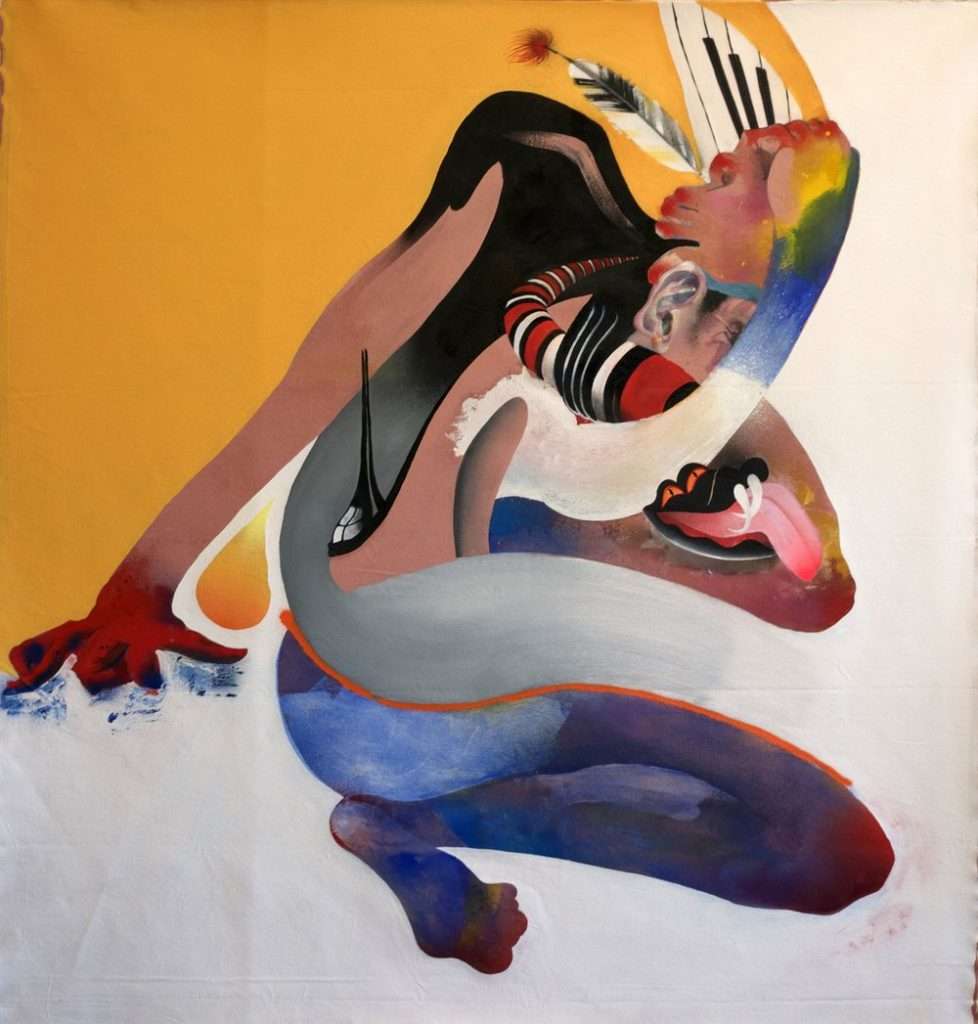 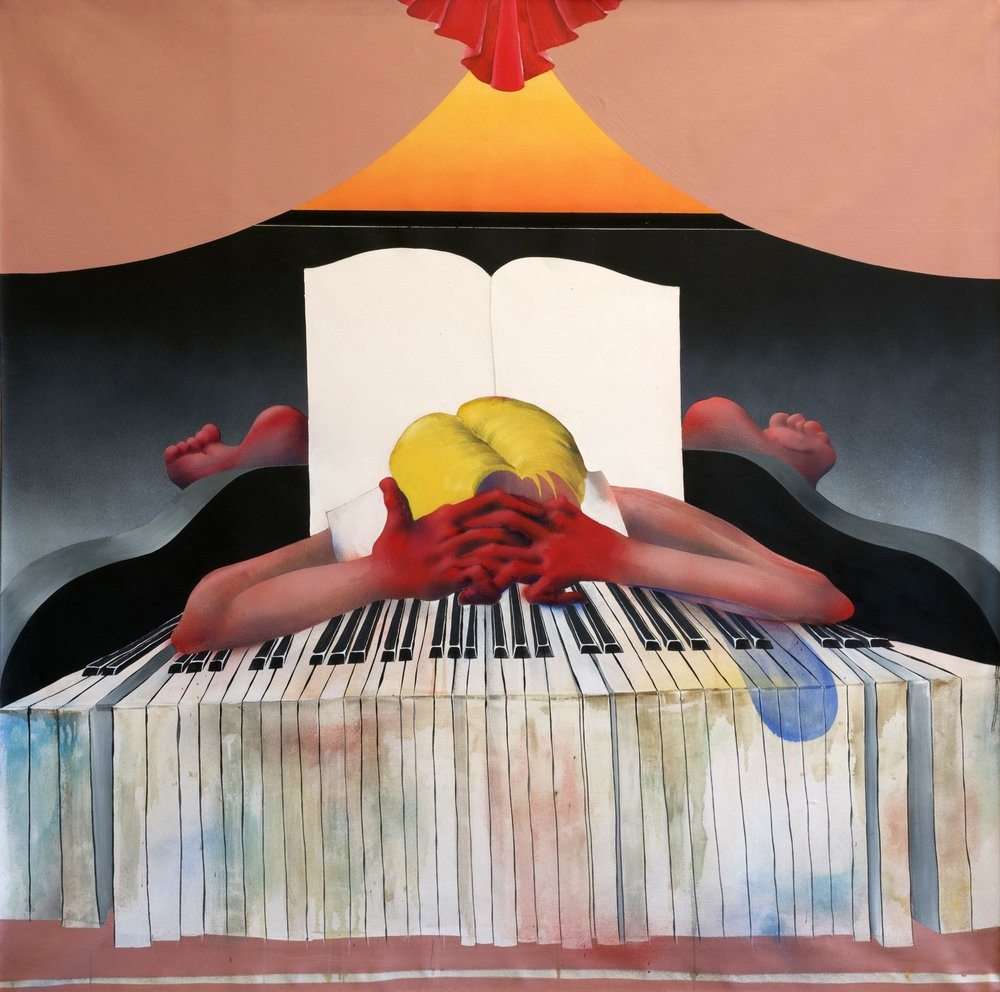 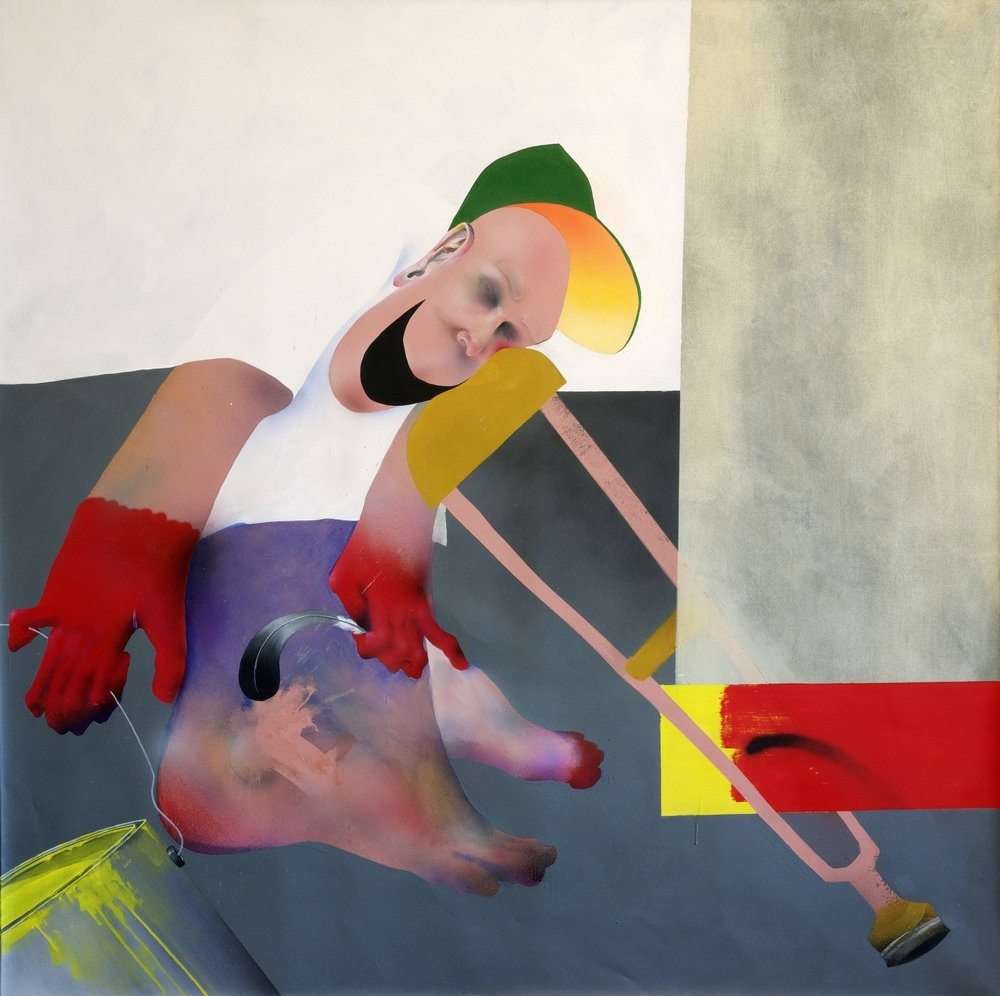 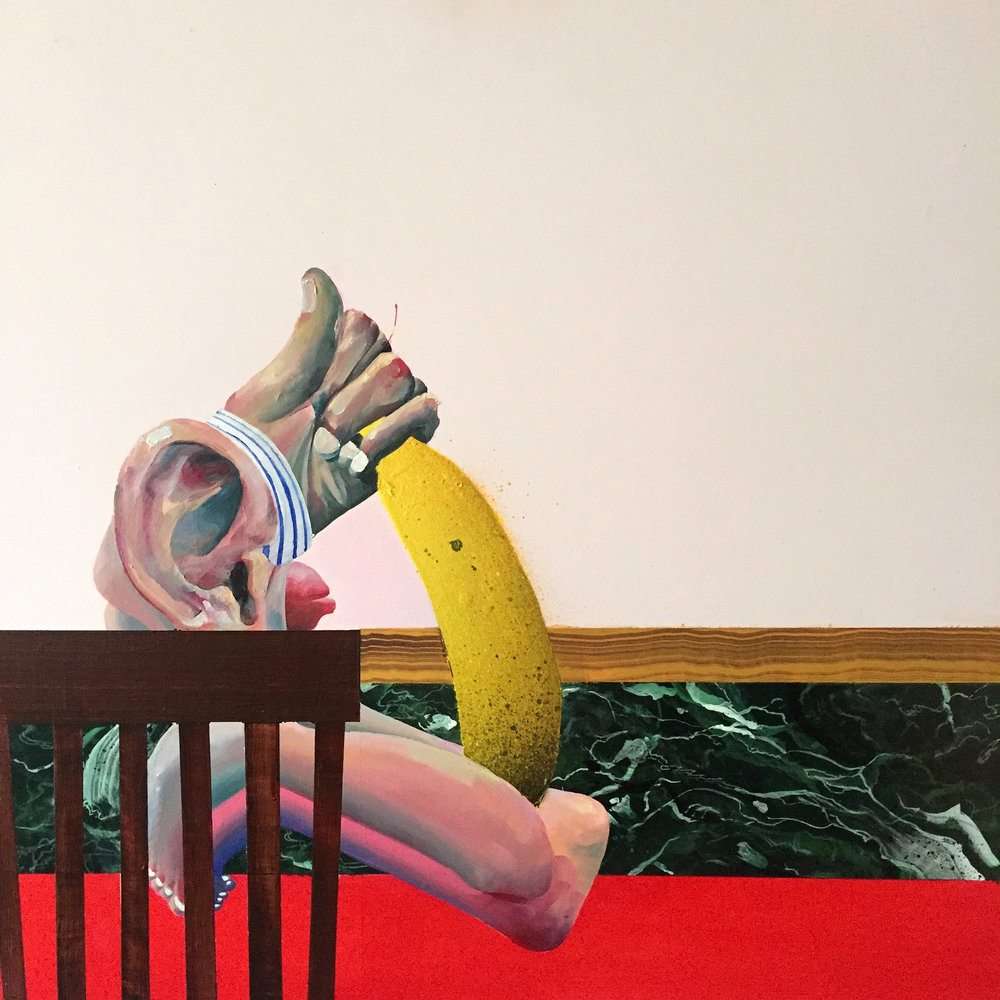 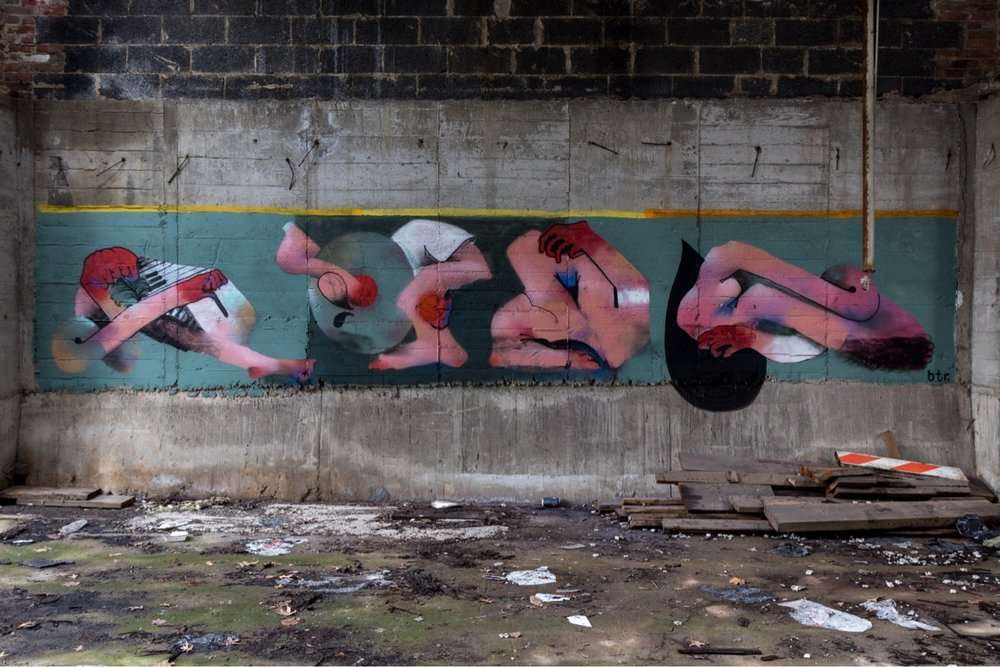 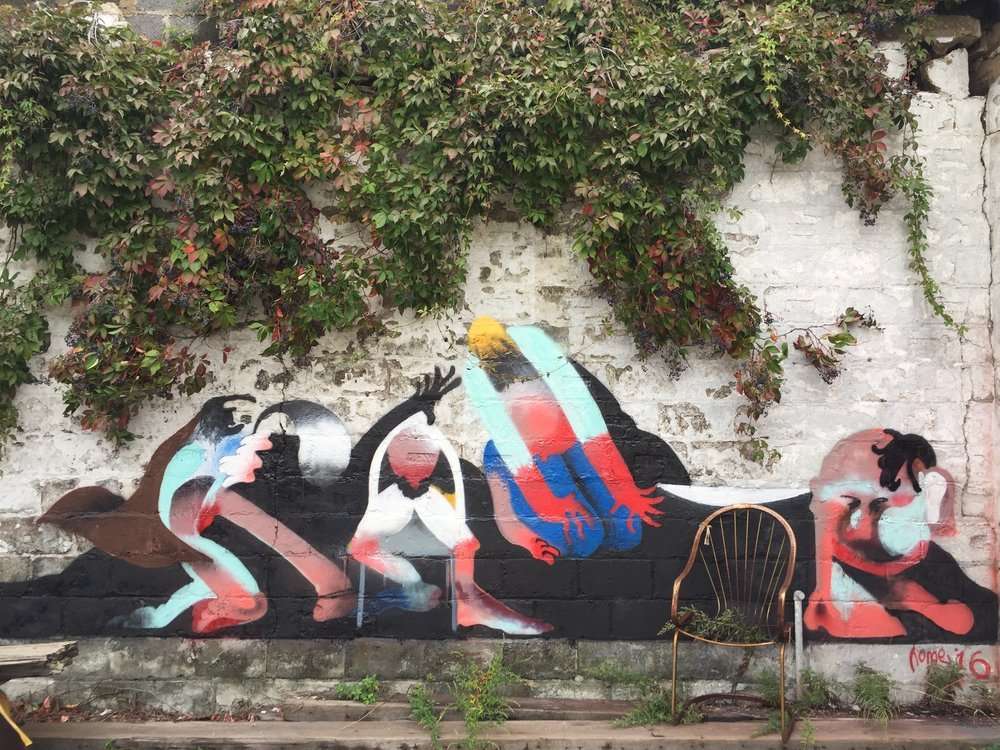 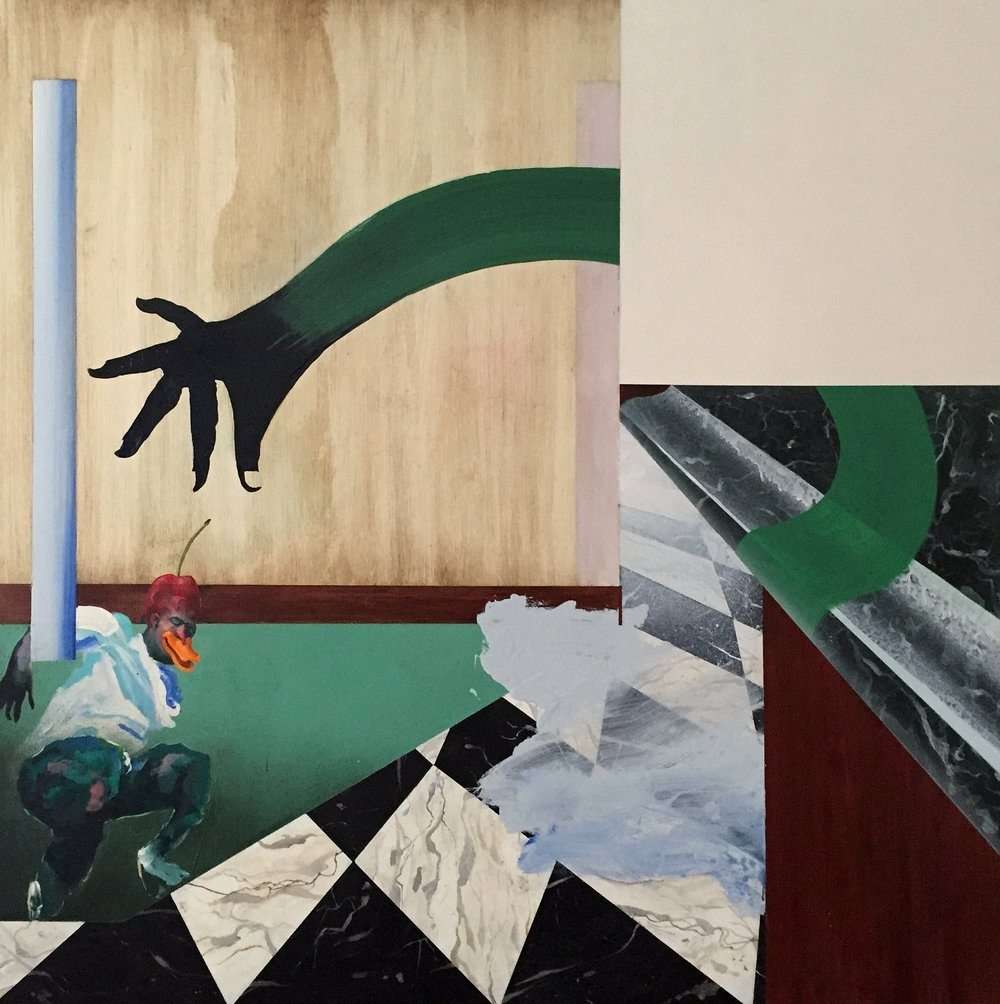 Definitely digging the unique style of Brooklyn-based painter Casey Bolding, whose surfaces span both concrete walls in public spaces as well as canvas and works on paper. I chat with him here about his mentors, how the moniker 28 Staples came about, and what compels him to continue exploring the various applications of his media.

First, tell me a little about yourself! Where are you based? What first interested you in making art?

My name is Casey Bolding I am currently living and working in Brooklyn, NY. My first interest in art was drawing naked ladies and hiding them from my parents in the first grade. I was eventually found out and progressed into drawing Nike swooshes and Air Jordan logos, which was probably my initial introduction to graffiti.

When I was 9 years old I got into a motorcycle accident with my Dad that resulted in internal bleeding from my liver being cut in half. After being opened up from my sternum to my groin the surgeons noticed I had a birth defect in my left kidney. The wreck ended up saving my life later on as I would have experienced kidney failure at a young age and would have ended up on dialysis. 28 Staples is the number of staples it took to close me back up.

What has your art education been like, whether formally or informally?

During high school I began to do graffiti. Mostly on freight trains. My art teachers encouraged me a lot to keep painting, and luckily I made a couple close friends who were really talented early on. My biggest teacher was one of these friends, actually, and is sort of like my older brother now. “Baer” has been to the right or left of me for almost all of the initial “breakthrough” paintings that gave me a sense I was actually creating something honest and of any substance. It’s important to have an open environment and not surround yourself completely with likeminded people. I attribute a great deal of my progression to the times we spent driving around for hours scouting for places to paint and talking about art.

You’ve done a lot of work in a graffiti or street art environment, but have also been translating your style onto canvas. Do you begin with outdoor paintings first, and then start experimenting with canvas, or the other way around? Do you feel that you work differently in either of those contexts, or that it influences do you make what you do?

Lately I’ve been using the graffiti more and more to do studies for the canvas paintings. For some reason there is less pressure painting on other people’s property rather than a brand new canvas. I try not to make too much of a delineation between the two because both environments bring out different, equally desirable qualities in my opinion. Both graffiti and street art have become really cliche and especially when translated onto canvas, so I have my work cut out for me.

Where do you get your ideas from? Do you do any sort of research?

I usually have no idea what I’m doing to begin with. It’s a frustrating place to come from each time, but I guess I must enjoy the torture. Research is sort of subliminal at this point since I’m constantly bombarded by imagery and information via the city and my cell phone. Taste is the only filter I have to make sense of what I think is significant and worth digesting.

What is your process like? Do you work intuitively, or plan in advance?

I try to keep away from having too much of a process because I fear predictability tremendously. It is a very intuitive dance, and the starting point is crucial to wether I believe the painting is worth continuing or not. My favorite part of making a painting, whether on canvas or outdoors, is maintaining the element of surprise as much as possible. If I know what the painting is going to look like when it’s done, I really can’t find a reason to do it at all.

How would you describe your studio or workspace?

This is the first year I’ve had a space to work out of, and it has made a monumental difference. I got the chance to work and share a space with two of my childhood heroes that came about in a classic “I LOVE NEW YORK” moment. Rime MSK and Askew MSK are two of the raddest individuals and most talented artists graffiti has to offer. Both have been able to translate their graffiti into a fine art domain successfully, and as a result I get a great deal of good advice and constructive criticism. The studio is chock full of spray paint and devices not intended to spray paint, that do spray paint. It’s a dream world for me really, and Joe’s (Rime) interest in sharing psychedelics perpetuates a thinner line between reality and that world. It’s good vibes in the studio, but everyone is here to produce first and foremost.

How would you describe “success?”

Success in painting, to me, is communicating a feeling in the most condensed way as possible. If I could play an instrument I doubt that I would paint. Sound seems to create a feeling much easier than painting so a successful painting should be somewhat of a song I suppose. Success in “art” is something I know nothing about.

What do you feel is the most challenging thing about pursuing art, either creatively or professionally?

I guess not becoming redundant is the biggest creative challenge, which I imagine only becomes more difficult the more “successful” you get. The professional challenge of that is having the charisma or tact to bring your audience along with the evolution of your paintings.

Right now I’m working on creating enough work to get a feel for what it is I’m actually doing. Im also really interested in showing the work to gauge where it stands in the current environment of art.

I wanna be a real boy. 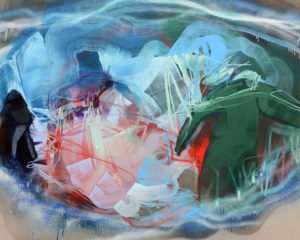 Dana Oldfather
First, tell me a little about yourself! Where are you based? What…