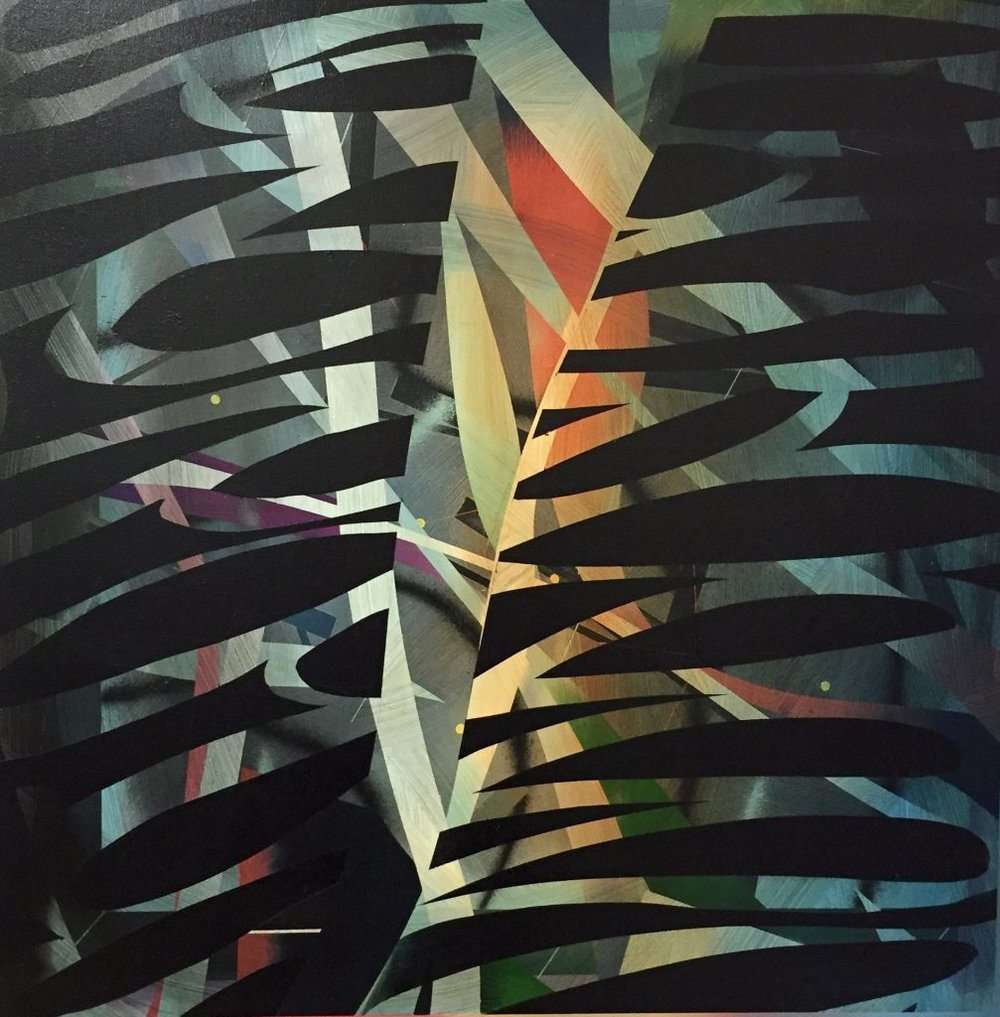 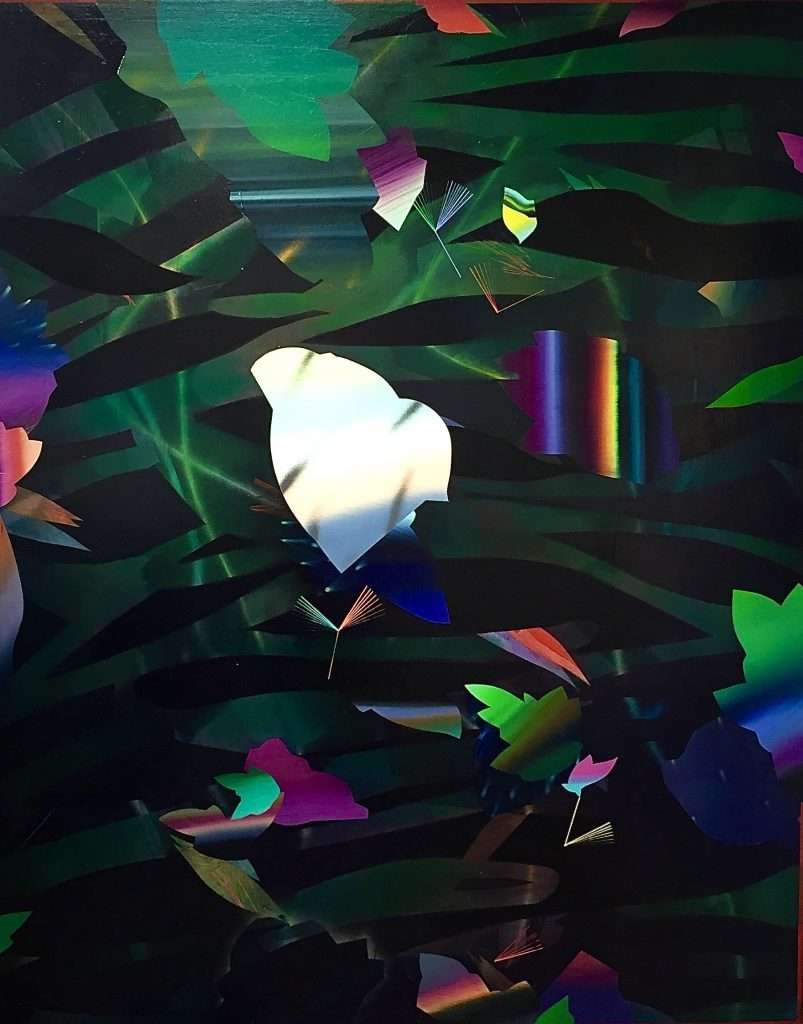 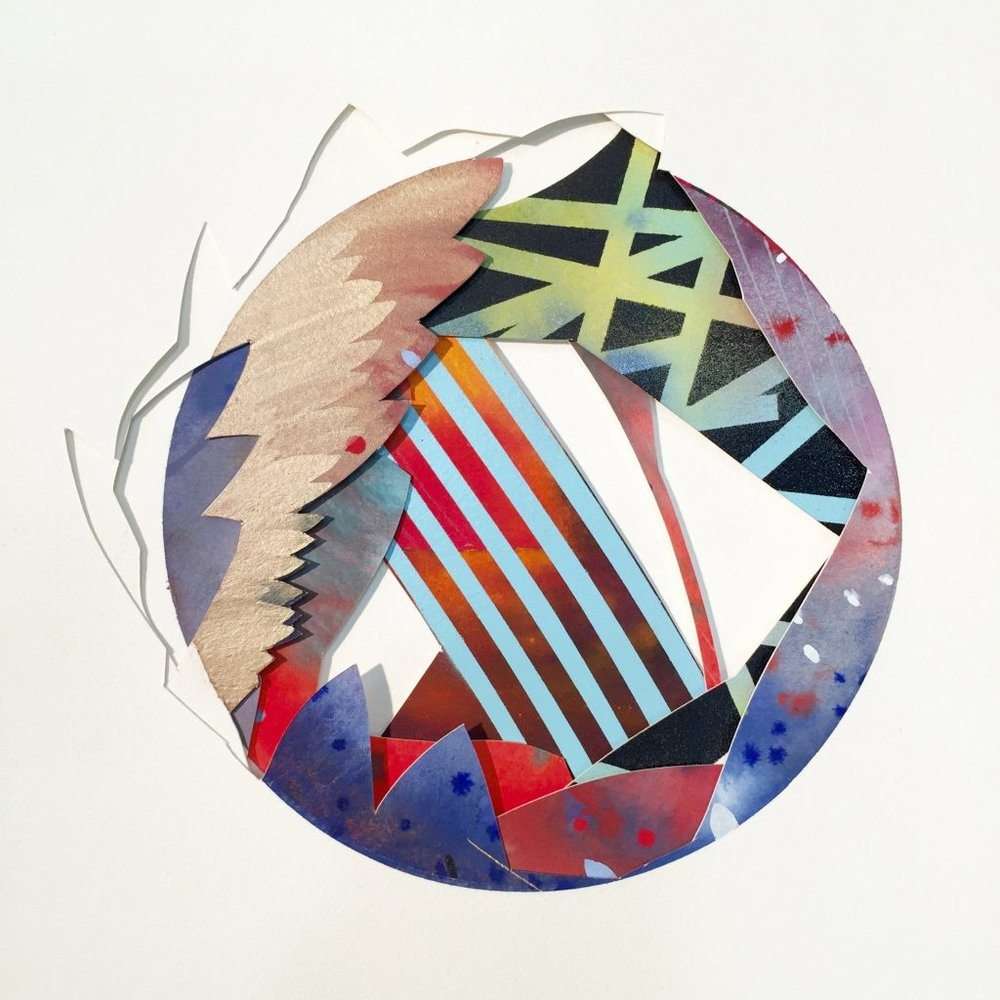 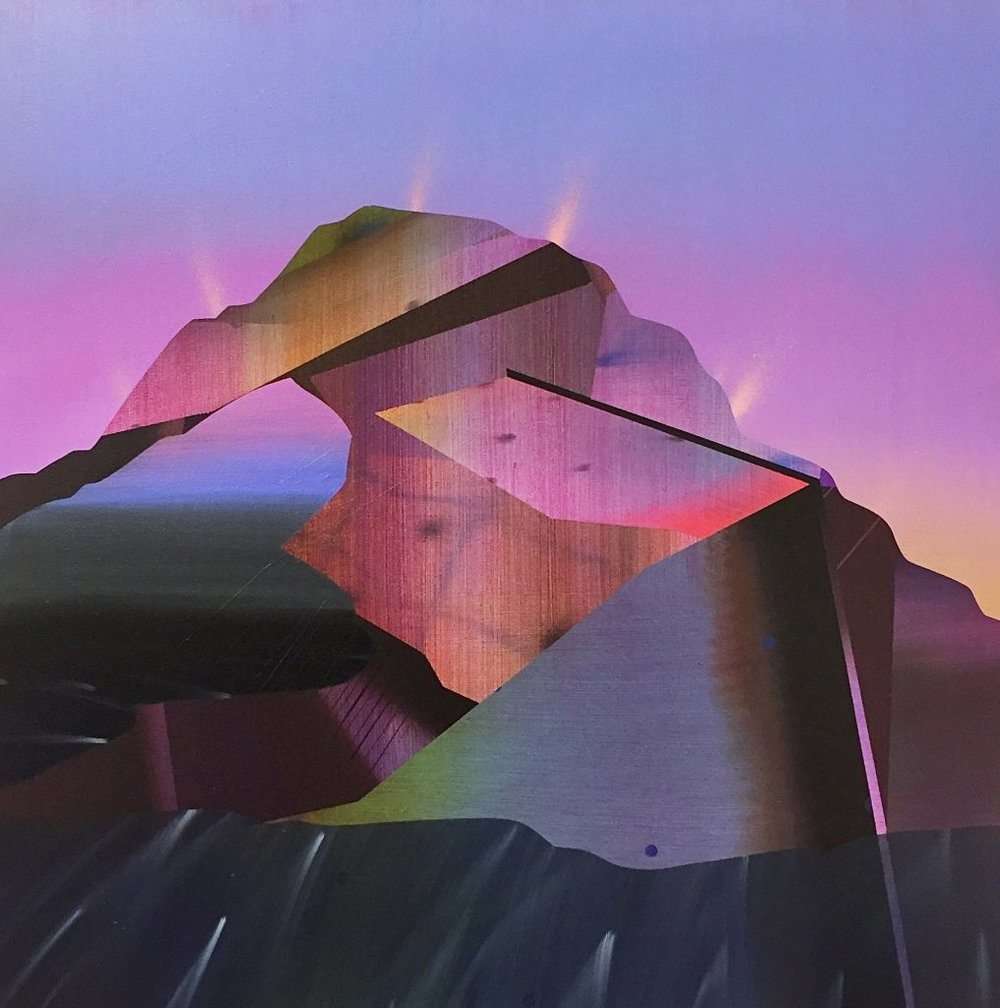 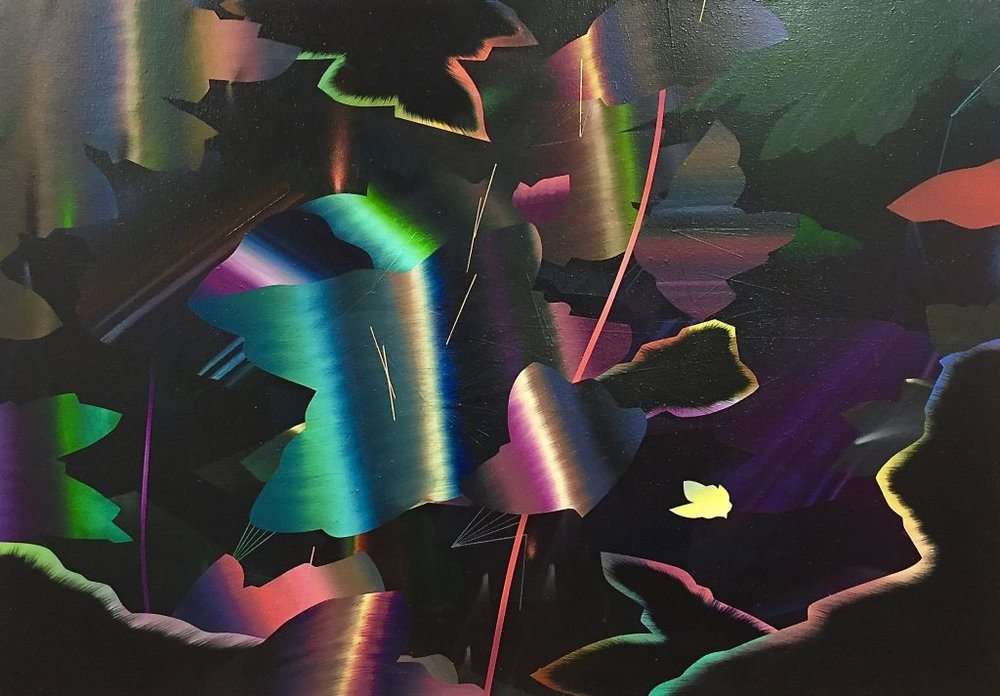 What really gets me about Eric Louie's colorful paintings are the nature of depth to the surfaces, which suggest layers, and occasionally even portals to other spaces, but all on an essentially flat plane. The color combinations -- bright pinks, gradated purple to green, the occasional emphasis on yellow... they really bring these home. More information after the interview can be found at the links below!

Tell me a bit more about yourself! You’re currently based in Vancouver? What has your art education been like (formally or informally), and what first interested you in painting?

Although I was born in Boston, I grew up in both Winnipeg and Calgary before moving to Vancouver in 2011 where I am now based.  As a child I took lessons at the Winnipeg Art Gallery and later when we moved to Calgary at the Alberta College of Art. Those were some really fun and formative years for me being exposed to so many ideas at a young age. I tried my hand at Business Management School at the University of Calgary in the mid 90’s but later I found myself yearning to go back into art. I switched to the Alberta College of Art and Design and ended up graduating in 2002. Those years spent at ACAD affirmed that painting was my preferred mode of expression.

How long have you been working full time as an artist?

I’ve been working full time as artist since I graduated but was focused on figurative work and social realism up until six years ago. I really wanted to build my own world from the ground up which was a rebirth in a sense.

Your paintings are abstract, influenced by ideas relating to architecture and nature. Can you tell me some more about your work?

I love making intimate spaces where the elements play and refer to some sense of nature or perhaps architecture. I’ve been building a vernacular of varying shapes and forms where I can now use them in any particular order to create whatever scenario I want.  It has taken some time and many varying bodies of work to come up with each of these recurring characters in my paintings.  At first they were mostly gestural and organic forms and have migrated into something more angular and hardedge.  I want each piece to be unique and fun with each subsequent painting pushing off the last. Certainly I’m obsessed with each painting taking me somewhere new which makes it hard to stay still at times… My father is a microbiologist and I suppose a lot of my work speaks to that influence being in his lab growing up looking under the microscope.  There has always been some semblance of worlds filled  with man made elements interjecting from all angles.

What is your process like for beginning a piece? Do you plan ahead or allow the painting to guide you?

I usually have some kind of mental picture of where I want to start but I let the work guide me. Nothing is really precious in the painting until it is finished so sometimes i’ll cover up months of work just to get it right in my head. I tend to take photos as the painting grows and draw with my phone apps to figure major elements without laying anything down. I’m not huge on sketching and I love not knowing what is coming next. I guess as painters we make problems for ourselves and get addicted to solving them. The thrill of the chase in effect.

I share a large studio with several others in an arts building in East Vancouver. It has been a great space to work in the past four years. 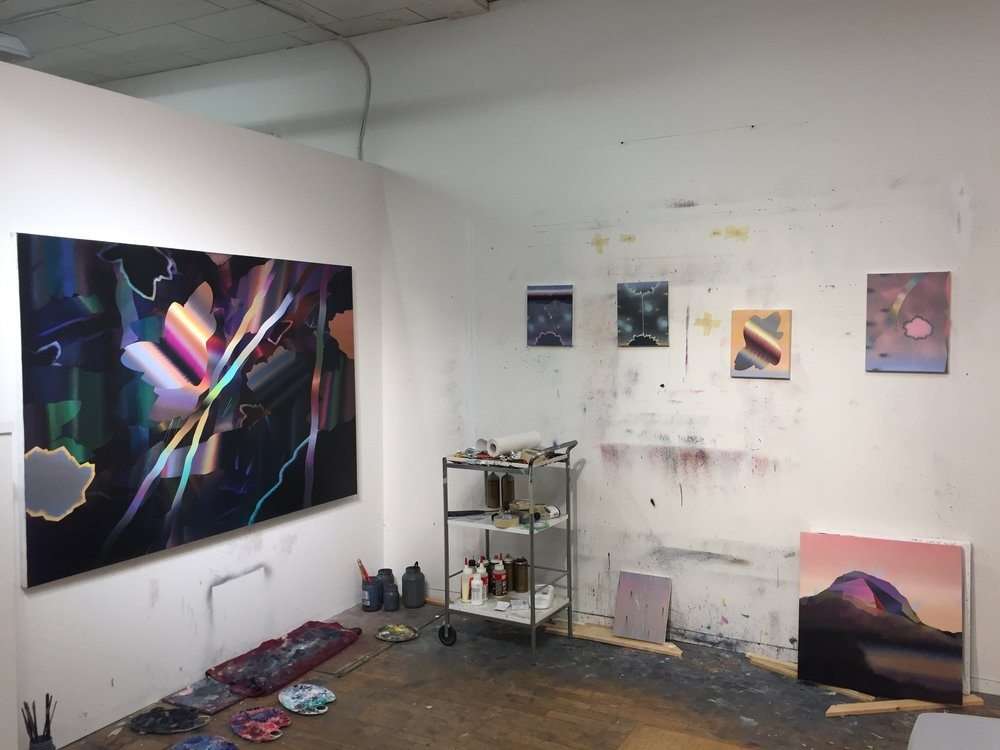 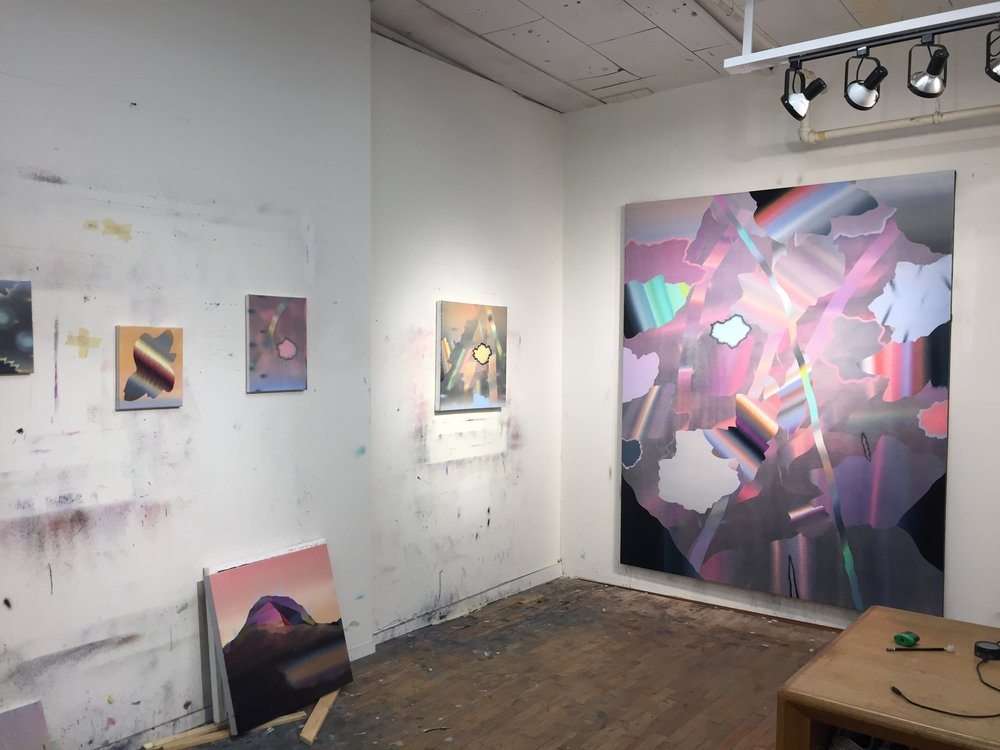 Do you have any particularly significant influences, or mentors?

My aunt was an art collector so every time I went to visit her I would see so many great paintings by Mary Pratt and David Hockney for example. She collected some pieces by Darren Waterston whom I’ve always found fascinating and has influenced my work. In 2002 we did a school trip to NYC and when I saw Gerhard Richter’s retrospective he showed me how versatile  an artist can be in scope and style. That show changed me in a lot of ways for the better.

Have you received any advice over time that you find yourself revisiting often?

My friend Bradley Harms always told me this journey is a marathon and not a race. This is so true.

What do you consider to be the most challenging or difficult aspect of pursuing art seriously?

There are many factors playing against you as a full time artist…Besides keeping your head above water financially and not knowing where your next meal is coming. It is probably all the uncertainty of ones’ career which has no direct path per se. At the same time there has always been for me at least this blind faith which keeps me going and is exciting as well. That thrill of being on the edge and risking it all the time makes me feel like I lived and loved.

What is the most rewarding part? What drives you to do what you do?

The most rewarding parts to me are all the small discoveries and victories in my paintings which I try to share. Exhibitions are damn exciting as well, such a high!

Do you have any upcoming exhibitions or other projects you’re working on?

Tentatively working on a show here in Vancouver for the spring tbd, and I have a solo show in Montreal October 2017 at Galerie D’este. 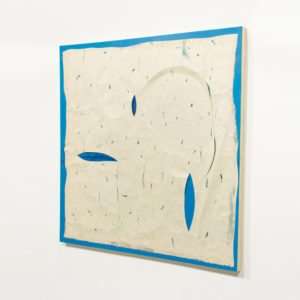 Ivan David Ng
First, tell me a bit more about yourself! What first interested you…