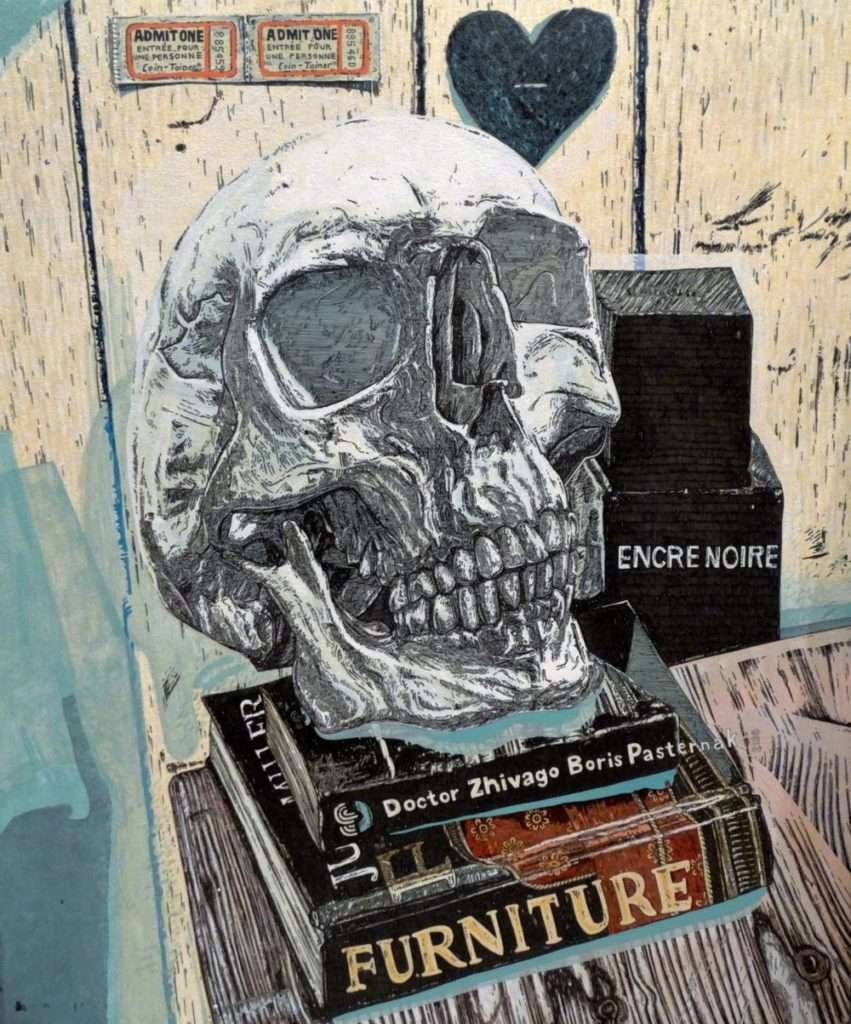 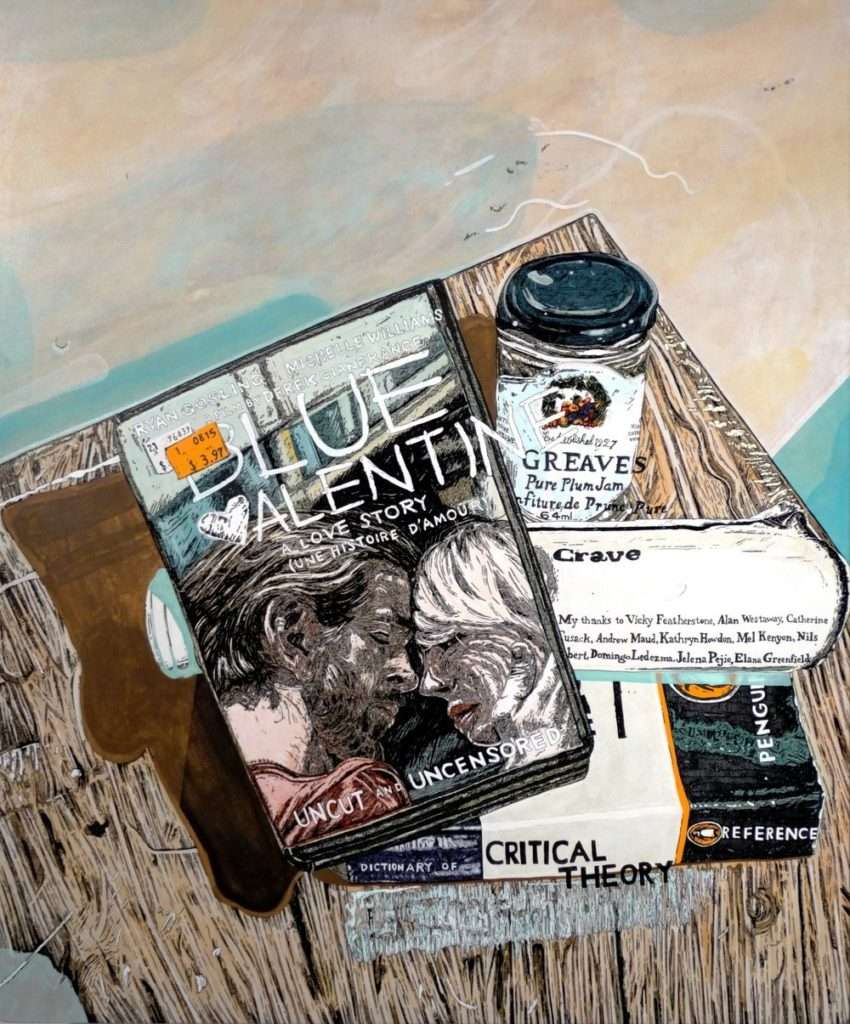 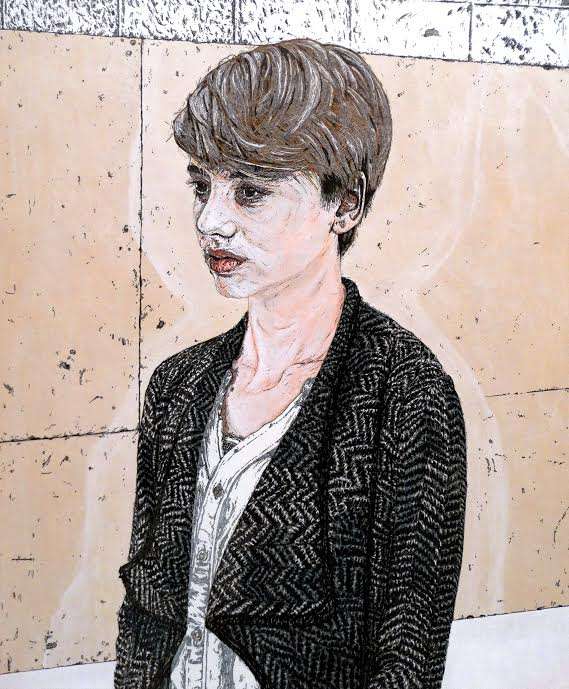 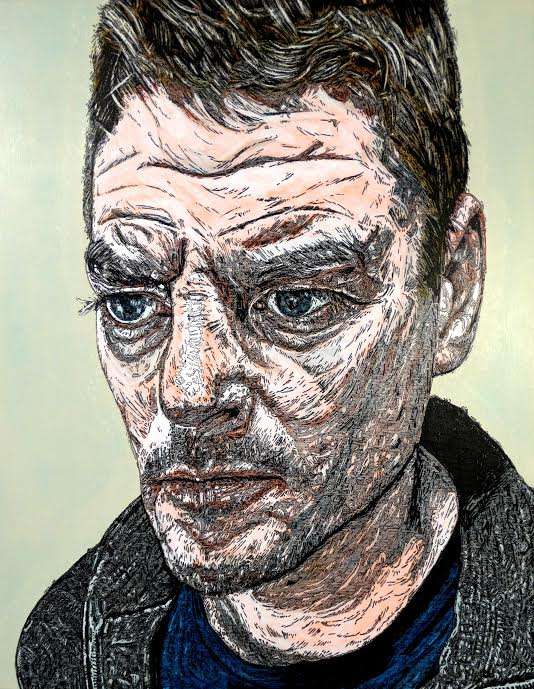 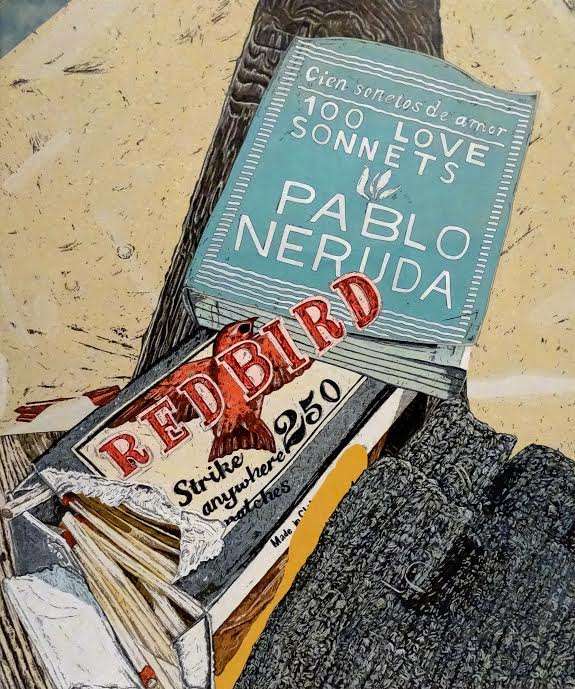 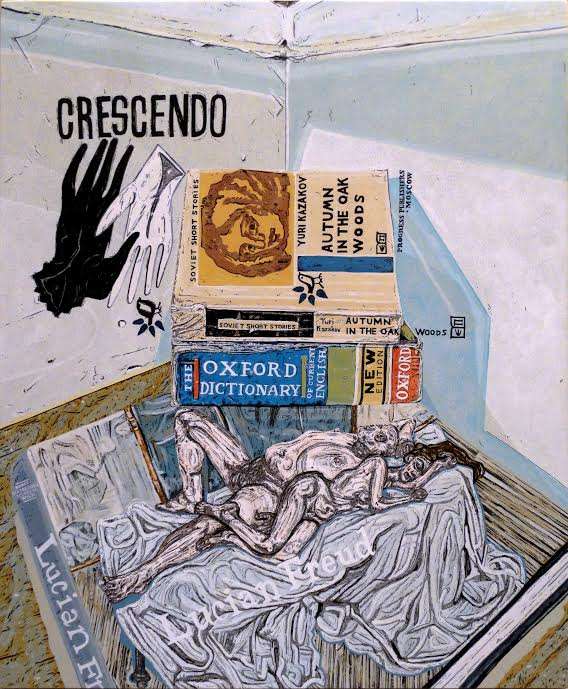 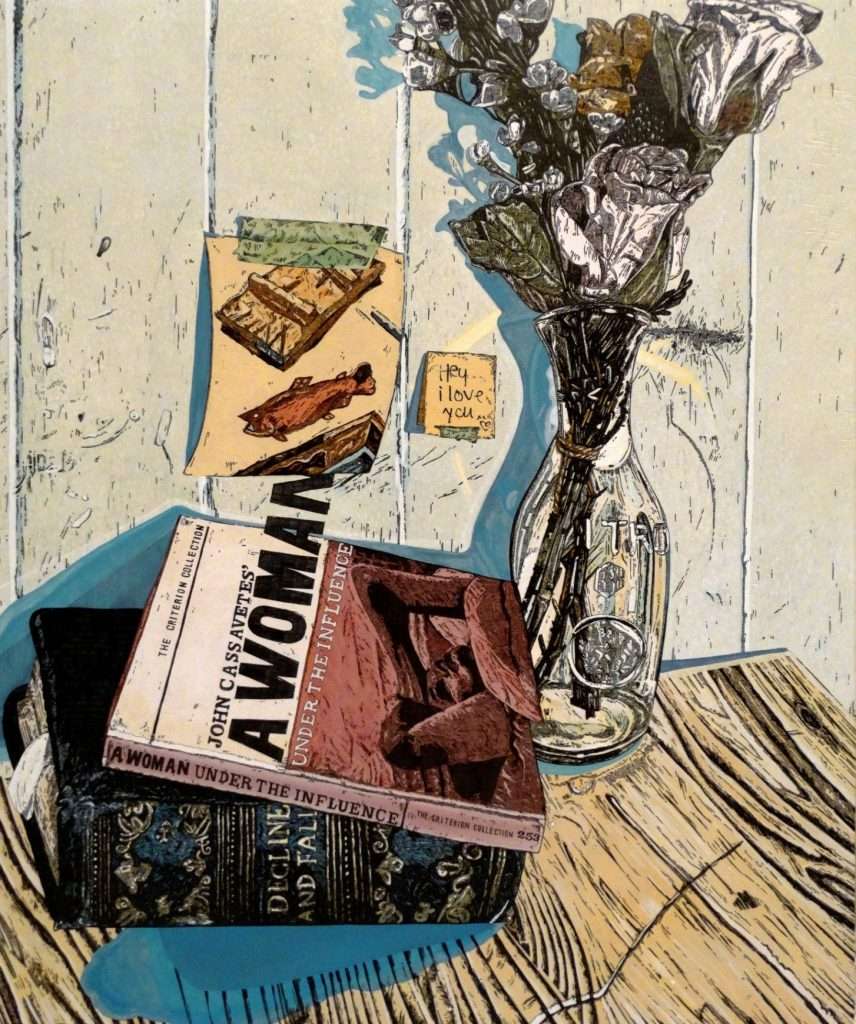 Canadian artist Andrew James McKay's stunning portraits and still lifes seem to vibrate, the patterns and words overlapping and shaking free of the rules of perspective. It's the perspective itself that gives these images life, stretched or angled in a certain way to make the objects or figures in them seem to come away from the surfaces they are placed on or in front of. Interested in addressing theoretical problems related to painting, he is currently working with a group of artists working on a collaborative project related to painting and labor systems, and turns an eye toward the concept of production.

First, can you tell me a bit about yourself? Where are you from, and where are you based now?

I originally started working in Ottawa, Ontario –which happened to be the place of my birth–though I’d moved around quite a bit as a younger person and had only ended up back there some time later because I was attending the University of Ottawa. I was studying sociology and history, not art. I’d gone to see my family late one Christmas during that period (they lived some distance from Ottawa), and spent the holiday proper making a large drawing with a friend in a similar circumstance. After returning to Ottawa, my friend handed me several hundred dollars and said he’d sold the drawing to a travelling collector shortly after we’d finished it. That drawing ended up in the UK I think. I decided immediately to quit school despite having done well to that point, at least in the courses which appeared relevant. I start painting full-time shortly thereafter.

Did you attend university/art school? Or do you have any significant mentors or influences?

Later, I found myself in Kitchener, south of Toronto, Ontario. I was painting all the time, often 16 or more hours a day when I could, and had an interest in returning to school. Mostly the decision to study art was to have access to a printshop because I wanted to expand into etching. I did a year-and-a-half at the University of Waterloo and then made an opportunity to transfer to Vancouver, BC to attend Emily Carr University of Art + Design. That’s where I study now, and I maintain a studio in a Vancouver neighbourhood. Although I’m largely self-taught at this point having worked independently for a decade before attending art school, there have been some professors I’ve really enjoyed working alongside. I’d taken a drawing class with Lisa Birke at the University of Waterloo, and I found her approach to teaching to be really something–it was a very free and compelling and rigorous atmosphere. I’d a similar experience with Madeleine Sauvé at Emily Carr, although she has recently retired from teaching there.

Initially, it was the plain interest in making images–just the pleasure of drawing and painting. Then it moved into a greater interest in, as well as a way of interacting with what was around me. Recently, I’ve been curious about images linguistically-speaking: what it is to make an image, and what it is to see or read that image. The painting itself is of paramount importance, but art is a way of attempting to perceive of things that don’t have words to format or describe them. This value is a close runner-up.

Within the last few years, first with your Peonies series and now with Agnosia, you’ve gravitated toward still lifes, but with your own spin on them. What do you like most about this style, or your chosen media?

The Peony Studies works deal with my curiosity with craft and the history of craft. The peony was something that I felt could be handily used for working in conjunction with the artists and craftspeople I knew in Kitchener–it had a lot of potential for visual interpretation. The still lifes were of course a way of tackling this in painting, but we also collaboratively produced pottery, sculpture, an animation device, clothing items, a wallpaper, and even pastries and a drink made from local, organic peonies which were served at the reception. I also was interested in the peony because a woman I think highly of  fancied the peony still lifes I’d been doing prior to thinking of the show as a cohesive unit, so I felt encouraged to explore this kind of painting in a way. In any case, she ultimately wasn’t able to see the show but the exhibition was otherwise well-received and we sold a lot of work in a place where this was generally uncommon. There is a book I published about that work, the digital copy of which is online here.

The Agnosia works certainly focus more on the still life. I had started to think of the objects around us in our lives, and the impressions they give us because of what they are and how they come to possess meanings not entirely related to their form or use. I tried to use the still life format to show the sense of these things as they are interacted with in a less-than direct way. I thought it was more important to try and tell of a feeling about life–the condition of life appearing surprising or unrecognizable–though I’m not sure how successful this was. I’m still considering the matter. Maybe they didn’t get all the way there, but that’s the point. The more time you spend with the paintings, the more they become their own thing unrelated to their status as paintings, not unlike the objects they depict. You stop recognizing the paintings and objects in a way and they both become as foreign as anything. I’m very surprised to wake up each morning and be struck for the rest of the day by the foreign character of life in general. The still life here becomes a genre of losing touch.

How do you get started on a piece? Can you explain a bit about what your process is like?

An idea generally brews for a while–I’ll be interacting with something or someone for a time. Then I’ll take some photographs and use these to make a simple grisaille framework, though this is admittedly not a ‘classic’ grisaille. I’ll add layers of acrylic to build up a smooth finish of over-saturated colour on a wood panel, thinking not only of what’s in the photograph, but also the numerous other things I know or have feelings about related to the thing or person I am painting. When the colours have been laid on, I use a 4×0|.18 rapidograph to integrate a matrix of linework to create tone and imply individual detail. I came to this synthesis of painting and drawing because being self-taught, it was imperative to learn how to paint as well as draw and this was a way of doing both simultaneously. I guess some people have issues with painting from photos, but it’s not a direct copying by any means, and it’s a gormless argument  to say of the use of photographs shortchanges the process. You have to think about other things than just what you see while painting from life, too, it’s not just copying from life is it?

It’s fairly minimal. I tend to move a lot, and so I keep it lean. Relocating to Vancouver without much money, I decided to buy a big desk upon which to work before buying a bed even; I slept in a chair for 12 weeks until I found the money to buy a bed. The lighting isn’t the best in my current studio, but I work by a bright, bare bulb. Being a small workspace, it’s easy to keep clean and organized. I maintain it explicitly as a working space, rather than a ‘presentation space’ as you see in some university masters programmes and increasingly in social media posts. You sometimes look at those spaces have to think: ‘No one would actually work there, it looks like the arts-equivalent of a staged living room in an IKEA catalogue.’ You know, a potted monstera deliciosa here and some seemingly manicured mess of paint there–very ‘artistic’ haha. It would be different were that space used for frequent open-studios–this entails for benefit of the visitor the presentation of a kind a fantasy of the workspace, but I prefer a measure of privacy. Increasingly, I keep my working location off-books as much as possible.

What is a piece of advice you’ve picked up along the way that has stuck with you?

I’m not sure if it’s a case of ‘advice’ per se, but rather I find it encouraging to have around me people for whom a… probably a ‘tenacity’ for living life is the best way of putting it. To have an unrelenting attitude towards life is more useful–to be confronted with examples of this as a way of being–rather than what people might posit as advice. That kind of advice is often so specific to the person giving it and his or her particular experience that it just can’t be applied to one’s own life or approach to the work. People who work and especially live with a certain mania whether they like it or not I find I like very much.

What do you find most challenging about working as an artist? what do you feel that you need most?

There’s always a lack of time it seems–not enough hours in the day, or too many things I’d like to do.

On the flip side of that, what is the most rewarding aspect of doing what you do?

It’s most rewarding to be able to spend your life the way you want to, even if this means a lack of money, loneliness sometimes, and so on. These are pretty negligible issues though, and those conditions are not the sole property of people who would spend their lives making art.

I’m working on a collaborative project, a look at painting in relation to labour. I’m still working on this and hope to show it in late 2017. I’ve not yet decided what to do with the Agnosia works, but hope to show them before too long. I’m still reviewing the available exhibition spaces and galleries here in Vancouver. 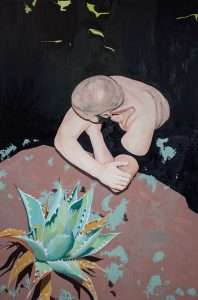 Magdalena Gluszak
Just to start out with, tell me a bit about yourself! Where…