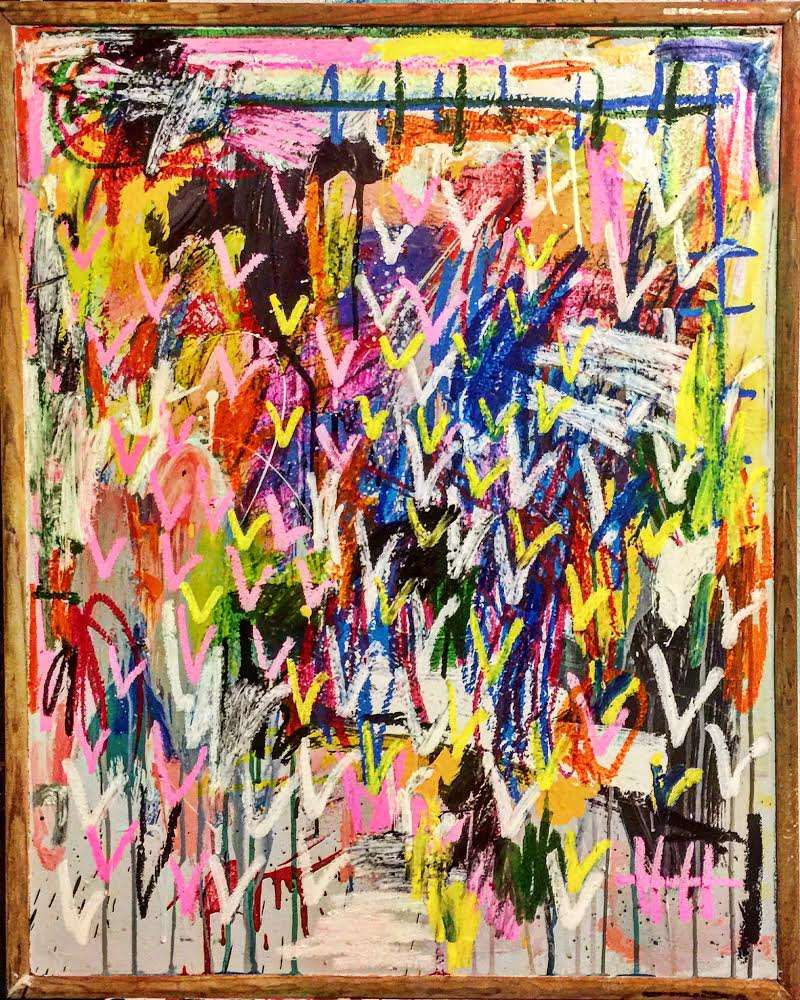 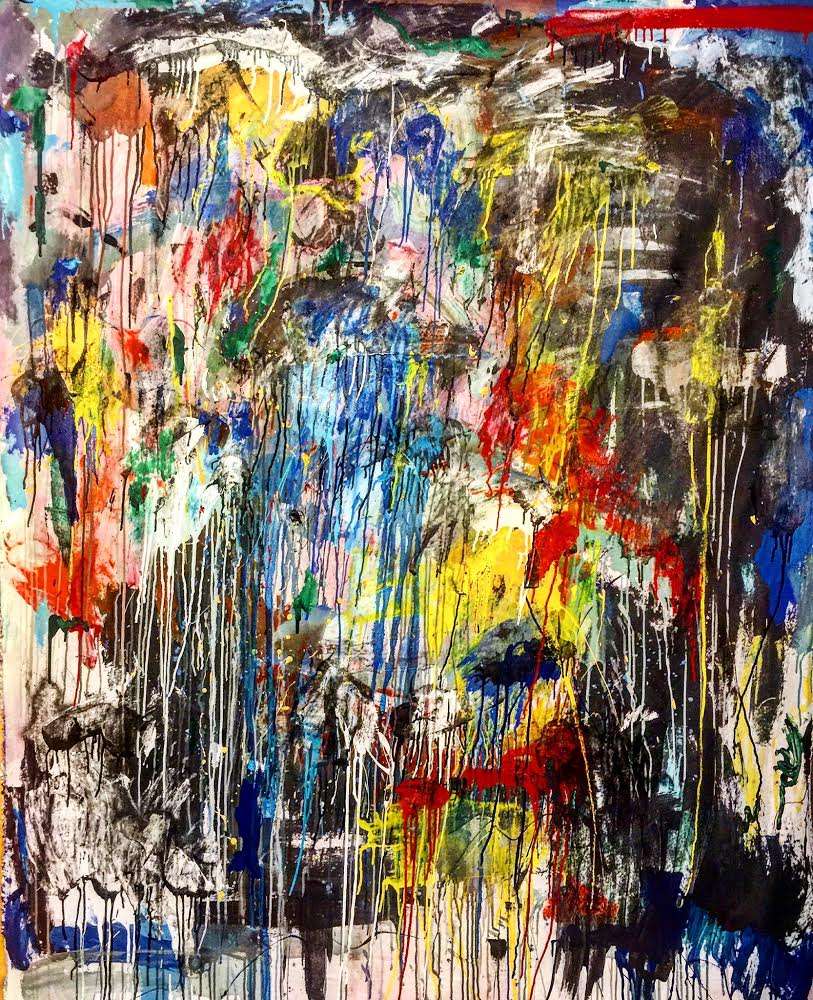 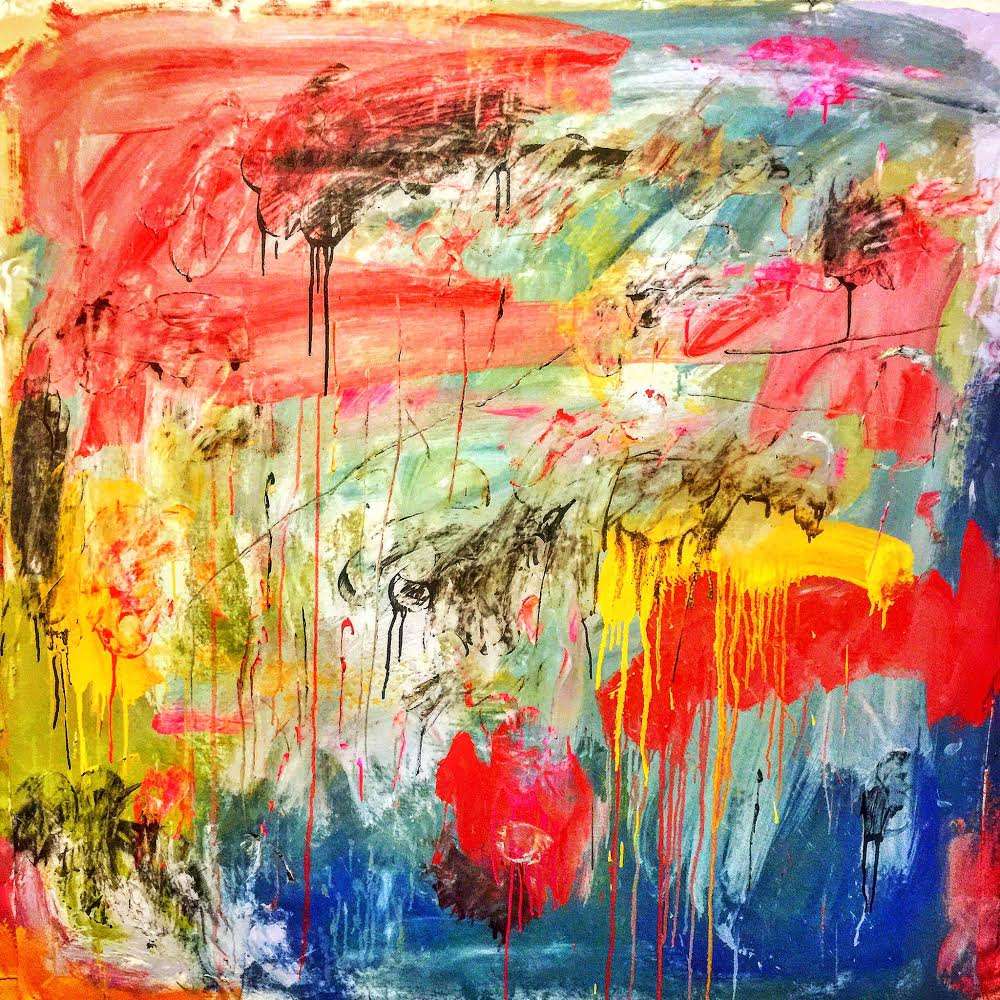 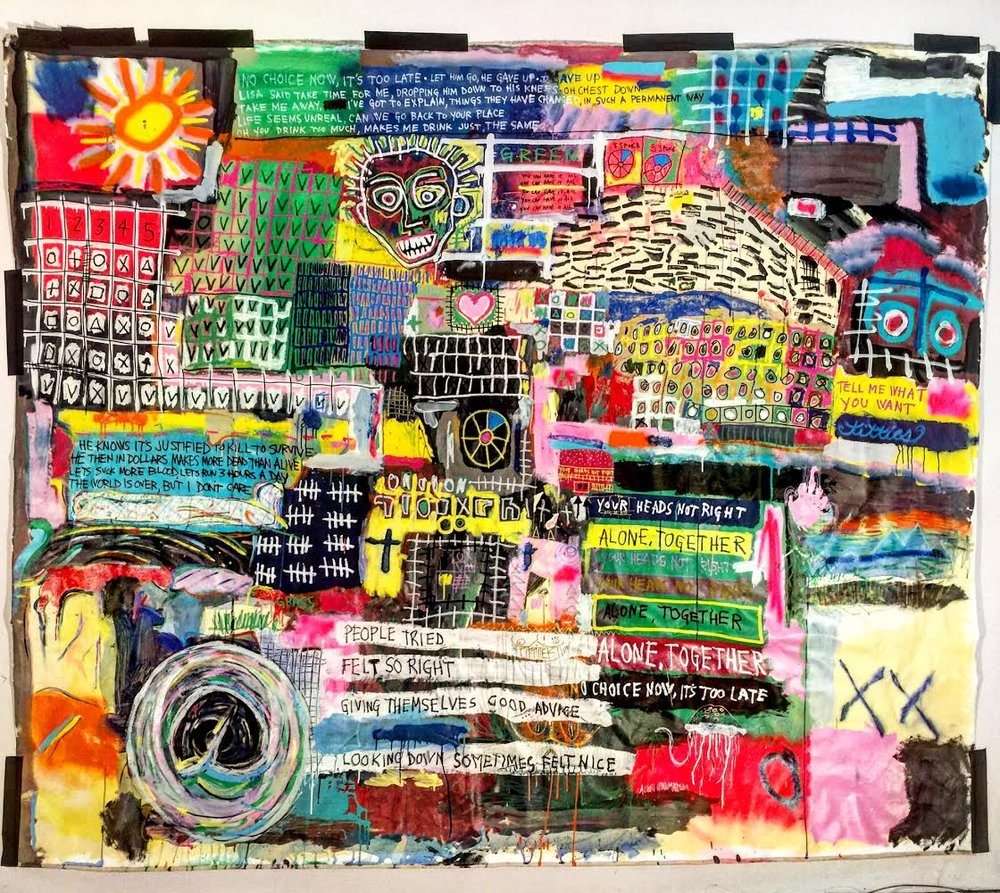 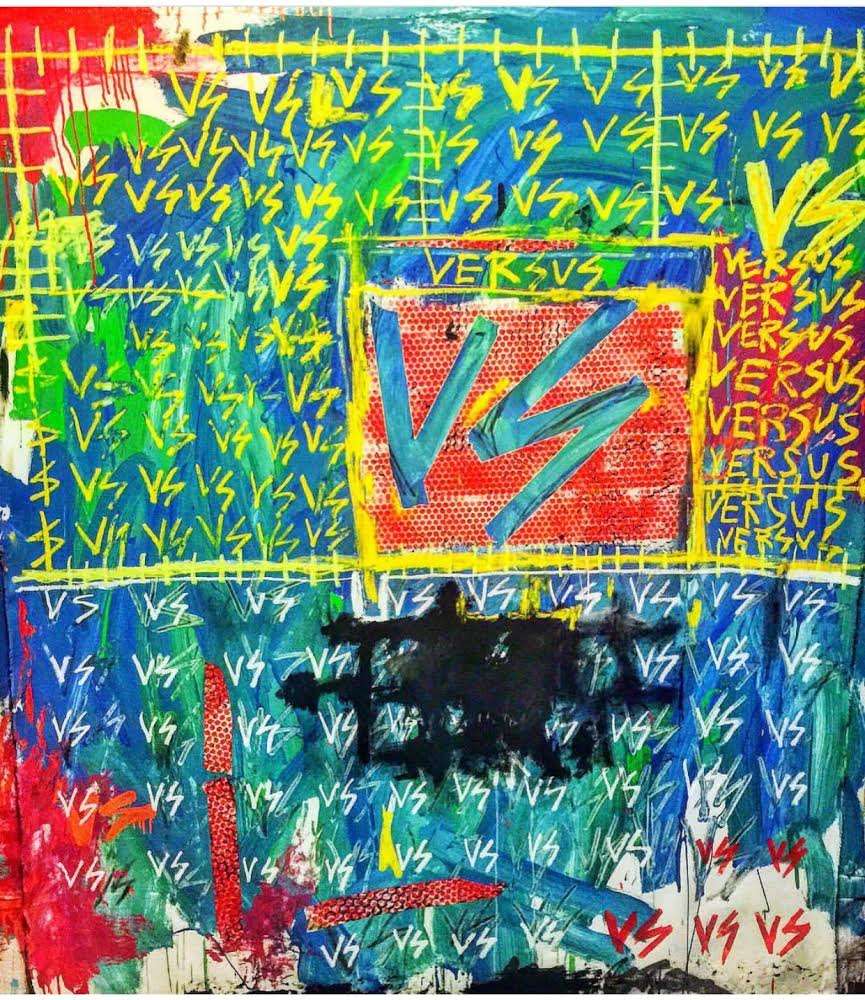 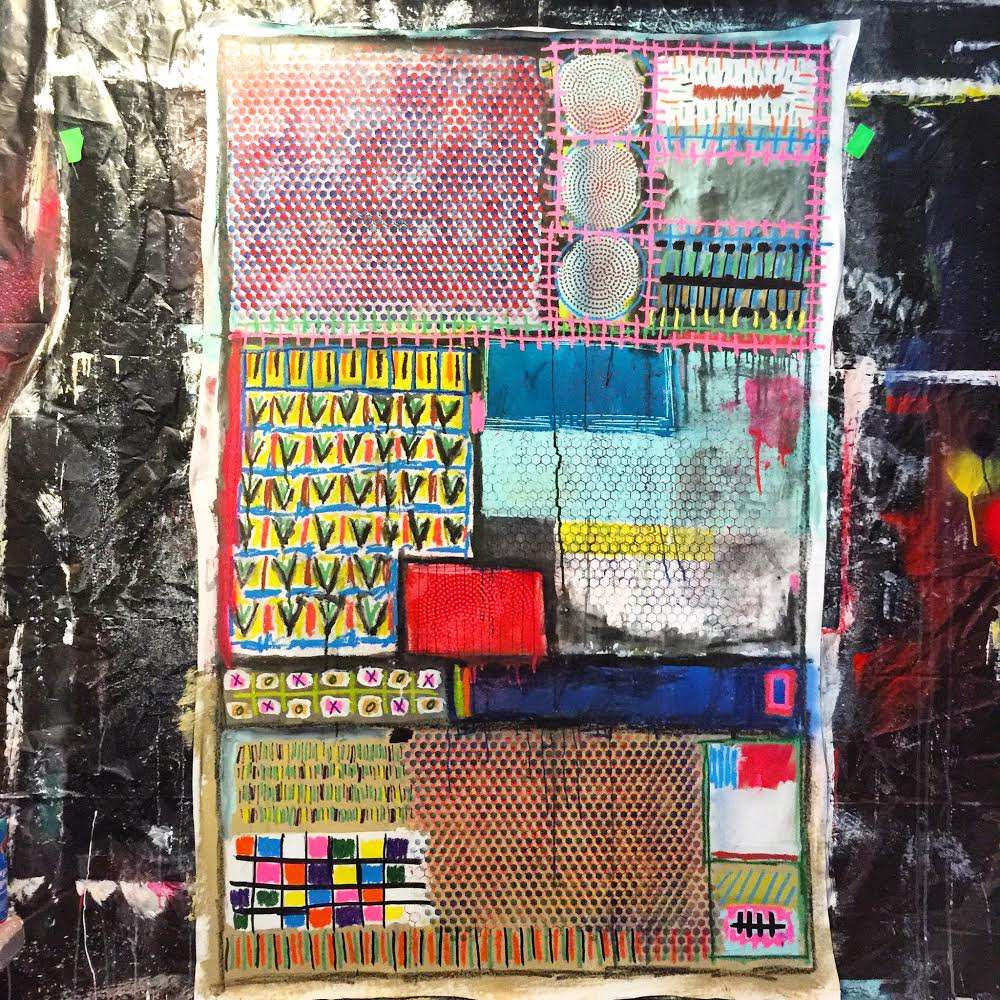 Inspired by midcentury and 70s/80s pop artists like Rauschenberg, Basquiat, and Warhol, self-taught artist Eddie Love experiments with a variety of media on canvas, emphasizing that mess can be beautiful, and the bigger the canvas, the bigger the statement. I love the quilt-like, abstracted compositions with blocks upon blocks of color, texture, and pattern.

YS: So you’re currently in Nashville, where are you from originally?

EL: I’m from Fayetteville, Arkansas. A progressive community of about 90,000 with a strong vision towards the future of what our state, or at least our region, Northwest Arkansas, can represent for the arts & culture of middle America.

What first led you to become interested in painting?

As far back as I can remember, I always considered myself an artist, before I even realized that was a thing a person could be. My papers in school were always filled with drawings, characters & doodles, without much concern for the day-to-day curriculum of public school. Since visual arts always came so naturally, I eventually developed interest in writing during middle school, trying my hand at a terrible novel, then evolving into screenplays.

Upon high school, that abstract desire had matured into another passion; architecture. With full intentions of college, studies consisted of a 3 year after-school program, 3 hours a day, 5 days a week. Though reaching the end of senior year, with auto-cad becoming the norm, I refused to let go of my pencil on paper ideals (plus math), and I realized architecture wasn’t my path.

The boring summer after high school was my real genesis of the person I am today. A buddy turned me on to graffiti – using small handmade stencils on utility boxes – spray paint became my go-to medium, which is still prevalent in my current work. Without any thought, other than I have always had a heavy hand & the childlike inclination, I deemed myself “MESS-1”. That small hobby evolved into what I do today.

What made you decide to pursue art more seriously?

I think the answer to that question would be a series of setbacks, decisions, & happenstance. Back in 2001, the same year I began painting, NYC rock band The Strokes released their debut album “IS THIS IT” in September, & upon discovering it, & becoming absolutely obsessed – something inside me said “Oh! Holy shit! I can do that too!” Those 33 minutes of listening and watching live videos of that band really changed my life & made me not only realize you can, but you should, do anything in life you want if you have talent, do it for the right reasons, work extremely hard and don’t listen to other people’s criticism disguised as advice. So over the next 2 years I lost 125 pounds, put together my first band and wrote my first album. I decided that being an artist/musician was the most important part of my identity and it is what I would do for the rest of my life.

By 2006 I had written two more batches of songs with two different songwriting friends, but couldn’t find my niche. Late 2006 I found a band called A Good Fight looking for a frontman. We crafted our sound & performance for a year & a half before we played in front of anyone, & it was worth it. We made quite a splash in the local and regional music scenes, winning numerous awards & contests that got us on some MTV shows & meetings in LA. We put out 2 pro studio albums by 2010 & were slowly recording our third full length album “The Kids Keep Asking For More” when sadly some inner band politics and whatnot derailed AGF in 2013, never finishing or releasing those songs.

I didn’t want to get into another band relationship right away, so I just focused all my energy & time on painting. 4 years later and it’s my defining characteristic.

It’s interesting that you are self-taught and are clearly experimenting with a few different styles. What are some of your major influences?

I get a lot of criticism/comparison for this, since some of my work has a direct correlation to his work, but my favourite artist by far is Jean-Michel Basquiat. Thing is is I was painting like that before I ever heard of him or knew what he did. Once I discovered him, it only gave me more confidence to pursue this dream/life.

Other than a few other artists: Warhol, Robert Rauschenburg, I’m influenced by all sorts of random things. Music & bands plays a big role in my creation method, & nowadays, the explore button on Instagram is my favourite place to find inspiration.

What are some the challenges you’ve encountered in pursuit of art as a career path?

Well like I said a second ago, the Basquiat comparison can be frustrating at times, and most of the time it’s a very immediate reaction from the viewer (which makes it easier to understand), but upon further inspection I hope they would see I have defined myself much more than that lazy comparison.

Other than that, getting galleries & curators to even respond to an email is insanely depressing & makes me second guess everything all the time. But that’s a fleeting feeling and I know they will come around eventually haha.

What has been the most rewarding part of it?

Just being confident in myself & the choices I made to where I am now. Even though I’m broke, I drive a 12 year old car with no air conditioning, I don’t own a house, etc. I also don’t have a “real job” that I hate, spending most of my life making someone else rich. I chose the path most don’t, and it is the best feeling in the world.

And also finishing a painting you don’t really know where it’s going & maybe aren’t even sure if it’s that good, but then all of a sudden you step back and it’s done and holy crap it’s excellent.

What would you consider your most exciting moment or biggest accomplishment so far?

Well I have very slowly built my brand & have clients all over the country now, so that to me is a great accomplishment.

How do you define “success” as an artist?

Pretty much a combo of my last few answers. I’m an optimistic & generally positive person – the fact that I wake up whenever I want and start painting, & don’t work for someone else that doesn’t give a shit about me (cuz I did that for several years too & it’s the worst) I would consider that a form of success. Now if I can start selling pieces for $100 grand, that would also be a nice success!! Haha

What is your studio like? How do you get started on a piece? Do you plan ahead or work spontaneously?

Since we just moved to Nashville, my studio right now is a small bedroom in our house, probably 12’x12′, very cluttered, very unorganized, but it works for now. Over the 15 years I have had several large studios, 2 car garages or bigger, and that is definitely a better work environment for me personally. But it’s big enuf I can work on 2 large pieces on the wall and one on an easel. So I’m still getting stuff done on the regular.

I hardly ever plan pieces ahead in the traditional sense, I have probably made 4 maybe 5 pieces over 15 years that I actually had a drawing or something like that for. Most of the time I just start with a base coat, usually white, and then just get lost in it. The only thing I have some sense of when I start is the basic color palette. Sometimes I have a few beers, sometimes I smoke a little, just whatever I’m feeling at the moment.

What do you feel that you need most as an artist?

If you could sit down for a beer with anyone (living or not) and talk about anything, who would it be and what would you want to chat about?

Man, just one?! That’s a tough one, are we talking like we would sit down in present day and discuss the craziness of now?! Jeez, so many: JFK, Einstein, Warhol, John Lennon, Abraham Lincoln… I don’t know if I can choose just one! 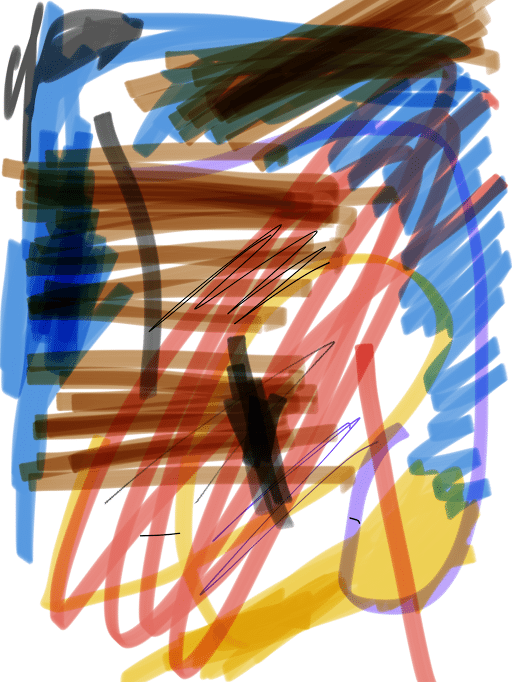 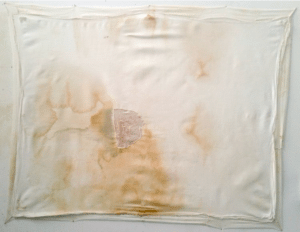 Annieo Klaas
YS: So, tell me a bit about yourself! You recently earned a…