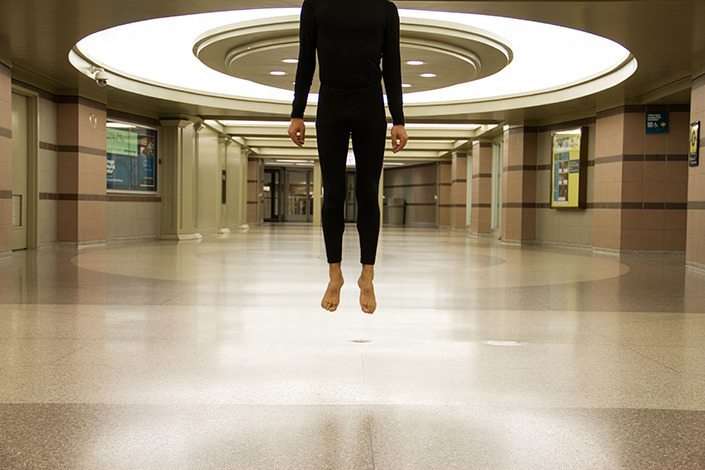 A recent MFA (performance) graduate from the School of the Art Institute in Chicago, Murat Adash addresses his and others’ relationship to space by configuring himself and performers, usually clad in black or dark colors, within the elements of place. He questions what it means to be present within that place, and the performances typically occur in the built environment, such as the city of Chicago in the pieces displayed here (Chicago Union Station below), reacting and being reacted to in both interior and exterior spaces.

Train platforms and busy city streets draw attention to the performers’ movements as much as the environment and other people move and react to them. The synchronized, slow-paced movements of the performers in Place is a Pause in Movement makes others in the space appear to be moving at a faster speed than usual. We begin to question which time frame is correct, or even desirable. He describes Place as ‘a set of circumstances where experience is a state of flux, which acknowledges place/space and body/self as a shifting and fragmented entity.’¹

I learned to like the performers’ matching monochrome outfits, which in large public spaces draws them together as much as it separates them from their surroundings. And in the above series of photographs, Vertical Resistance, the black leotard recalls mid-century avant-garde dance, reminiscent of Merce Cunningham leaping about in Hazel Larsen Archer’s photographs from Black Mountain College. There’s an unmistakable throwback quality to the idea of the dancer or performer in a simple black outfit, moving in deft and unusual ways through a space. Adash, in a sense, is a choreographer, bringing various performers together to perform often alongside, rather than with one another in pieces that reflect the human connection to our own constructed environments.

Check out the video clip below, and also check out the fantastic documentation of Adash’s work on his website, muratadash.com.

¹Place is a Pause in Movement 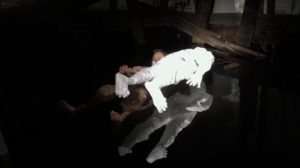