Who hasn’t experienced the small, mysterious magic of discovering old photographs? Even if they are of our friends or family, or our much younger selves, they always manage to produce more questions than answers. Where were they taken? Who was behind the camera? What were the people doing there? What are they wearing? And as (analog) film has found a renewed life within hipster and artistic circles (personally, I love that Instagram is full of pictures of people’s old cameras) the possibilities of combining current technology with out-of-date machines and processes multiply. Enter the slide projector compositions of Lawton Hall.

I met Lawton a couple of years ago when we both worked at a small art museum in Northeast Wisconsin. He had recently graduated from Lawrence University in Appleton and I had returned to Appleton a couple of years earlier after graduating from university myself. I got to know Lawton through weekly meetings and various projects at the museum, and learned that he was a composer and visual artist, although it wasn’t for some time that I actually saw anything he was working on. Then I saw this, (Talea et) Color for Myron Laskin: https://vimeo.com/51457008

(Talea et) Color for Myron Laskin is a manic audio-visual faux-isorhythmic ballet of the sounds, lights, and images produced by seven MIDI-controlled 35mm slide projectors. The inevitable jams, stuck slides, and other mechanical failures that occur when these instruments are pushed way beyond their intended purposes are an essential part of the performance and serve as a reminder of the fallibility of the technology that constructs and maintains our image-based reality.

I hadn’t seen anything quite like it before, so I was immediately intrigued. Lawton, currently based in Milwaukee, Wisconsin is about to take up a summer residency at the Wormfarm Institute and then in the fall is headed to Los Angeles to begin an MFA program at the California Institute of the Arts. I got in touch with him about his latest project, The Anthropocene, another slide-based work, and chatted a bit about his artistic process.

Kate: Who or what are your biggest creative influences?

Lawton: I try to be influenced by everything, all the time, and parse life into a series of artworks and soundscapes for myself. It sort of works. More specifically, the writings of James Tenney have been incredibly important to me. Tenney was a composted and music theorist (who taught at CalArts) and he built an approach to music theory that is based entirely upon the psychology of perception. That doesn’t sound like exciting stuff, but I come from essentially a classical music background, and classical music is an incredibly abstract medium that places an unhealthy emphasis on technical or acoustic minutiae. Tenney shifted the focus away from those individual sounds or technical details and onto the people who would actually be hearing those sounds. That shift in focus helped me to rearrange my thinking and was the first step toward putting my work into a larger context.

There are a few formal mentors I’ve had that have influenced my work. I spent two summers working with the composer Pauline Oliveros in upstate New York, and those were very formative times in my life. At Lawrence University, I studied with the collaborative photographers John Shimon and Julie Lindemann and they were, and continue to be influential.

There were several artists in the 60s and 70s who helped define “media art,” and many of them also worked with experimental music. Discovering Paul Sharits and Tony Conrad in particular helped me make the jump from working in a purely musical medium to working with visual materials. And recently I’ve been very inspired by the work of Oneohtrix Point Never (Daniel Lopatin) and have been watching the TV operas by Robert Ashley. I’ve been working through John and Alan Lomax collections of American folk songs and ballads and finding hymnals online. I’m trying to use this new Tumblr thing — new for me, I’m like 6 years late to this party — to post influences and sketches as they come along: GREATHORNED.tumblr.com

Are these images essentially slides for projection, or is the Tumblr page the artwork?

The images can be projected, and that’s their original medium, but I haven’t had the opportunity to make any sort of performance or installation out of them yet. I’m thinking of the Tumblr as its own artwork, and I’m really pleased with the results so far.

Where do the images come from and how do you choose them?

The images are all found slides that were taken by one photographer. There are recurring “characters” in the images (probably his family members) and subject matter in the original images, which I think helps make the project more cohesive. Each of these found-image pieces I’ve done have worked that way; I’ve used hundreds of slides that all belonged to a single photographer. The Tumblr medium is nice because it de-emphasizes the individual images and shifts the focus to the collection as a whole.

Because there are so many images and the process of altering them was fairly time-consuming, I chose them very quickly, and many of the decisions were based on gut responses. I tried to avoid posed portraits unless there was something particularly interesting about them (like a giant tire). Besides that, it was mostly a gut response about composition and color. I looked for images that were somehow strange or pithy, too, like this one: I’ve been attracted to outdated technology for a long time, so it’s hard to say. Several years Iago I became very interested in the artist Paul Sharits, and his film installations emphasize the material aspects of the image-making technology he uses (16mm film, mostly).

There’s definitely a reactionary aspect to my interest in old images and technology — it’s a nice respite from all the time spent in Internet-land, and I think it represents a nostalgic longing for tactility. It’s also very easy to find old photo equipment at thrift shops, etc. in Northeastern Wisconsin.

Is there a narrative attached to the way the images are presented?

Yes and no. I wanted to create designs that did represent pathways between images and possibly impose some narrative or structure onto the individual images themselves. The laser-cut graphics were designed separately from the found images, though, and this was intentional. I created patterns and designs that could interlock in various arrangements and my hope was that I could create a sort of aleatory, semi-random narrative by altering the photographs and juxtaposing them side by side.

There is no specific arrangement with the way they are presented (they are currently uploading at random every couple of hours), so the large-scale narrative (if there is one) is also semi-random.

Because randomness does play a role, how do you know when a piece is ‘working?’ Or when it’s finished? Do you ever find that some work never finishes?

I’ve conceived of these projects as continuous installations, even though Anthropocene only exists on Tumblr currently, so they never “finish” in some ways. There is a finite set of images, though. Most of my work is music, and music is essentially the practice of arranging and presenting sounds in time. When someone hears music, his or her brain subconsciously groups and organizes these sounds into meaningful structures (or doesn’t, and the music just sounds like random noise). Obviously, the choice of sounds and the way they are presented have an effect on how someone might perceive the music, but ultimately organization, or lack thereof, takes place in the mind of the listener.

With these continuous installation pieces, which are primarily visual but are still time-based artworks like music, I have less control over the large-scale presentation of the images than with the individual images themselves. A piece is “working” if the individual images allow themselves to the grouped and organized into larger perceptual structures, so that you can ideally approach and leave the piece at any point and still get a sense of structure, even though you are ultimately creating the structure for yourself.

That’s the long answer. The short answer is this: If it feels too random, it isn’t working, but it’s also not working if it feels too organized. It’s a balance.

What is art to you, or what impels you to create?

Art should probably be a verb. “See Jane art.” Even if it’s not a verb, it’s an ongoing practice and process.

How did you know that you wanted to pursue the arts formally?

I decided a long time ago to pursue music formally and I’m to sure it was even a conscious decision. Art game along later. I can’t imagine doing anything else.

The problem with being so committed to these things is realizing that a particular field or genre or media isn’t what you expected it to be, so I expand, adjust, or rearrange what I’m doing all the time and learn, or invent new ways of doing things, which can be a little exhausting, but it makes for an interesting life.

Check out Lawton’s work and keep up with his current projects (of which there are a number!) at lawtonhall.com.

All images courtesy of the artist. 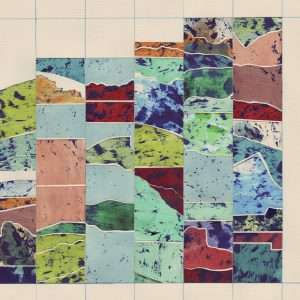