I happened across the work of  San Francisco-based artist Melissa Dickenson a couple of weeks ago, online, when I was checking out the alternative gallery space Alter Space, also in San Francisco. In September 2013 she exhibited the work she completed in a residency there. After checking out some of her other work, I was instantly taken by her latest series of painted works in which she explores the monoprint using acrylic paint and plastic film.

Thick acrylic paint dries to a plastic-like consistency and complements the other plastic material that she cuts and layers around it. Using the studio floor as a press, she transfers layers of paint onto the surface and once the paint has dried, layers thin films of plastic over the top. By ripping, folding, scrunching or cutting and applying to the surface, each plastic layer traps the last. The semi-translucent material allows her to explore various textures, networks, and colors of varying intensity and energy. The translucent layers of film, fragile in single pieces but resilient when layered, lend an ethereal quality to the smooth surfaces that encase their own textural and layered histories beneath.

Kate: You recently did a residency at San Francisco’s Alter Space–in a jail cell! What was it like working in that environment, and what did you learn from it?

Melissa: The Jail Cell was just an amazing experience. It was actually quite eerie being down in the jail cell, there are no windows or natural light. I could also hear all sorts of phantom sounds that felt as though someone was in the gallery up above, especially when I was working alone there at night. I learned to work quickly and efficiently, that is for sure! It was here that I started to use architecture to create 2-D prints or maps on plastic that define a 3-D space.

You completed your BFA on the east coast and your MFA on the west coast. Did opposite coasts influence your work in different ways?

I took ten years off from my undergrad and graduate degrees so I feel like my undergraduate days were so long ago. I grew up on the east coast, just outside of Boston and the mentality there is so different than the west coast, my work was defiantly tighter and more rigid when I lived there. California has been a tremendous influence on my work, especially living in San Francisco where there is such a surge of technology, it has made me think of new processes and materials.

Who or what are your creative influences?

Right now, landscape has a huge impact on me. I spend a vast amount of time collecting imagery along the California coastline. It gives me a vision when I go back to the studio. Even though my work isn’t seemingly landscape, I draw from the colors and patterns/light I see while traveling.

Barnett Newman has always been one of my favorite painters, and Samantha Thomas in LA, she makes amazing paintings and sculptures that are reminiscent of landscapes as well.

What is your process for beginning a work?

I am always working on several paintings at once, so each one influences the next. Usually I start with color, be it film or paint and then go from there, whether it be stretching, making prints, cutting and wrapping, depending on what a work is calling for.

How do you know a piece is ‘working?’

It is intuitive. There are plenty of pieces that I think don’t work, and I will set them aside and work on othe things until the answer comes to me.

When did you first start using plastic films and why?

I was in grad school when I first started using plastic. I had been making large pour paintings and was using plastic drop clothes to protect the floor. I didn’t think anything of it until the summer of 2011. I was in New York City for the summer and didn’t have much space to make the work, so I made small paper pieces and the imprints I made from those pieces on their protective plastic clothes were way more interesting than the papers themselves.

Up until recently, it seems that you primarily used plastic films and have started using paint. What made you start applying paint to the films?

In the Jail Cell I had a huge studio space to myself so I was able to let loose and not have to worry about my studio mate. I had been really wanting to “paint” again too, it was an itch that was ready to be scratched, I just needed the right environment to do it!

Melissa is currently working on an installation in the Texas Theater (the one where Lee Harvey Oswald was captured!), and is working in a space above the auditorium. There will be a video and works that are based on the architecture of that space. Keep up on all of the latest work and news from Melissa Dickenson on her website, melissadickenson.com.

All images courtesy of the artist. 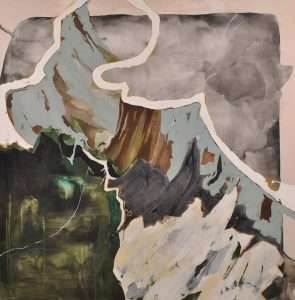