In the manner of a high school report, I’ll begin with the definition of ‘synergy’ from the OED: ‘n. The interaction or cooperation of two or more organizations, substances, or other agents to produce a combined effect greater than the sum of their separate effects.’ Ivan Gaete’s Synergic Clusters bring to mind astrophysics, star clusters, galaxies and constellations; a pulling-together of cosmic netting of imagined lines that connect the stars in the sky and ourselves to civilization’s long and varied associations with them. The stars have been seen, read, tracked, studied, connected and wished upon for thousands and thousands of years and they continue to dazzle and delight us with their infinite mysteries; the apparent paradox of a bunch of infinitesimal specks of colossal magnitude surrounding us.

The monochrome pieces that comprise Synergic Clusters, relatively small at only 14 x 14 inches, are delicately crafted with simple materials that demonstrate the capacity for texture, light and shadow to give us a sense of dimension. Through the holes in the vellum we are drawn into what we imagine is a universe, and perhaps not even ‘the’ universe, but a universe of the artist’s or our own devising. Some ancient myths associated the sky with the fabric of a giant tent through which millions of holes were punched through, creating the stars. Gaete’s use of line suggests constellations or connections between otherwise random, disorderly and separate entities, though gathered together in their randomness to create a sense of order. So many small, apparently random dots and lines, when gathered together so densely, build up a sort of pattern.

The texture of the vellum itself should not be overlooked. The gentle waves in the paper and the way it reflects and absorbs light suggests a depth and tactility to space, which we might otherwise associate with the emptiness of air. Smart use of contrast and shades of grey emphasize the texture and chaotic patterns that emerge. Though Gaete has been interested in drawing connecting dots and linear, chaotic connections for a few years, these particular pieces arrested my attention immediately, partly due to the layered effect of the vellum and the embossed features of the punctures. They maintain a certain simplicity while at the same time demonstrating the artist’s commitment to fine detail and craftsmanship in which complexity and chaos becomes simplicity and vice versa.

Many more of Ivan Gaete’s drawings can be found at ivangaete.com. 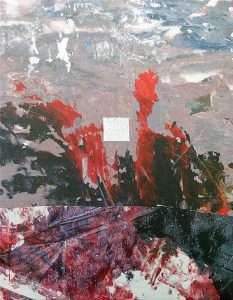